The Yak(uza)-Wing was another commission by the same commissioner as the Yakuza Z-95s. Since the Zeds were finished far ahead of schedule it was decided to add a Y-wing to the commission as well. However it had to be painted a bit differently to the Zeds due to the extreme lack of flat surfaces on a Y-wing. No cheating with water slide decals on this model! 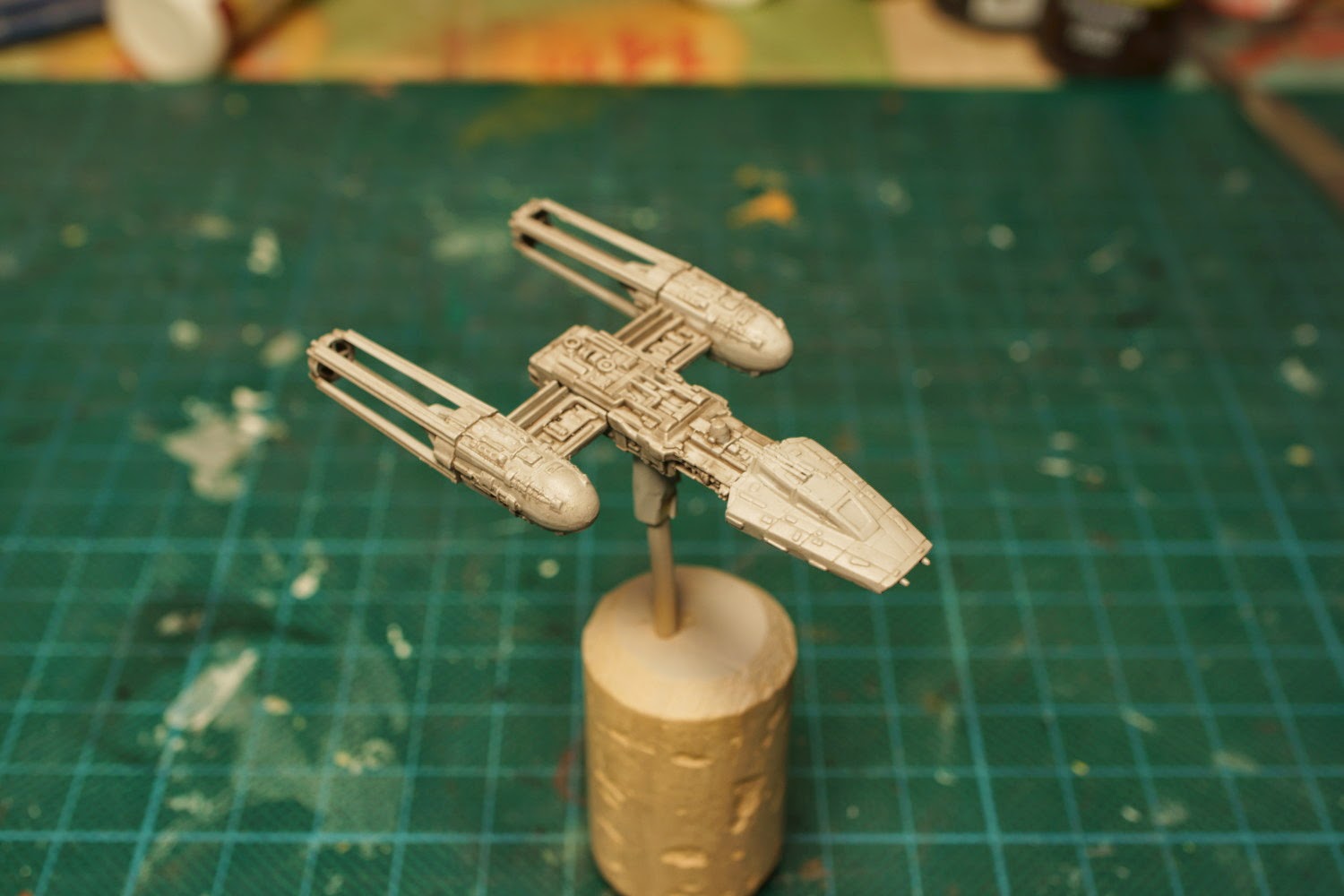 I decided to try something different with this Y-wing. After priming and a basecoat consisting of pure VGC Stonewall Grey I started experimenting with washes. Basically I wanted to try painting most of the model using only washes, and all the details on the Y-wing made it a perfect test subject. The first wash applied was plain Army Painter Dark Tone ink which I applied thinly over most of the model, taking care not to paint the nose. 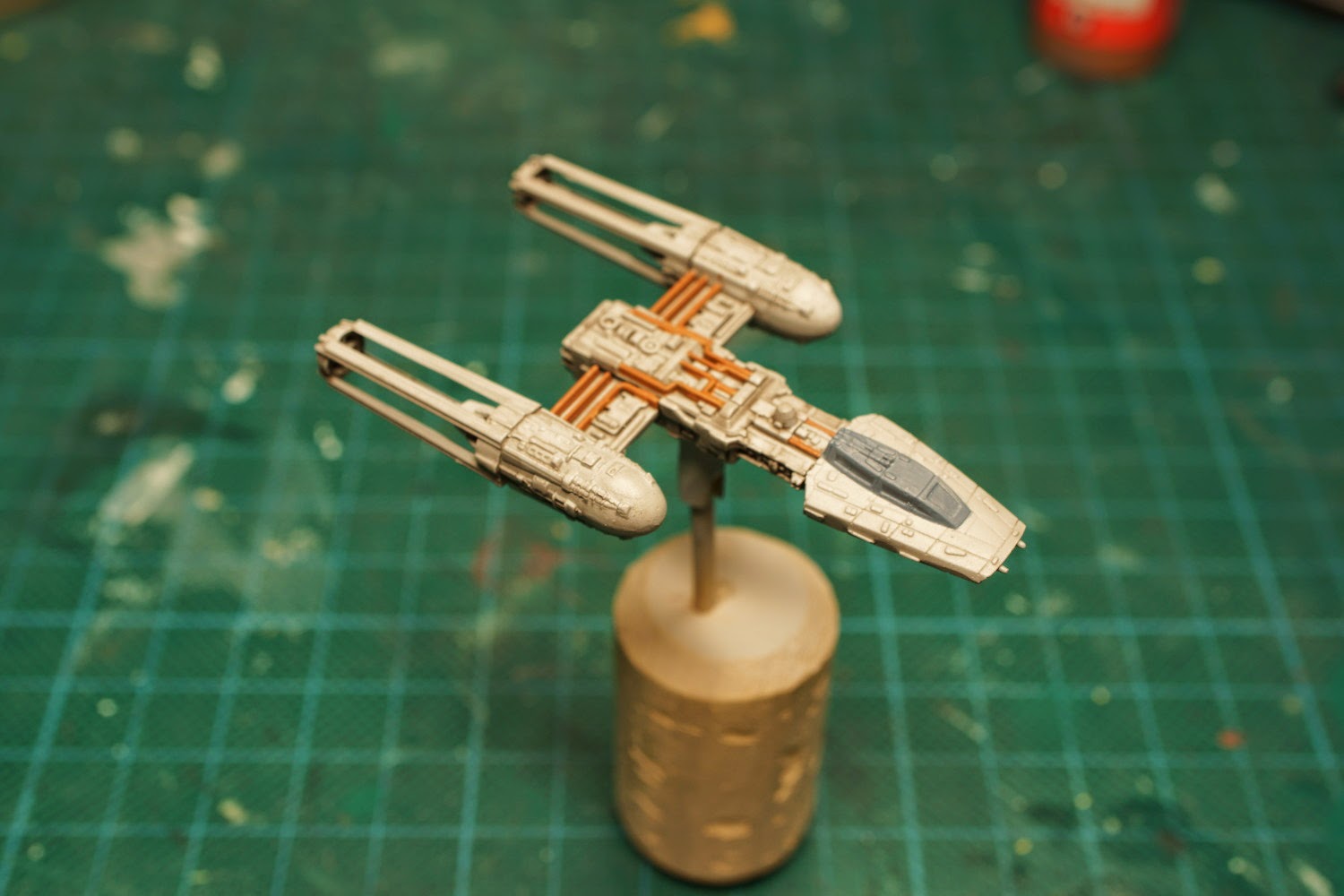 Next I picked out the cockpit with a 1:1 mix of VGC Cold Grey and GW The Fang and the pipes/conduits with VGC Beasty Brown. I should have done this before starting the washing process but it didn't really matter as many more layers of wash was waiting to be painted. 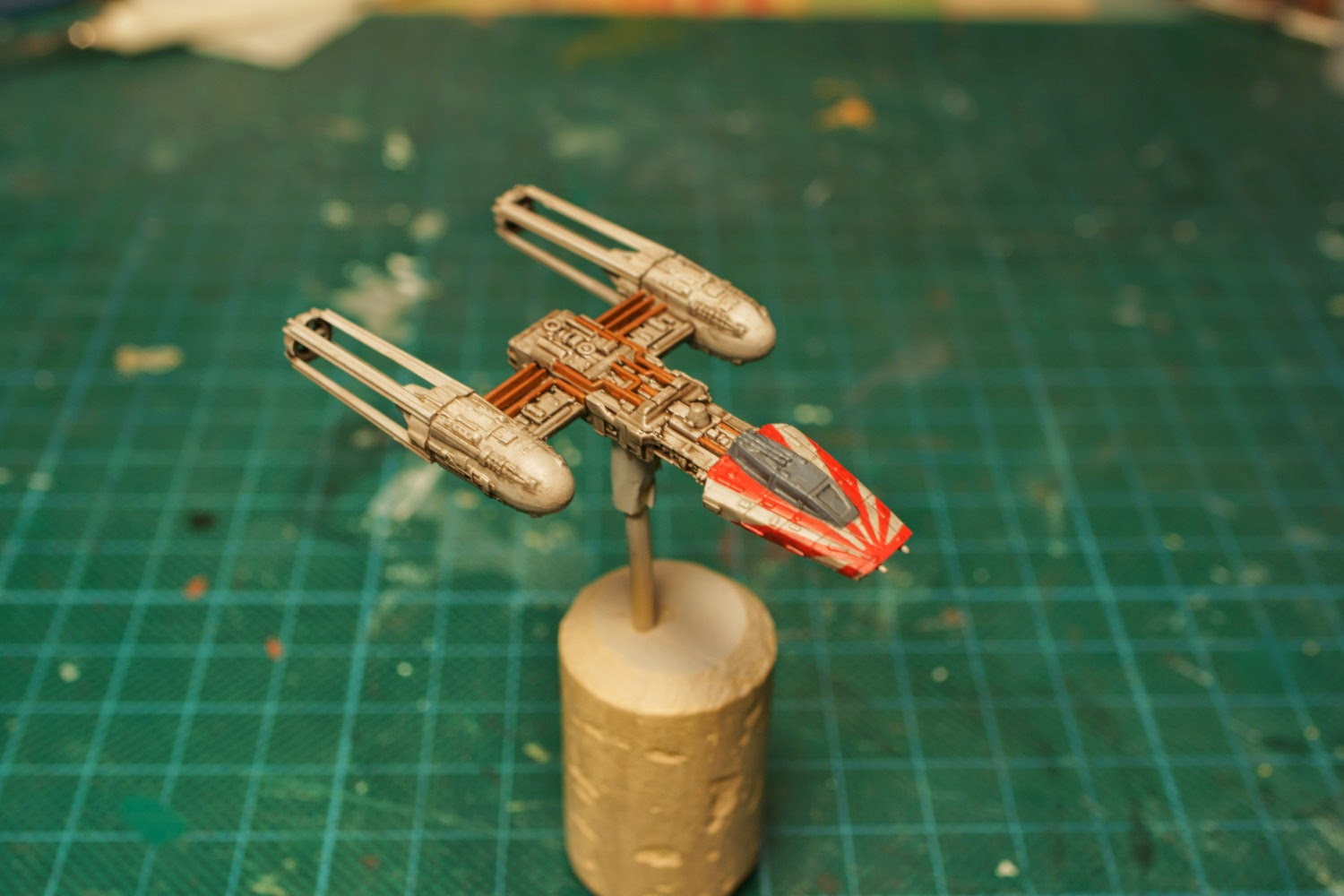 I actually don't remember exactly how many coats of wash I applied nor do I remember the order (should have written it down) but I think it was something like this. Of course when I write 'thin coat' below, I mean really thin, making sure the entire time that the wash didn't pool unevenly.

Nose:
Engine Pods:
Main body:
Also of note is that I painted the nose motif, in this case a version of the Japanese rising sun flag, using a 2:1 of VGC Gory Red and Bloody Red. It was decided to make it offset to the right, rather than have it placed in the middle of the nose. I also let the motif wrap around the sides of the nose to make it more visible and give it greater impact. 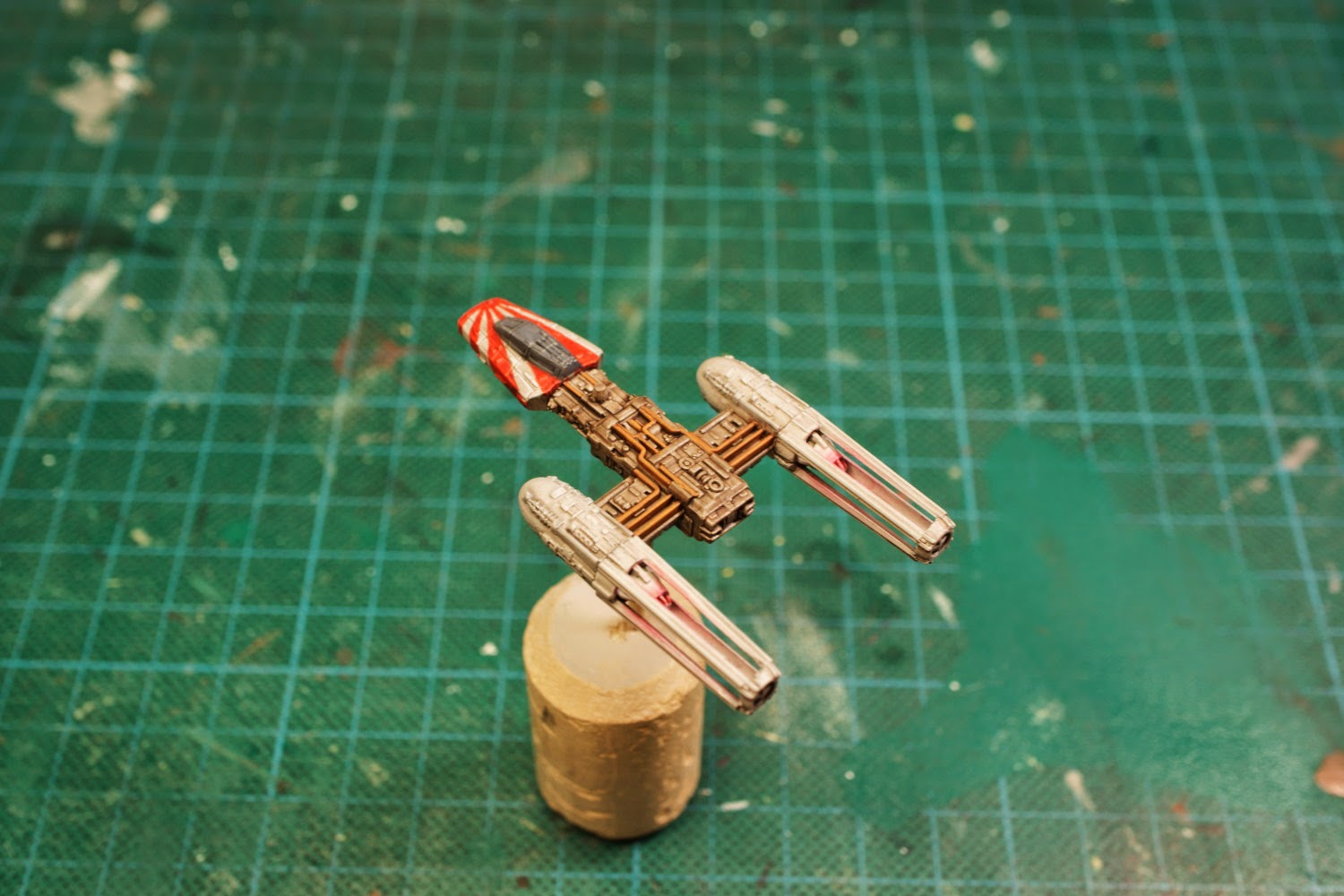 A very specific demand from the commissioner was glow coming from the engines. This is called Object Source Lightning, abbreviated OSL, and it is a very advanced technique. At its most basic it can be described as painting something to make it look like an actual light has been built into the model and this includes light reflecting off other surfaces. It's something I haven't done much of but looking back at this attempt I must say that I'm pleased with the result. 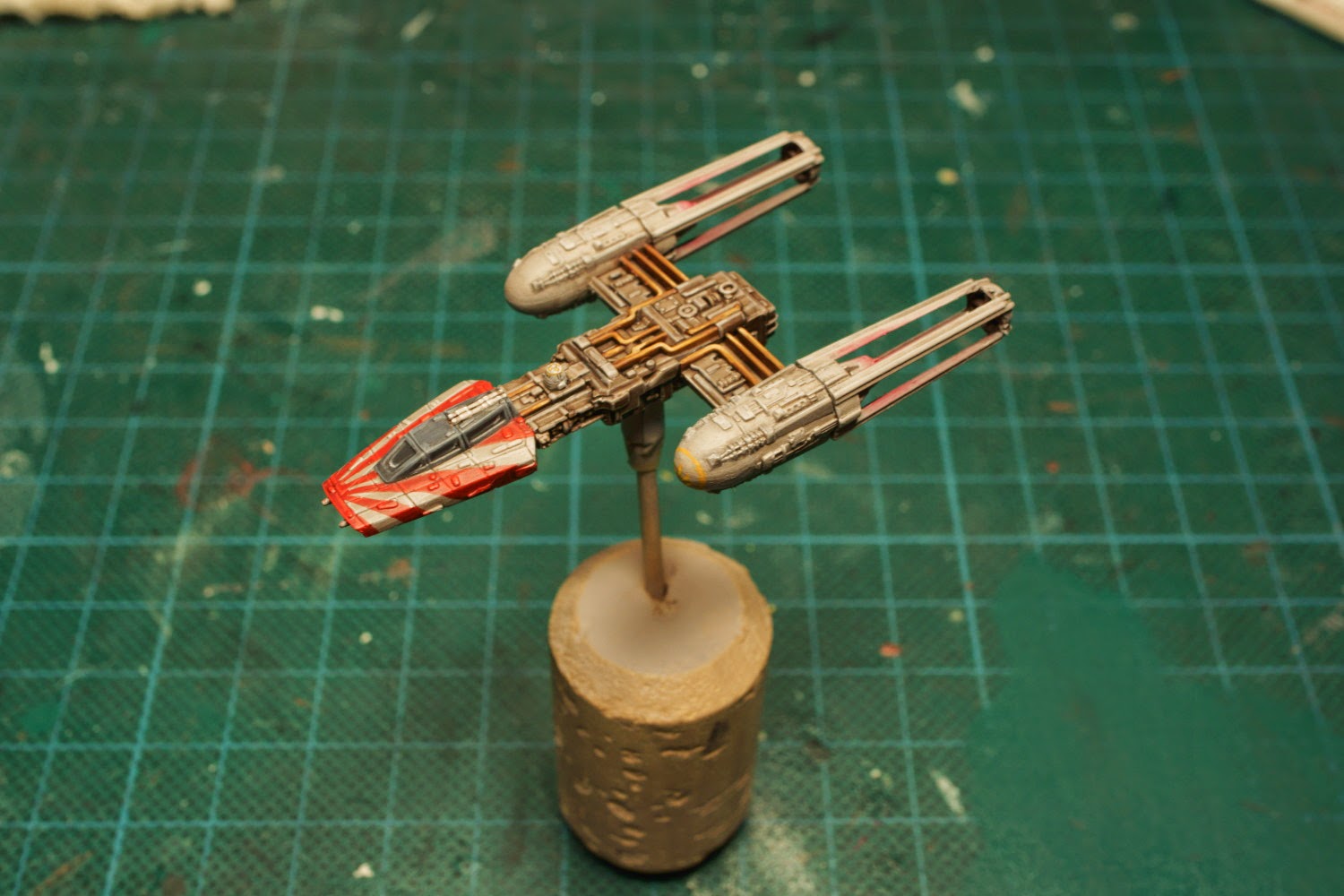 With the washing done I could start the highlighting. First I drybrushed the basecoat on the engine pods to make the shading a bit softer which was immediately followed by another, lighter, drybrush of  VGC Dead White to bring out the details.  A notable addition at this stage was the Lotus symbol on the tip of the left engine pod. Just like the Z-95s this was intended to unify all the scum ships, kind of a nationality symbol, although in this case probably the symbol of a crime lord. I couldn't cheat with a waterslide decal so I carefully painted the motif using VGC Plague Brown which was highlighted with P3 Cygnus Yellow.

The first highlight on the main body was a 2:2:1 mix of Cold Grey, Fortress Grey and VMC Chocolate Brown. For the second highlight I removed the Chocolate Brown from the mix and only painted the most protruding edges. The conduits on the other hand was first painted with the basecoat and then I gradually mixed in VGC Khaki for the highlights with some Plague Brown added into the mix for the final stages. 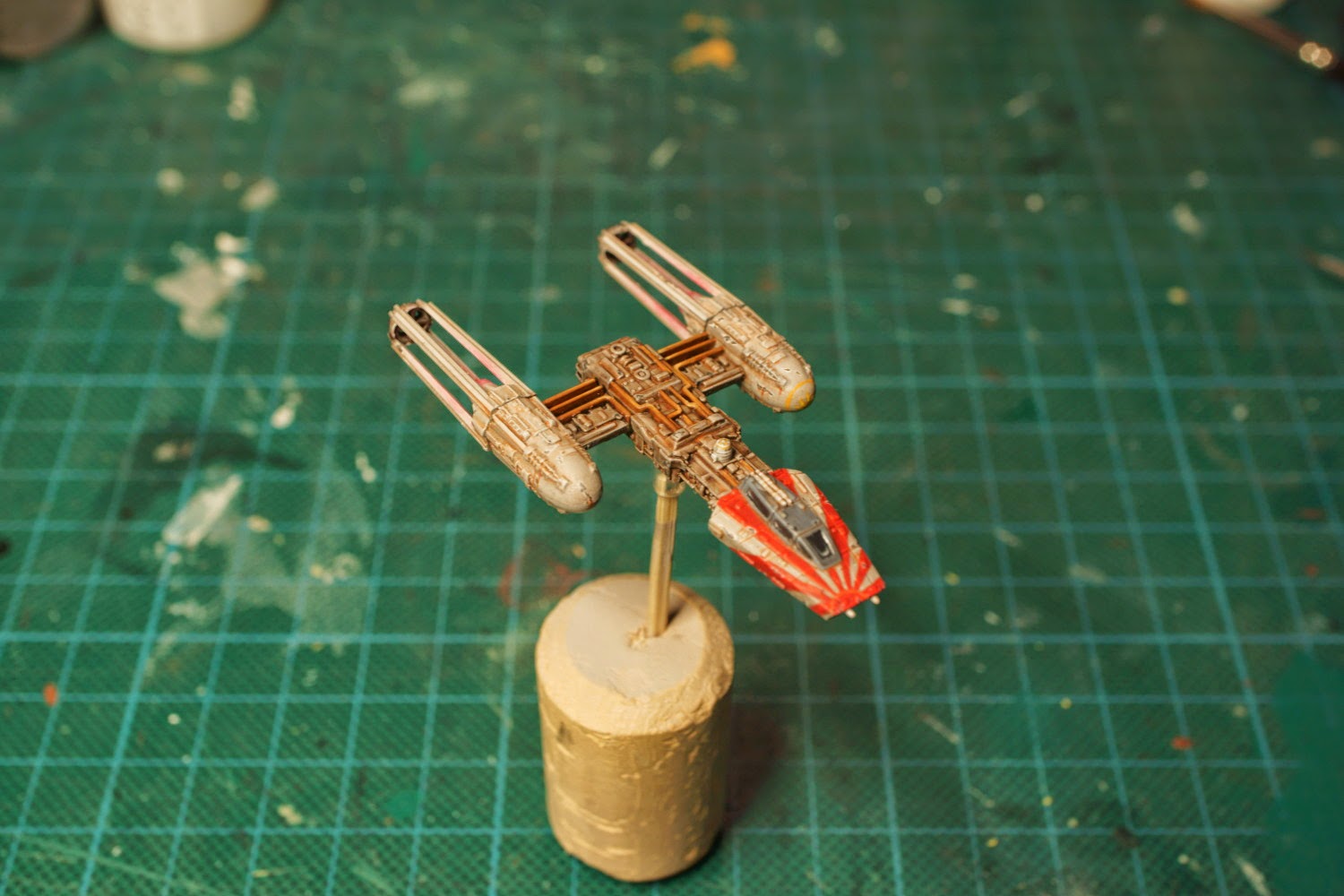 As usual, the ship was chipped and rusted using my normal methods. Lots of random chips using the main highlight colour for that particular area and then German Grey filled into the chip, while heavily thinned out VGC Parasite Brown was used for the rust. I had to be a bit more careful with the chips this time however. This is a very crowded model, with details all over the place. If the chips are painted without some careful consideration they can almost disappear, together with the rest of the details.

Of note is the astromech, which I painted as the unique salvaged astromech called 'Genius'. Many painters lament that eyes on Warhammer models hard to paint properly as it's amongst the smallest detail they need to paint. Pah! Eyes are a breeze in comparison to painting an astromech at scale 1/270! And that's my word of wisdom for the day.