Now that both ships are finished I can publish the paint guide for them. Also of note, repainting will slow down the coming months as I'm about to undertake a rather large scratchbuild... As I wanted the ships to be dark and menacing I primed both with black primer and basecoated them with a 1:3 mix of AP Matt Black and VMC Air German Grey. As can be seen from the picture above, I removed both mandibles/claws to make the painting easier. 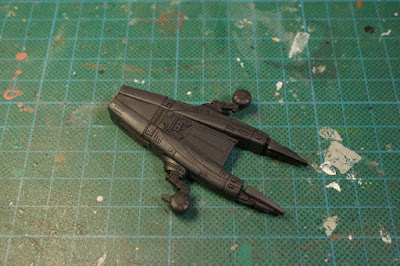 I gave models a coat of gloss varnish in preparation for the shading step. For the shade I made a wash using black oil paint. When it had dried for an hour or two I removed most of the excess wash using cotton swabs/q-tips. With the shading step finished, I left the oil to dry overnight and later sprayed a layer of matte varnish to seal the paint. 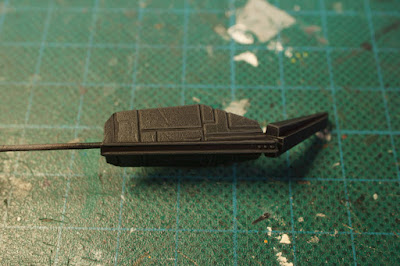 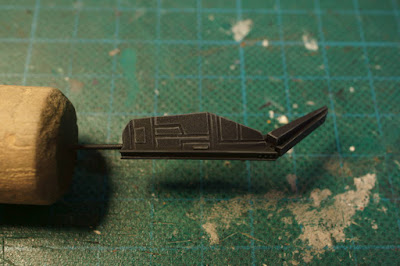 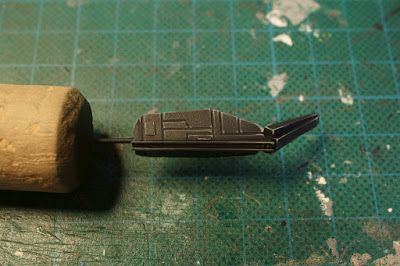 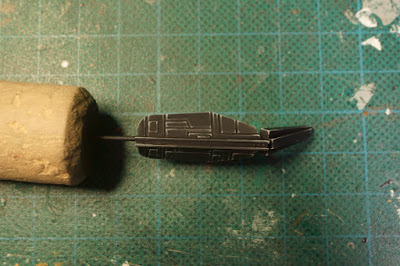 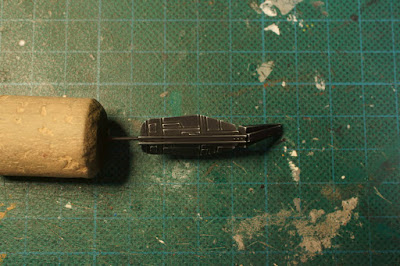 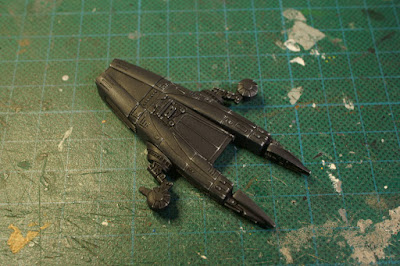 The highlighting was done in five steps. First, every raised area was painted with pure VMC German Grey. The second layer used a 1:1 mix VGC Cold Grey and German Grey, though this was applied more sparingly. The third highlight used a 3:1 mix of Cold Grey and VGC Stonewall Grey, which I mostly only painted on the edges of any panels and/or details.

The fourth layer was pure Stonewall Grey and was almost only applied to the most raised areas. The fifth and final step used pure AP Matt White, which I basically painted as small dots on the very leading edge of the panels and details.

Also of importance was how I highlighted the softer/rounder edges the ships possess. I used the same mixes as mentioned above though applied as many thin glazes to give them a smoother appearance. I think that I might have been too succesful, as the highlight is so smooth in places that it can sometimes be disregarded as normal light catching on the corners! The cockpit windows, the middle of the engine and some of the vents (I'm not sure exactly what to call them) near the engine was picked out with VGC Imperial Blue. The windows were then shaded with Dark Tone ink and when dry, I reapplied the starting colour, taking care to leave the wash visible in the recesses close to the window frames. 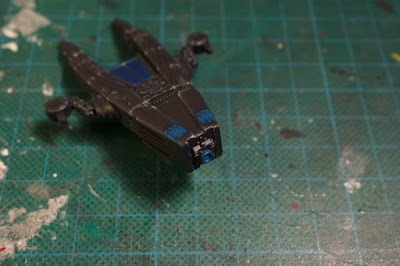 To get the blue glow I started with several thin glazes of old Citadel Asurmen Blue. To this I later added some Imperial Blue and Vallejo Glaze medium and continued to slowly build up the glow. For the final stages I switched to Imperial Blue mixed with a little VGC Magic Blue and some additional Glaze medium. This mix was also painted inside the vents and as highlight to the vent edges. 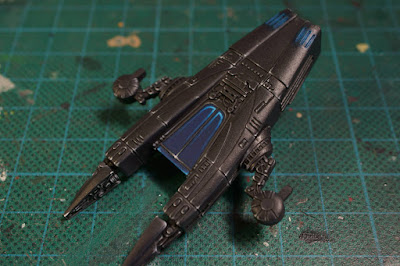 The reflection on the cockpit windows was built up using Imperial Blue that I gradually added small amounts of Magic Blue to. For the brightest part of the reflection I added some Matt White to the mix. After varnishing the model I painted the canopy with a few layers of gloss varnish to give it a proper shine. 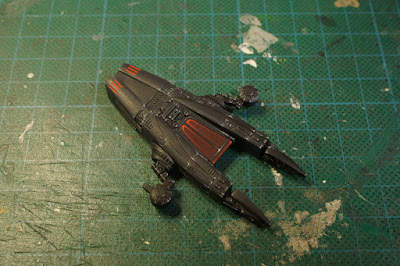 The Red Bro was mostly painted the same as the Blue Bro, with the obvious exception of the red detailing instead of blue. The base colour for the windows was VGC Scarlett Red with a small amount of Matt Black added (about a 6 or 7:1 mix). The reflection was built up using Scarlett Red that I gradually added small amounts of VGC Bloody Red to.

The vents and middle of the engine was painted with Scarlett Red with Bloody Red painted in the middle very centre of the vents and engine. The glow used the same process as for the Blue Bro, only using AP Red Tone ink, Scarlett Red and Bloody Red.