Lately, all I've had on on my mind is Fantasy Flight Games Star Wars: X-Wing miniatures game. The game is just so damned good! Of course, me being me, meant I couldn't very well leave the miniatures well alone. No, of course not! Gotta paint them properly! So that's what I have done. Or at the very least tried it on one model, more specifically a Y-Wing.

Normally, on something small like this (I think the scale is 1/270), painting every detail isn't terribly important since you can't see them properly. No use painting something that can only be seen under a microscope. However, as this was very much an experiment I decided early on the I should treat the model as if it were of a more conventional size.

First I stripped the paint by letting the model sit for a couple of hours in a bath of T-Röd. T-Röd or rather T-Red in English is a well known Swedish methylated spirit that can be used for a multitude of purposes and one of those purposes is stripping acrylic paint. Normally this would be an easy job but this time I had to vigorously clean the model several times with an old toothbrush before I was happy with the result. Lesson learned from this was that the factory paint does not need to be removed since it hard and resistant and is therefore a good primer. Second on the agenda was removing mould lines and leftover glue. After that I could finally start painting. Please note the this is not a proper paint guide as I didn't memorize every paint mix or took photos of every step. 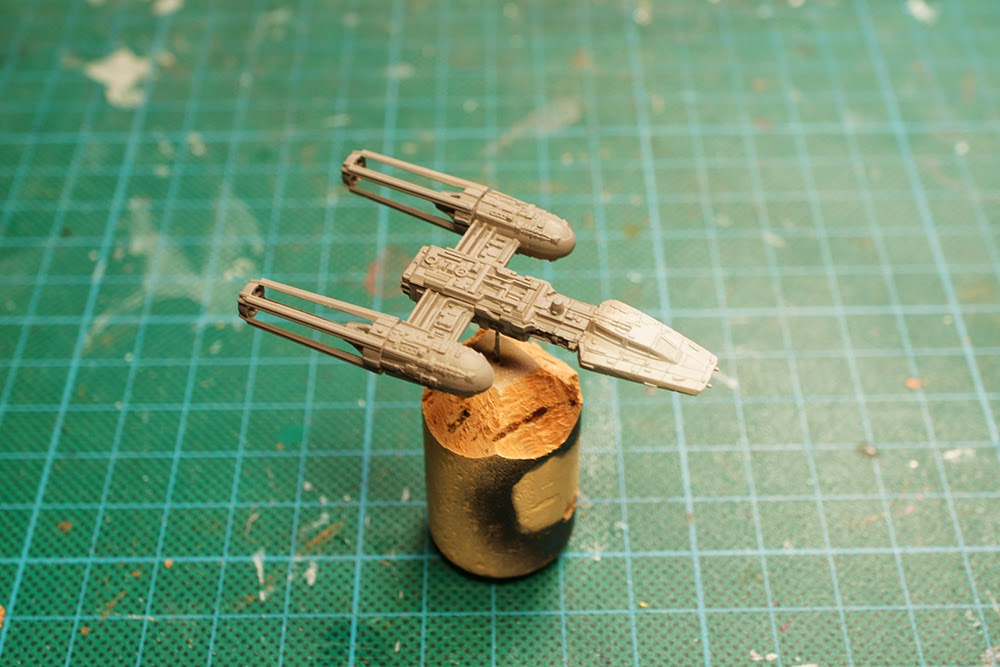 Primer went on first in the form of Vallejo USN Light Ghost Grey (It's the only greyish primer I have for the moment). This was followed by a mix of Vallejo Chocolate Brown and Vallejo Cold Grey on everything but the front. 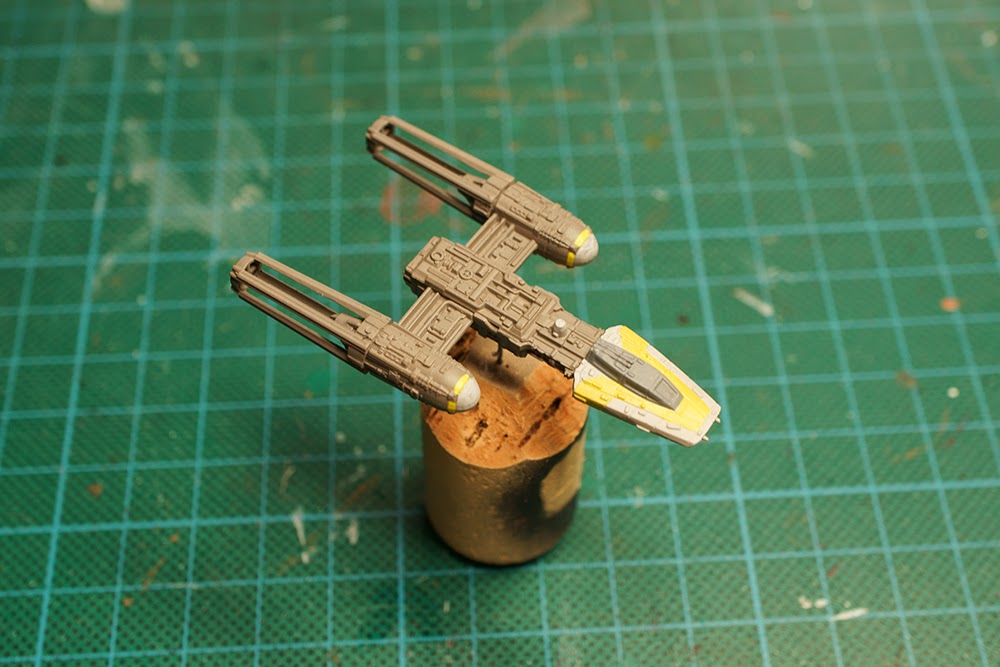 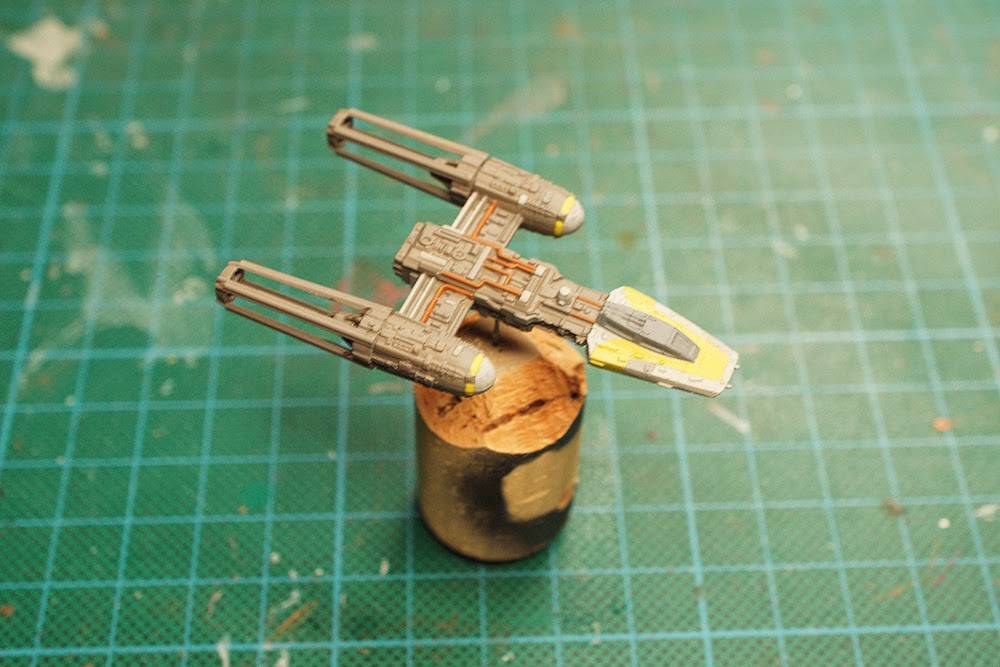 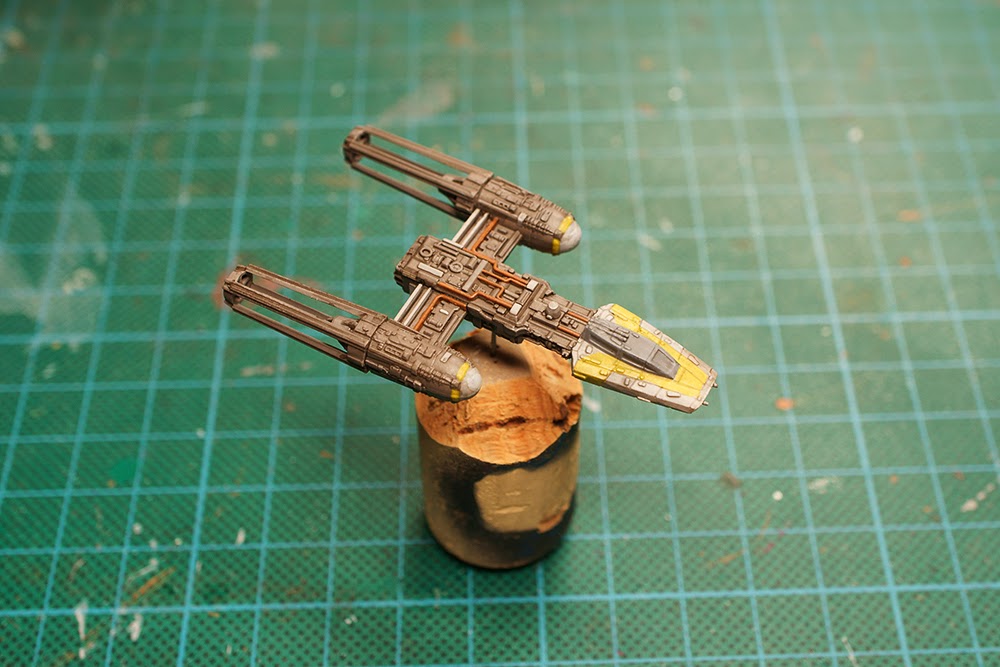 Next I applied the other base colours in the form of Vallejo Stonewall Grey on the 'head', the R-unit and the front of the engine pods, a mix of Cold Grey and GW The Fang on the cockpit and finally P3 Cygnus Yellow as stripes on the engine pods and the 'head'. Several of the pipes (Not sure exactly what they are) were picked out with Vallejo Beasty Brown and several small items, panels and details got painted with differing coats of grey to give the Y-Wing that mismatched, patched and repaired look. Finally I could wash the entire thing with a mix of Army painter Strong tone ink and Dark tone ink. 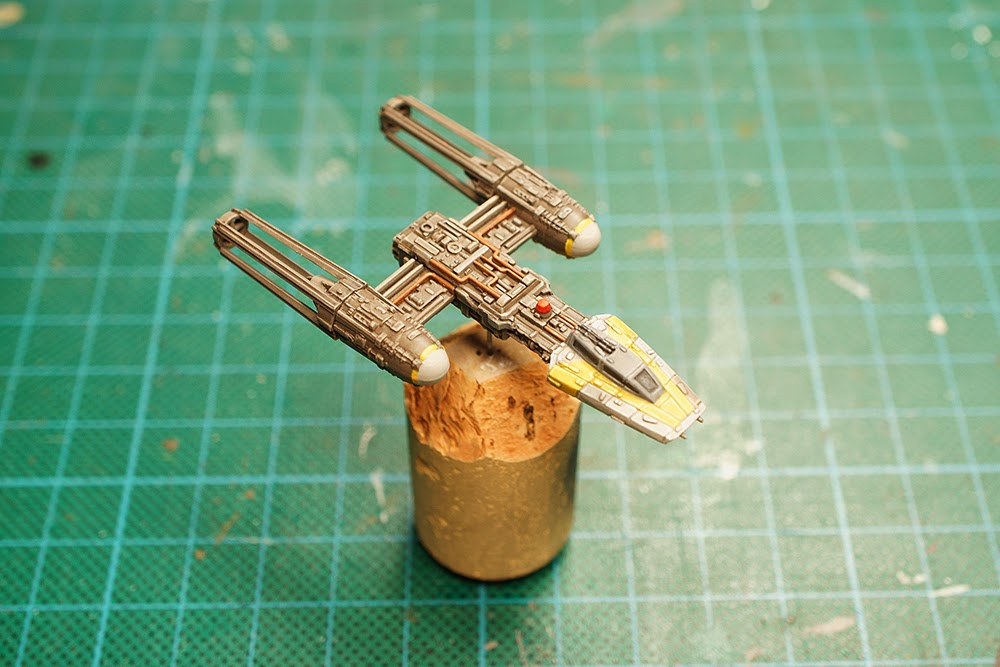 I applied the base colours again to remove areas where the wash had pooled after that I started highlighting. Now you need to understand the I went fairly overboard with the highlighting stage. As stated previously, a small model like this doesn't need to have every detail picked out. Insane that I am however, almost everything got it's proper highlight and yes that includes the droid. 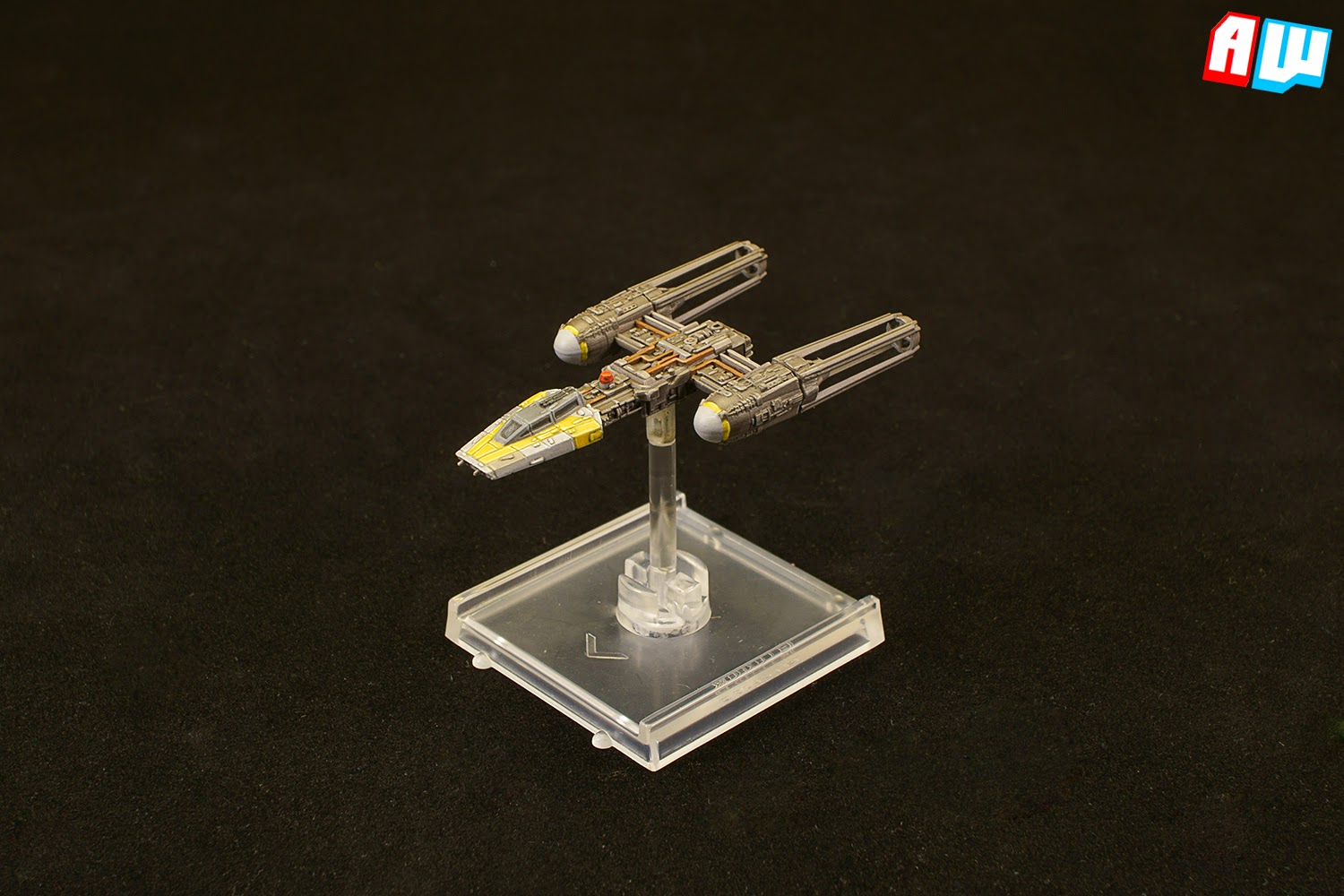 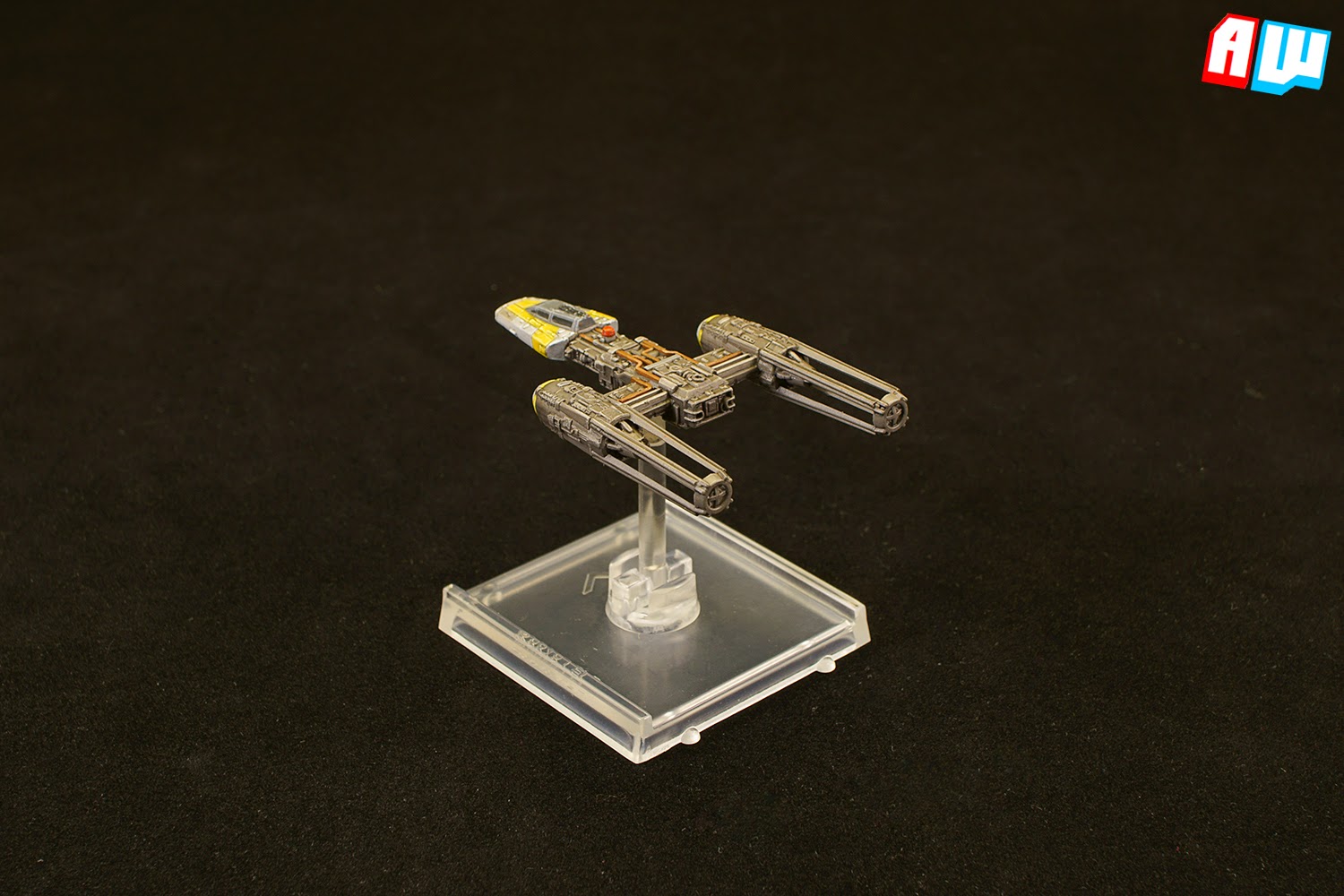 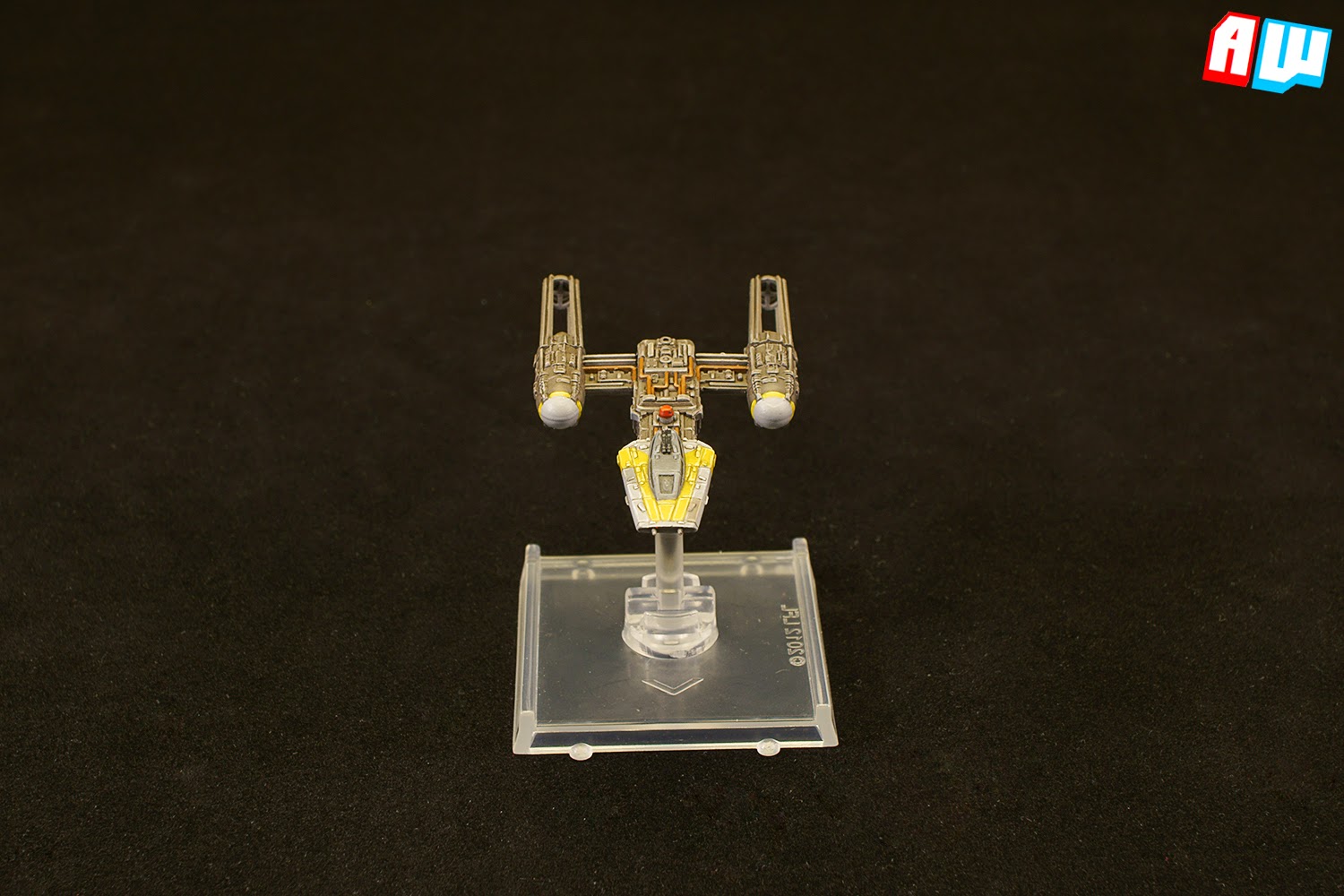 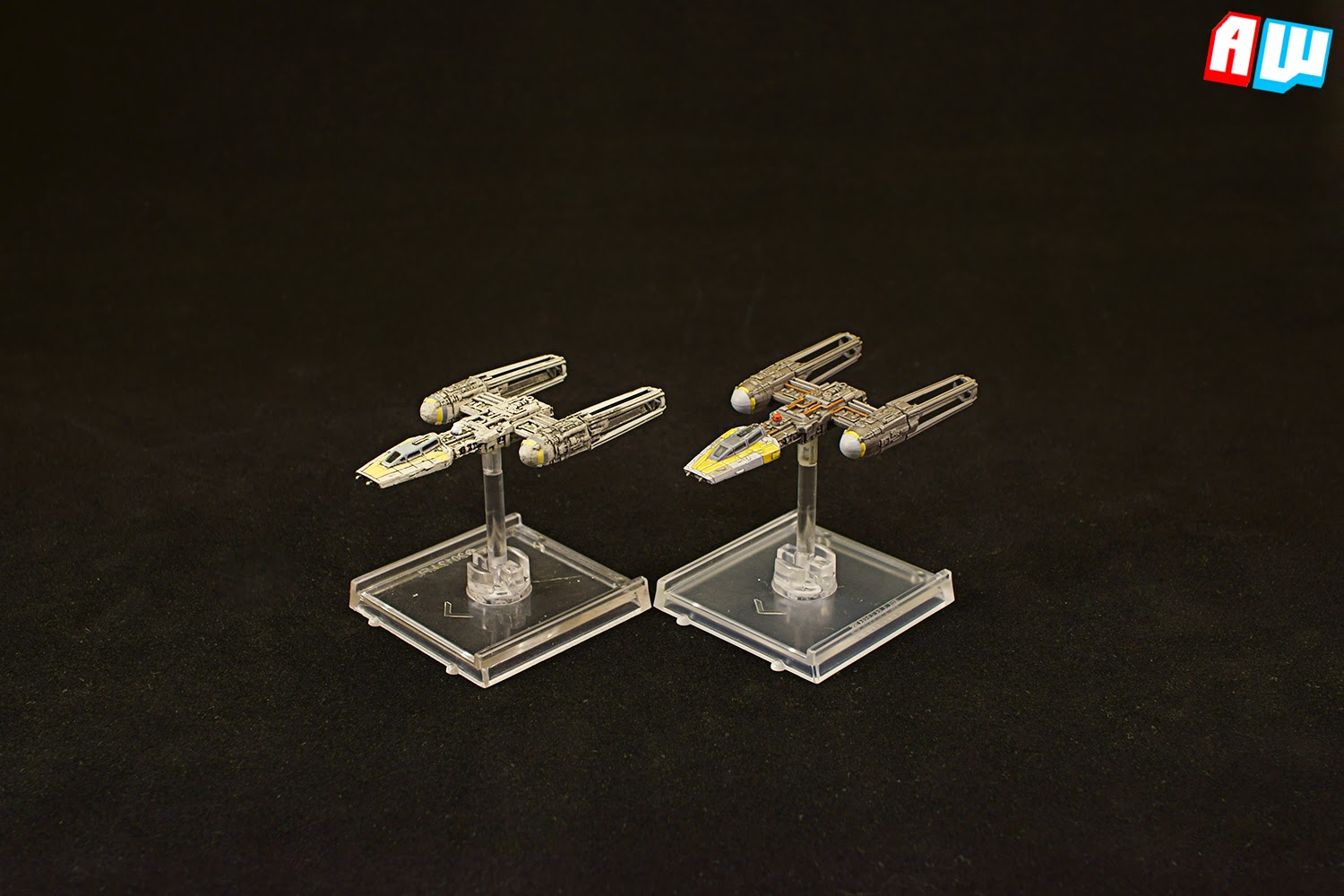 I can't say that I am completely happy with the result. Yes from a technical stand point, the model is well painted but I didn't arrive at quite the result I wanted. For instance the factory paint does a far better job of making the model look dirty and I'm not quite sure I'm satisfied with some of the colours I used. Also, a good deal of the time I put into painting details is wasted on the playfield since, as stated before, you can barely see them. Oh well, a useful experiment if nothing else.