Time sure flies when you are a lazy bum. Anyway, it took some time but I can finally present how I painted the Scum & Villany Yakuza Z-95s.

As I explained earlier when I published the pictures of the finished models, the commissioner wanted all ships to have some kind of Japanese motif on each ship. In the end we decided on a Kitsune, Sakura tree branch and a Japanese Dragon. To unite the ships while still maintaining the unique livery, it was decided to paint a lotus blossom symbol on top of the left wing of each ship. Of course, as I will show you later I decided not to actually paint the symbols but 'cheat'. 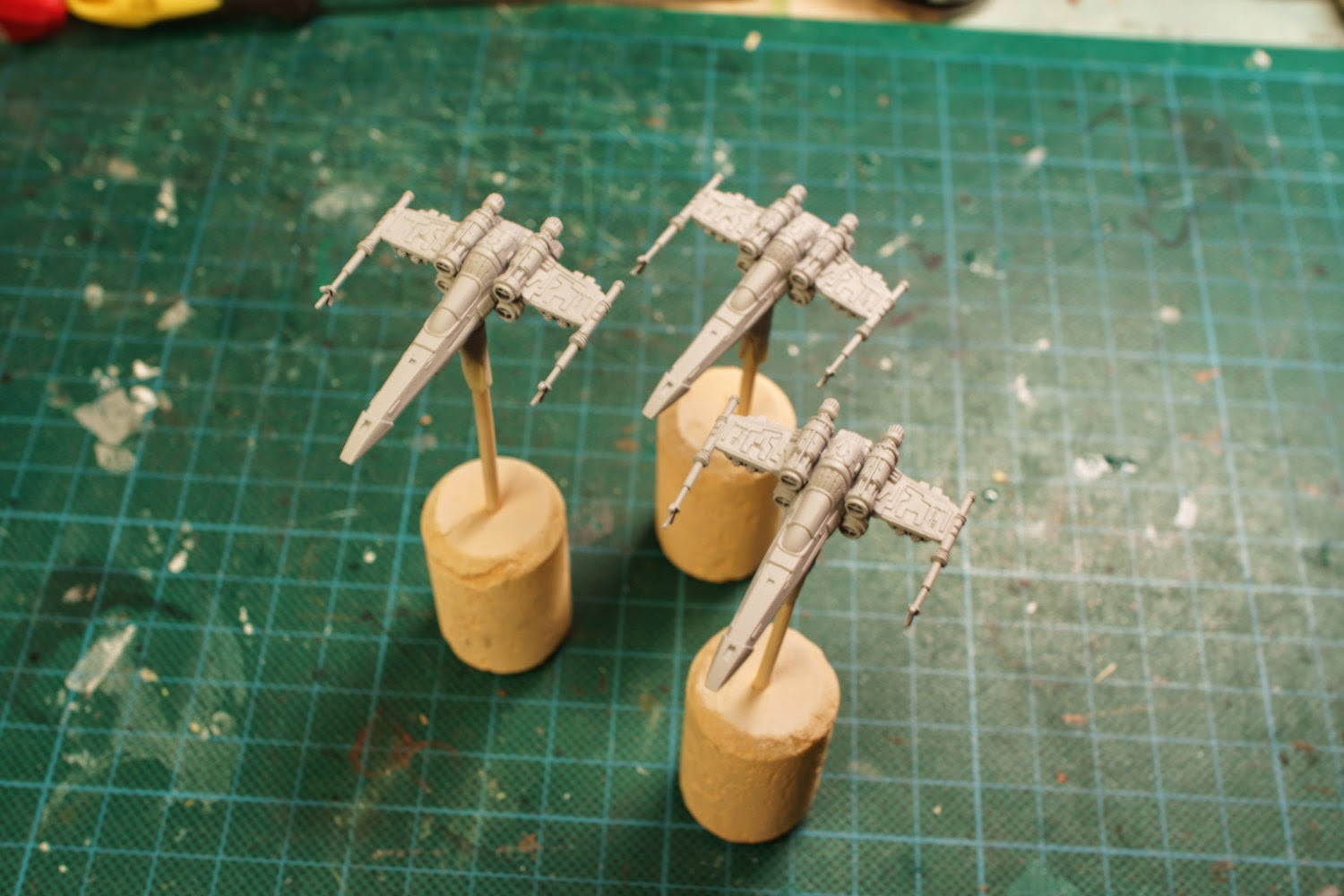 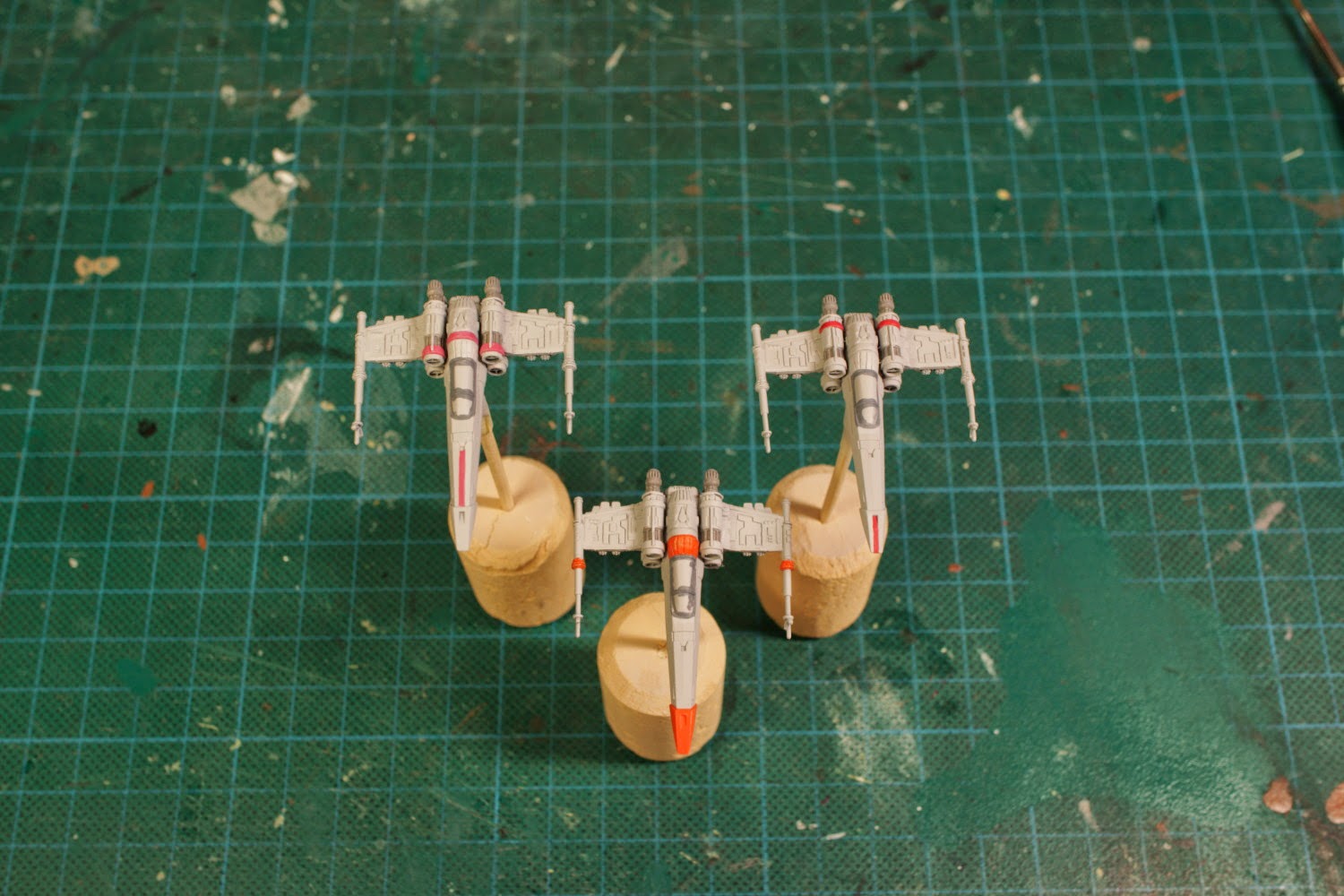 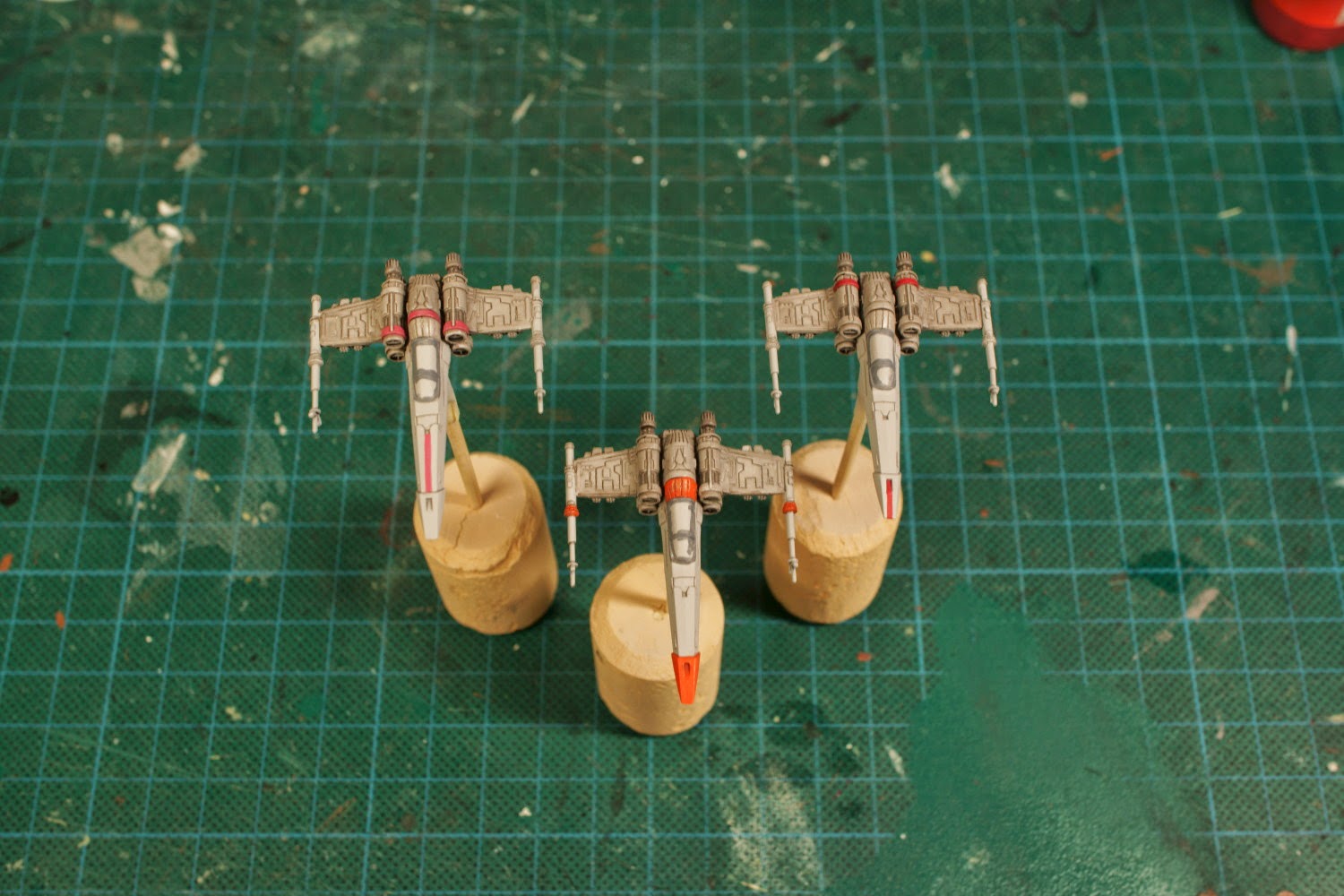 As always primer went on first, directly on top of the factory paintjob. This was followed by a basecoat which was a 1:3 mix of VGC Dead White and VGC Stonewall Grey. After that I picked out the engines and the vents behind the air intakes with plain VGC Cold Grey while the cockpit frame was painted with a 1:1 mix of Cold Grey and GW The Fang. I also painted some areas with the colour associated with the motif of each ship but more on that in a short while.

Shading was achieved by washing the models with a 1:1 mix of Army Painter Dark Tone and Strong Tone ink. While the wings, engines and middle hull were fairly heavily saturated with the wash, I took great care in not overusing the wash on the rest of each ship. This was in an effort to keep down clean up and save some time in the overall paint process. 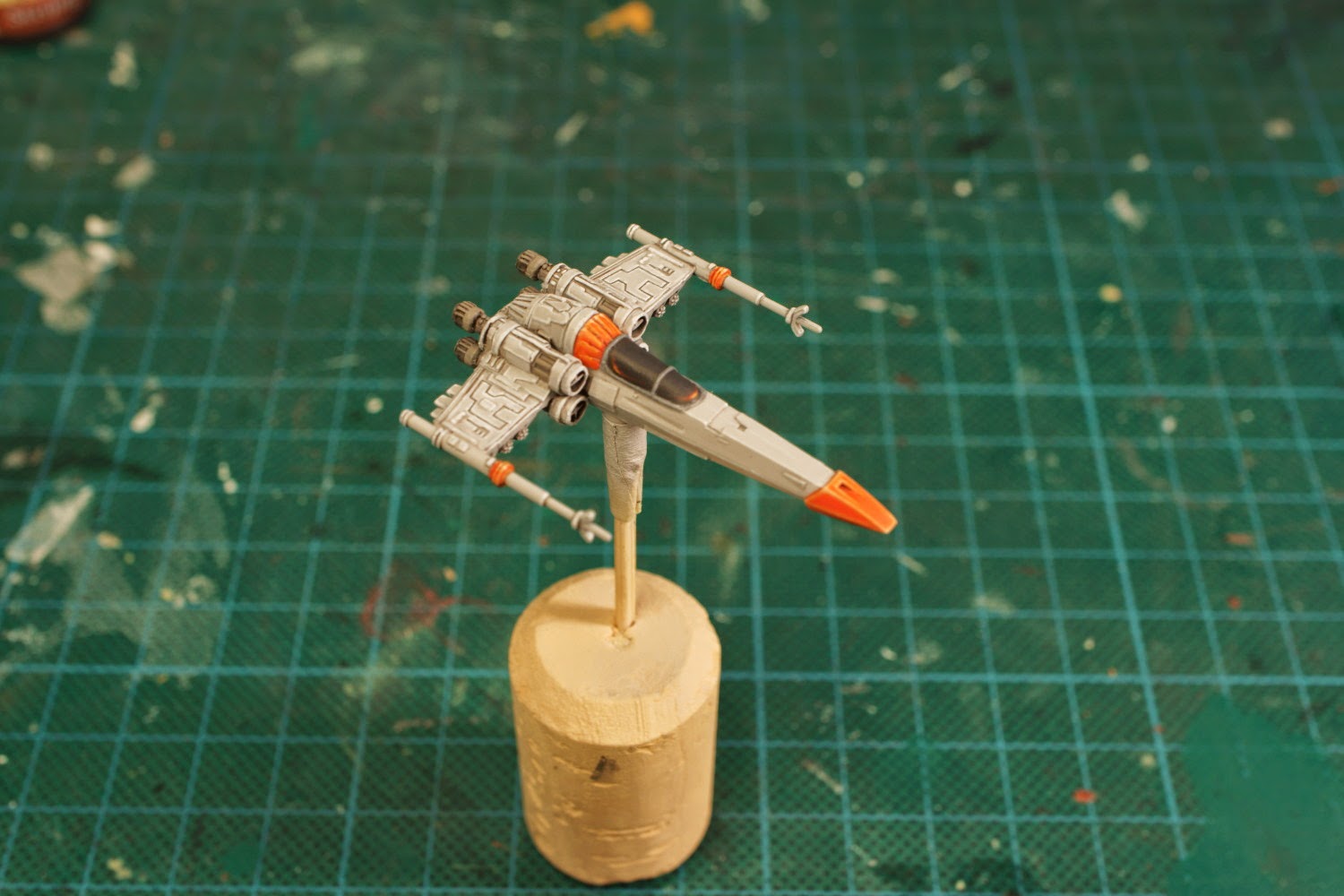 After cleaning up the model , I started highlighting every area painted with the basecoat using plain Dead White. The brightly coloured areas was painted more individually, in case of the model pictured above I used VGC Hot Orange as the base with P3 Cygnys Yellow gradually mixed in to form the highlights. The cockpit window was painted with VMC German Grey with a tiny amount of Hot Orange mixed in. To form the reflection I then gradually mixed increasing amounts of Hot Orange into the mix. 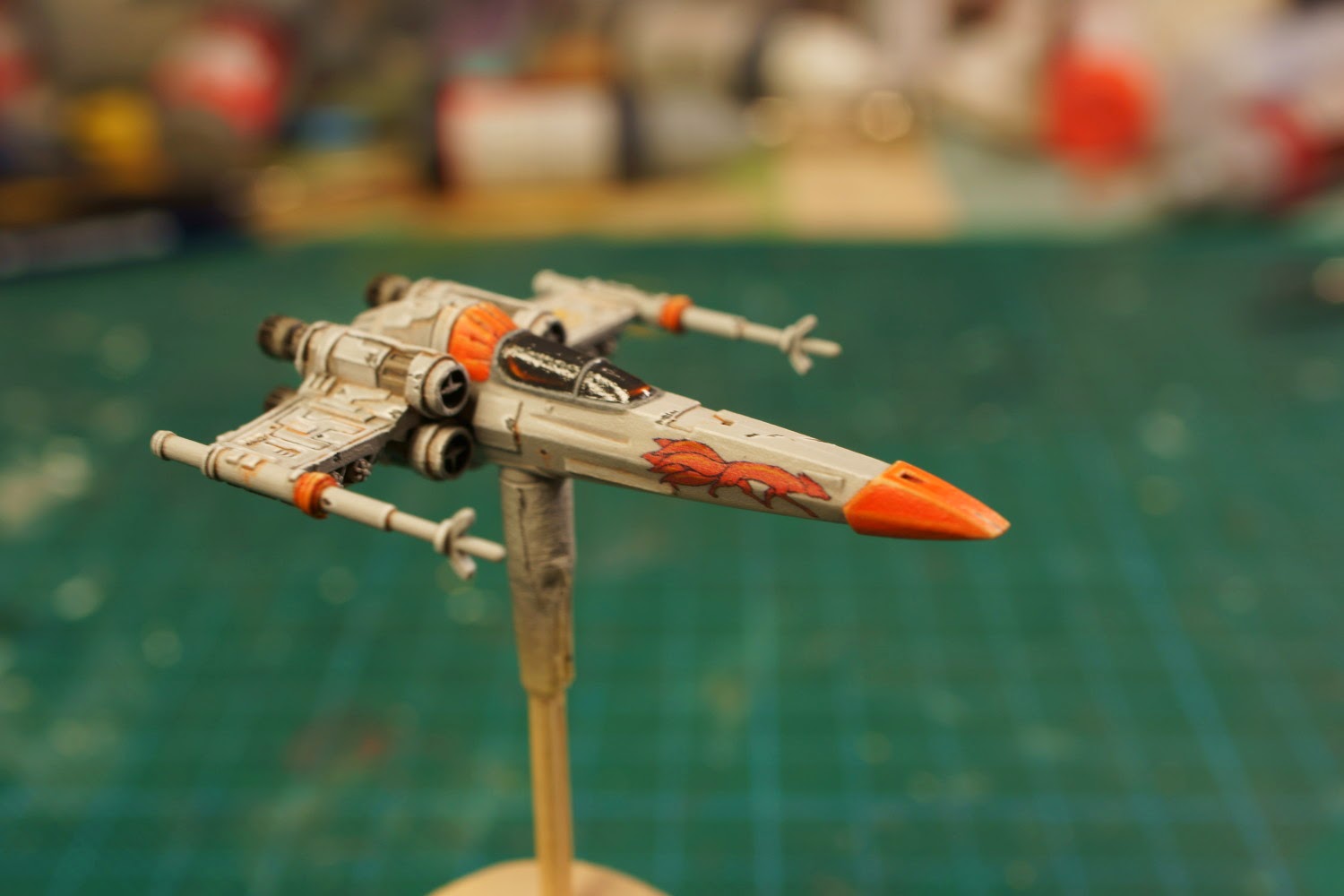 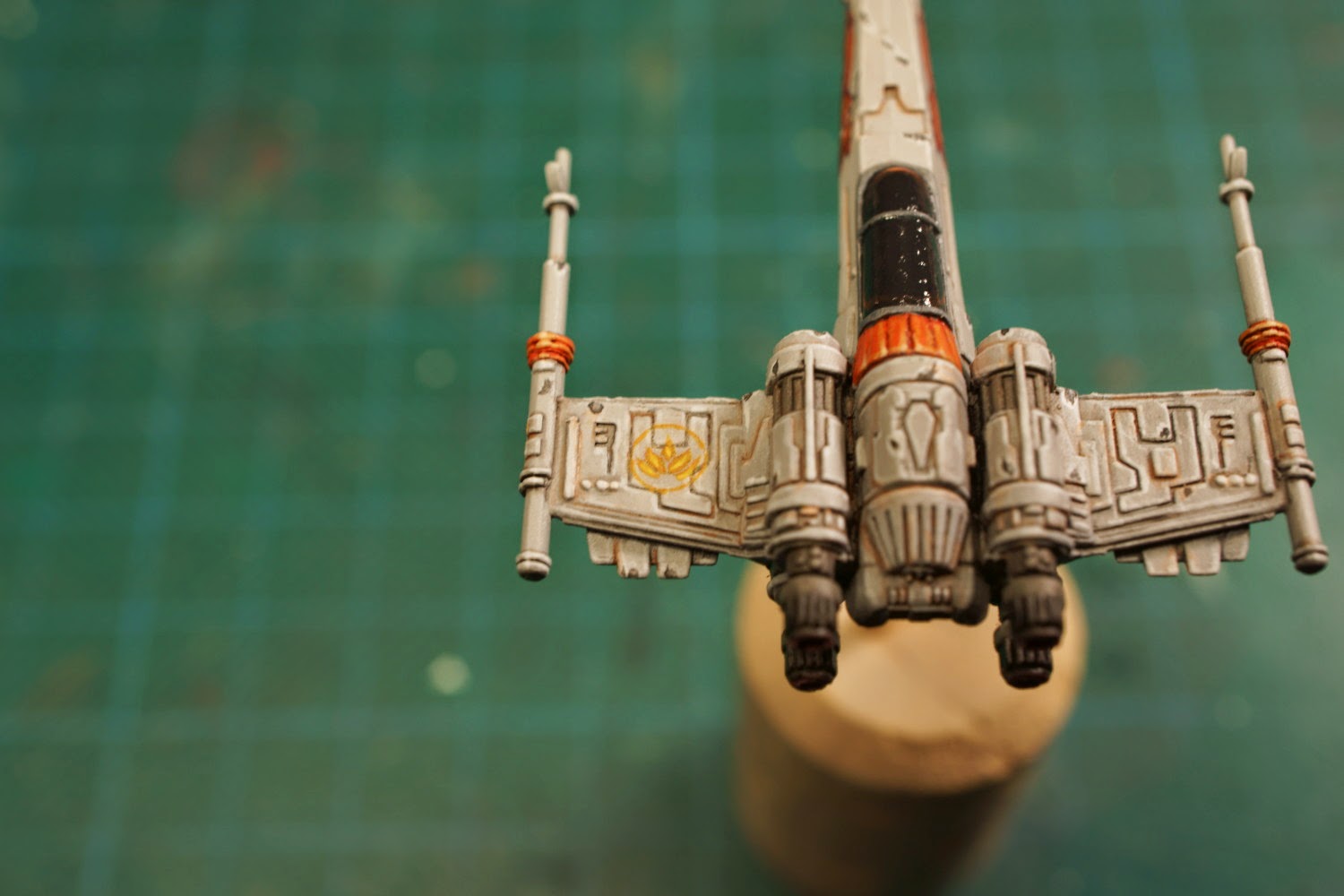 Each ship was chipped and rusted using my usual methods, i.e. first randomly painting some of the main highlight colour and then German Grey to represent chips and heavily thinned out VGC Parasite Brown for the rust.

And here comes the cheat code! While I probably could have painted each motif by hand I decided to preserve my sanity by utilising printable decal paper instead. This was something I've heard of but never tried before and this was the perfect project to test it out. Essentially it's exactly what it says on the tin, a special paper that can be used to print out just about any conceivable design you can come up with.

Of course, getting the decal paper was only half the effort. Quite a lot of calibration and testing was needed to figure out the best method to print the necessary designs. And that still didn't quite guarantee that the motifs came out exactly how I wanted them to. In the end I had to do some painting on top of the motifs to get the proper look. In fact the lotus design served as little more than a guide, the rest was painted using VGC Plague Brown with some Cygnus Yellow used as additional highlight. 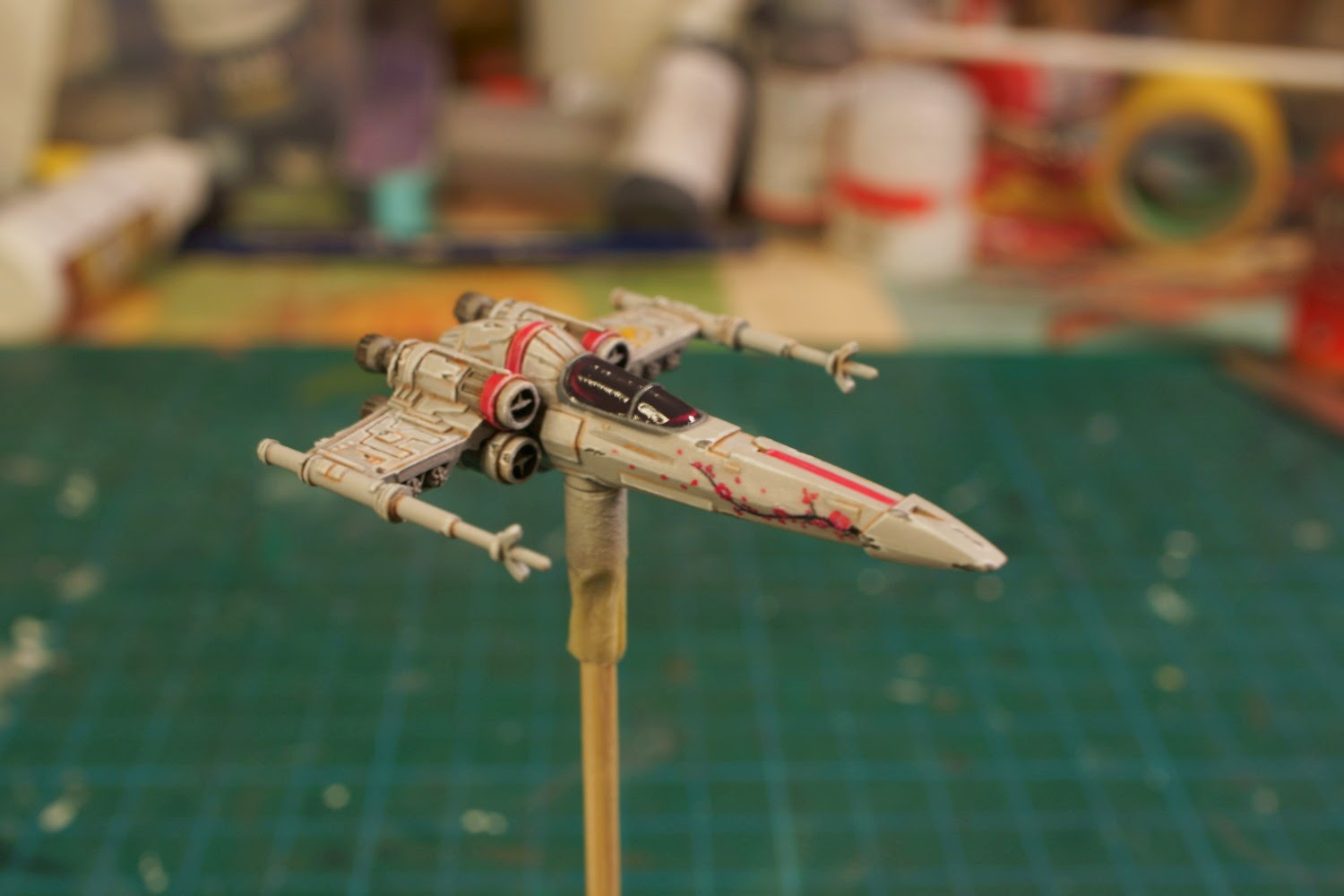 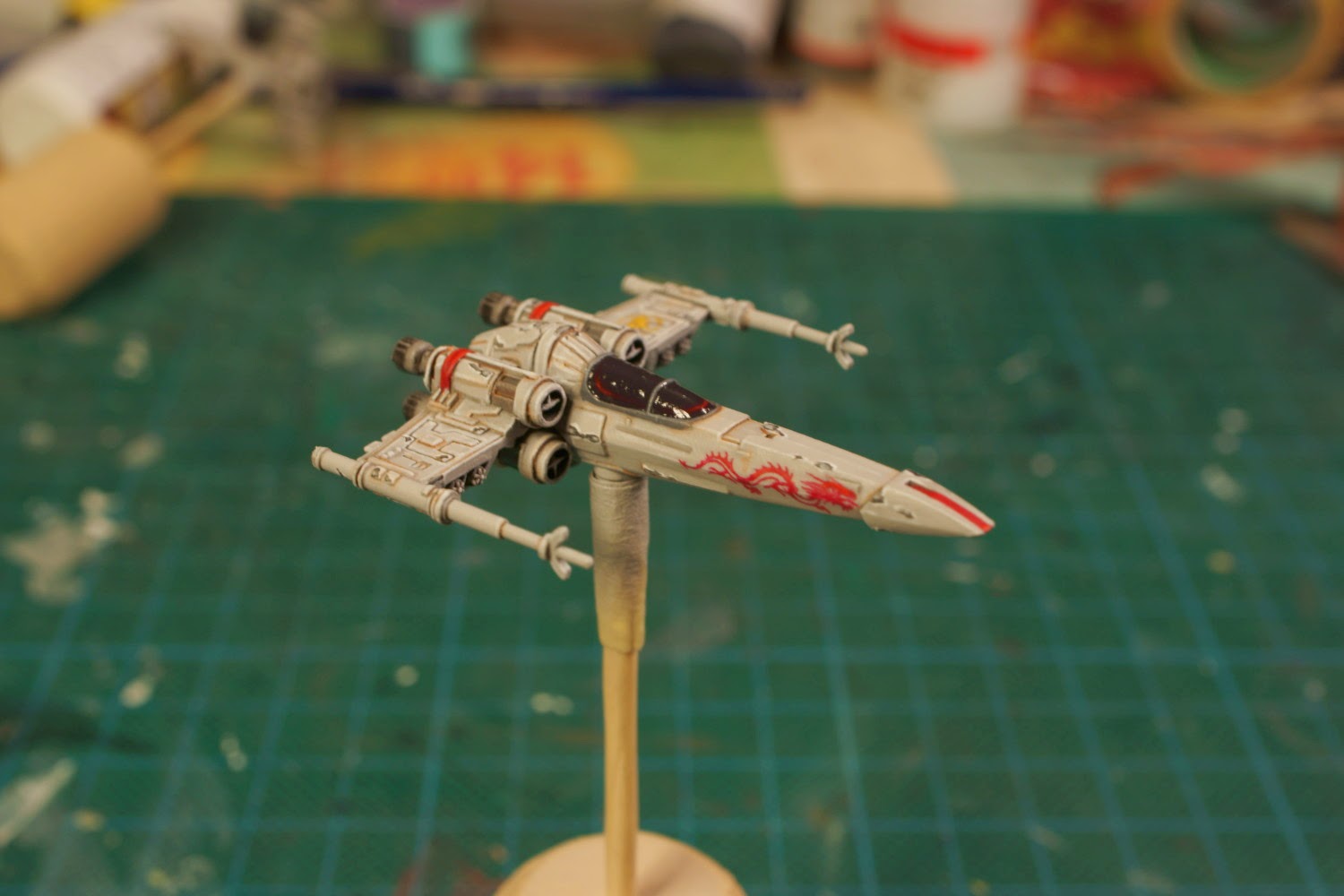 The Red on the Dragon Z-95 was plain Gory Red but instead of using white for the highlights I used some VGC Bloody Red and Hot Orange. I did this to differentiate the ship further from the Sakura Z-95, giving the ship a slightly warm tone compared to the fairly cold highlight on the Sakura ship.

On thing that unites all three ships is heavy use of varnish. The cockpit windows obviously got some coats of gloss varnish, but something that's not apparent is the varnish used around each decal. When the decals had settled properly on the models I painted several layers of varnish on the decals to hide the edges. Normally this wouldn't have been a huge problem, but on this scale even the edge of a decal paper looks out of place. All in all I think I managed fairly well with making the decals look like a natural part of the models. Until next time!