Steam sale! That's my excuse for not updating for a while. That and the wonderful game Darkest Dungeon I bought during the sale. Anyway, I'm going to have to post several things the coming days to catch up with everything I've done.

First on the chopping block is my latest scratchbuild, a Star Wars ship called the Wayfarer-class Medium Transport. Like all my previous Star Wars scratchbuilds this one is intended to be used in Fantasy Flight Games' X-wing game, though it could probably serve as a decent showpiece model as well.

Now the Wikia page claims the ship is 82 meters long which puts it in Epic territory, but the commissioner was adamant that that wasn't the case. He claimed that the length was based on an RPG deckplan and I can certainly see his point. Besides, it wouldn't be the first time the Star Wars Wikia has been wrong. If anyone still complains I will point them to the nearest space wizard, I mean Jedi. Anyway, it was instead estimated that the ship should be around 40 meters long which means almost 15cm in 1/270 scale. Still a rather big beast all things considered. 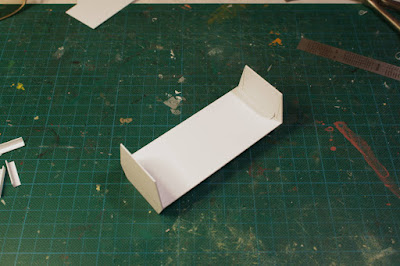 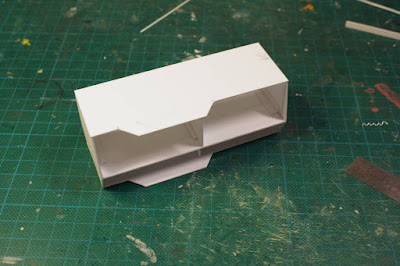 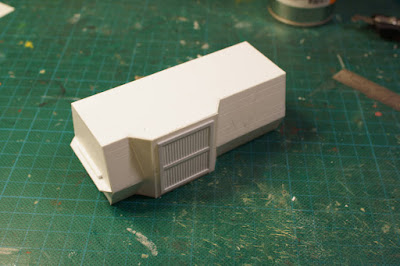 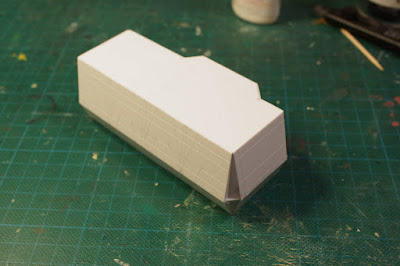 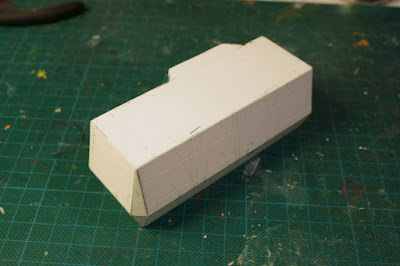 The Wayfarer has certainly been an interesting and challenging build. Not only is information and pictures of it really scarce (The picture at the start of this post is the only artist rendition I can find, the rest are deckplans) but it's also an asymmetrical ship. When I began the build I wasn't quite sure how to tackle this problem but in the end I decided to start on the container/hangar seeing as it would be the easiest part. 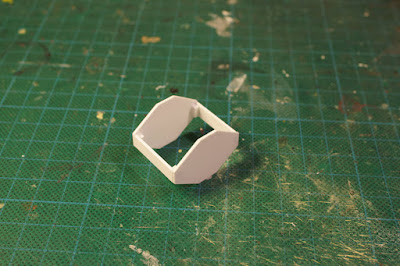 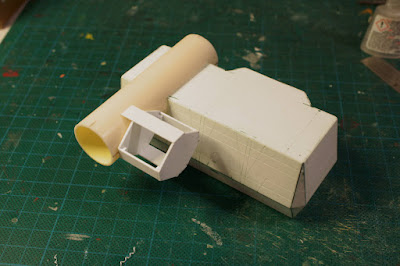 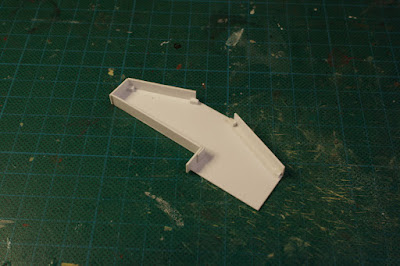 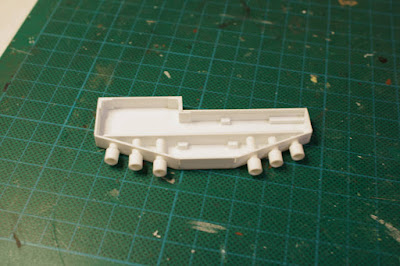 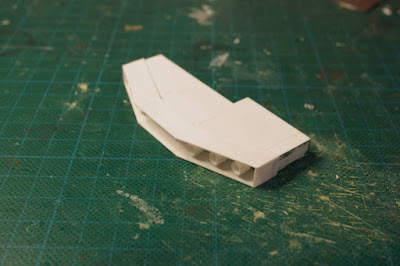 With the container built, I had to start consider the actual spaceship. The main hull would consist of the living quarters and bridge, an engine assembly and a big honking tube connecting everything. The tube was perhaps the most critical part of the entire build and I spent considerable time measuring and pondering before I dared make any cuts. It's actually a PVC tube normally used to electrical installations and it measures 25mm in diameter. It's probably a bit too large but the only other diameter available to me would have been too small instead. Gotta use what I can find. 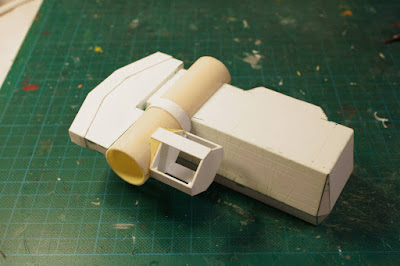 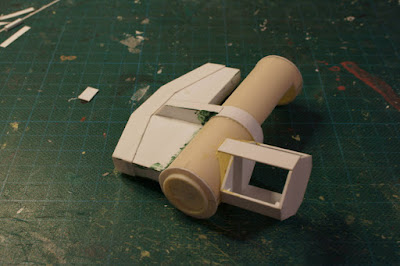 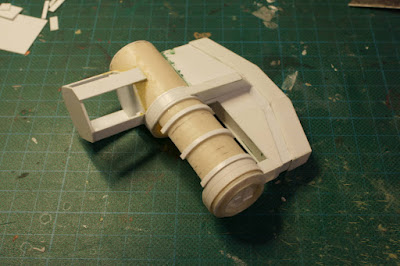 With the main structural elements built and connected to each other I could finally start adding some less important bits and add some much needed strength to the pieces already glued to the tube. Round shapes are always difficult to work with and making a tube the spine of a ship certainly didn't make it any easier. 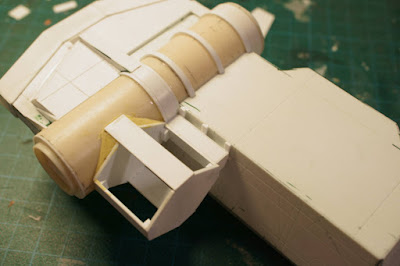 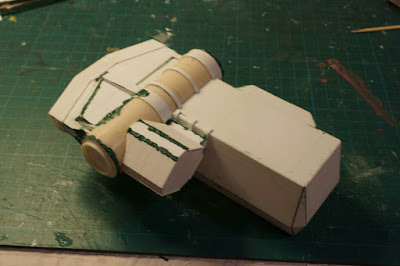 Up until this stage I wasn't sure if I should make the container detachable or not. In the end I decided that, while possible to magnetise the model, it just wouldn't look terribly good so I glued the ship to the container permanently. I wasn't quite sure at first how to build the 'claws' that can be seen holding the container close to the ship in the source picture, but in the end I think I managed a decent solution. 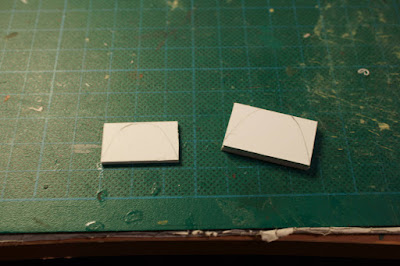 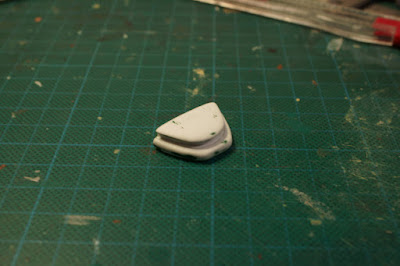 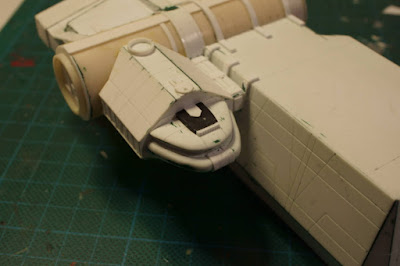 The final major part to be added was the bridge. As I said earlier, round shapes are difficult to work with at the best of times and the bridge doesn't have much in the form of straight edges so I had been dreading this part.

The main pieces are two pieces of solid plasticard, the smaller one being 2mm thick while the other one is two 2mm pieces glued together. I drew rough shapes and started cutting, sanding and grinding down the pieces until I was satisfied. Dremel type rotary tools are invaluable for this kind of work. While the two pieces aren't quite as symmetrical as I would have liked, it's unlikely that I will be able make them much better than this. 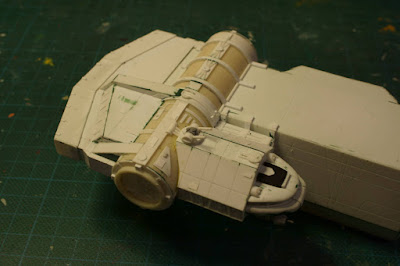 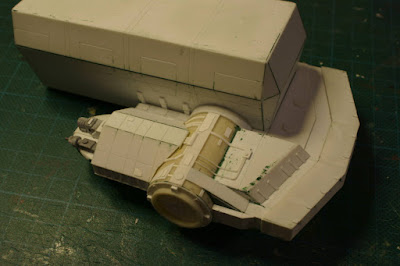 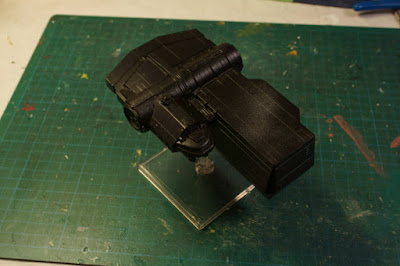 Now I could finally start adding details. Since I have no clue how the ship looks from underneath, my model doesn't really add much compared to the top. I tried to give the model the appearance of a ship that has been a bit modifed, but not too heavily. That type of look I leave to the Millenium Falcon.
Upplagd av Macross_VF1 kl. 22:50:00