Building the mark two version of the E-wing was simple and yet quite complex at the same time. I knew from the start that I couldn't mess around too much, because let's face it, there's not much model to go around. Any mistake would likely be very costly.

To minimise the amount of conversion work needed, I decided to keep as much of the original model as possible. This meant that most of the model's details would be preserved and make it look more authentic. In fact this was one of few complaints I had about MajorTom11's conversion. While he did a great job on his E-wing, I could never quite get over how some of the cuts he made ruined some of the details. 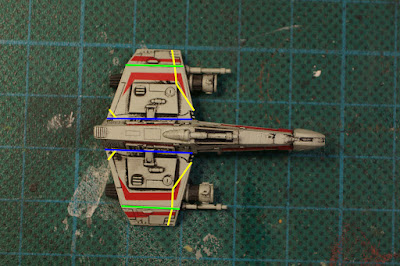 I carefully planned a series of cuts that would remove the wings as close to the fuselage as possible(blue lines). When that had been achieved I planned to remove the angled wingtips (green lines). Finally I wanted to chop off some unnecessary dead weight from the wings in order to make them look sleeker and more fitting of a high-tech space fighter (yellow lines). 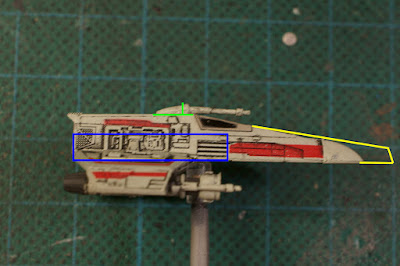 The top gun would also have to be removed (green lines) and the mounting point in particular would be ditched. The blue rectangle represent an area where I wanted to add an additional engine/ram scoop to each side of the fuselage and the yellow lines show how I planned to lengthen the nose quite considerably. In fact, the nose job was perhaps the most important part of this build as I've never quite like the model's somewhat phallic looking nosecone. 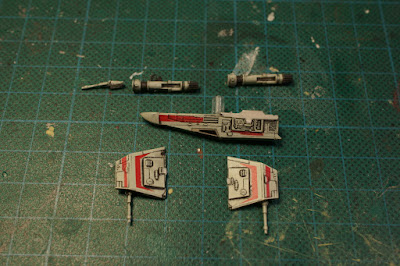 With the planning done, first on the agenda was removing the glued on pieces and the wings. Just about every cut on this model was made using a razor saw. Whatever you do, don't use a knife. A knife will damage the model more and will not cut as straight. 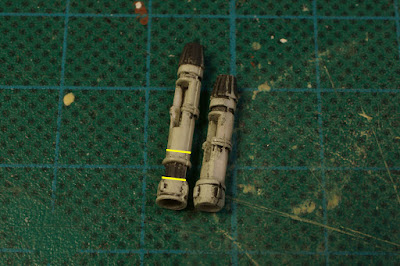 With the engines loose, I could now easily do further conversions on them. I sawed off the engine intake and made the rest of the engine about 2mm shorter (the area between the yellow lines). I then flipped around the intake, drilled a new hole in it and glued it back in place. To finish the conversion I added a short piece of 1mm piano wire in the middle of the intake though that is unfortunately not visible on the photo. 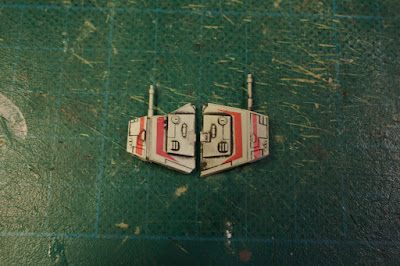 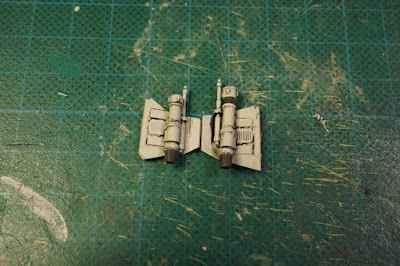 The removal of the 'dead weight' on the wings went as planned and didn't really prove terribly difficult. I did however discover that the laser cannons had to be moved closer to engines and also a bit further back. Not a huge problem however, seeing as the wingtips would also be removed and therefore make it much easier to reach the cannons.

When all the cuts had been made and I was satisfied with the modifications I simply glued all the pieces back where I wanted them. To remount the wingtips I first glued a small piece of 0.5mm plasticard rod in between the wing and the tip. 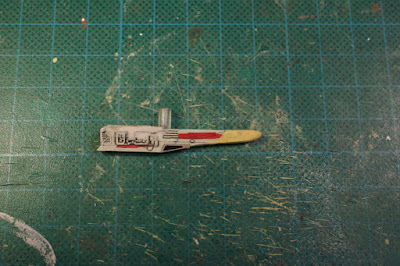 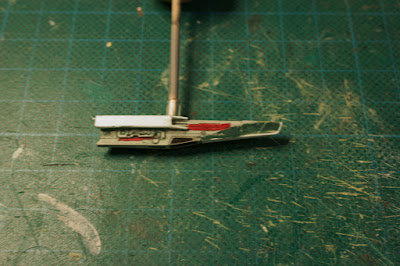 The nosejob began by trimming down nose quite considerably. To provide extra stability I drilled a hole in the tip and glued a short piece of 1mm piano wire in place. Around this I wrapped a blob of milliput which I poked and prodded lightly until I had achieved the aproximate shape I was looking for.

When the milliput had cured I could do some fine tuning. Excess milliput was removed and the shape was finalized. I also added a thin strip of plasticard on top of the nose to give further stability and give a smoother appearance. Some liquid green stuff to fill in the flaws and I was ready to do some panel lining.

At this stage I also added the extra engines/ramscoops. I had to remove quite a bit of detail on the sides of the fuselage in order to make the scoops fit well, but it was well worth the effort. Oh and for anyone wondering why the ship is upside down in some pictures, well it was easier to get a good photo from that angle. 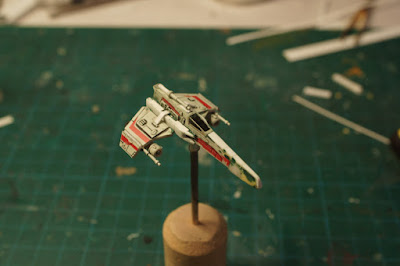 With most of the ship finished, it was mostly just a matter of gluing the parts together. The final additions were some connections going from the fuselage to the wings and adding a new mount to the top gun while moving it to the back of the hull.

I have to say that I'm still not sold on the top gun. It's just a damnably stupid place to put a cannon. If I ever build another Mark 2 E-wing I will probably leave it off entirely. All in all though, I'm quite pleased with this one as it makes the E-wing a much sexier ship.