As I wrote previously the main inspiration for the K-diver was US dive bombers, more specifically, aircraft like the Douglas SBD Dauntless, Curtiss SB2C Helldiver and Grumman TBF Avenger. Also, as I was researching these aircraft, I noticed that many pre-war US aircraft often incorporated yellow in their livery/paint scheme so I had to include that as well. 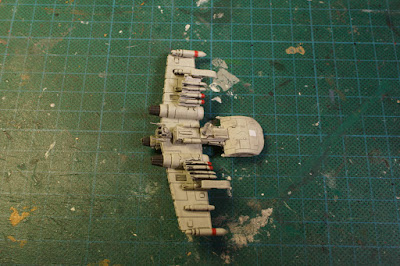 Before painting I had to do a few conversions. The ball turret underneath the nose was moved to the rear while it's previous mounting point was covered with a small piece of plasticard. This was something I saw someone suggest on a forum when the ship was originally previewed and it really improves the look of the ship. I also replaced the barrels of the turret with short pieces of 0.5mm pianowire, as one of the plastic barrels broke during the move to the rear. 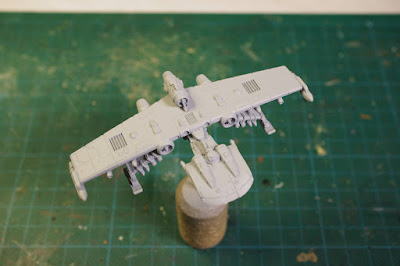 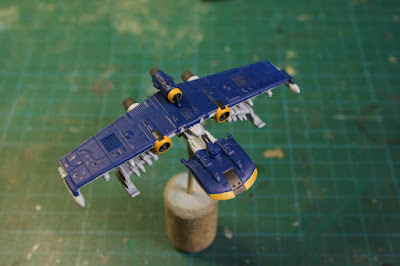 I primed the ship using a 2:1 mix of Vallejo's USN Light Ghost Grey Primer and Air VGC Wolf Grey. The primer also served as the basecoat for the underside while the top instead was painted with VGC Imperial blue.

The yellow parts were painted with VGC Plague Brown, the gun barrels, engine intakes and exhausts with VMC German Grey and the divider on the nose and the top of the two wing engines with a 1:1 mix of German Grey and Black. 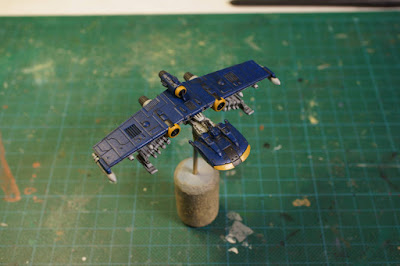 The ship was sprayed with gloss varnish in preparation for a black oil wash. When the oil wash had dried I cleaned it up and sealed it by spraying the model with matte varnish. I had been a bit liberal with the wash so to reduce it a bit I drybrushed the basecoat lightly on the underside. 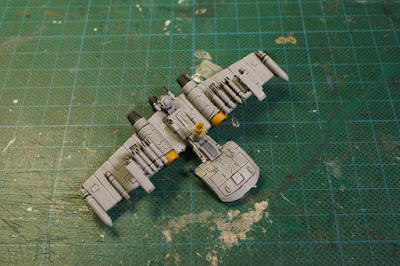 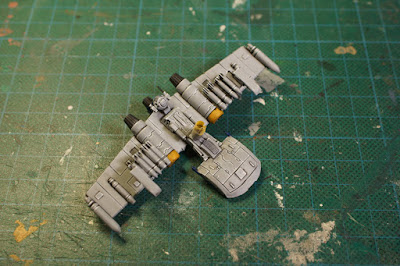 The first highlight of the ship's underside was a 2:1:1 mix of USN Light Ghost Grey, VGC Wolf Grey and White. The second one was a 1:1 mix using the previous mixture and additional White. For the final highlight I used pure white on the most prominent edges. 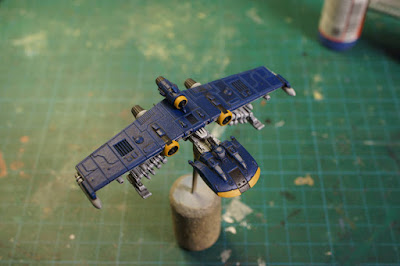 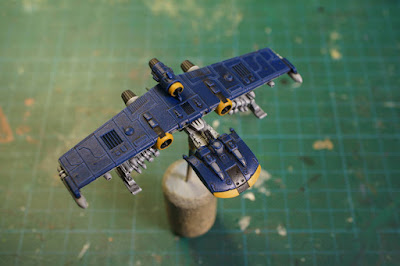 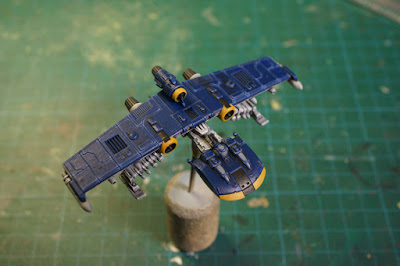 I also took the time to paint the windows using a 1:1 mix of VGC Cold Grey and VGC Sombre Grey. This was then shaded using AP Dark Tone ink and when that had dried I reapplied the main colour, taking care to not cover the entire window, instead leaving some of the wash still visible close to the window frames. 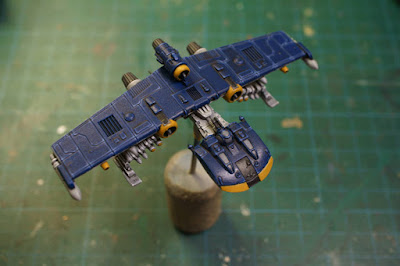 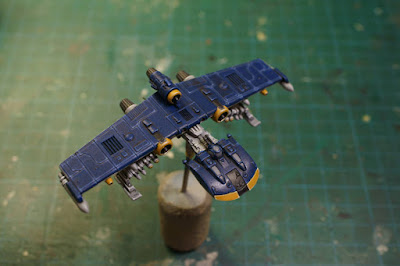 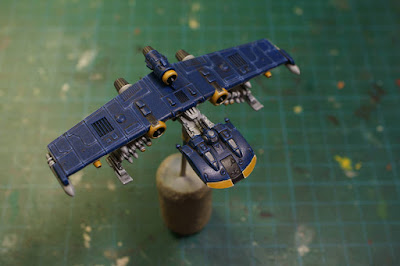 The yellow was highlighted in three steps, first using a 2:1 mix of Plague Brown and White, second a 1:2 mix of the previous colours and finally White with just a dash of Plague Brown added.

The cockpit windows was given a reflection using the base mix of Cold Grey and Sombre Grey with VGC Stonewall Grey added to the mix. For the final parts of the window reflection I used pure White. 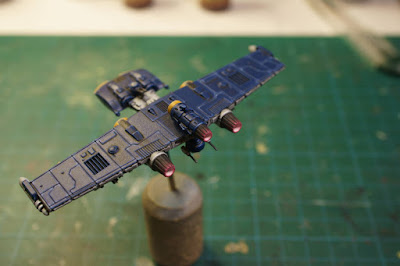 The engine glow was slowly built up using successive glazes of Army Painter Red Tone ink as a start. When I had a good start I switched to VGC Red Gore that I added small amounts of white to. For the middle of the engines I used White with only a dash of Red Gore added. 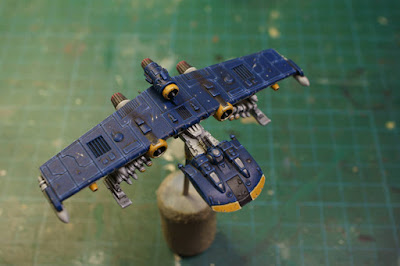 Finally I could add some scratches, dents and laser scoring. I used my usual method mentioned in my tutorial on the subject. I also added some grime and dirt streaks, particularly on the underside, as they aren't very visible against the dark blue top.
Upplagd av Macross_VF1 kl. 21:52:00