It took some time, but I've finally managed to block out the intro song from Robotech! However, as I write this paint guide I'm in serious danger of a relapse. 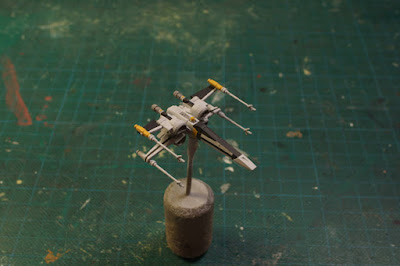 The ship was first primed with Vallejo's Grey Primer followed by a base coat using a 1:1 mix of VMC Air White and VGC Air Stonewall Grey. After that I picked out the details. The black areas used a 1:1 mix of AP Matte Black and VMC German Grey, the yellow was a 3:1 mix of AP Daemonic Yellow and VGC Plague Brown and the grey details were painted with pure VGC Cold Grey. 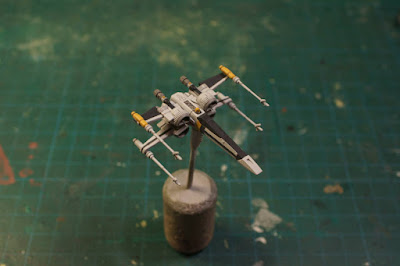 With all the basic colours in place I sealed the model with a coat of Gloss Varnish. For shade I carefully painted AP Dark Tone ink into every recess, except for the yellow areas which were instead shaded using AP Soft Tone ink. I airbrushed another layer of varnish, matte this time, and set about correcting any mistakes from the shading stage. 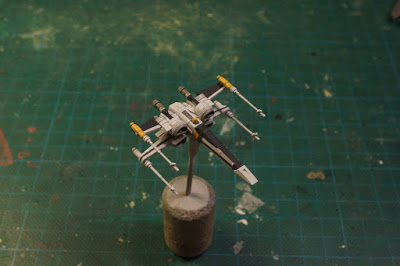 As any good painter will tell you, never paint pure white as it's impossible to highlight white. I had certainly not made that mistake but the base coat was bright enough that highlighting was still a fairly difficult prospect.

For the first layer I used a 3:1 mix of AP Matte White and VGC Stonewall Grey. This was painted on every edge I could find. For the second layer I painted heavily diluted Matte White on any prominent edges and panels. For the third and final layer I again used Matte White, though barely diluted, and only applied to the most raised details. 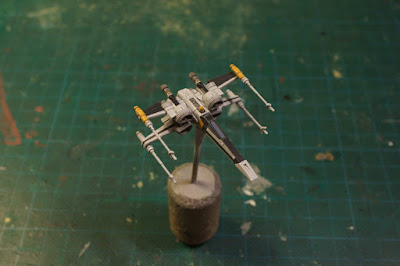 Black is similar to white in that you should never paint pure black. However in this case, the problem is not highlighting, but rather shading as you can't make black darker than black. This meant that the Dark Tone ink from the shading stage was not really enough. To remedy this I painted diluted Matte Black directly into the recesses of any area painted black.

For highlight I began by painting all black edges with German Grey. The second highlight, a 1:1 mix of Cold Grey and German Grey, was applied to the same edges as the first layer, though in thinner lines, taking care to leave the first layer visible. The third layer was pure Cold Grey, mostly applied around the prominent edges around the cockpit. The fourth and final layer was pure Stonewall Grey, painted as little more than tiny dots on the cockpit frame. 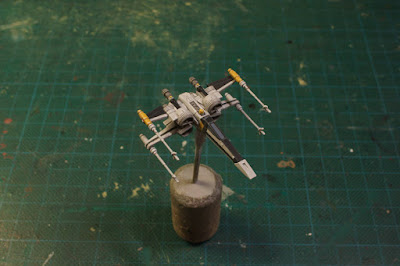 The yellow areas were highlighted by first painting all edges with Daemonic Yellow. The second and third layers added small amounts of white to the mix.

All areas painted with Cold Grey received a light drybrush using a 1:1 mix of Cold Grey and Stonewall Grey.

The cockpit windows were painted with VGC Sombre Grey, shaded with Cold Tone ink and when dry, I reapplied the base colour, taking great care to leave the shade visible in the recesses. 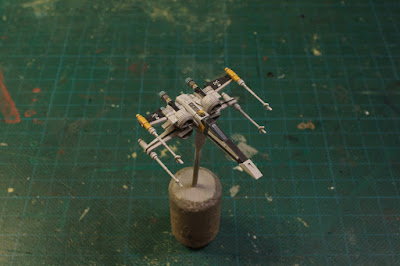 To really emphasise the 'Skull One' paintjob I scoured the Internet for a suitable skull and crossbones marking. This I made into a decal which I printed out and applied to the model.

The reflections on the windows were achieved by taking Sombre Grey and slowly mixing in increasing amounts of Stonewall Grey for each successive layer. For the very final layer I used pure Matte White.

The engine glow is not my standard fair as I realised while researching the paintjob that Veritechs usually feature a blue/white, almost green, glow. So instead of the usual red/pink I go for when painting X-wings and Zed-95s, I tried using VGC Falcon Turquoise with some white mixed in.

Of note is that I did not weather this ship at all. No scratches, burns, streaks or dirt. This because the TV-series seldom (if ever) showed such things on the fighters and I wanted my model to stay true to the source material.
Upplagd av Macross_VF1 kl. 12:23:00