As mentioned in the previous post, part of the reason for this blog was to show the good people at Pig Iron Production how I heavily modified one of their ubiquitous Ironside vehicles. If you wish to know more about this vehicle, head over to Graven Games for a proper review. 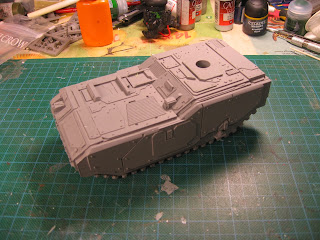 As of right now I own five of these great vehicles and I use them mostly as Rhino equivalents in my homebrew Space Marine army. Yes, every Space Marine vehicle using the Rhino chassis are represented using this as a base. However I wanted a Land Raider for my army and this was just not big enough. It is almost the same length as a Land Raider but not high nor wide enough. Recent experiments with plastikard however convinced me that I should be able to build my own Land Raider.

After some brainstorming and sketches I realized that while I could most likely build a Land Raider from scratch, I would be half insane before I had finished it. So to speed up the process I decided to use the Ironside again but widen it, make it higher and give it the proper weapons. After some consultation with Pig Iron I got myself a razor saw and started cutting. 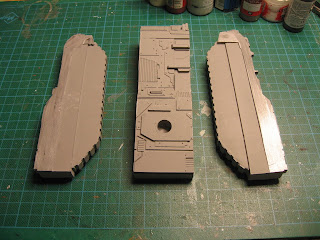 As you can see I cut away the middle and left the sides. While brainstorming I knew that the tracks would be the most tedious part to build on my own so this was a huge time saver in the long run. 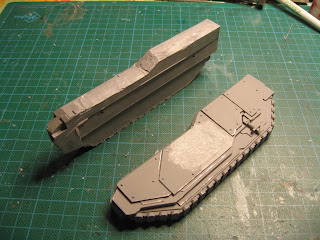 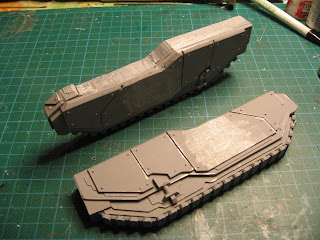 Next I remove a good deal of detail on the top of each piece and the hatches on the sides. This was in preparation for the plastikard superstructure that I was going to add. 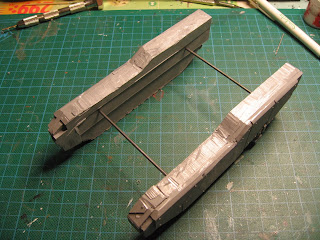 Finally I added two rods made out of 2mm pianowire in between the pieces to give the tank stability and finalize its basic size. I glued these in place with epoxy glue. Ironically I intended to make the model 11cm wide but apparently I miscalculated somewhere, because the final width on the finished hull was 10,5cm. Oh well, still half a centimeter wider than an actual Land Raider.
Upplagd av Macross_VF1 kl. 20:34:00