And so the detailing began. Everything I did from this point forward was made in an effort to mimic an original, unmodified Ironside. Not strange considering I already had three others fully painted and I wanted this one to fit in without being bullied by its brothers and sisters. 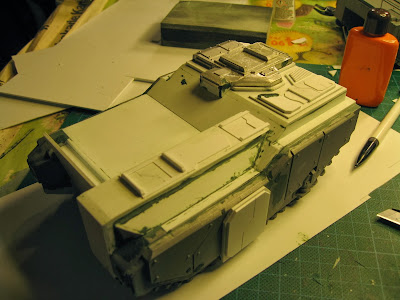 First I fitted a leftover part from a previous Ironside on the rear superstructure. It is the only metal part on this tank and the reason I hadn't used it was because it was crooked from casting and I didn't quite like the way it looked. However, on this build it worked fine, especially after I fixed most of it's crookedness with Violence (tm)! Also called bending while grunting really loudly since the damned piece is quite thick. After some filing to make it flat on the underside, I glued it on place on top of another piece of plastikard for final placement. After that I filled the rest of the rear superstructure with assorted plastikard bits and started fleshing out the top of the crew compartment as well. 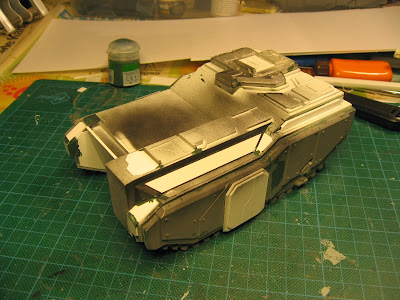 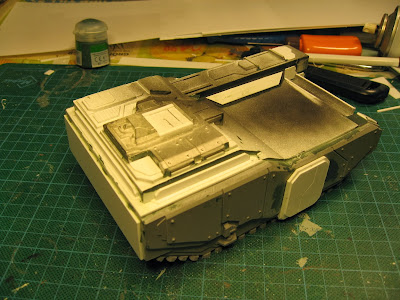 Sometimes when I build bigger things I spray some black paint on it while building. This gives the model better shadows and makes it a bit easier to see any imperfections, places that need more sanding and holes that needs filling. Another benefit is that it makes later additions easier to identify in a build guide like this. As you can see I added some more details on the crew compartment, made another, better hatch on the metal part and added some support pieces to the box around the rear superstructure. 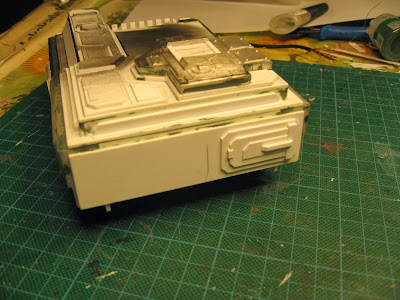 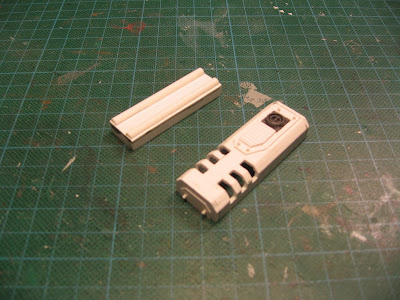 I finished most of the rear next. First I constructed a simple hatch and then turned my attention to the power plant. At first I was tempted to use some parts from Blood & Skull Industry, but decided that that I was going to make the engine myself. I did however draw inspiration from Blood & Skulls tank engine so I will give them credit for it. The power plant is made up of two parts. The first is basically just a rectangular box with two tubes cut in half on top. The next is the engine cover and as you can see it has six openings in it to show the inside a bit. In a later picture you can see the final assembly. Oh, and the dark grey fan/vent on the right of the cover? That is a leftover piece from the underside of a foot of a Gundam robot. Never, ever throw away your bits, kids! 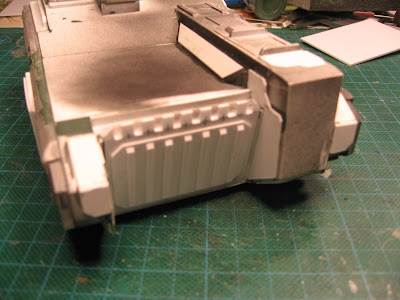 The front hatch was a bit of a conundrum. I knew earlier that I had made it too long but that was not a bad thing as I had not really decided on its design just yet. I spent some time looking at various sci-fi vehicles and real landing craft but in the end I decided to make it quite simple and yet fairly similar to an actual Land Raider. Looks chunky and rugged enough to take the running feet of a dozen half-ton super soldiers, doesn't it? 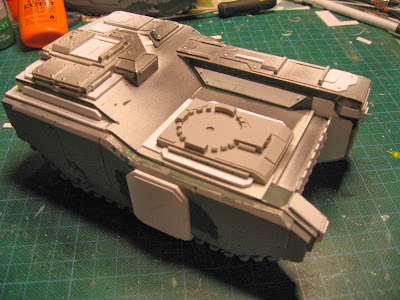 At this stage, the weapons had started to arrive. Even at the planning stage, I saw no real need to build the weapons myself as there are several companies that make good alternatives. For this build, I choose a pair of Laser Turrets and a Machine Gun Turret from Puppets War. One of the mounting plates (Which fits perfectly on a razorback BTW) I immediately cleaned up, put some plastikard around it and glued it in place. It is always fun when new toys arrive.
Upplagd av Macross_VF1 kl. 16:16:00