Sorry for the delay but real life has a tendency to get in the way of the fun stuff. Anyway, here is the paint guide I promised in my last post. 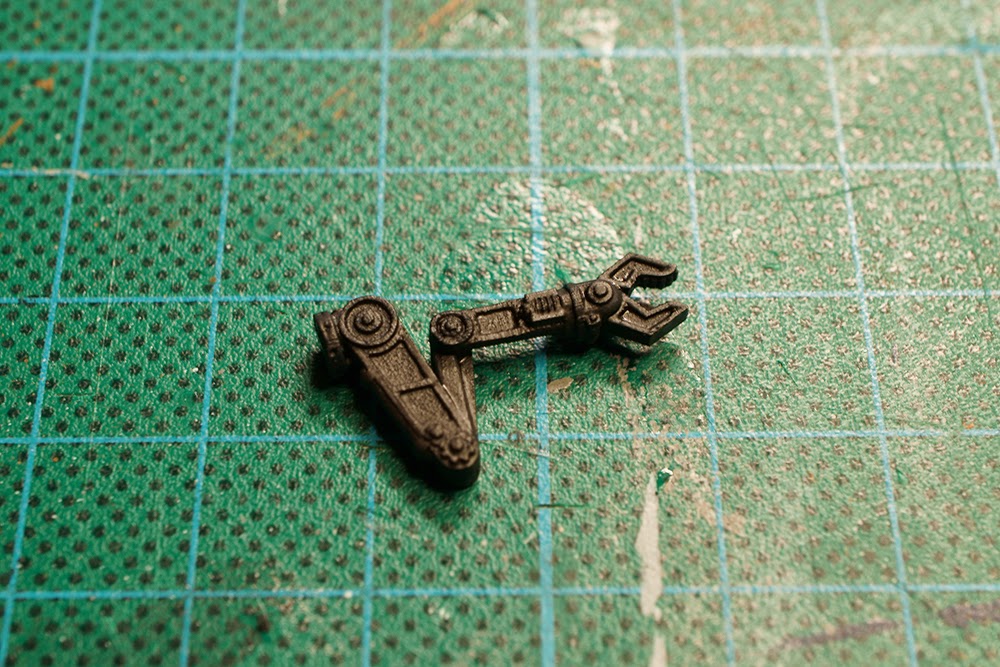 After painting the arm with Vallejo's black primer, I painted the claw, the claw adaptor, the anchor point and the rings and cogs at the ends of each arm with Vallejo Model Color German grey. The arms themselves got a coat of a 1:1 mix of Vallejo German grey and Vallejo Model Color Chocolate brown. Next I washed everything with Army Painter's Warpaint Dark tone ink . Funny thing about the ink though is that it is NOT an ink. Instead it is extremely similar to Games Workshop's old Badab Black wash. 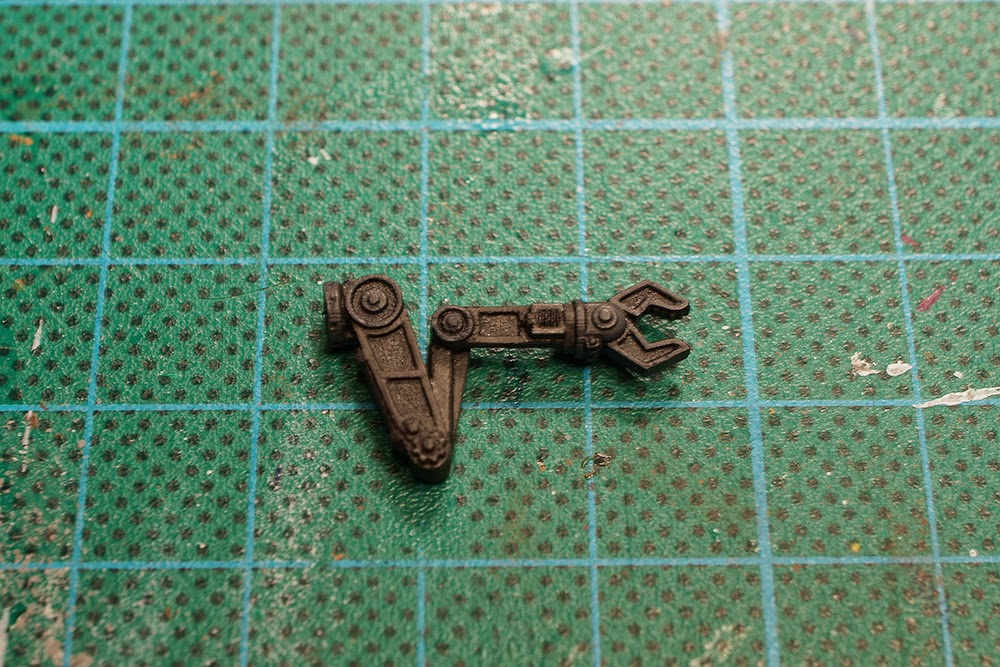 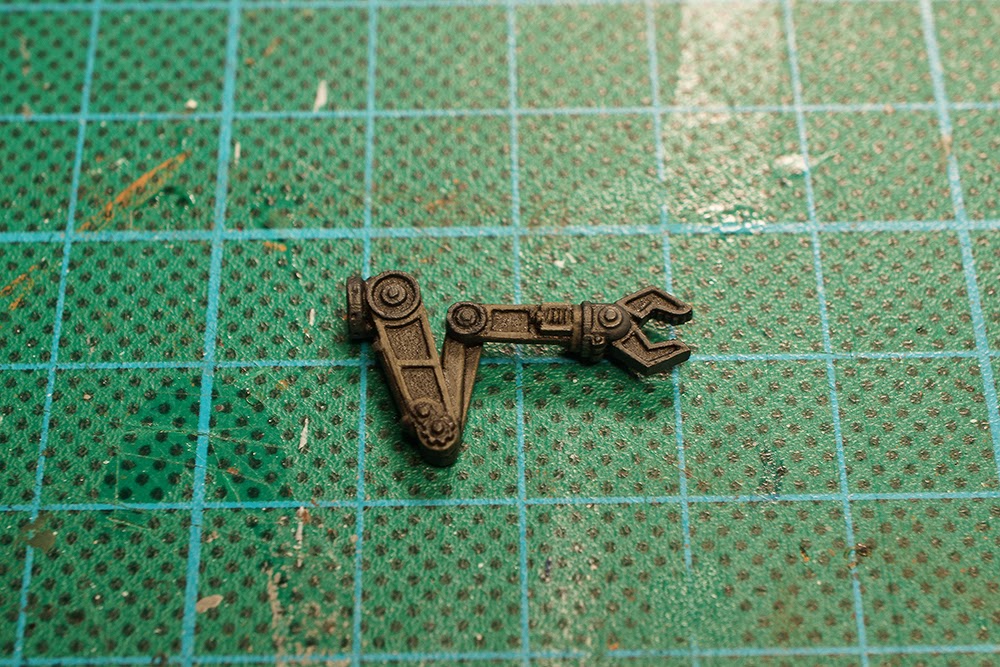 After the wash I repainted most of the model with the original colours, leaving only the deepest recesses. After that I applied the first of the highlights on the arms, leaving the areas painted only with german grey for later. The first highlight consisted of a 1:1:1:1 mix of German grey, Chocolate brown, Vallejo Game Color Earth and Vallejo Game Color Cold grey. 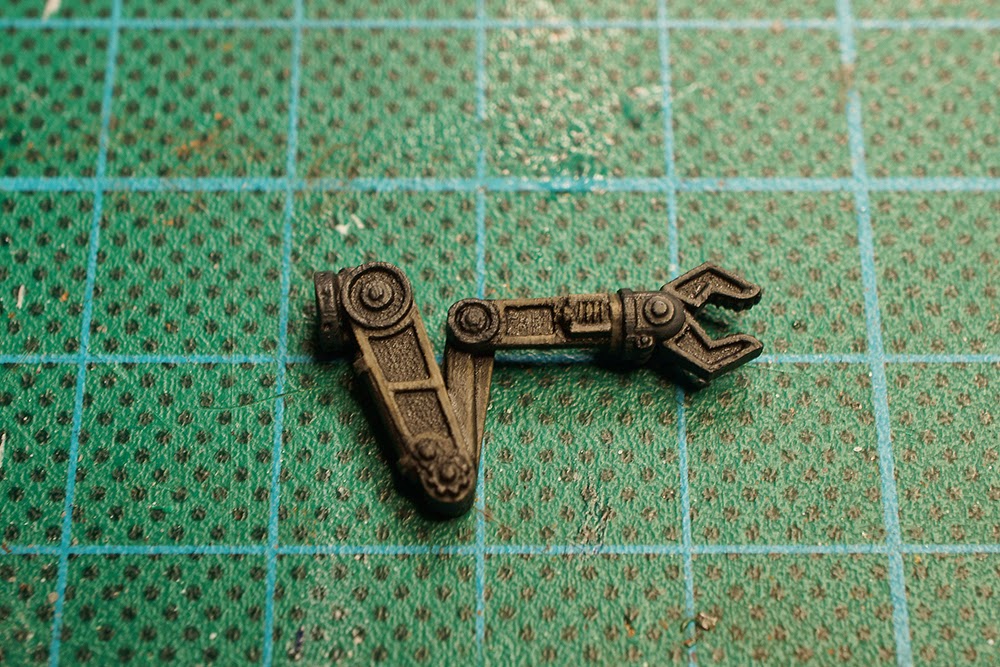 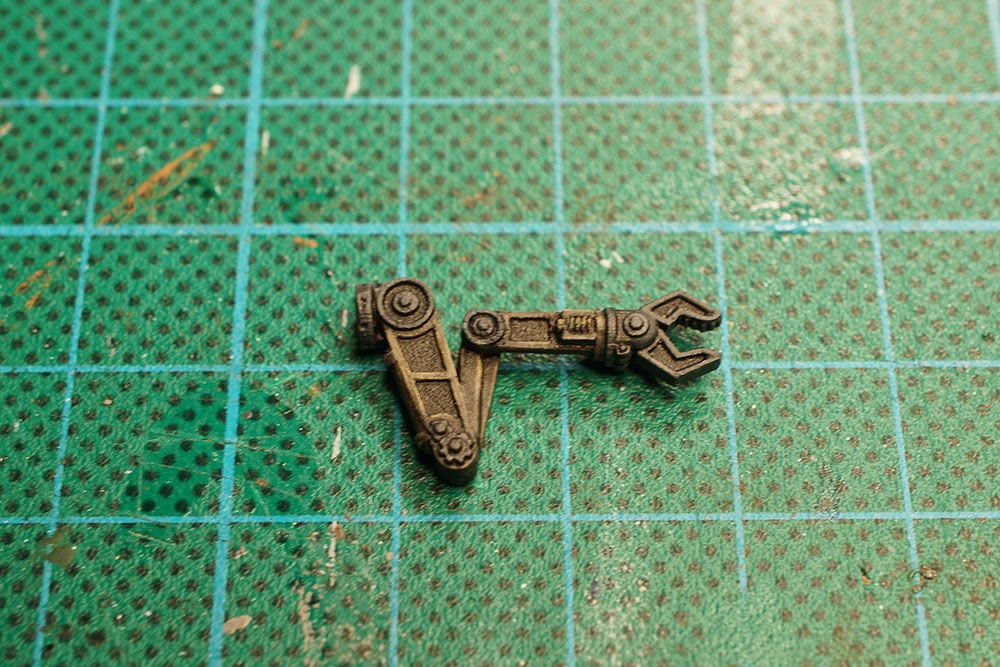 Next I applied a 1:1 mix of Cold grey and Earth to almost all the edges of the arms. I then added some Vallejo Game Color Stonewall grey to the previous mix which formed the final highlight on the arms. After this I started the first highlight on the areas painted German grey with a 2:1 mix of German Grey and Cold Grey. 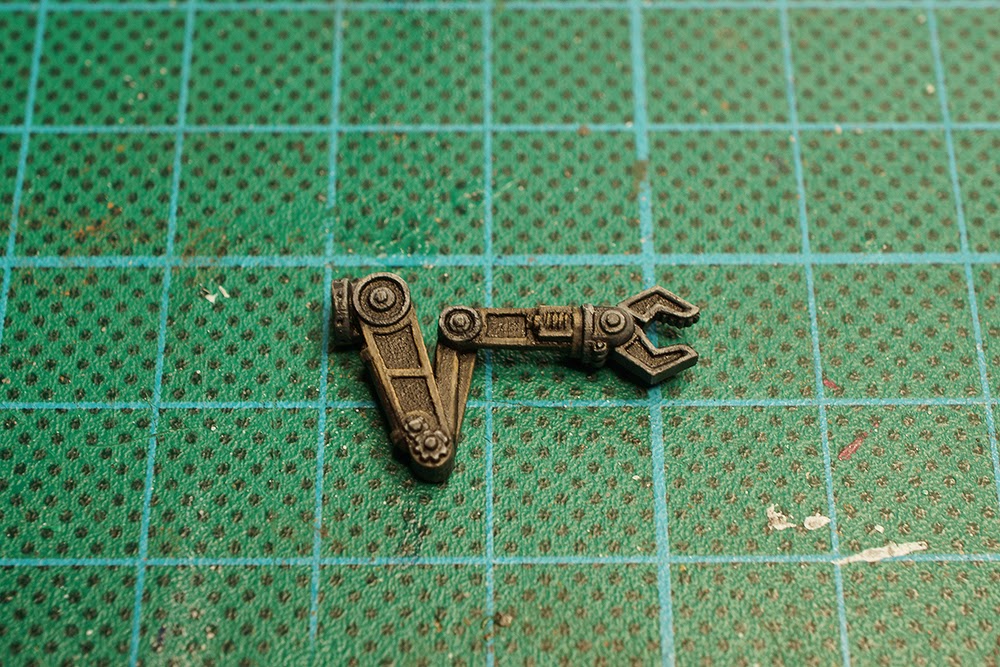 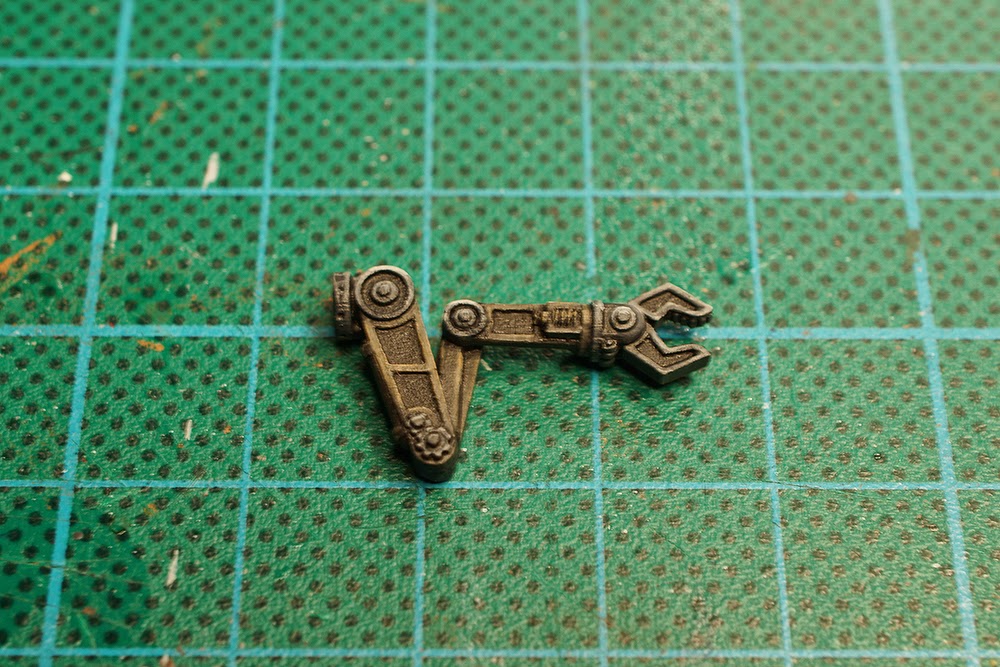 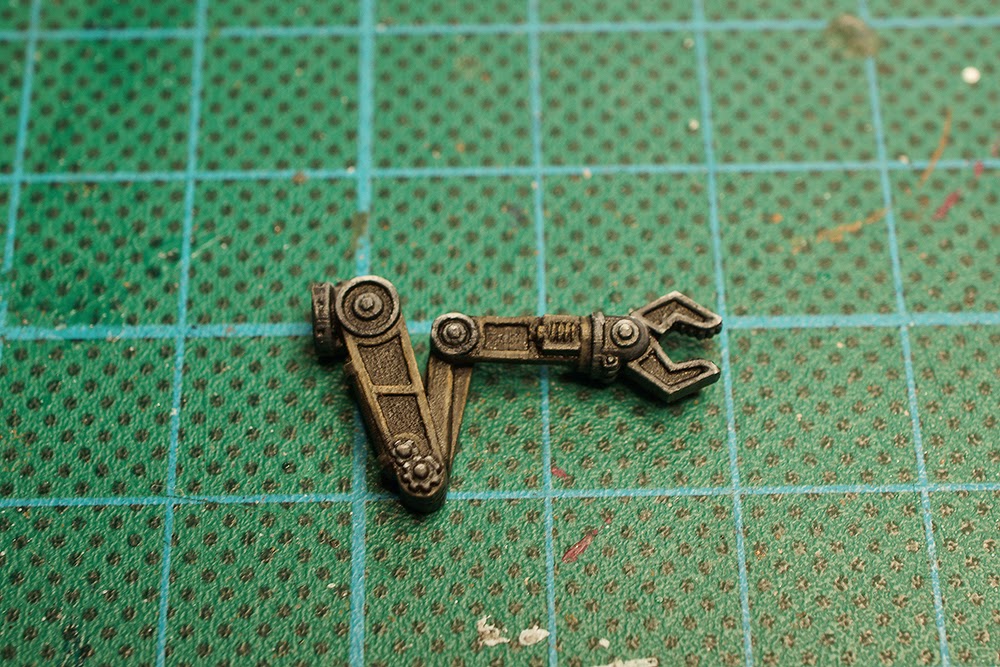 The second highlight was the same colours, just reversed ratio. The third was just plain Cold grey. The fourth and final highlight was Stonewall grey and it was almost nothing more than dots on the highest points of the claw and anchor point. 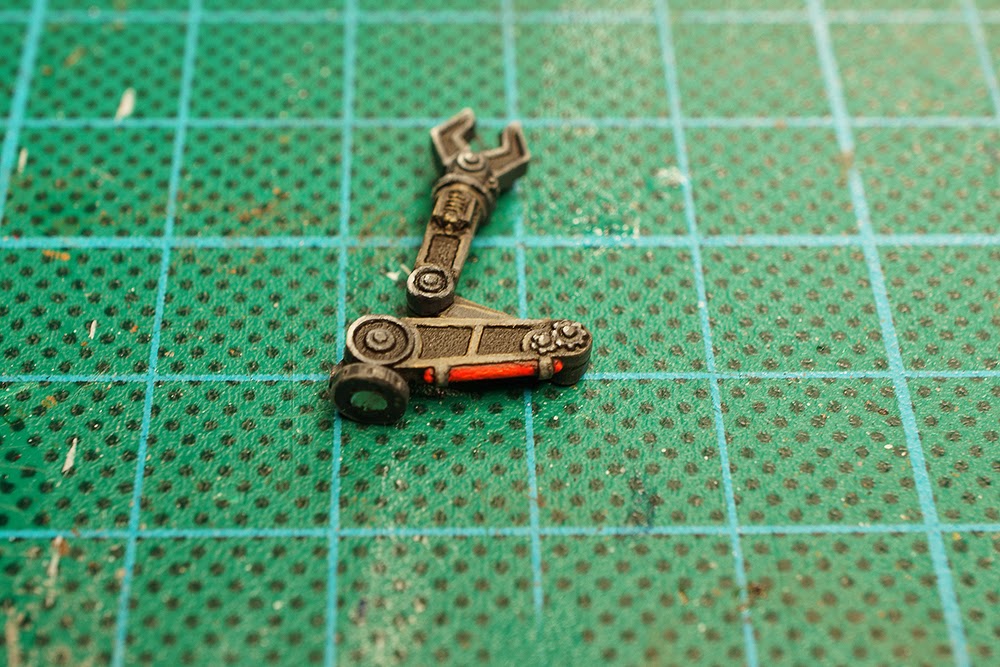 The last thing that I painted was a minor detail on the back of the first stage arm. I started with some red, in this case GW's Evil Sunz Scarlett but any bright red would do, and washed it with Army Painter's Strong tone ink. After applying the base colour I added some Vallejo Game Color Hot orange as a simple highlight. And that's all folks! Tomorrow I will post pictures of the finished model but for now this will have to do.