So I didn't post this yesterday like I had promised. My only excuse is a lack of time. In any case here it is, my B-wing paint guide! Unlike Luke's X-wing, this is a more personal take since it do not represent the ship of a specific pilot, but rather a generic Blue squadron pilot and possibly not even that. Oh well, it's my ship and I'll paint it however I want! :) 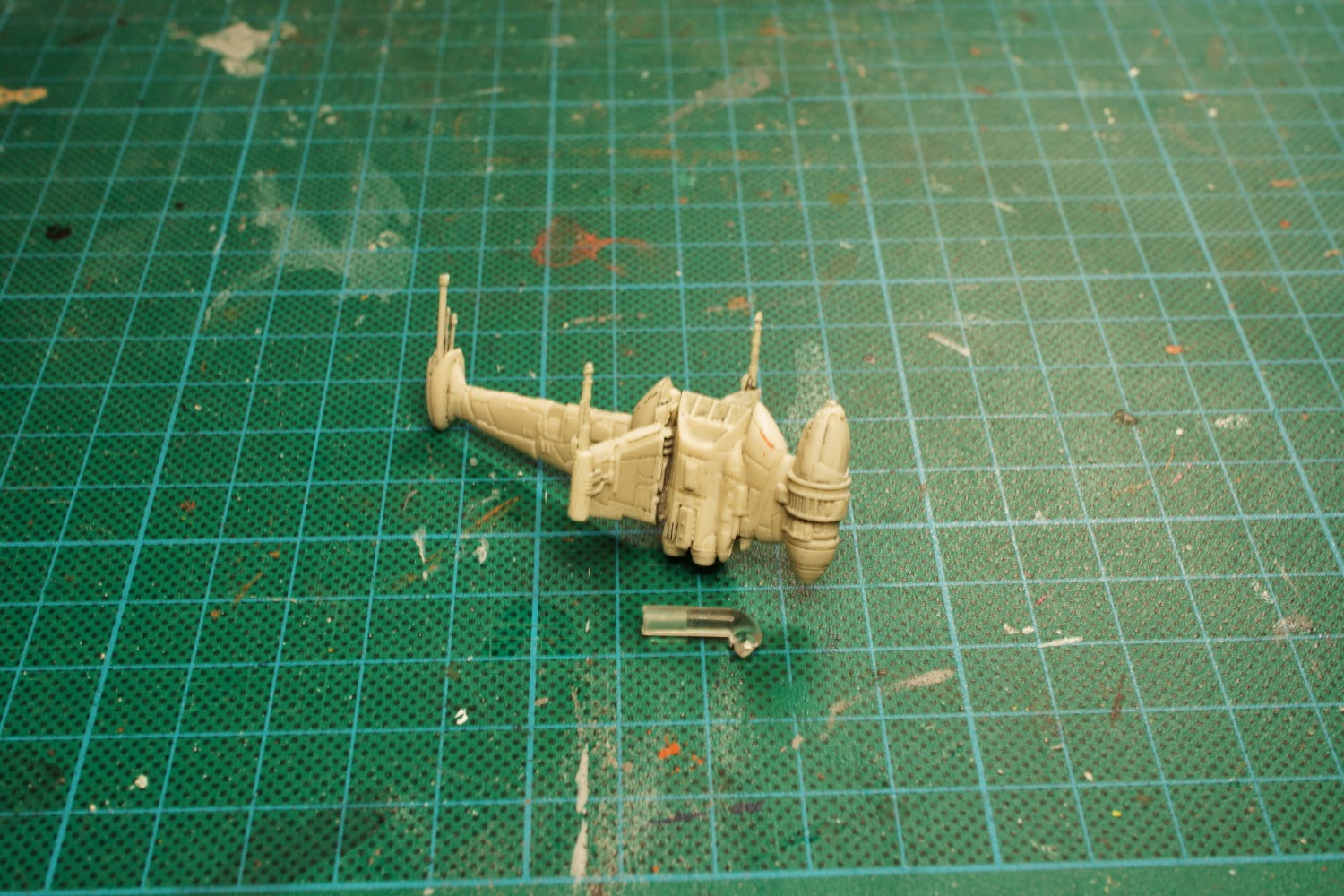 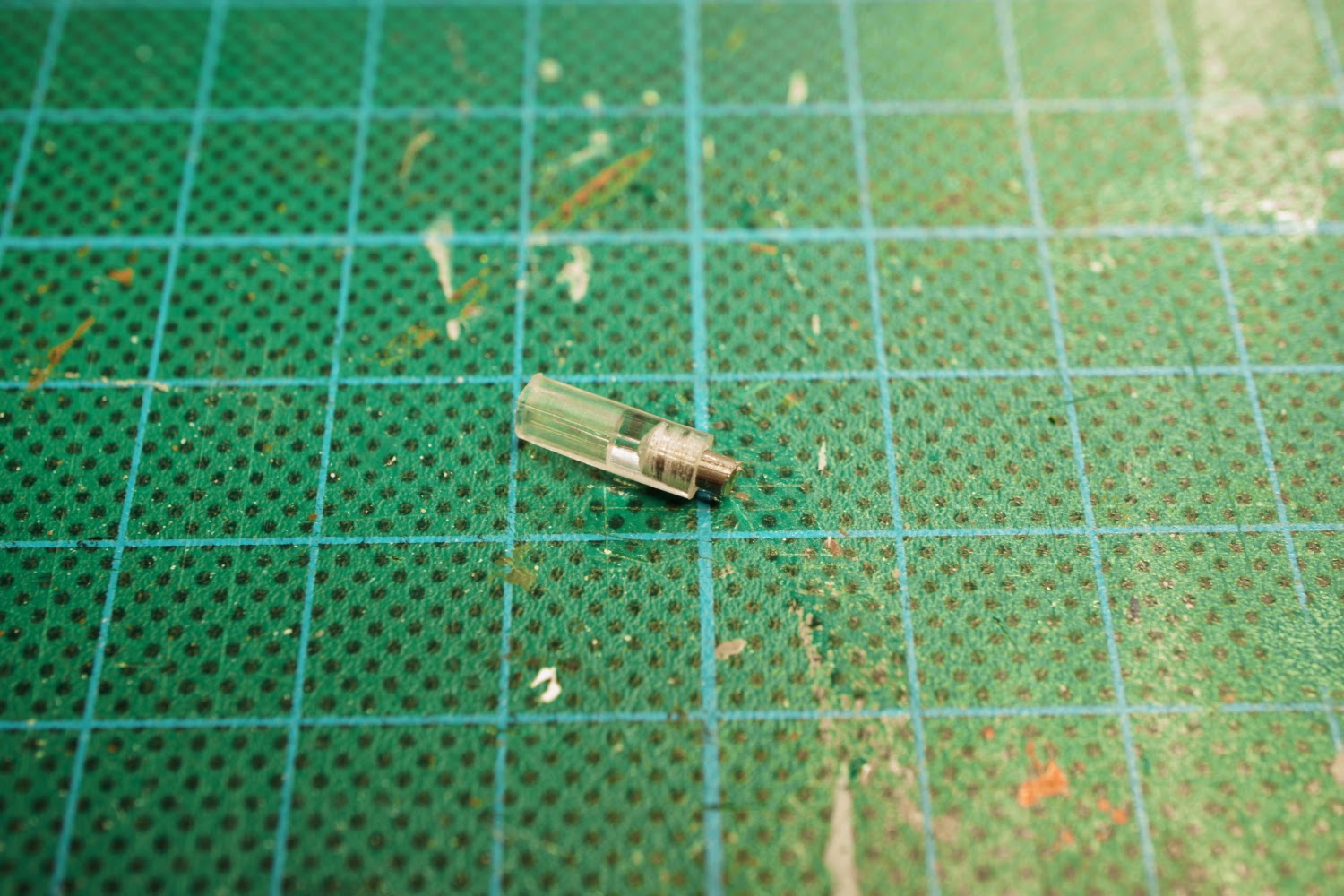 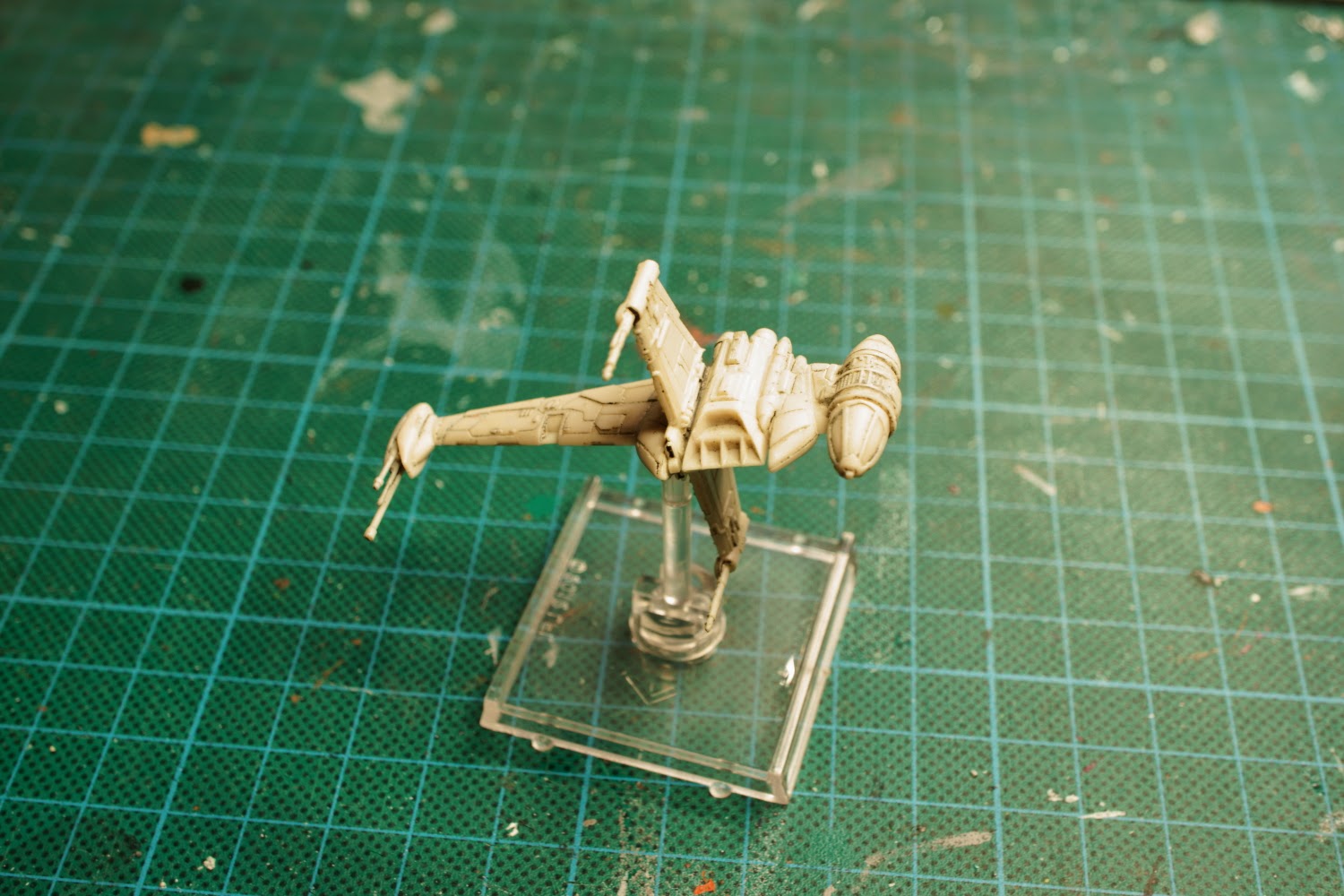 Before stripping the paint I set about converting the position of the model. I realize that the default upright position is due to practical concerns but I don't like it. To me a B-wing should 'fly' more sideways. To achieve this I removed the mounting rod and sawed off the bent part. After that I drilled a 2mm hole in the rod and pressed a short piece of piano wire into the hole. The B-wing itself got treated to a corresponding hole on the underside of the fuselage, drilled at a slight angle. Finally I shifted the position of the cockpit by cutting of the peg holding it in place, filing the edges down and re-mounting it horizontally. 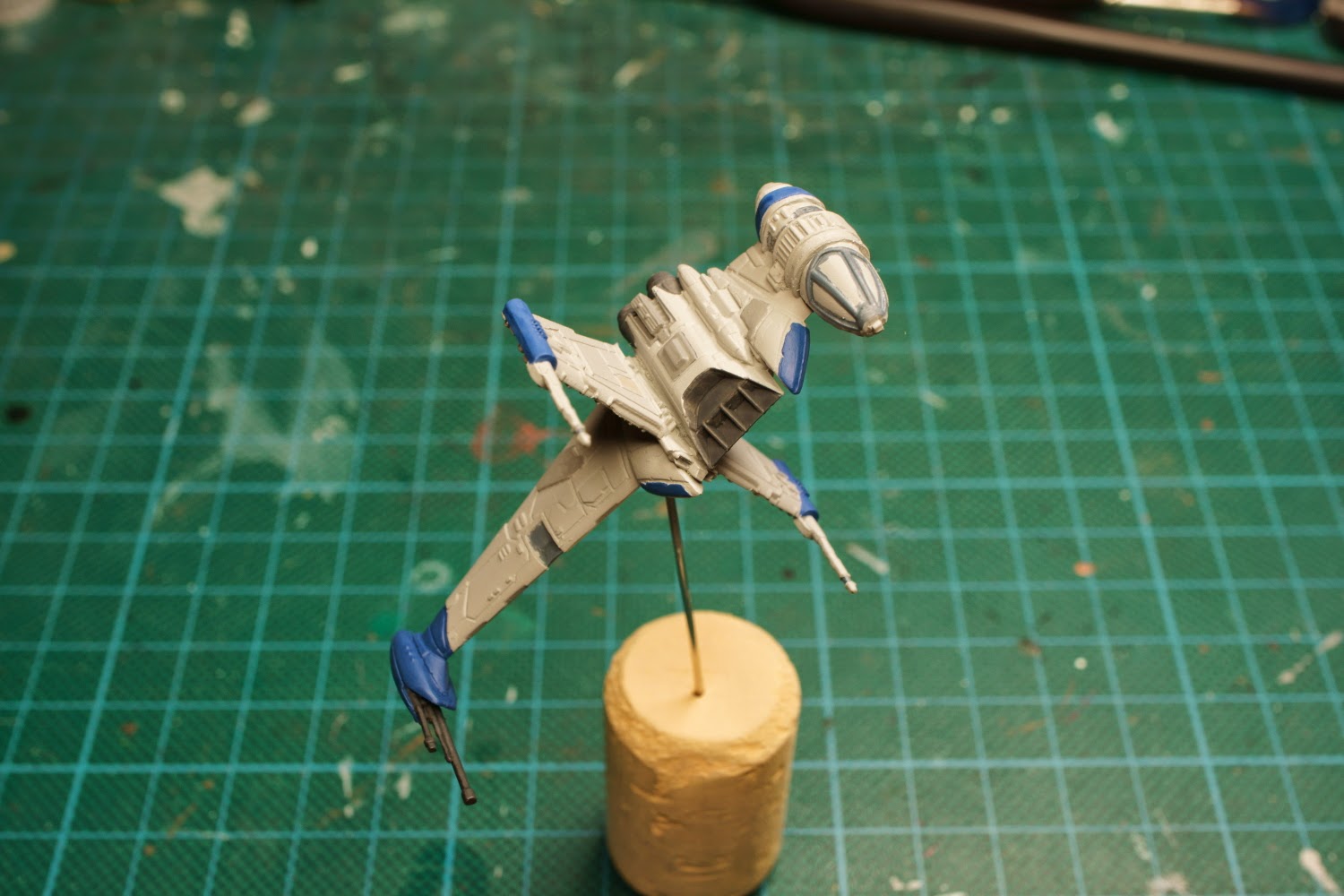 Now I could finally start painting. Many of the colours used on this model are the same as Luke's X-wing. This is how I usually paint, I decide early on what colours I should use and stick with them throughout the entire project. So for the main fuselage I used Vallejo Stonewall Grey and the blue parts were painted with Vallejo Ultramarine Blue. The engines, lower cannons and air intake was painted with a 1:1 mix of Vallejo German Grey and Vallejo Cold Grey and the exposed engine part (Looks kinda like a straight 8 cylinder petrol engine) in front of the exhaust, the exposed underside of each gunpod and the 'square' behind the air intake with plain Cold Grey. The rim around the cockpit windows, the depression at the middle of the lower wing and a circular depression behind the cockpit was painted with a 1:1 mix of GW The Fang and Cold Grey. As a final touch I added some different shades of grey to a few of the panels. 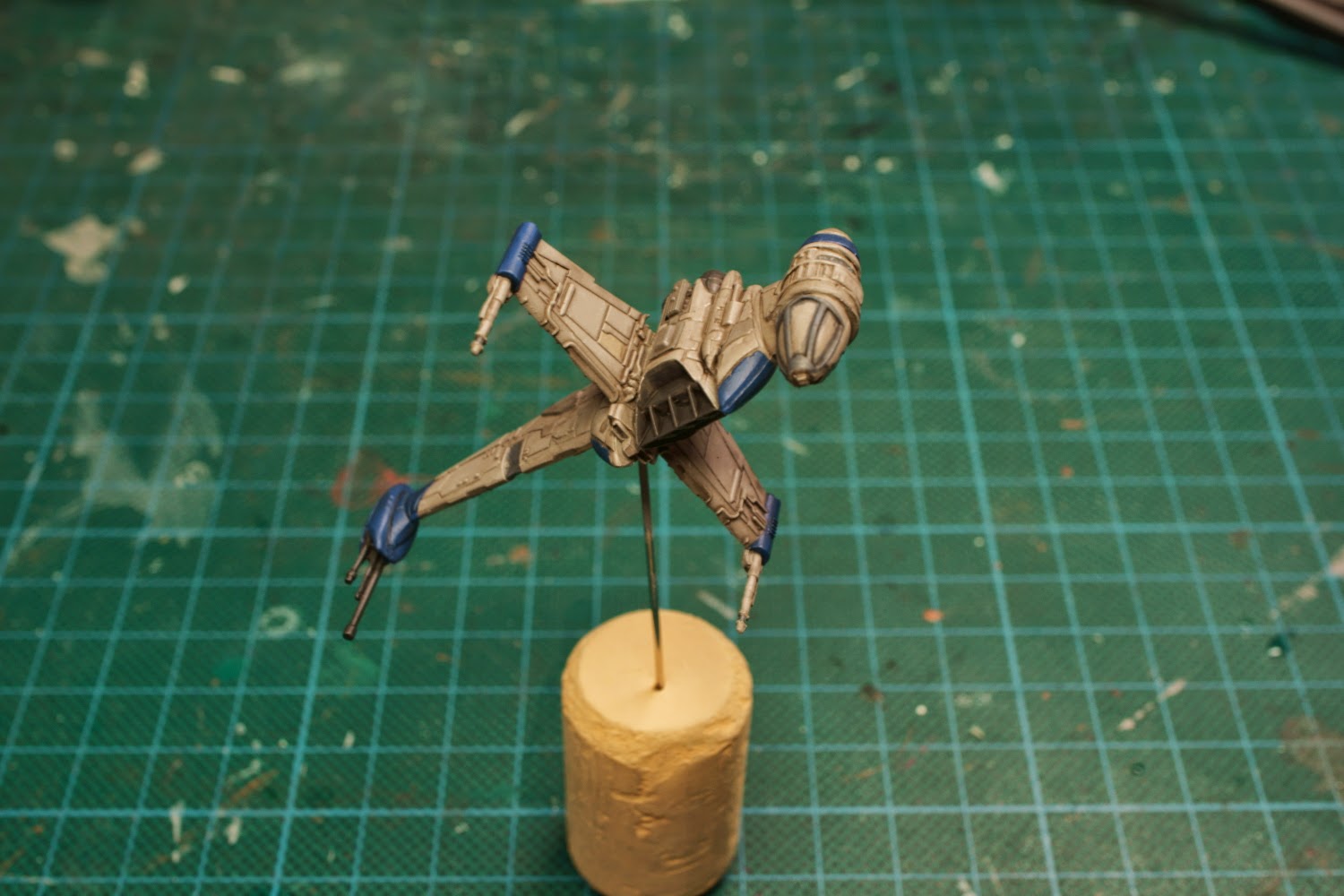 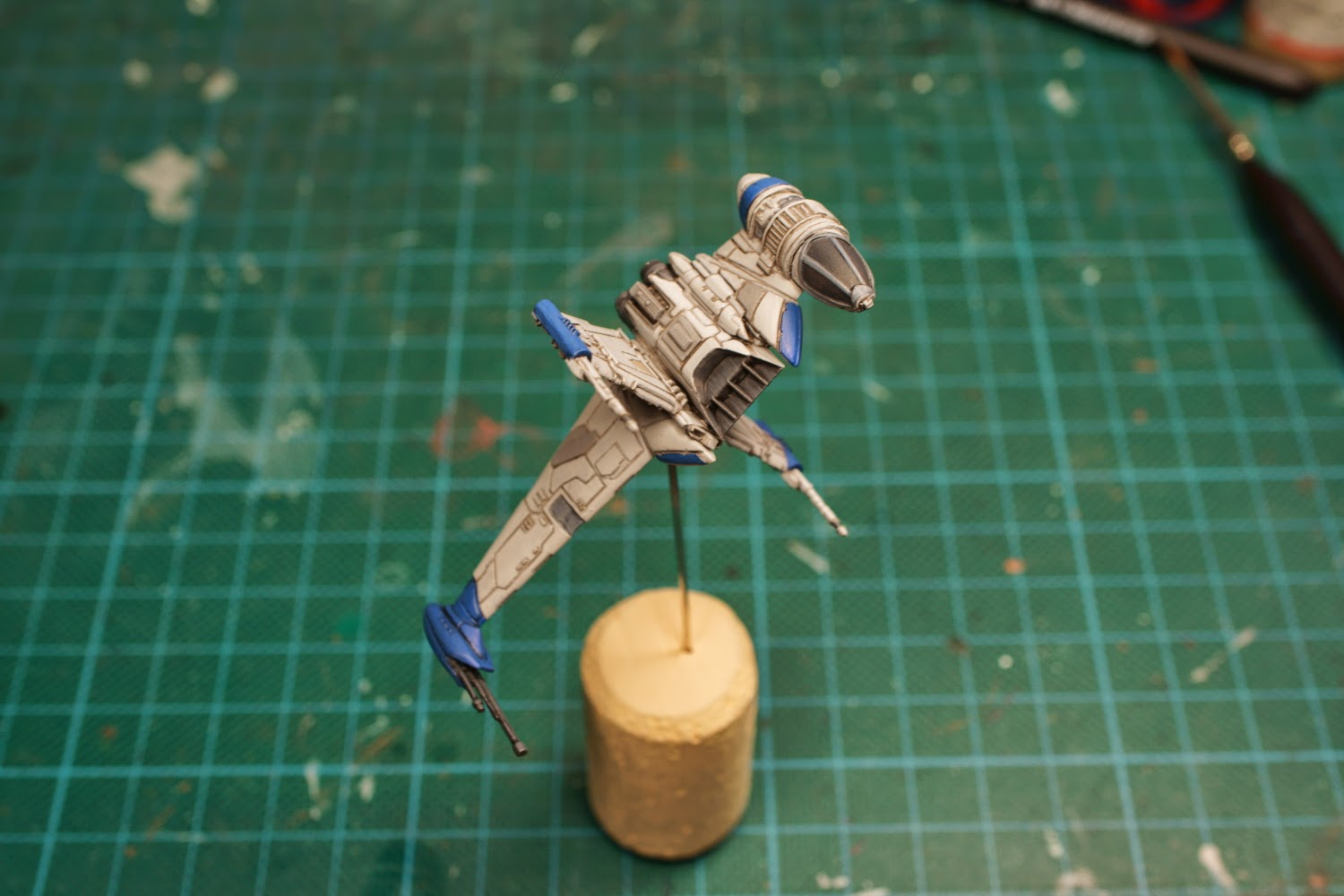 The following steps are the exact same ones as with Luke's X-wing so I'll just copy and paste from the previous paint guide: 'Next I shaded the entire model with a 1:4 mix of Army Painter Strong Tone ink and Army Painter Dark Tone ink. I brushed this on quite thinly as I didn't want any of the wash to pool or dry unevenly. After that I re-applied the base colours, leaving the wash showing in the recesses'

Not all things were the same though. When reapplying the base colour to the air intake I did it in many small thin streaks to represent fine damage and dirt that has been sucked into the engine and I also washed the 'petrol engine' with pure Dark Tone ink. 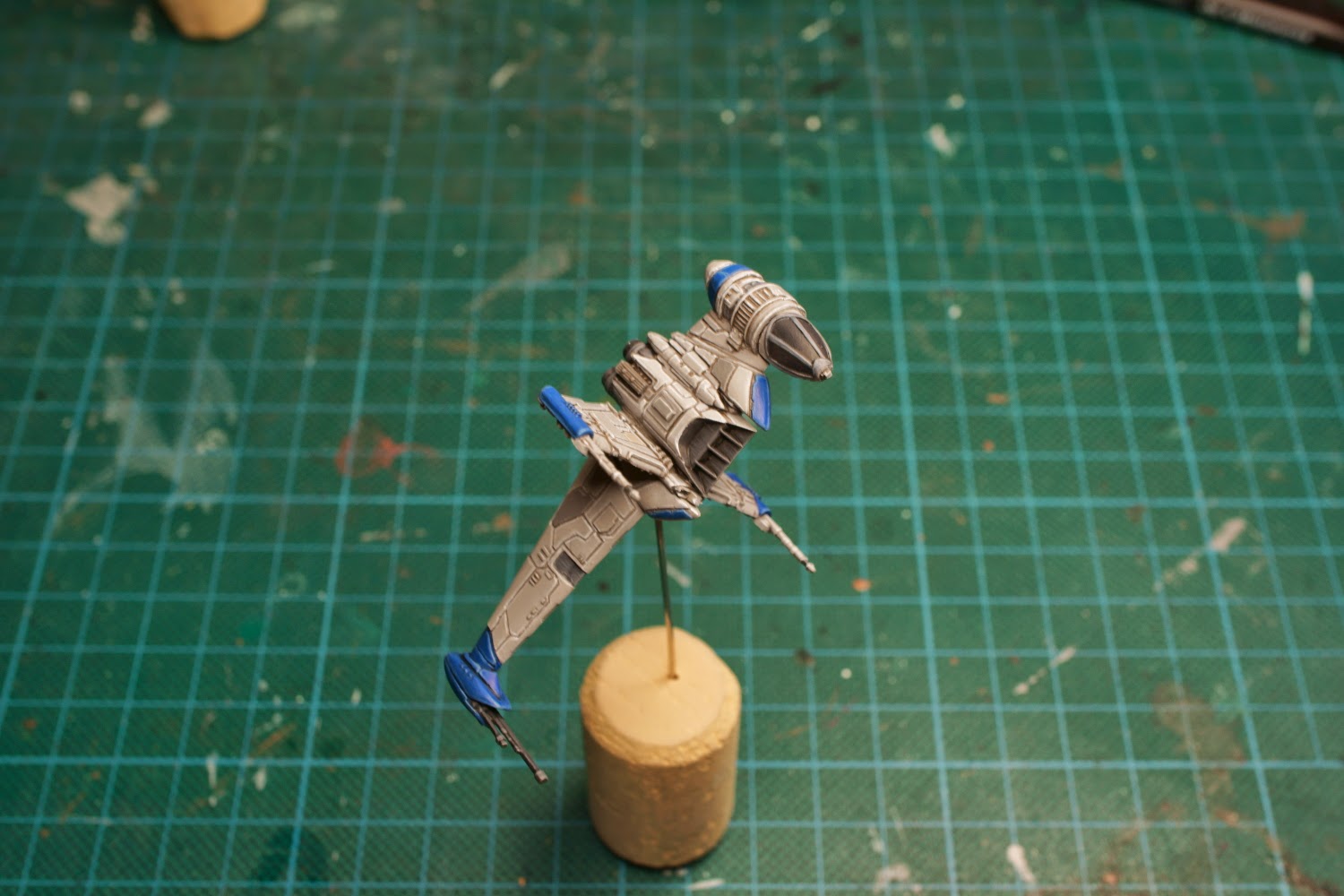 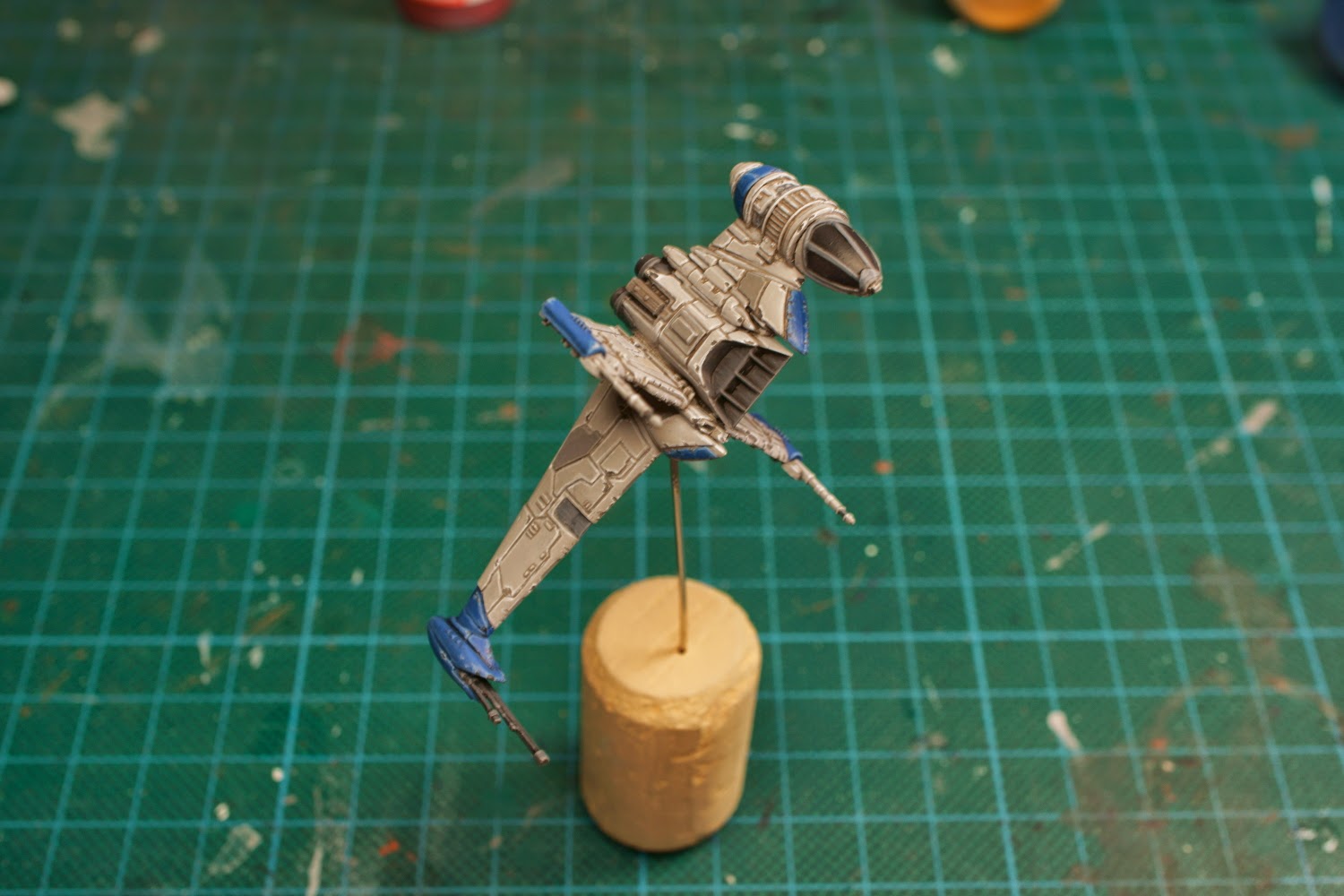 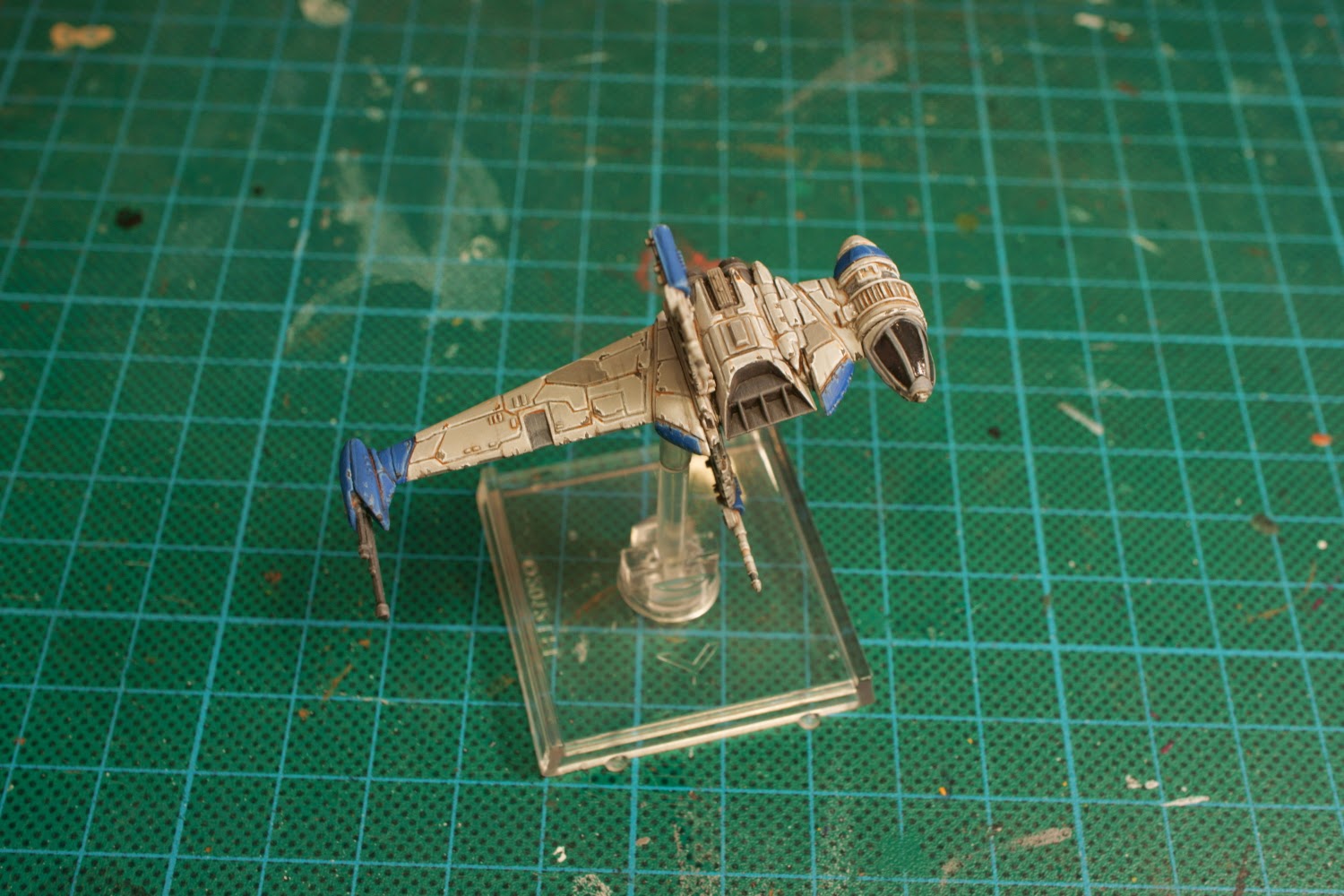 Weathering was similar to Luke's X-wing so I have copied parts of the previous paint guide. Yes I can be quite lazy. Anyway, chipping on the basecoat was done by first painting Dead White where I wanted the chipping, followed by patches of thin German Grey, taking care not completely cover the white. The German Grey was not really painted but rather almost stippled on to create a more natural look. The blue got a similar treatment but with the final highlight mix first, then the basecoat and finally German Grey. I took care to place most chipped areas to the front of the model so it looked more natural. Some rust was added by painting thinned out Vallejo Parasite Brown in several recesses. I added some dirt/soot streaks on the wings in the form of a couple of thin layers of Dark Tone Ink. After spraying the model with matte varnish I added the final touch to the cockpit windows by painting them with gloss varnish. 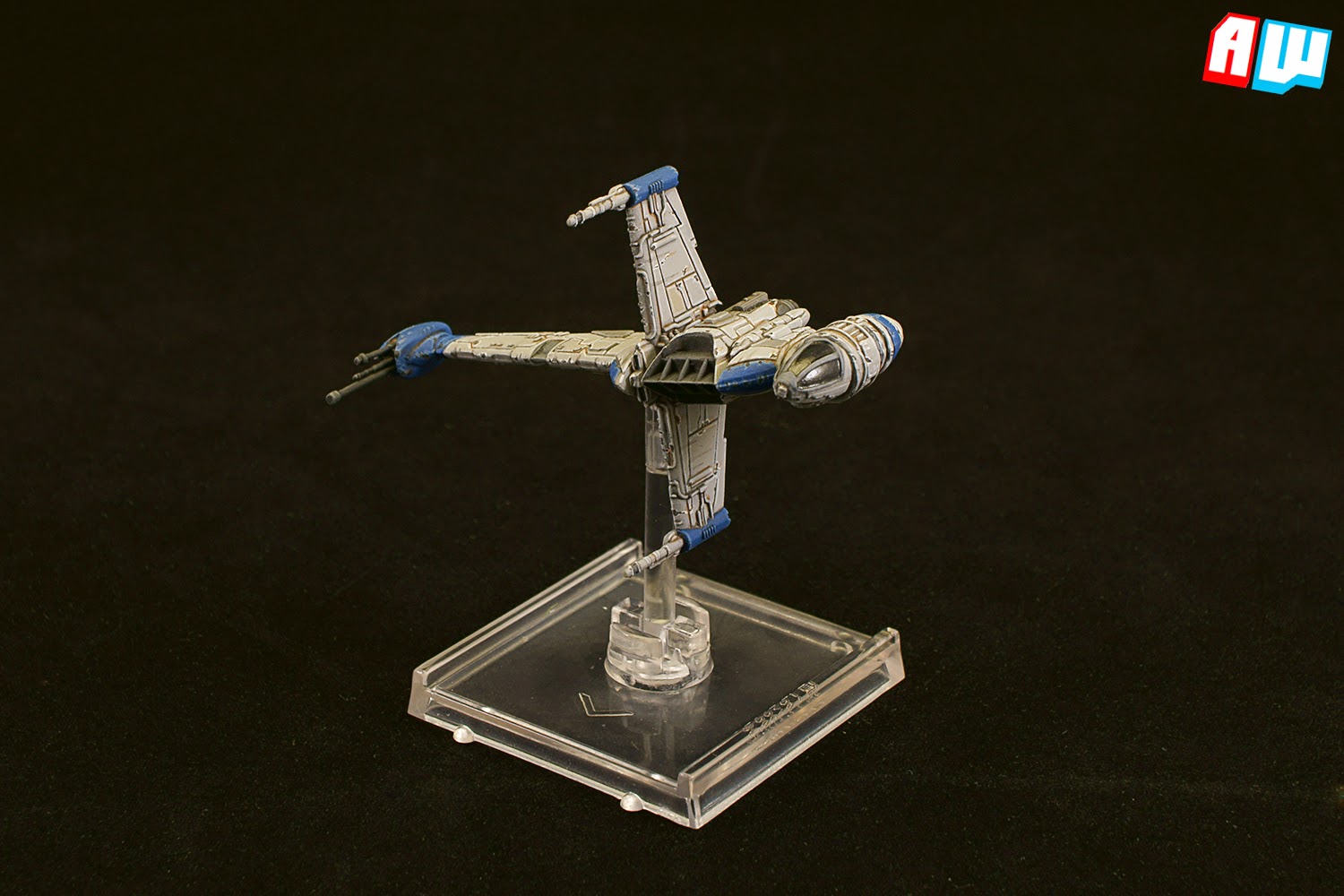 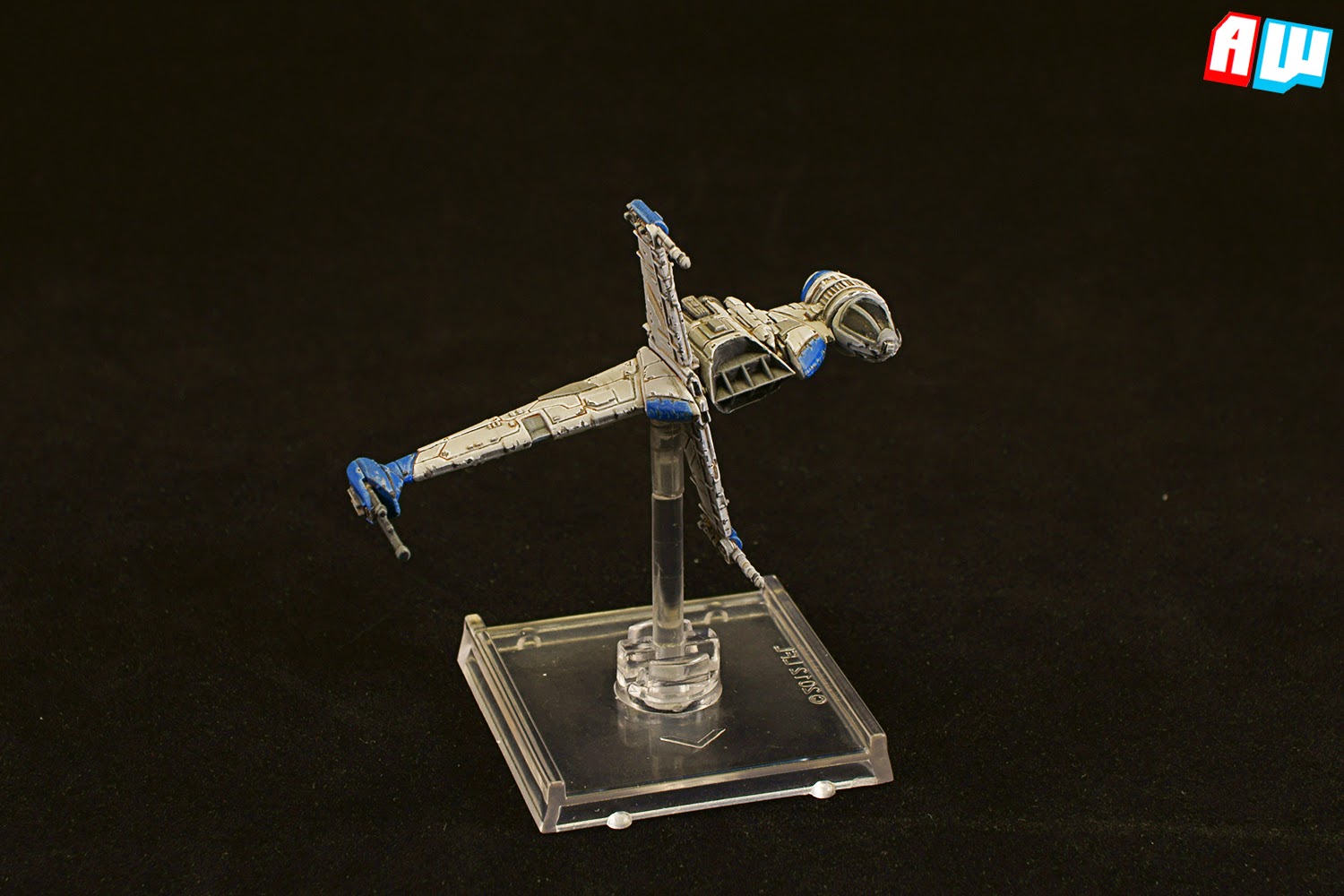 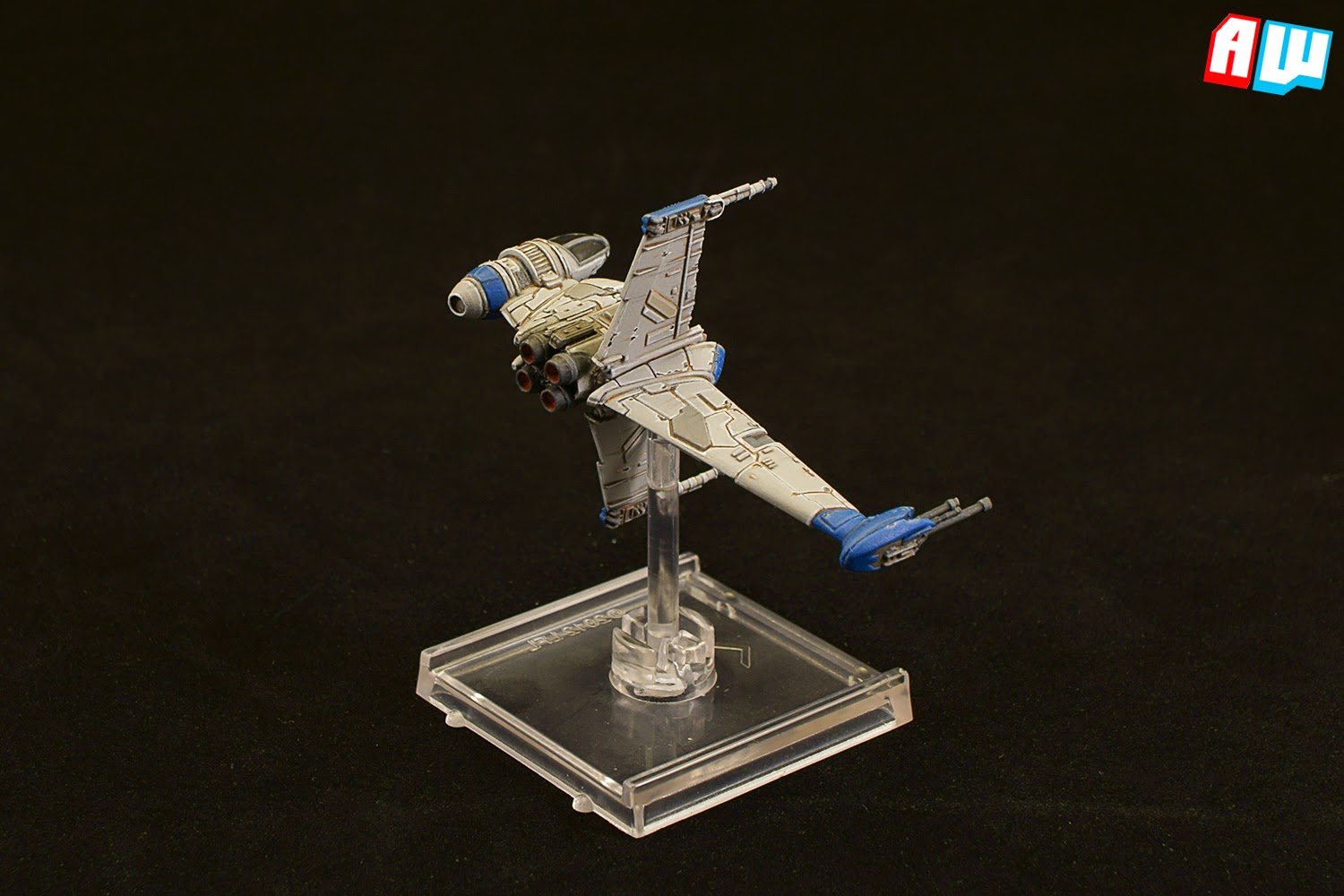 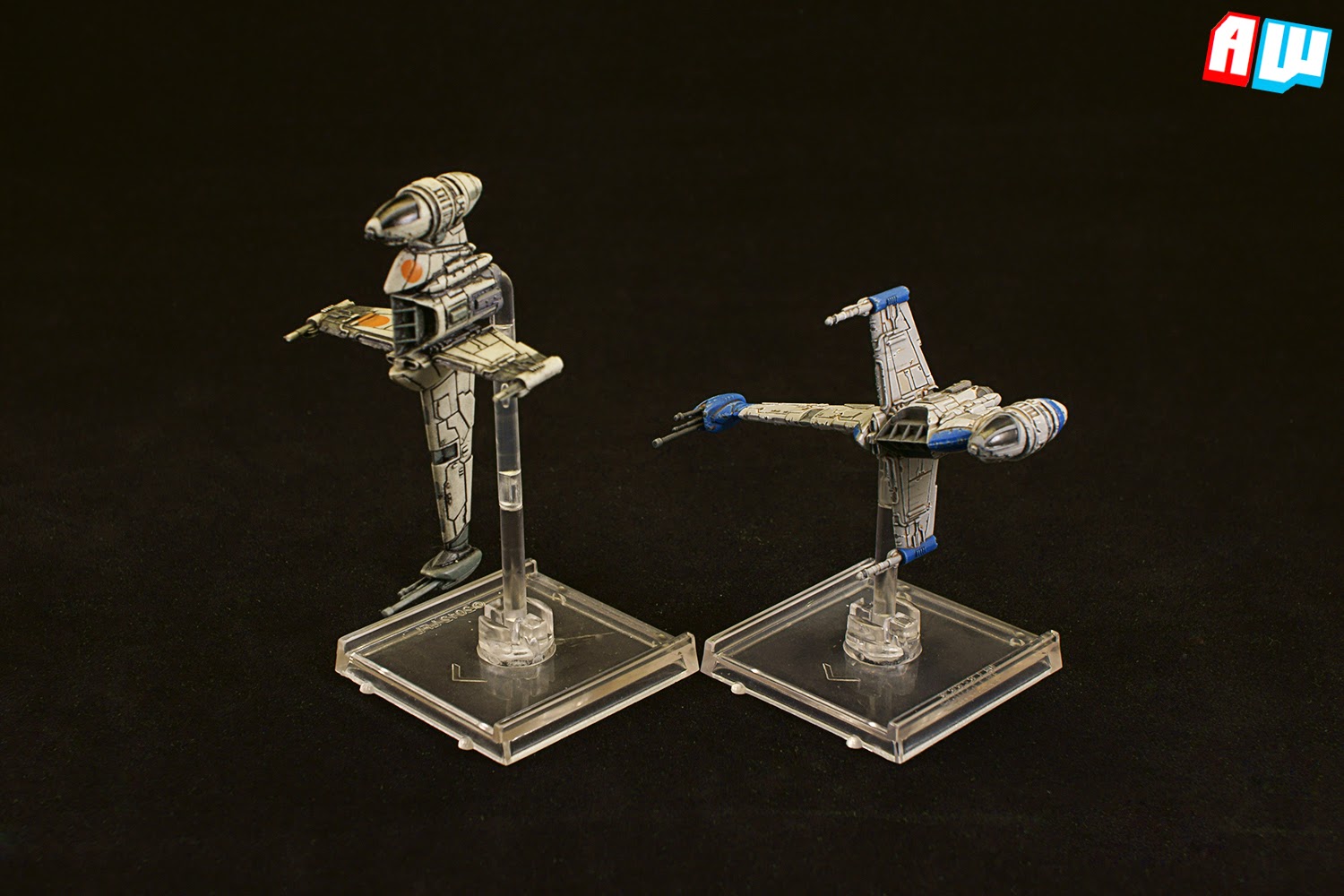 I'm quite pleased with this one and it also the one of my X-wing repaints that gets the most raised eyebrows. I'm pretty sure this is because of the changed position as it is an immediate clue that the model has been changed in at least one way.
Upplagd av Macross_VF1 kl. 19:30:00