How to paint Kath Scarlet's Firespray

So now I'm ready to show how I painted Kath Scarlet's Firespray. 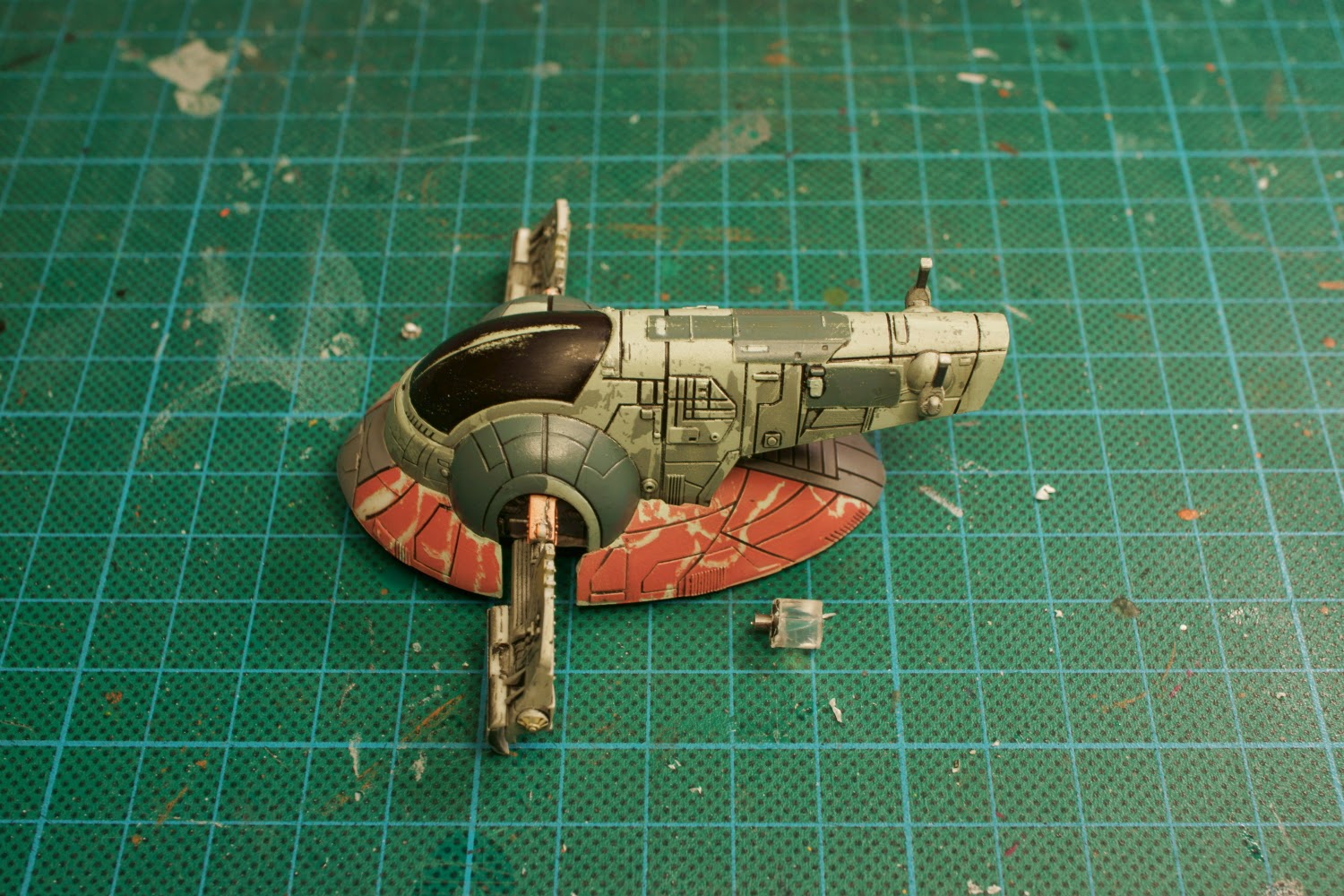 The first step didn't involve any painting at all, but rather the removal of mould lines and gently sanding down the gloss paint on the cockpit window. I did this to ensure that any subsequent layers of paint would get a good grip on the surface. The mounting peg also had to be removed and since doing this almost always breaks them (the part still stuck inside the model that is) I fabricated a 2mm replacement pin to it. 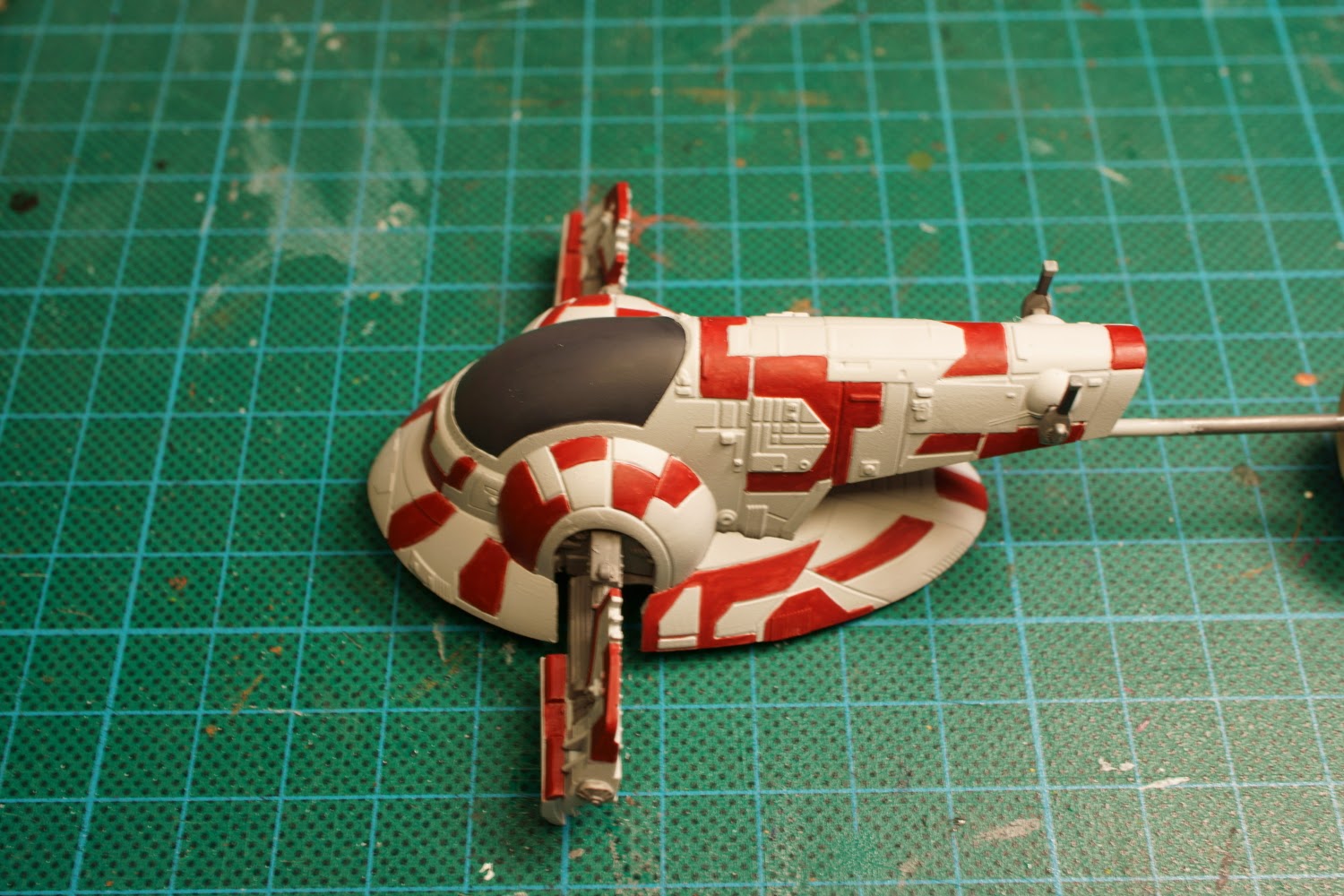 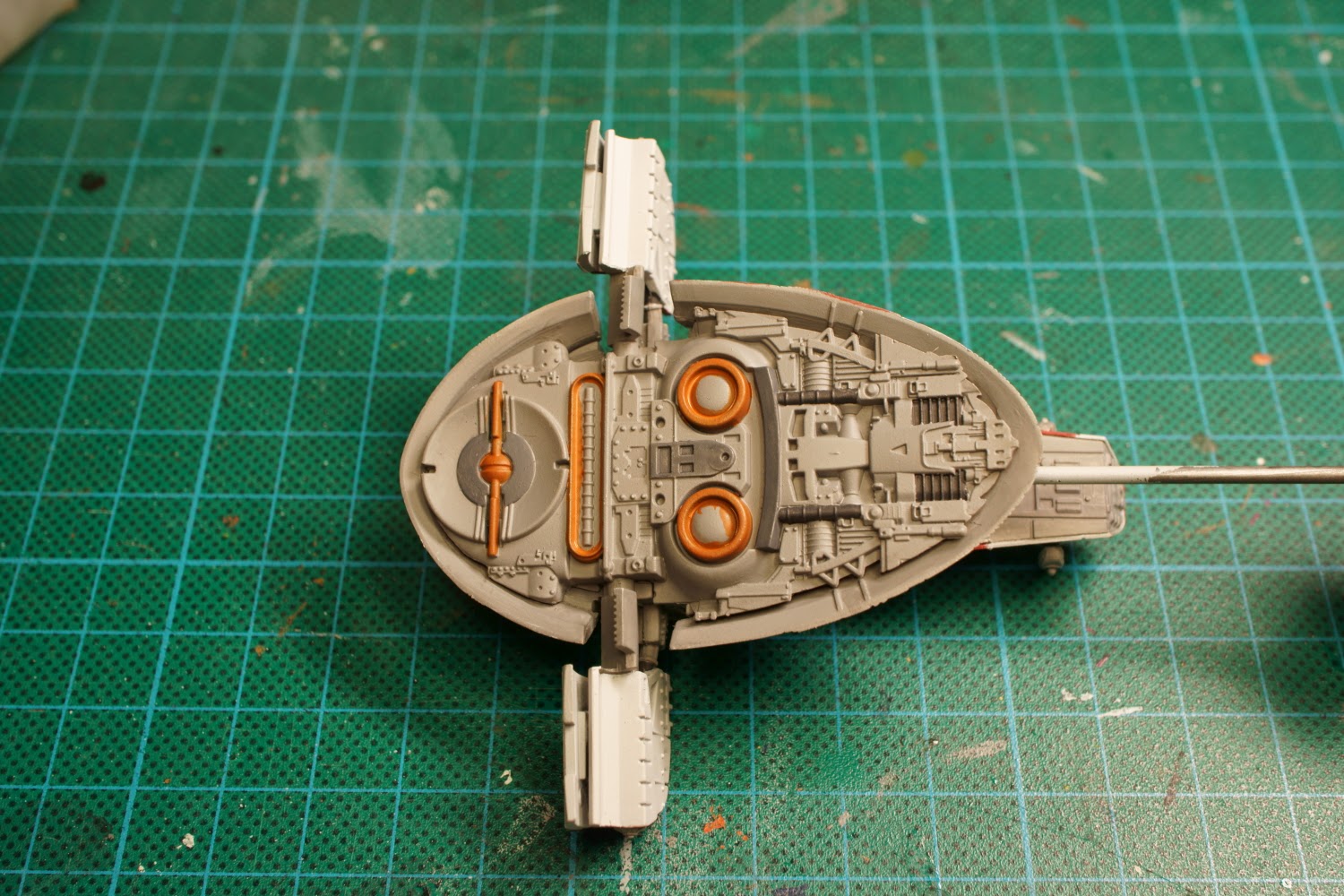 Vallejo USN Ghost Grey primer went on first followed by a basecoat of a 1:1 mix of Vallejo Stonewall Grey and Dead White. The back was masked off and got a coat of Vallejo Cold Grey. After that I started picking out basic details. I used Vallejo Scarlett Red (A very fitting colour for this model I would say) on the red panels and I made sure to give the model a slightly asymmetrical paint scheme. The guns were painted with Cold Grey and the barrels were later painted with Vallejo German Grey as was the cockpit window. On the other side of the ship, I picked out the engines and the middle of the 'satellite dish' with Vallejo Beasty Brown. I also painted out some details with a 1:1 mix of German Grey and Cold Grey and some others with pure German Grey. 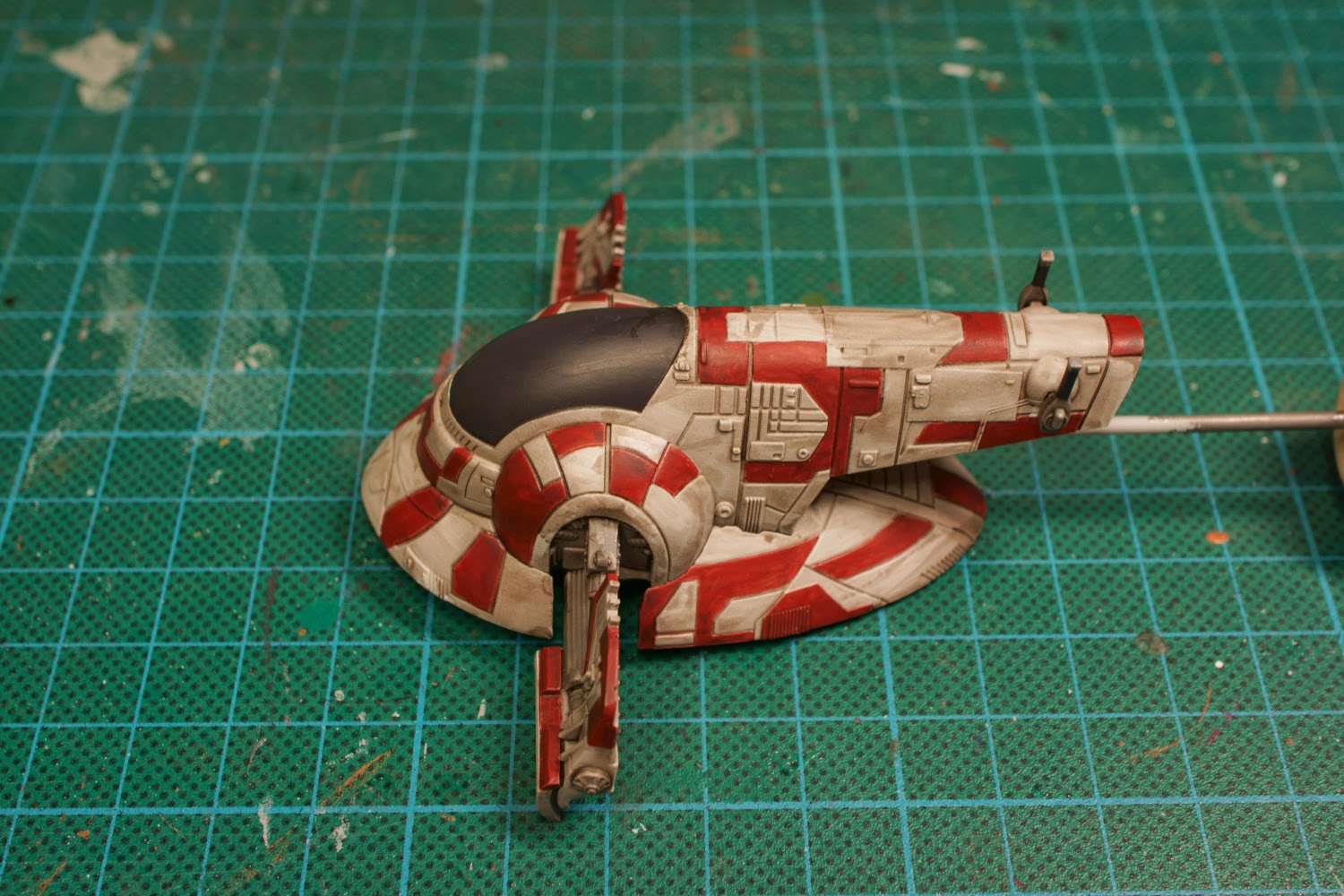 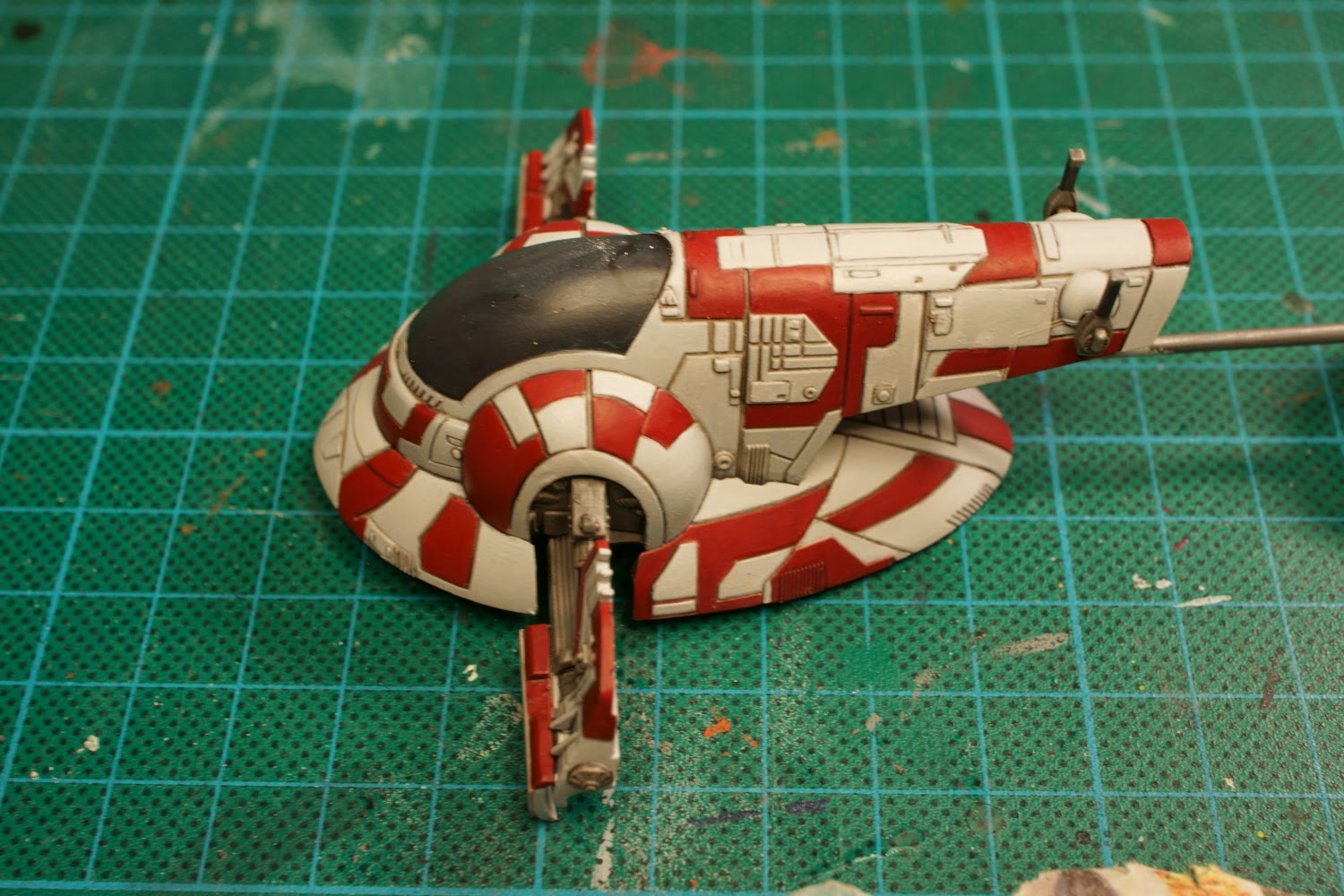 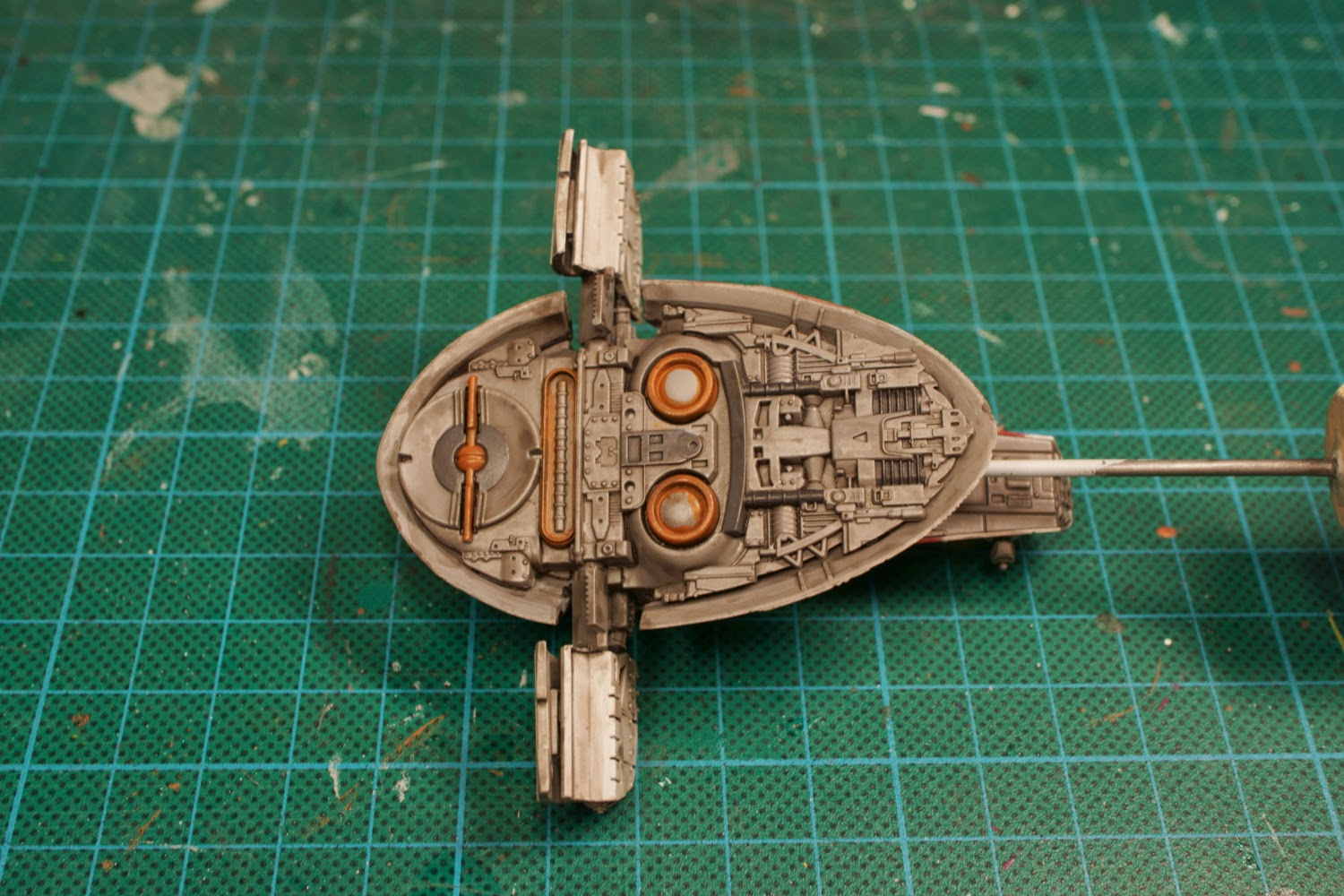 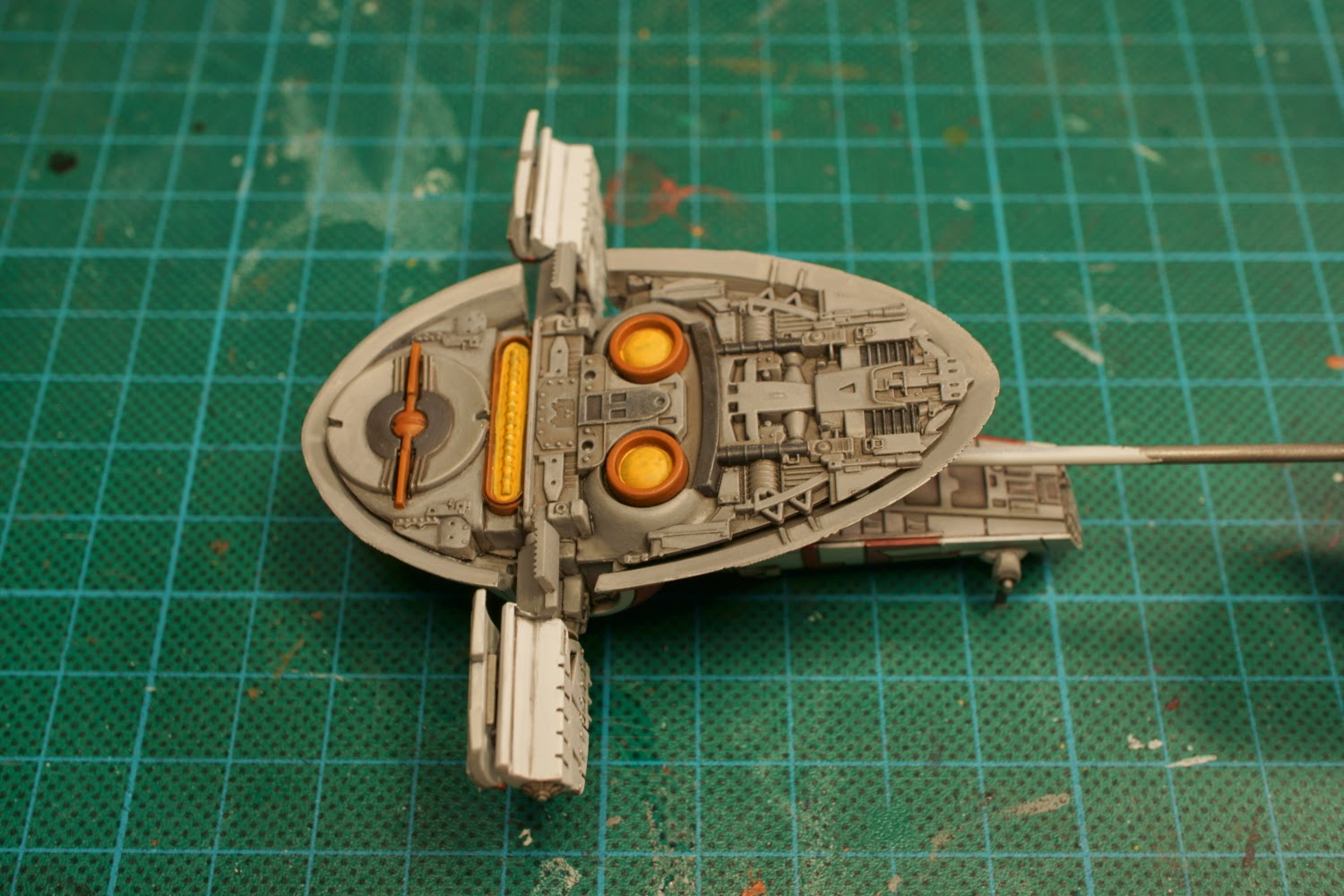 The entire model was washed with a 4:1 mix of Army Painter's Dark Tone and Strong Tone inks. After that I began the time-consuming job of restoring the base colours. On the back I first dry brushed on base Cold Grey to make it easier to see where I would have to spend my effort cleaning up the model. Some areas were left untouched to simulate dirty/neglected places. The inside of the engines were picked out with Vallejo Plague Brown. 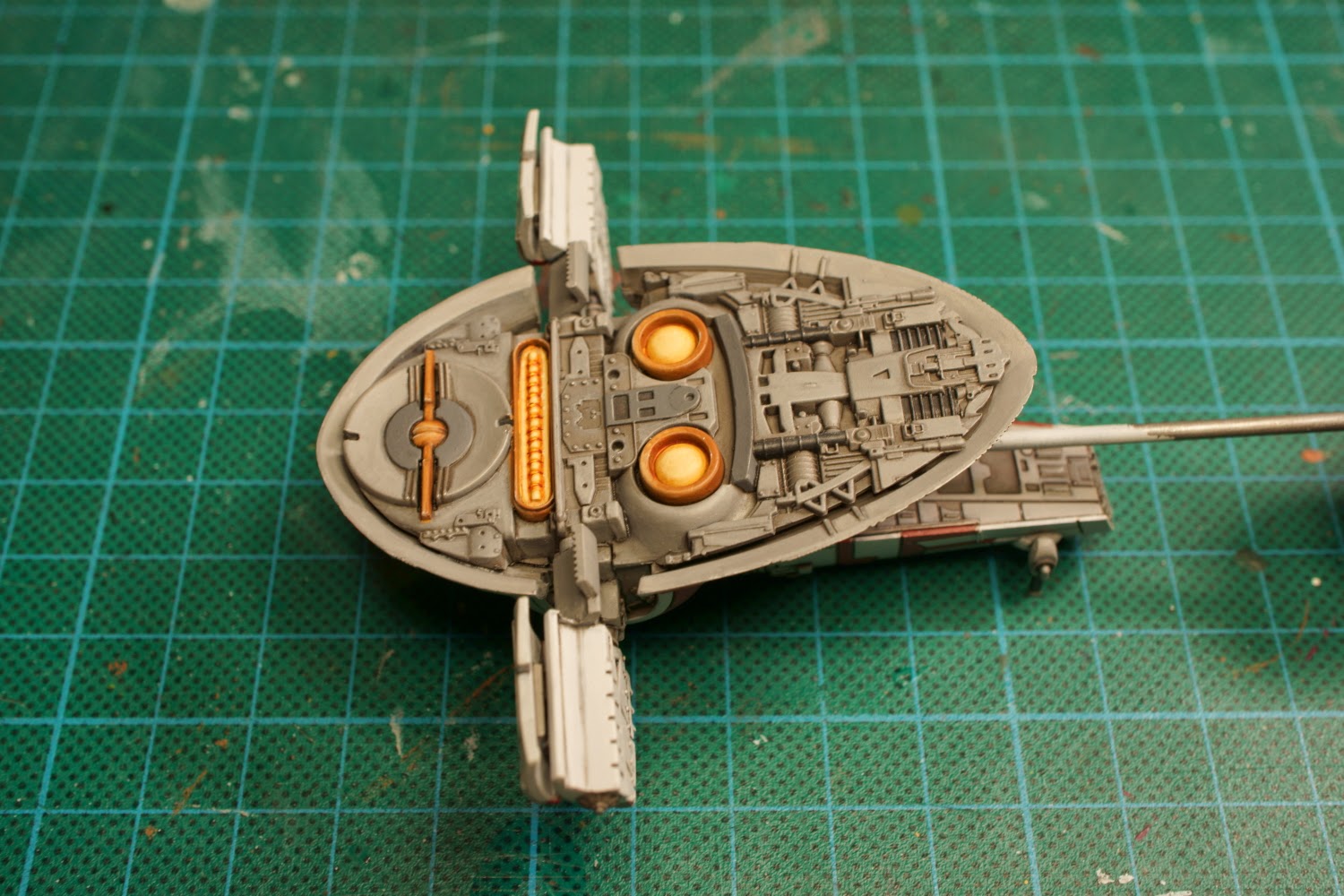 Next I continued on the engines and the middle of the 'satellite dish'. I wanted to give them a slightly metallic look so by using NMM techniques I first gradually added Plague Brown to the base Beasty Brown. When I had reached about about a 1:1 mix of both colours I started adding small amounts of Vallejo Khaki and when the mix was bright enough (gut feeling on that one) I added some Dead White to form the final highlight.

The engine glow on the other hand I made by first painting some old GW Baal Red directly in the recesses, especially the 'heater' in the middle of the upper exhaust. This was not quite enough however so I manually painted the 'rings' on the 'heater' with Scarlett Red followed by GW Evil Sunz Scarlett, Vallejo Hot Orange, and finally P3 Cygnus Yellow. I did this to give the impression that this area was hotter than the rest of the exhaust. The glow was built up using Plague Brown with Khaki gradually mixed in. I will admit that my choice of colours was not the most prudent. The exhausts  utilized the same colours as the engine glow, making them a bit too close to each other. It would have been better to start with another, darker, brown when painting the exhausts. I did alleviate the problem later as I made the engine glow even brighter by adding some white to the mix. 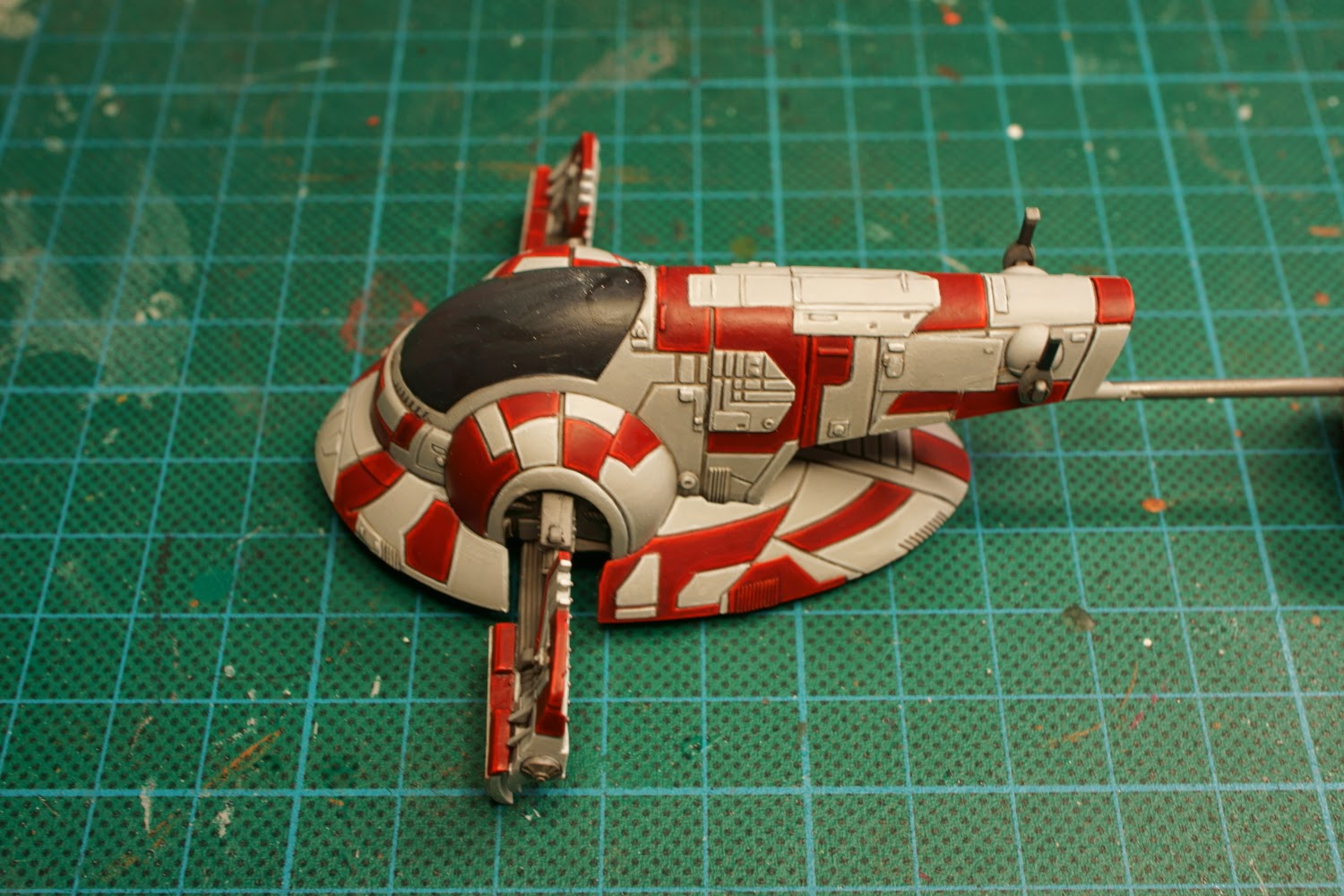 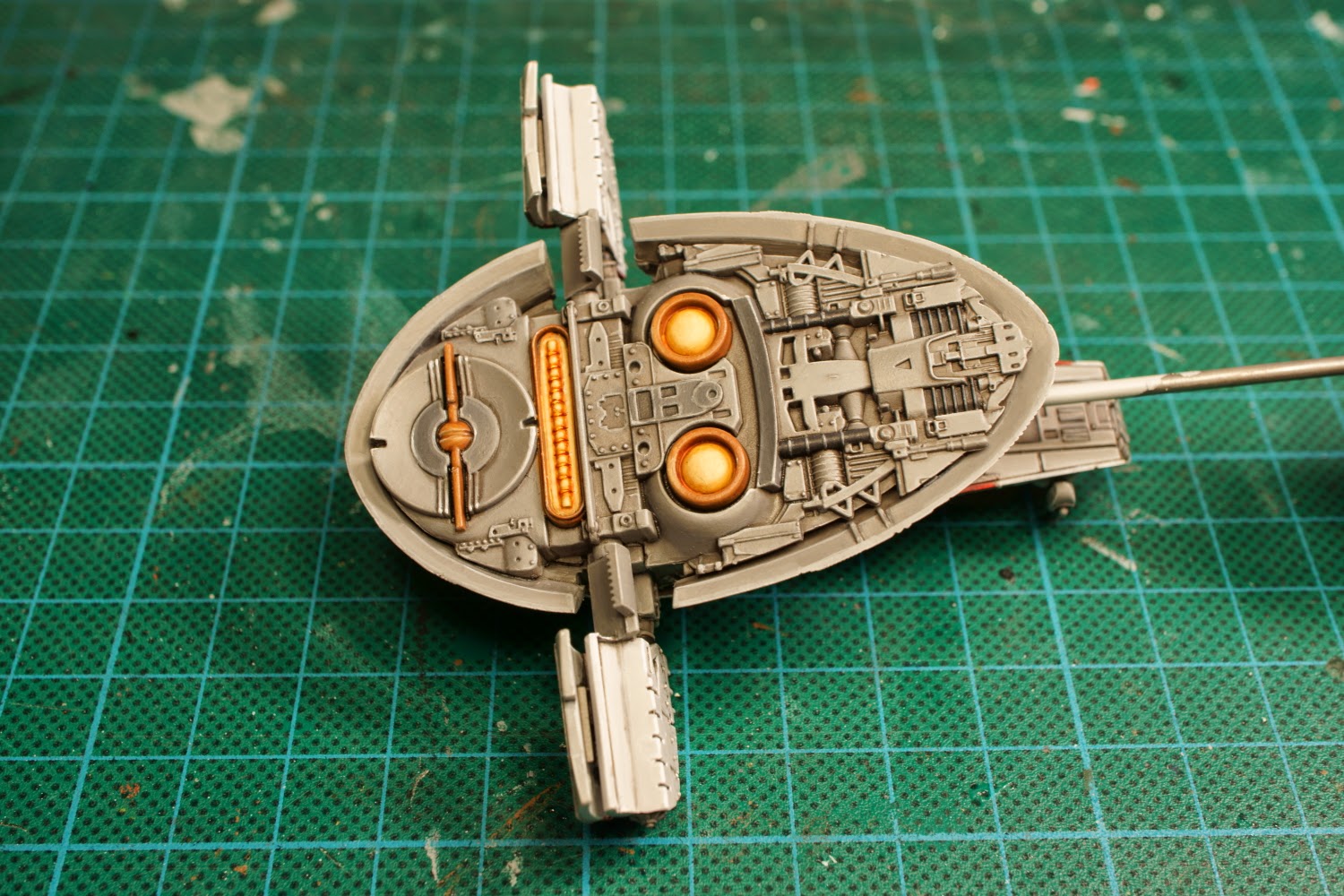 Next on the agenda, highlights! The white panels were simply highlighted with Dead White. Remember, the white was not actually truly white, but a very bright grey as otherwise it would be impossible to highlight the areas. The red was first painted with a fairly wide band of a 1:1 mix of Scarlett Red and Evil Sunz Scarlet followed by a thinner line of pure Evil Sunz Scarlet. The most prominent edges were later picked out with a 1:2 mix of Evil Sunz Scarlett and Hot Orange. The Back was first highlighted with a 1:1 mix Cold Grey and Stonewall Grey followed by pure Stonewall Grey. I didn't dare make the highlight any brighter as otherwise it would start get too close to the white areas in colour. 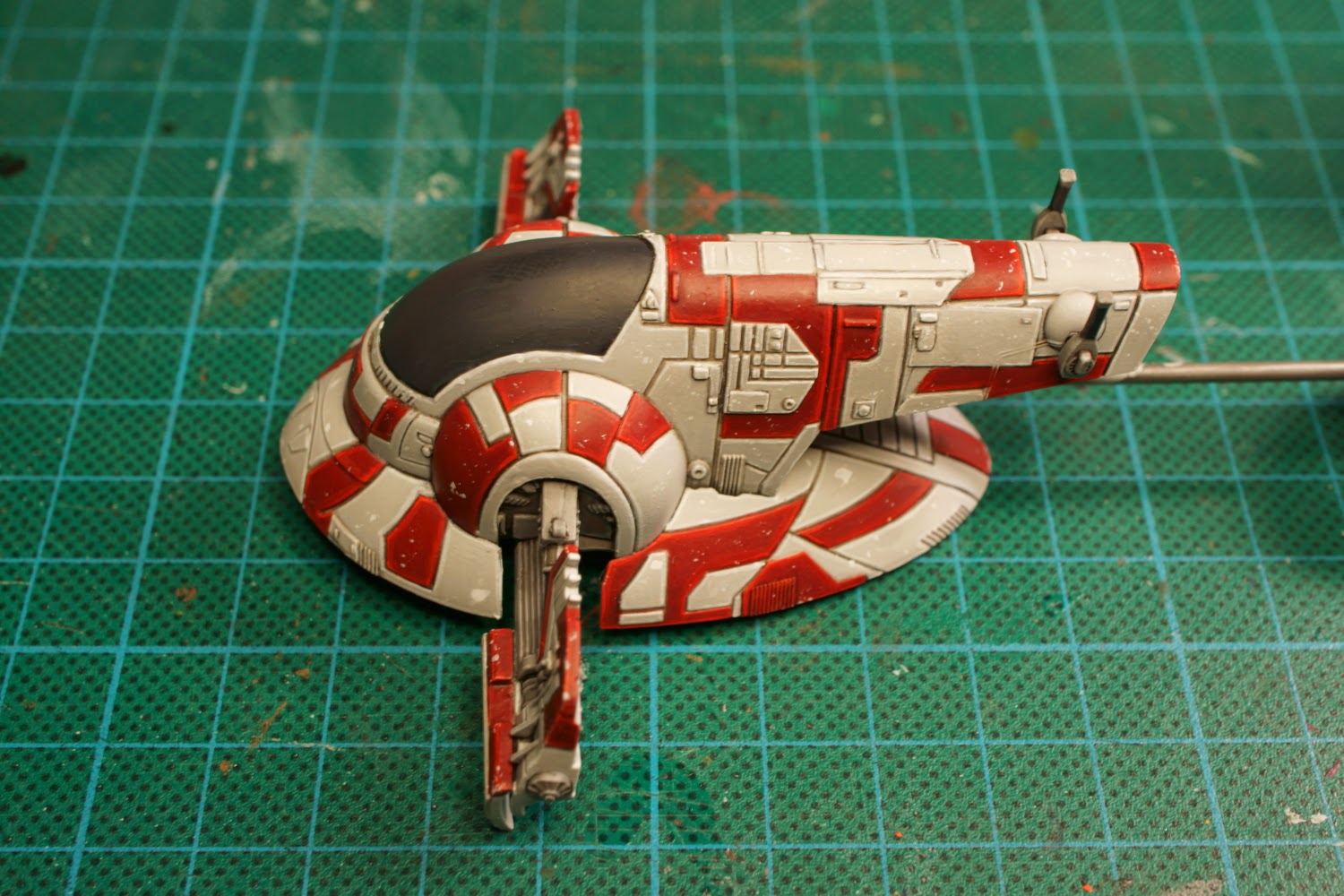 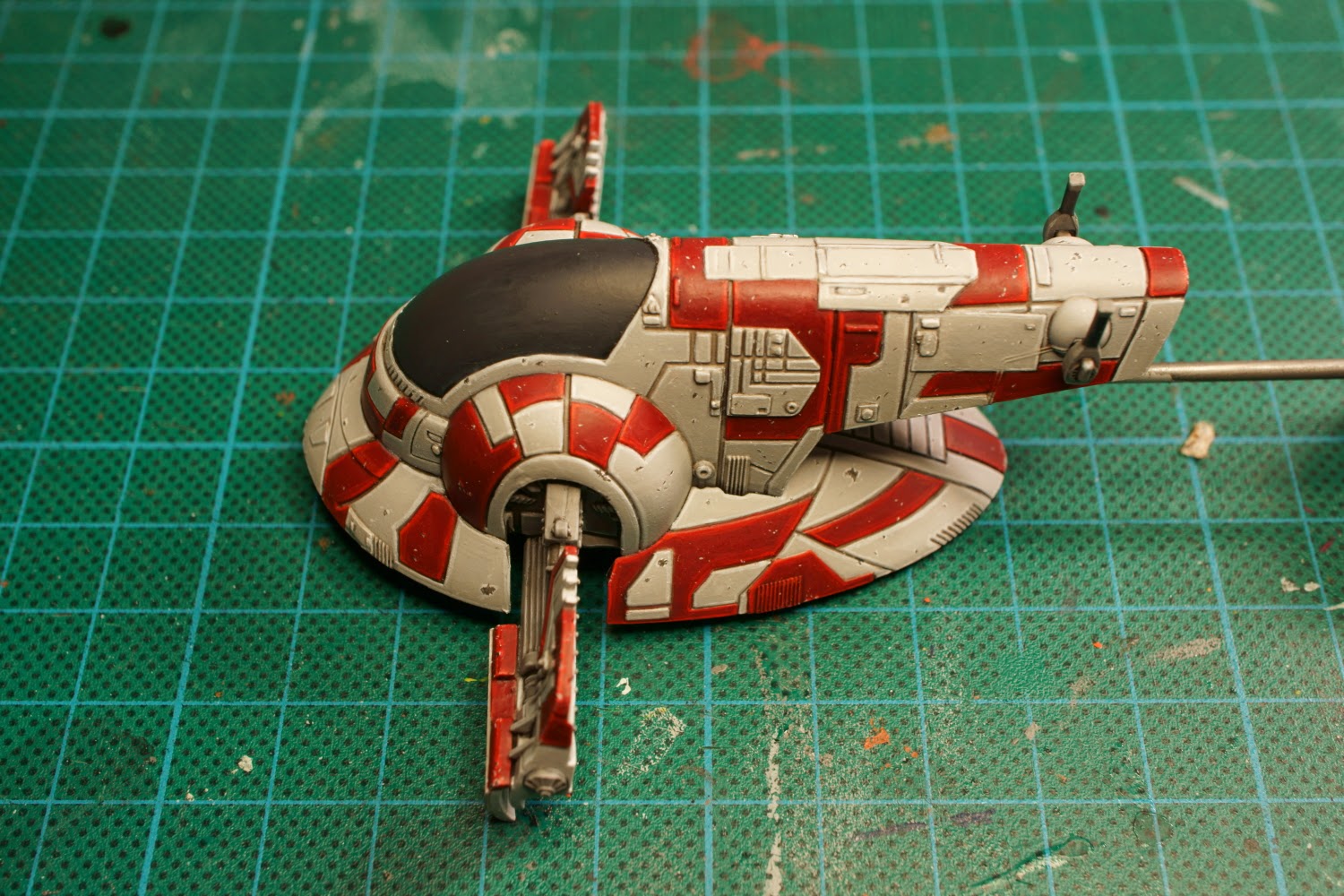 The front was chipped in three steps. First I sponge chipped the red areas with the white/grey basecoat and the white/grey areas with pure white. I probably didn't need to make that distinction as pure white on the red would most likely have looked fine as well, but I like being thorough. Secondly I covered some areas with the base colours where I though I had been too heavy the sponge. I also added an outline of pure Evil Sunz Scarlet on the biggest chips on the red areas. The final step was painting some German Grey into the biggest of the chips (and quite a lot of the smaller ones as well). I wasn't quite happy at this stage so I went back and manually added a good deal of chips on the red areas tough I did forget to take a photo of that. Ironically I didn't intend to do as much chipping as I ended up with, but it looked so damned good that I could hardly contain myself! 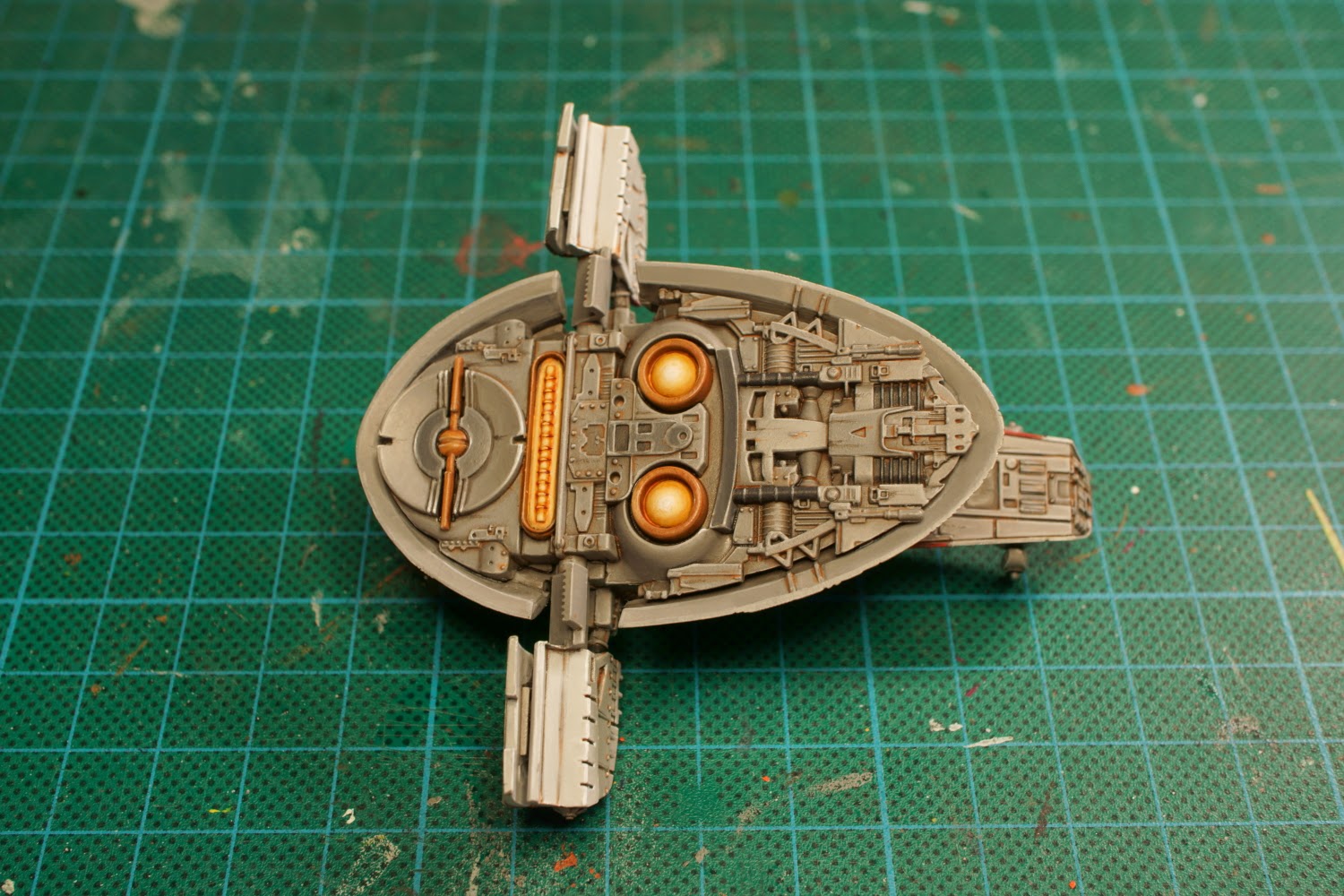 Finally I could add some rust. I painted thinned out Vallejo Parasite Brown in several recesses, concentrating on the panels between white areas as the rust colour wouldn't be as visible close to the red. The back got more rust to simulate the more exposed mechanics and I also added some grime/oil streaks by painting thin lines of Dark Tone Ink. The final thing to add was several thin coats of gloss varnish to the cockpit window after I had varnished the rest of the model with matte varnish. The window actually became so glossy that you can discern some my photo equipment in the studio photos I took!
Upplagd av Macross_VF1 kl. 20:13:00