By now I had all the basic structures built and in place so it was time to start detailing everything. I started with trying to make my asteroid look like an asteroid. 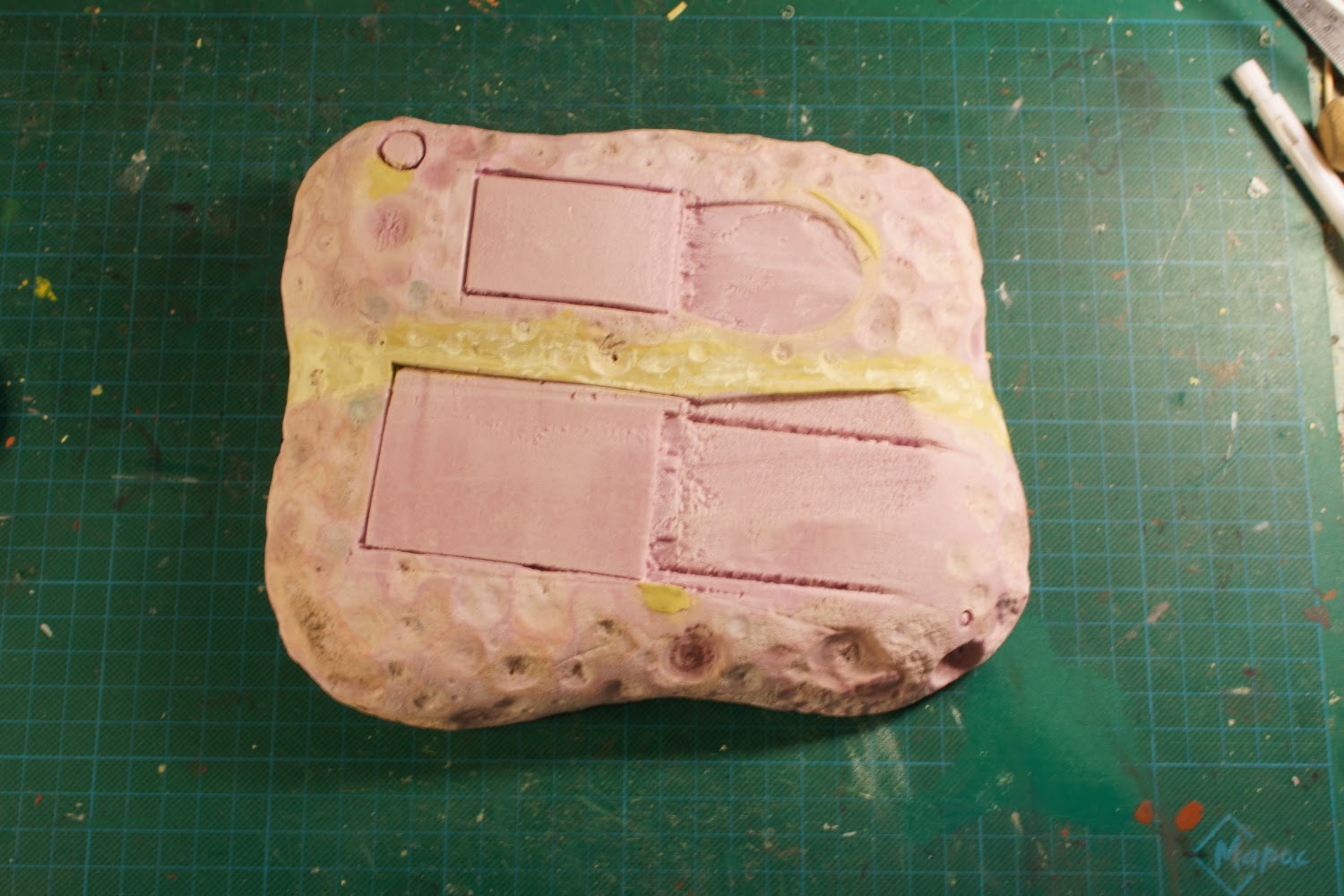 I asked around a bit on how to accomplish this and got a tip that acetone works wonders on styrofoam. Not having ever tried this, I first experimented with some leftover pieces that left me very pleased with the result. Probably slightly woozy from the acetone vapours I immediately set out to deform the asteroid surface to represent hits from smaller asteroids. It was really just as simple as applying varying amounts of acetone to random spots and pressing down to form the indentation. Of course for the areas covered with milliput this didn't work in the slightest so I had to use my trusty Dremel to carve out some decent holes. 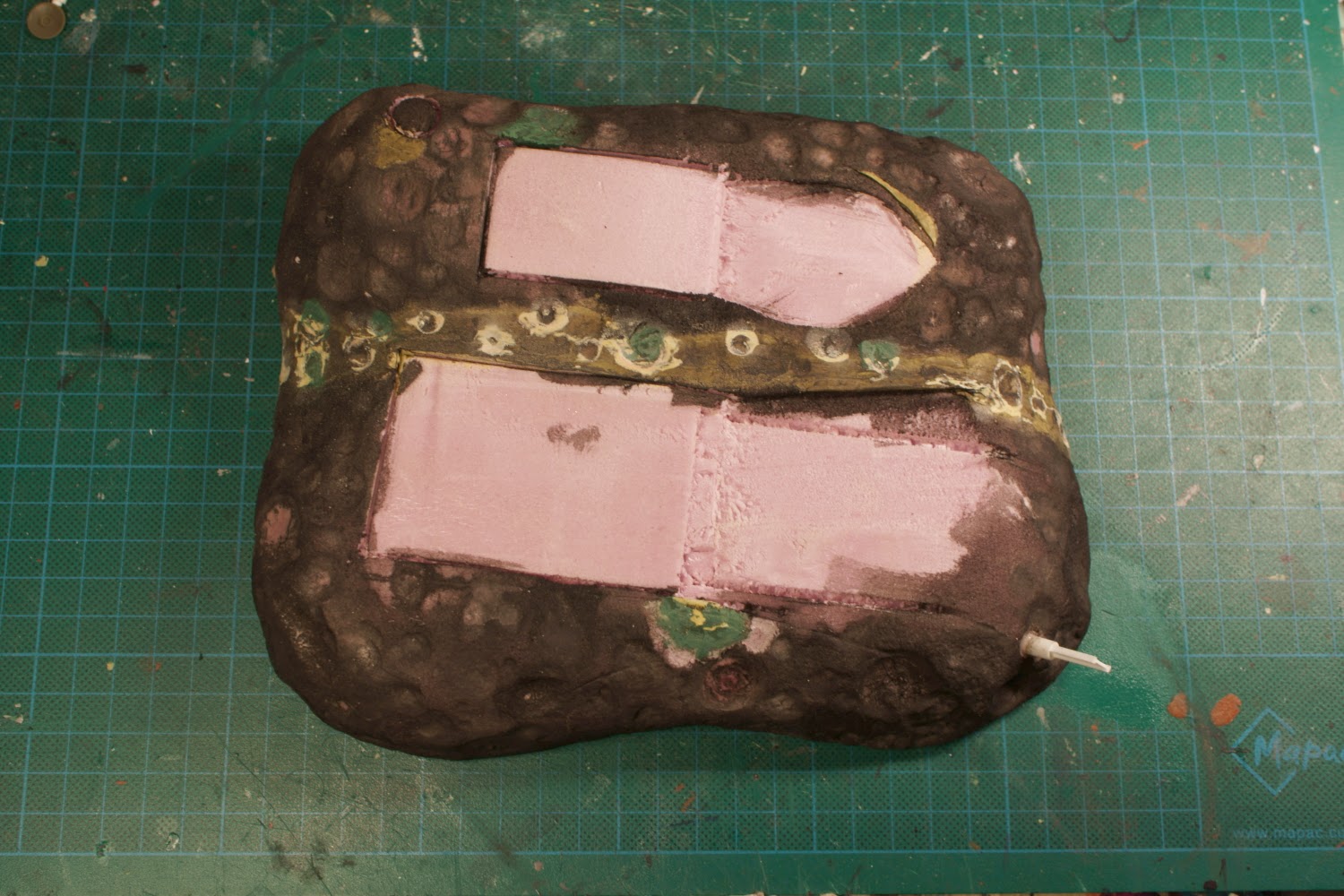 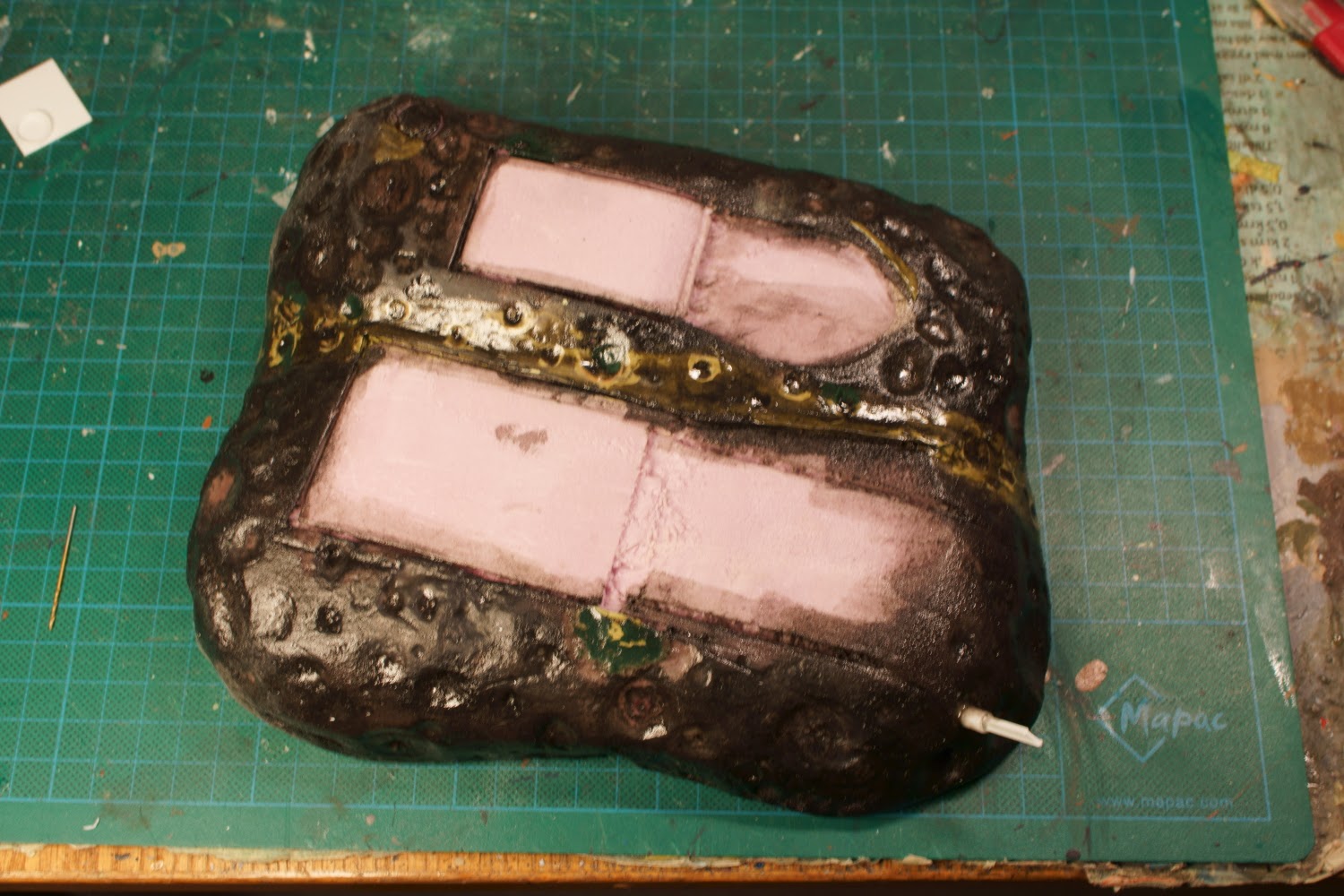 I painted the surface with thinned out black to be able to easier spot any flaws and filled them out with liquid green stuff. When that was dry I covered the 'rock' with several layers of thinned out PVA glue to seal the model. Finally, to make sure the surface had about the same structure all over, I used Vallejo Mat Gel Base. This has a thicker consistency than PVA and is therefore great for shaping patterns on a surface, or in this case, making sure the asteroid had about the same roughness all over. 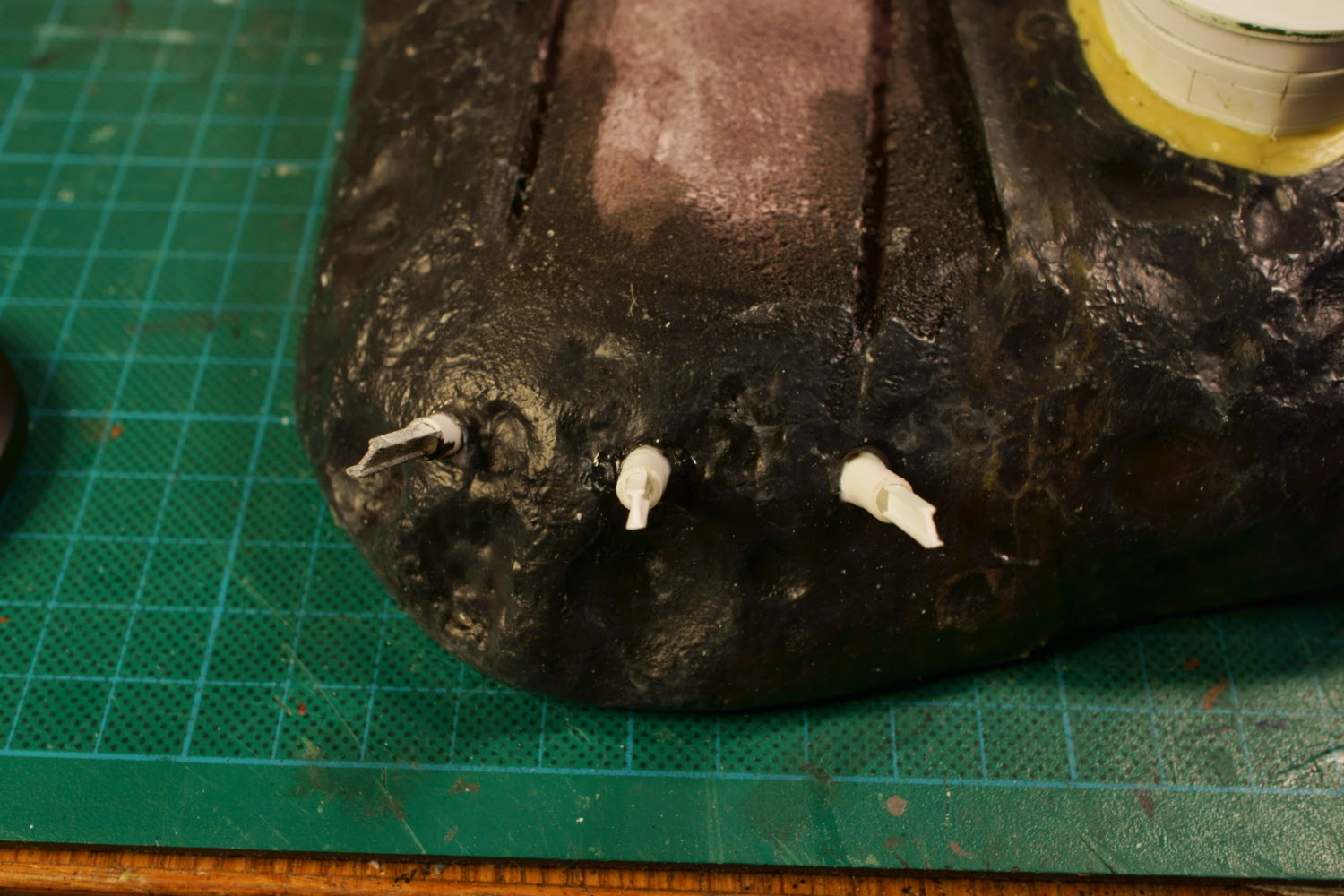 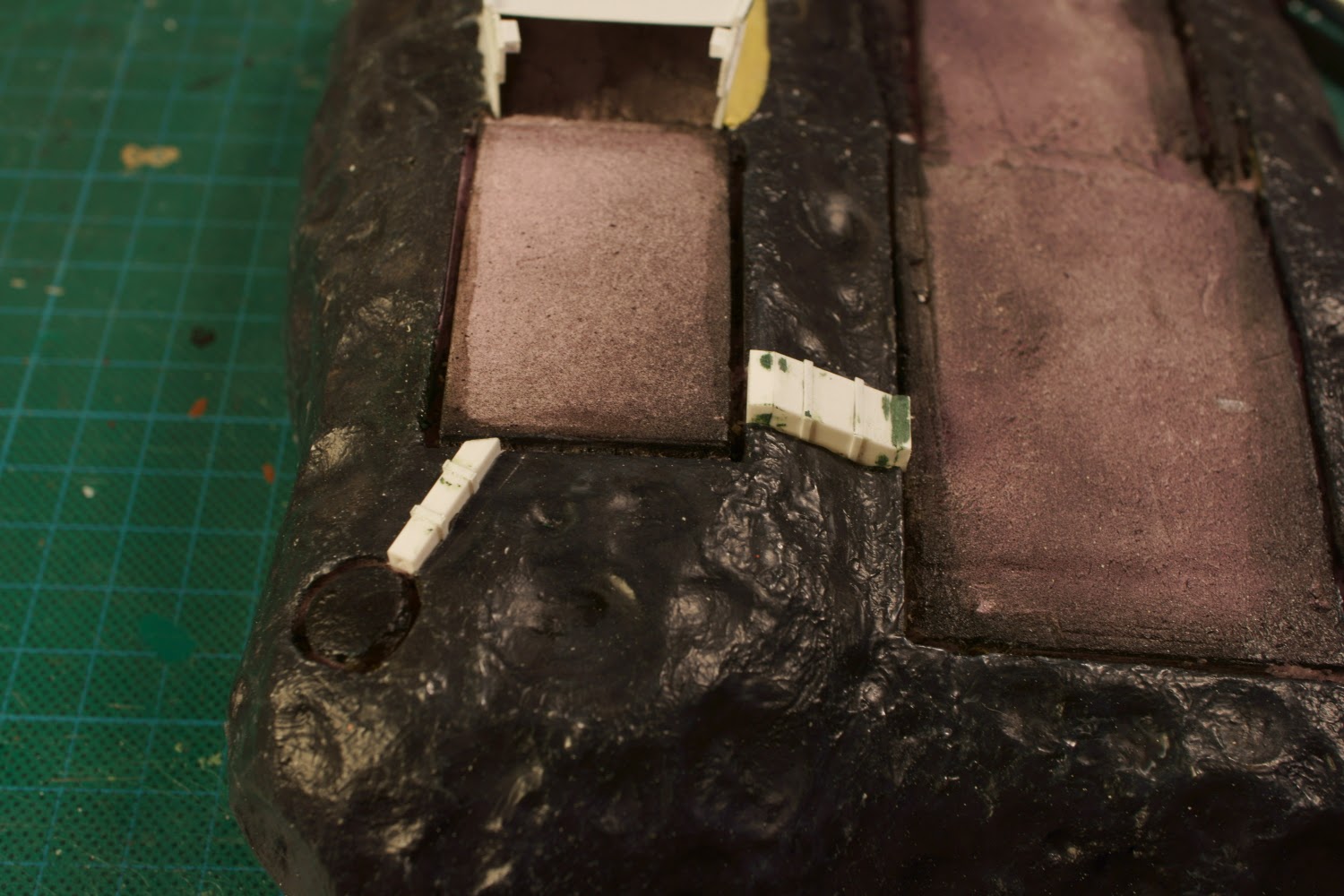 Next I added some support struts to the landing pad (well one was already built, as can be seen in earlier pictures). This was most likely not needed to actually support the landing pad but it looked proper so I figured it was a good idea. I also built two small connecting walkways between the buildings. 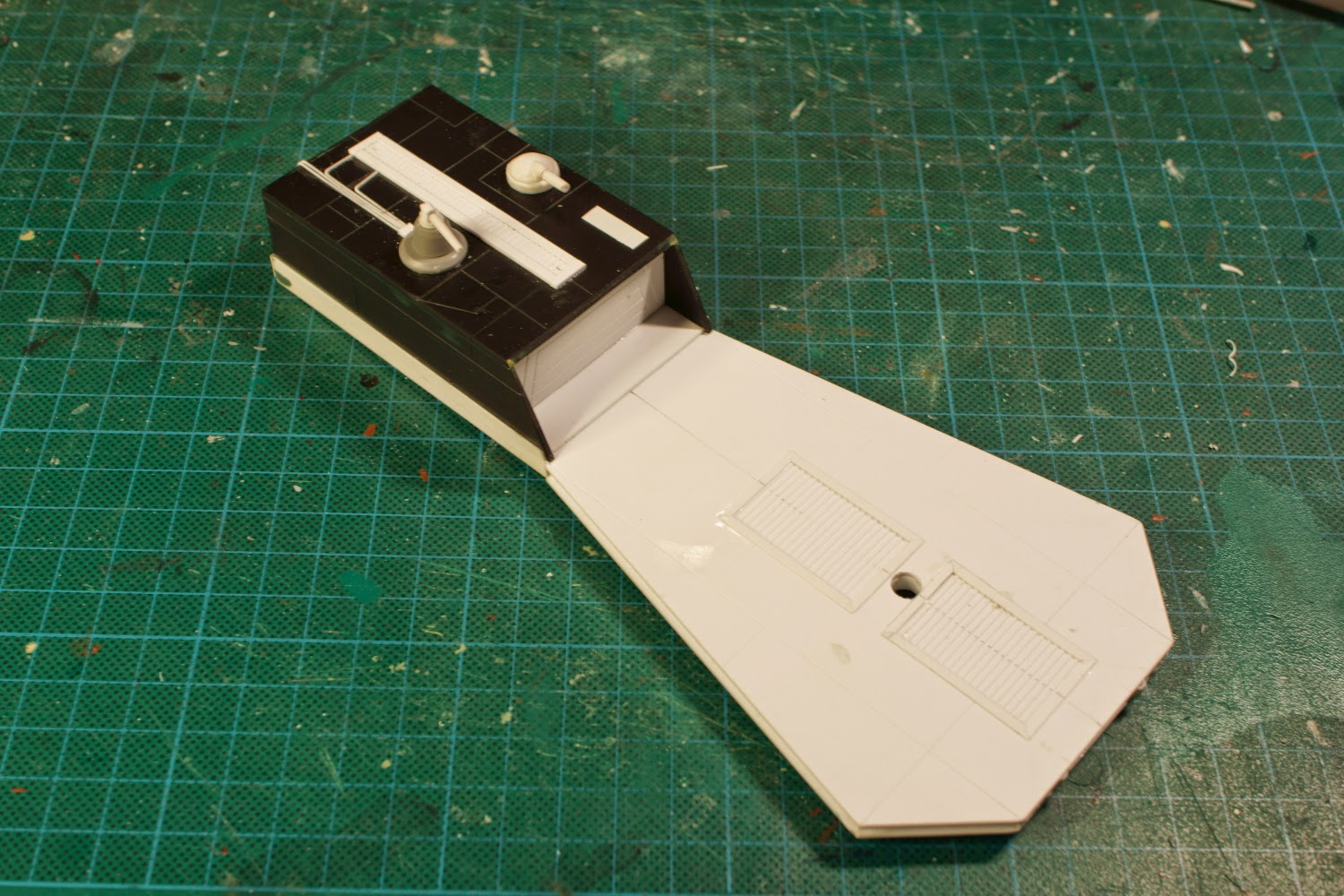 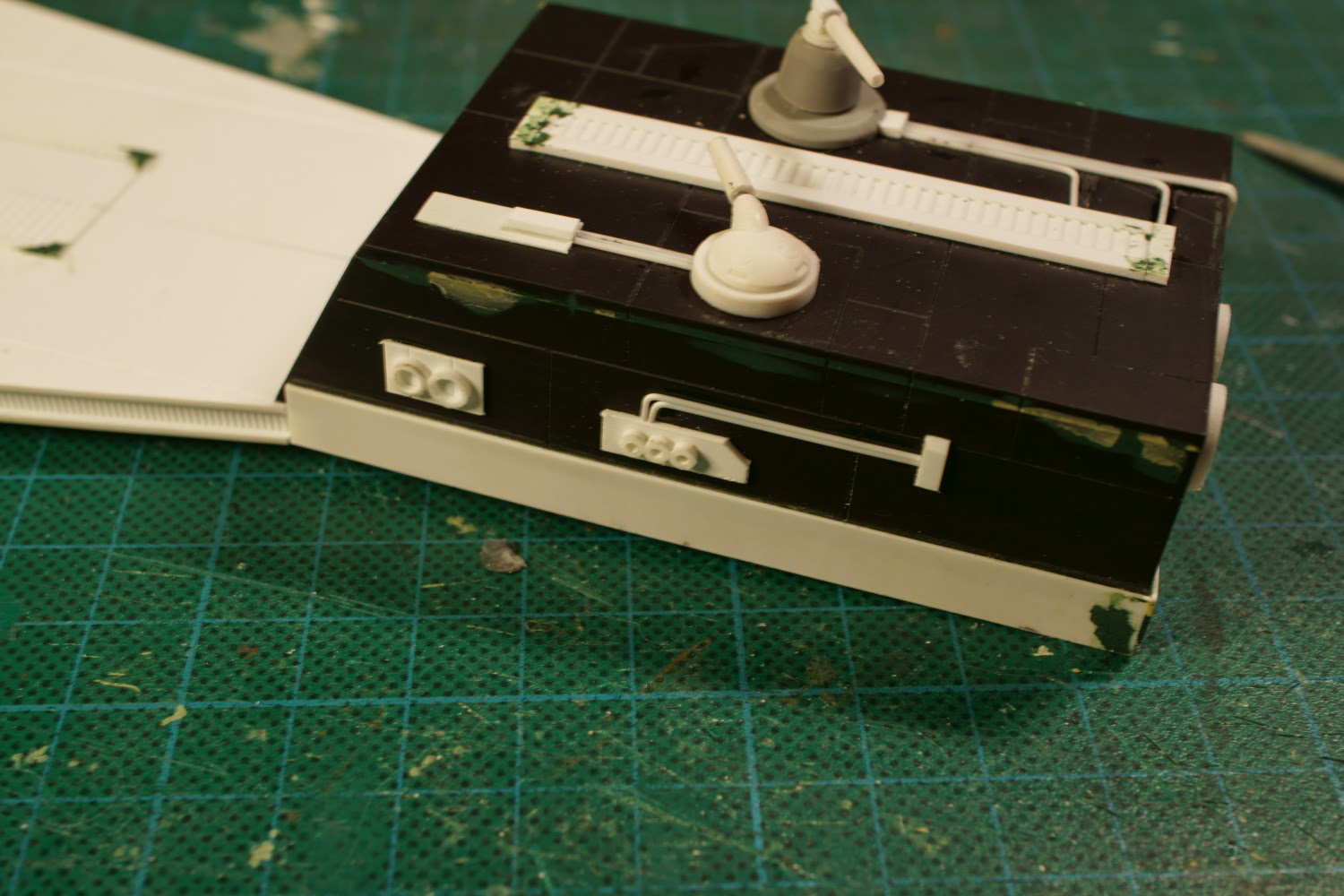 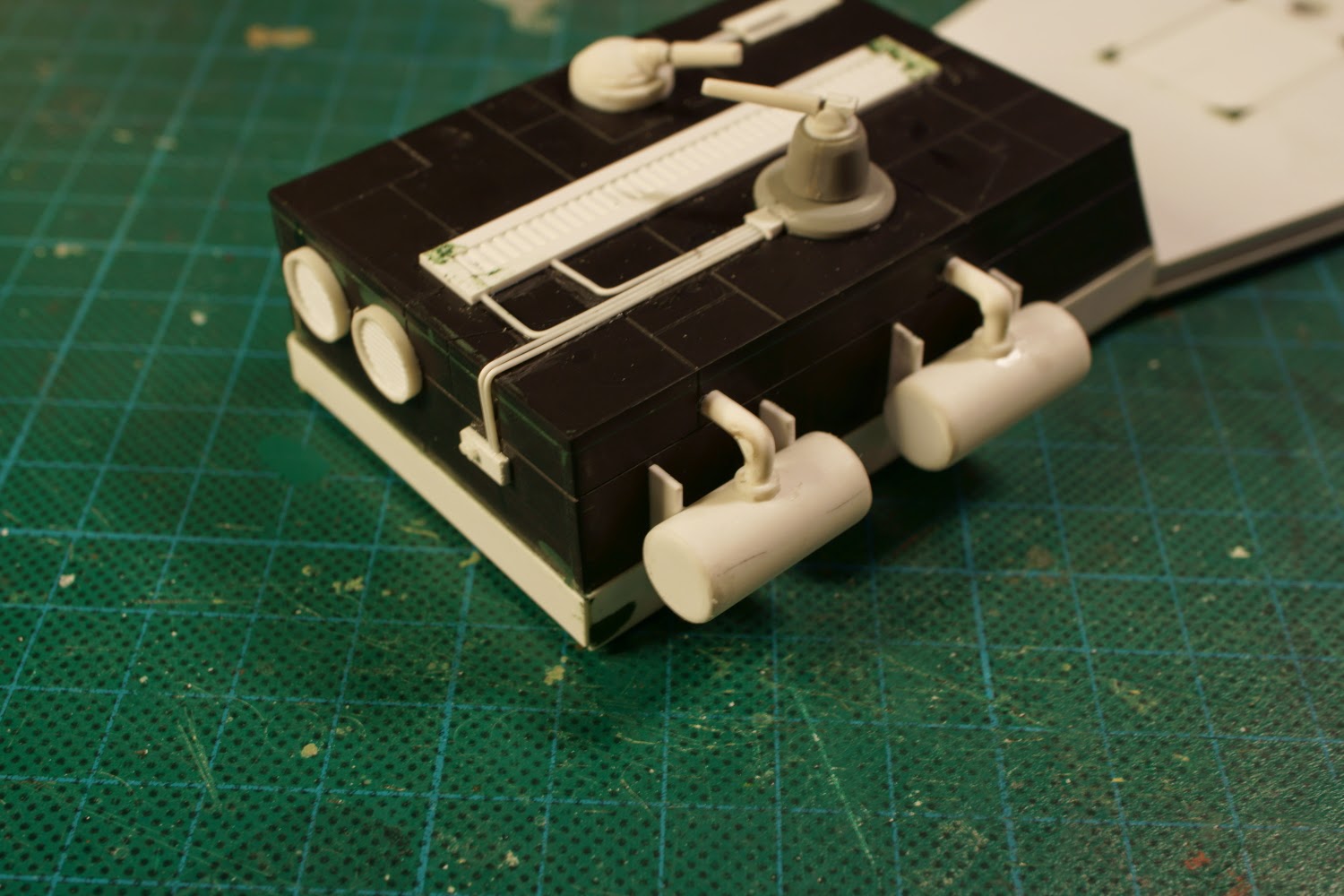 The hangar and landing pad was the first structure to be fully detailed. Throughout the entire build, I deliberately kept the details a bit simpler than I might normally have done. A terrain piece like this usually has to stand up to a fair bit of wear and tear so I built everything fairly solid and simple to be able to take the intended usage.

Keen eyed readers might also spot the hole in the middle of the landing pad. This was added to make X-wing ships be able to land better, without the mounting peg mucking things up. 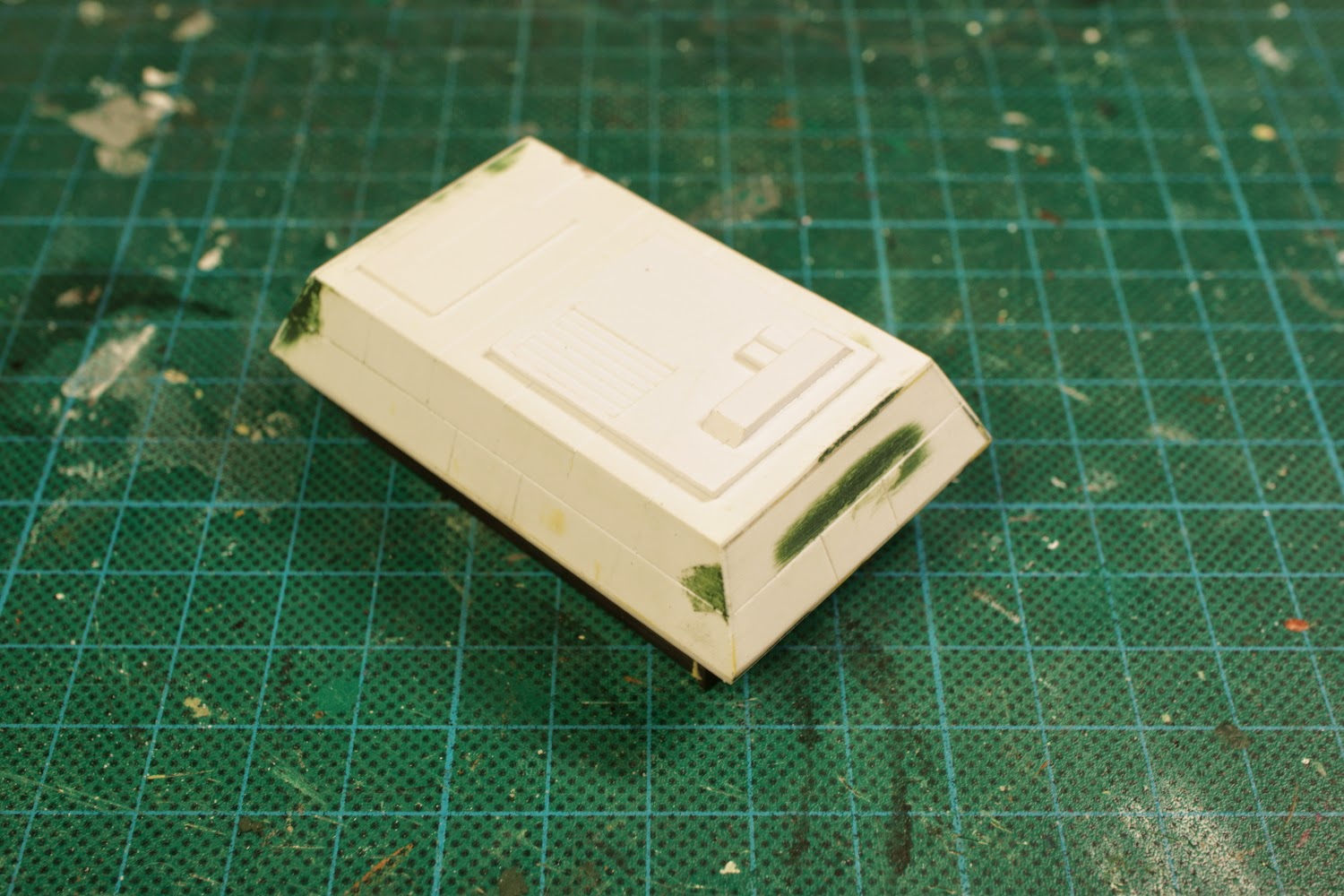 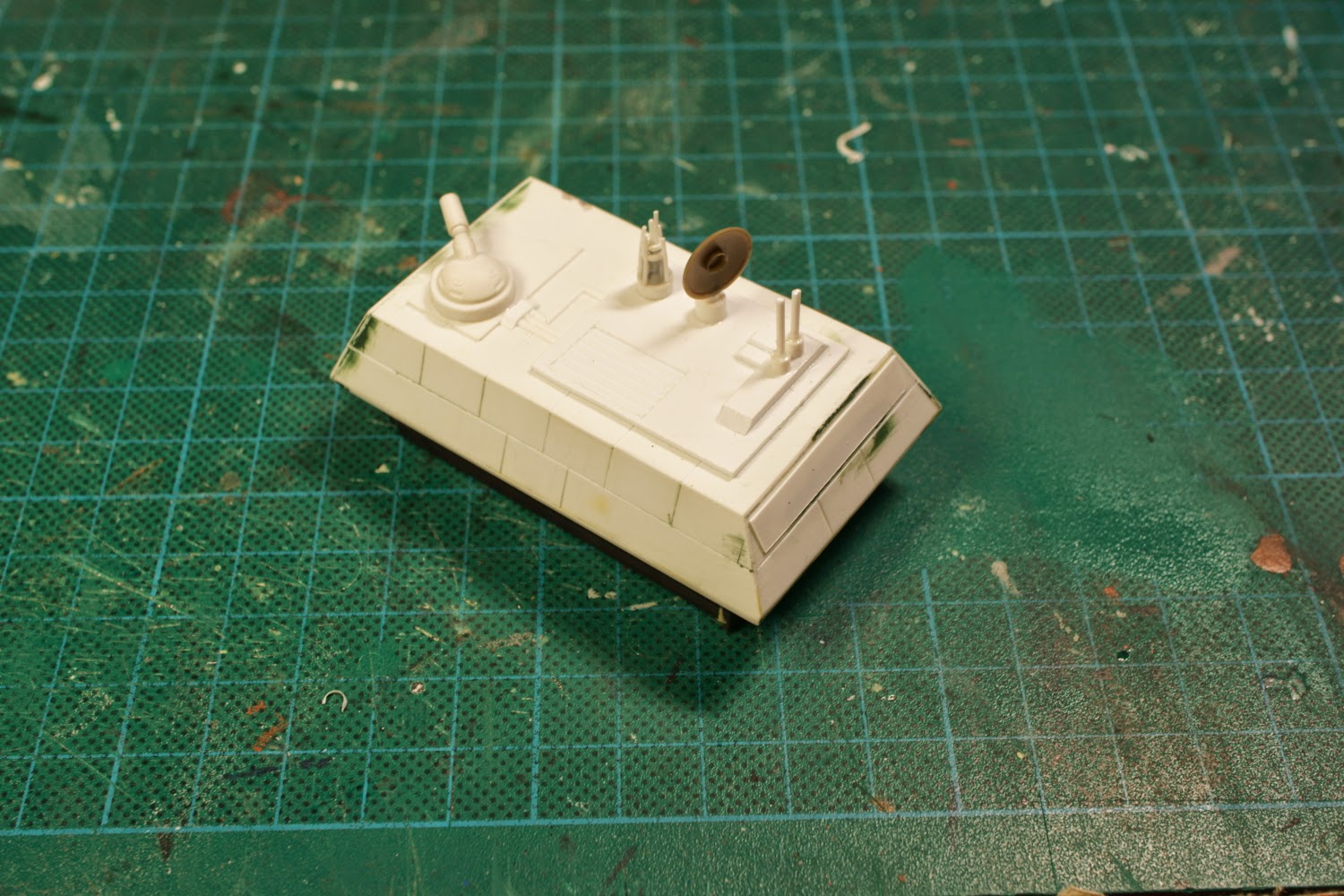 The command bunker is probably the building that most closely emulate the original computer model it is built after. As such I knew I had to add some communication equipment on top of it. The antenna behind the satellite dish is intended to look like the comm satellites that can be found as scenario markers in the X-wing starter box. This was something the commissioner wanted to be added and I wish I could have built it larger but sadly I just didn't have any good parts for this. 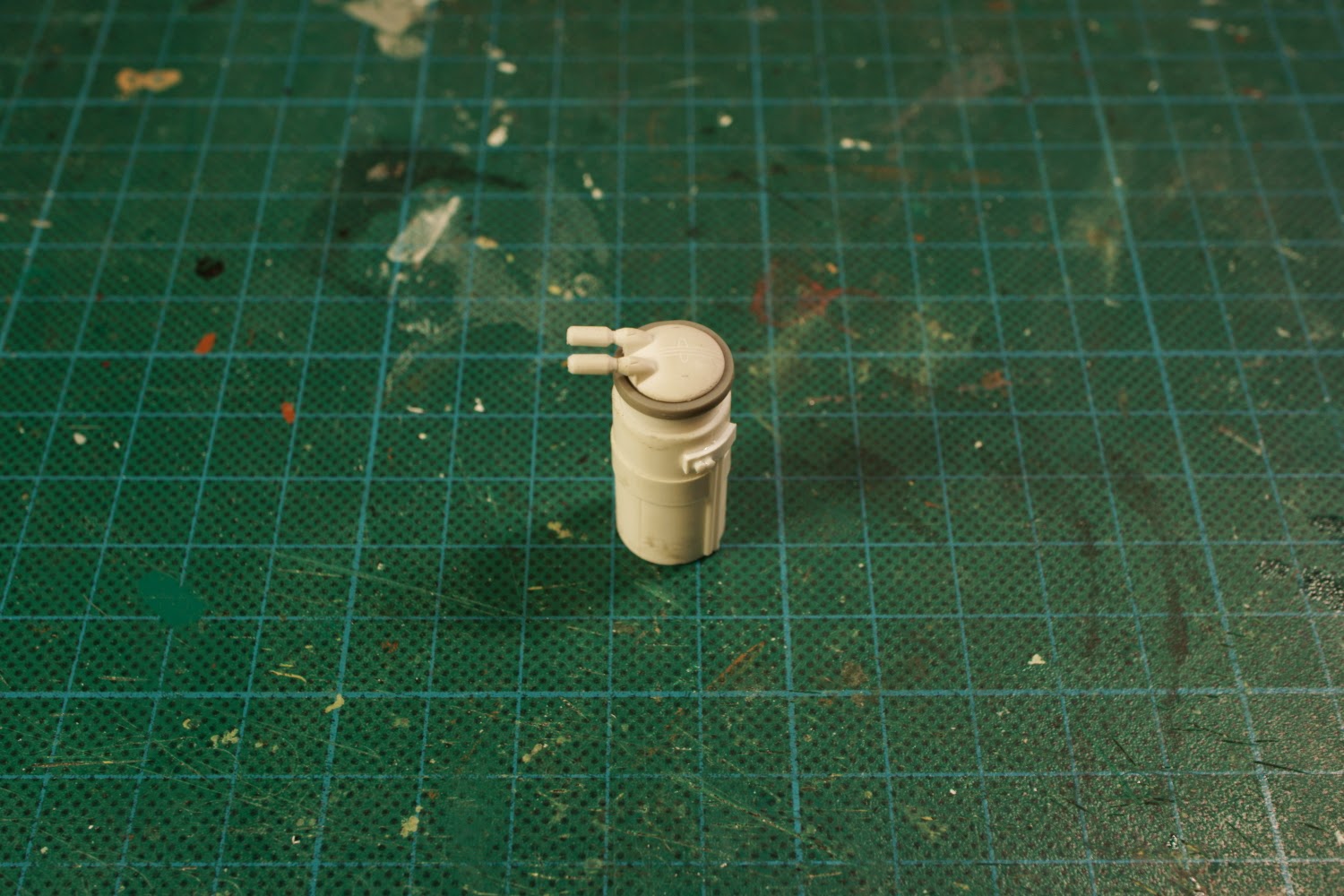 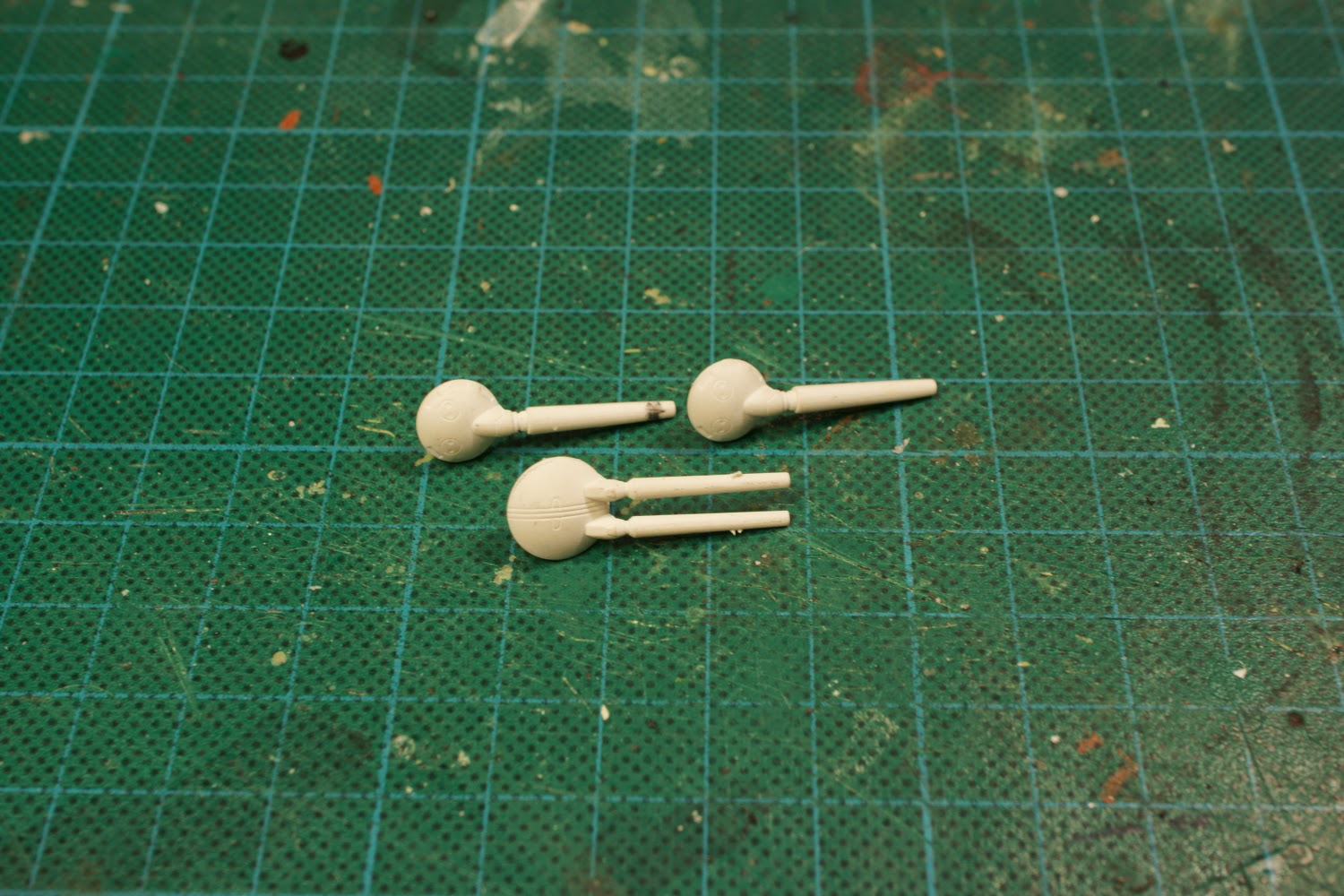 The turret tower was last on the list to be detailed. Nothing fancy really, as the main point of it was to have a big freaking gun on top. The base has a total of four turrets, all of which can be turned 360 degrees. Probably a bit too much but it looks so good! One of the turrets is magnetised and is intended to look a bit like the small turrets found on the CR-90 corvette. However, the other three are leftover parts from a Hasegawa Macross plastic kit. Never throw away anything! 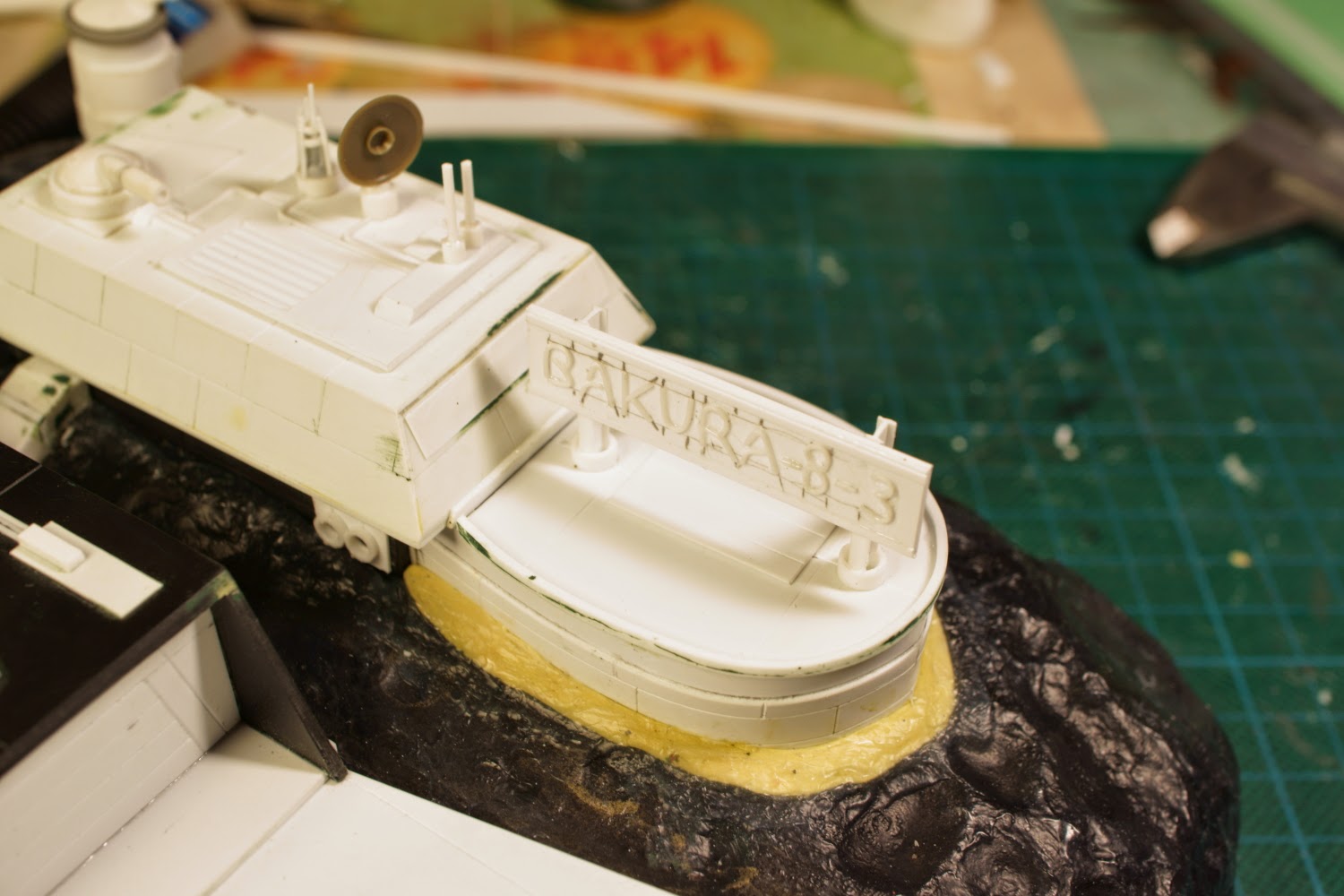 The cantina was already almost completely detailed from when I originally built it. However, the commissioner wanted a sign on top of it with the text BAKURA-8-3 so I happily obliged. Those letters were damned fiddly to shape properly though, so I wasn't quite as happy when it was finished. Now I could finally begin painting the asteroid base but that is a story for my next post. Later peeps!