Busy, busy, busy. It feels like I barely have time to post anything nowadays. Anyway here's how I painted my version of N'dru Suhlak's Z-95. 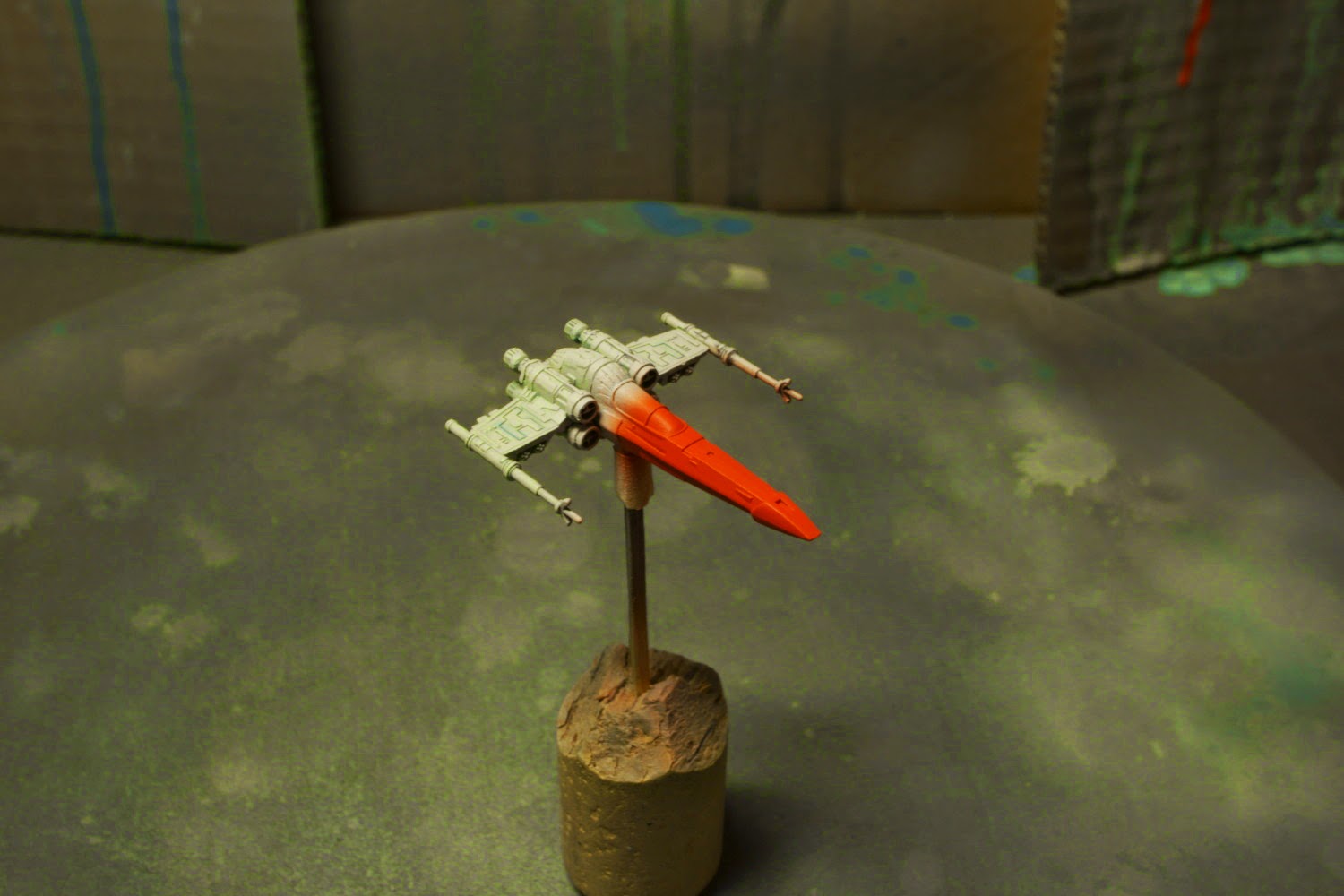 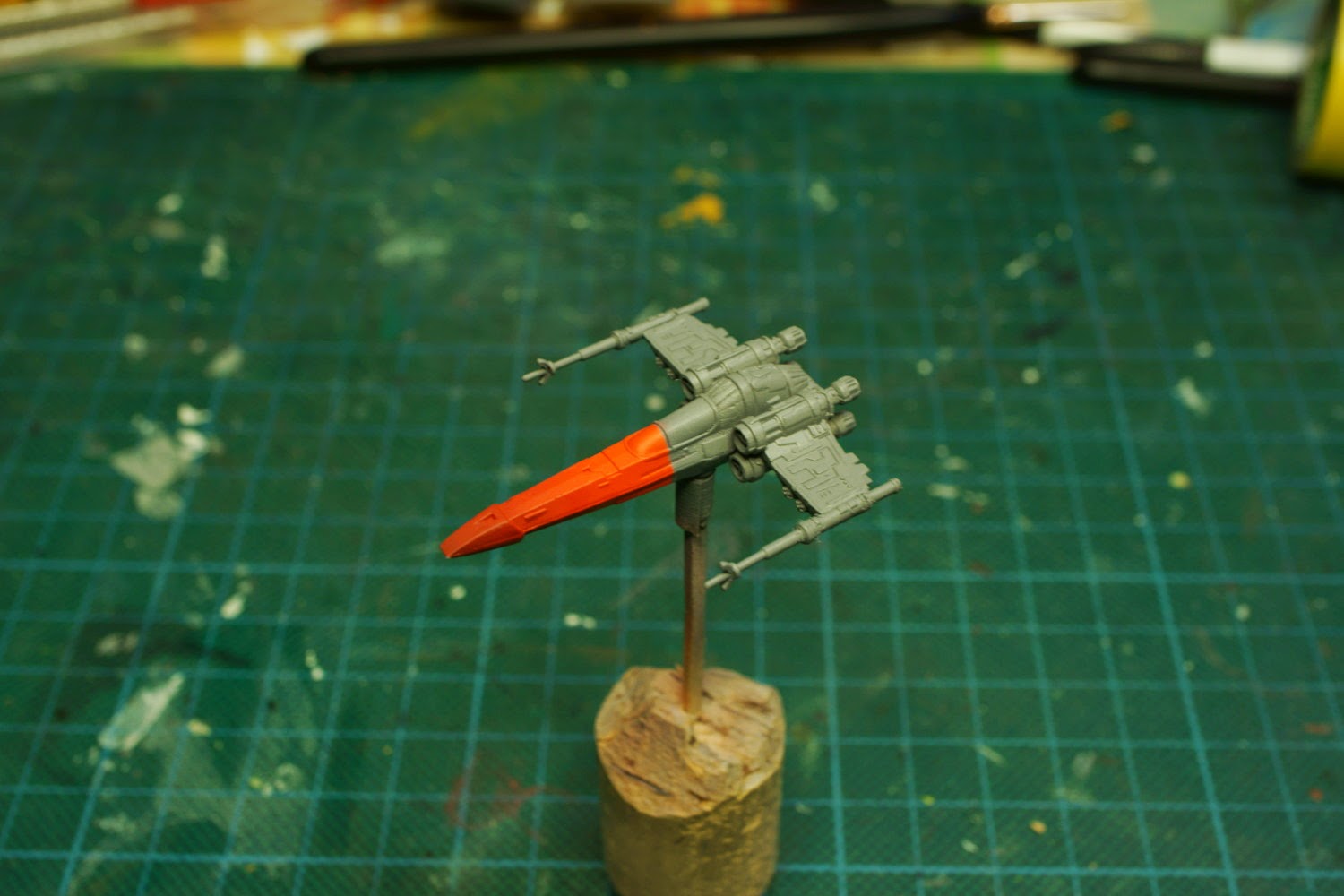 Directly after priming the ship I airbrushed the nose with some VGC Bloody Red. Next I masked the front and sprayed the back of the ship with a 1:3 mix of VMC German Grey and VGC Cold Grey. Finally, I reversed the masking and concentrated on achieving the distinctive transition from bright red to dark red that makes N'dru's ship stand out from the crowd.

I first mixed a 2:1 mix of Bloody Red and VGC Scarlett Red and painted most of the red area. Next I reversed the mix and sprayed about half the red area. When I reached the nose I carefully sprayed pure Scarlett red quickly followed by Scarlett Red mixed with a little black for the absolute tip of the nose. While I have owned an airbrush for quite some time now, I've actually done very little of this kind airbrushing so it was fun to finally have proper go at it. 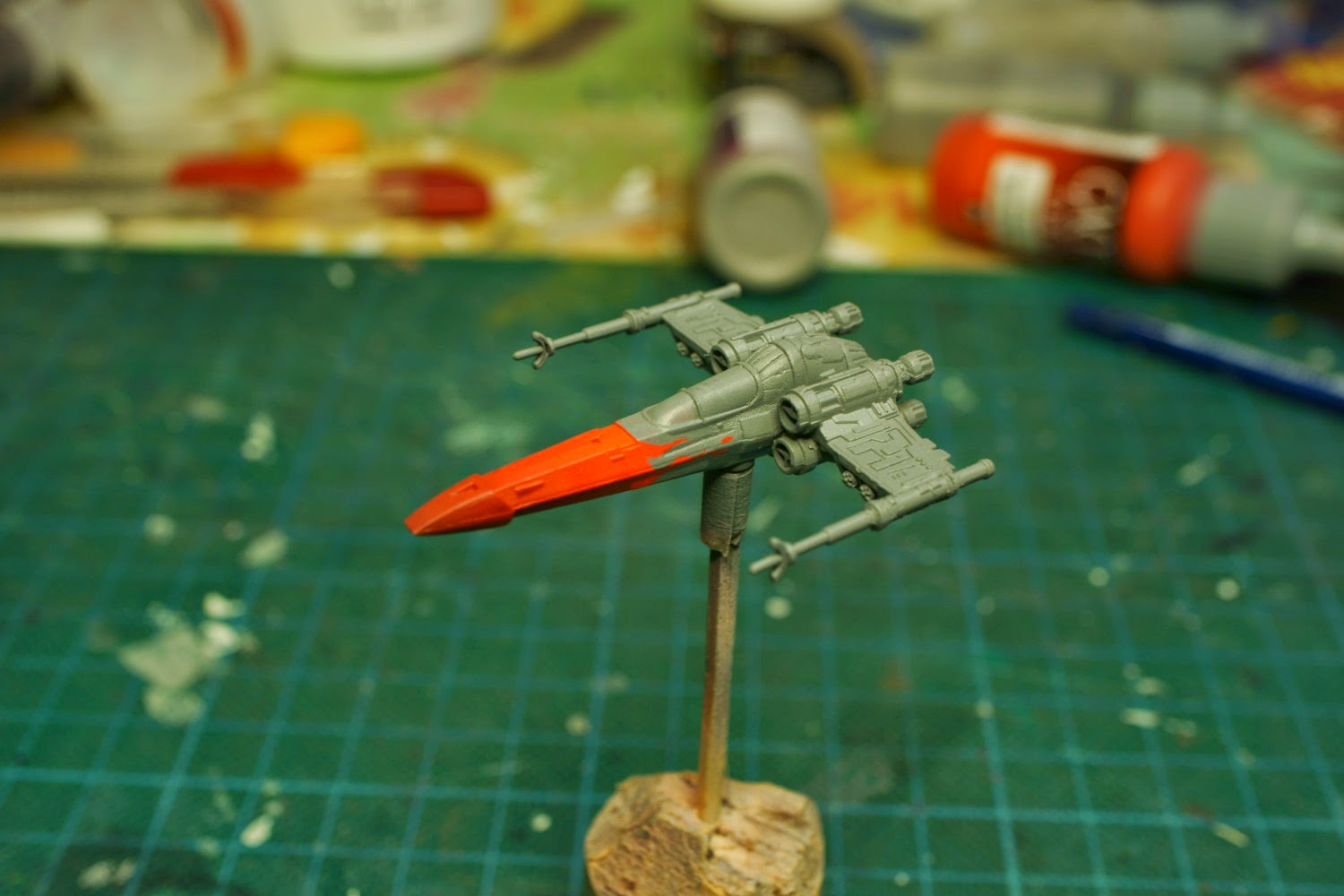 When the airbrushing was done I cleaned up and 'painted' most of the flames with the basecolour. This was basically a case of repainting part of the ship and leaving a flame pattern behind, though I did add some extra details with Bloody Red. 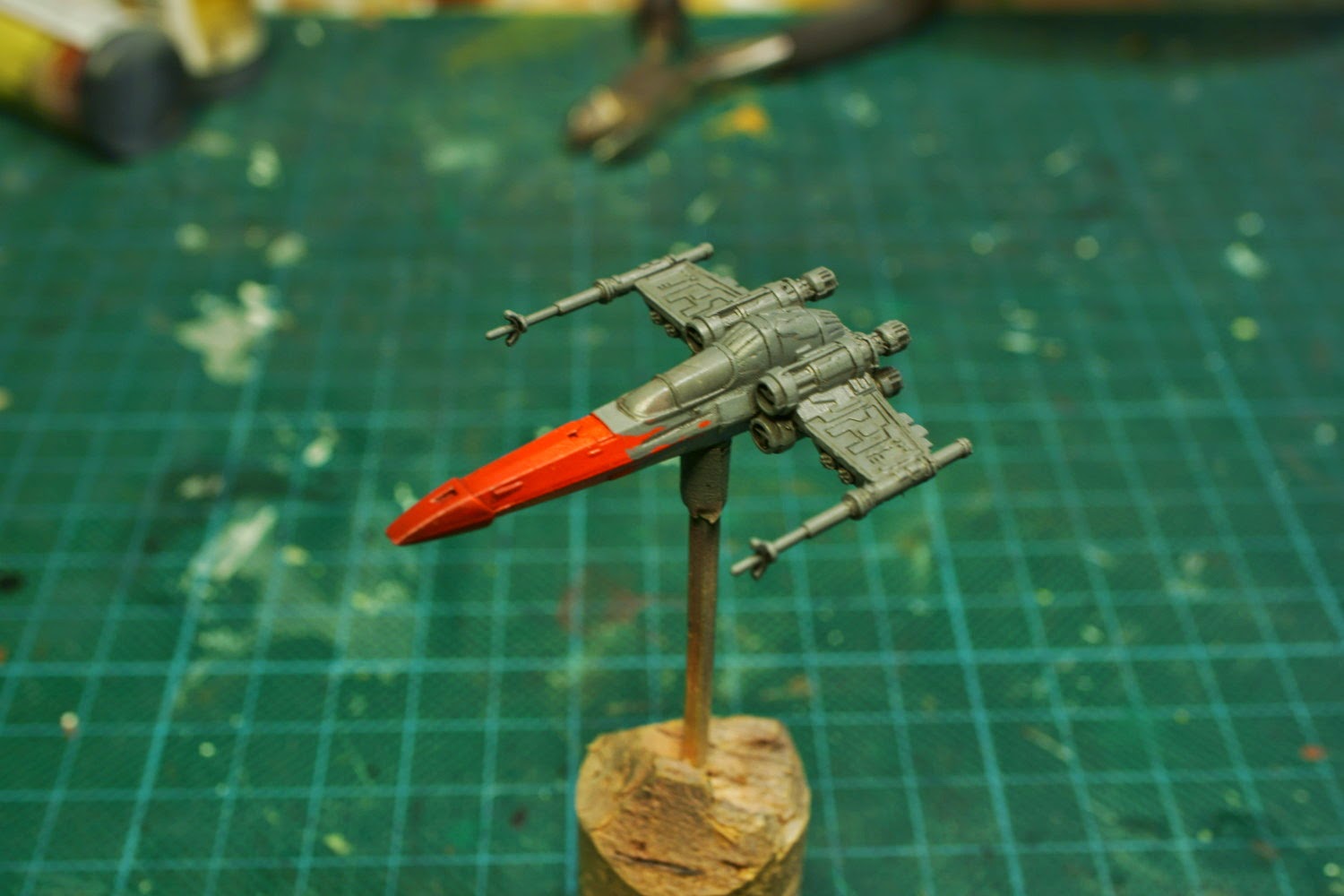 Before shading the model I sprayed it with a layer of gloss varnish. This is something I've previously often done using satin varnish in a spray can to seal the model and make it easier apply the wash. However, I discovered with Kabuki Firespray just how much of a difference gloss varnish makes so that is my standard method nowadays.

Anyway, the grey part of the ship was shaded with a thin wash using Army Painter Dark Tone ink. The front was shaded with the same colour but instead of washing the entire area I instead carefully painted the colour into every nook and cranny. 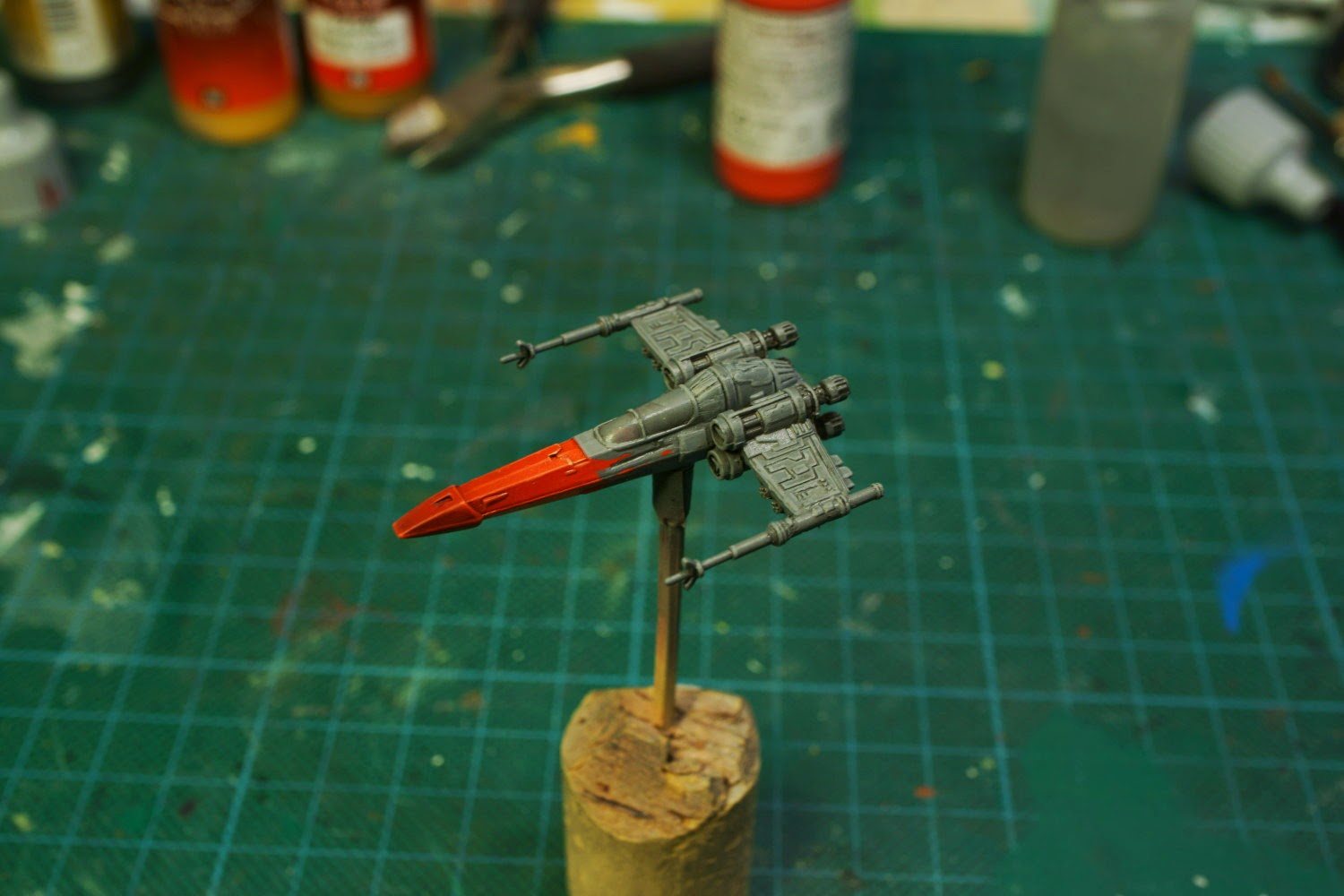 The first grey highlight was a 4:1 mix of Cold Grey and VGC Stonewall Grey. The red on the other hand I highlighted in one go. To keep the colour transition I basically used the earlier mixes but used the previous brighter step. So the tip of the nose (Scarlett Red with a little black) was mostly highlighted with pure Scarlett Red while the area painted with Scarlett Red was highlighted using the 1:2 mix of Bloody Red and VGC Scarlett Red, and so forth. For the pure red I mixed in some VGC Hot orange. 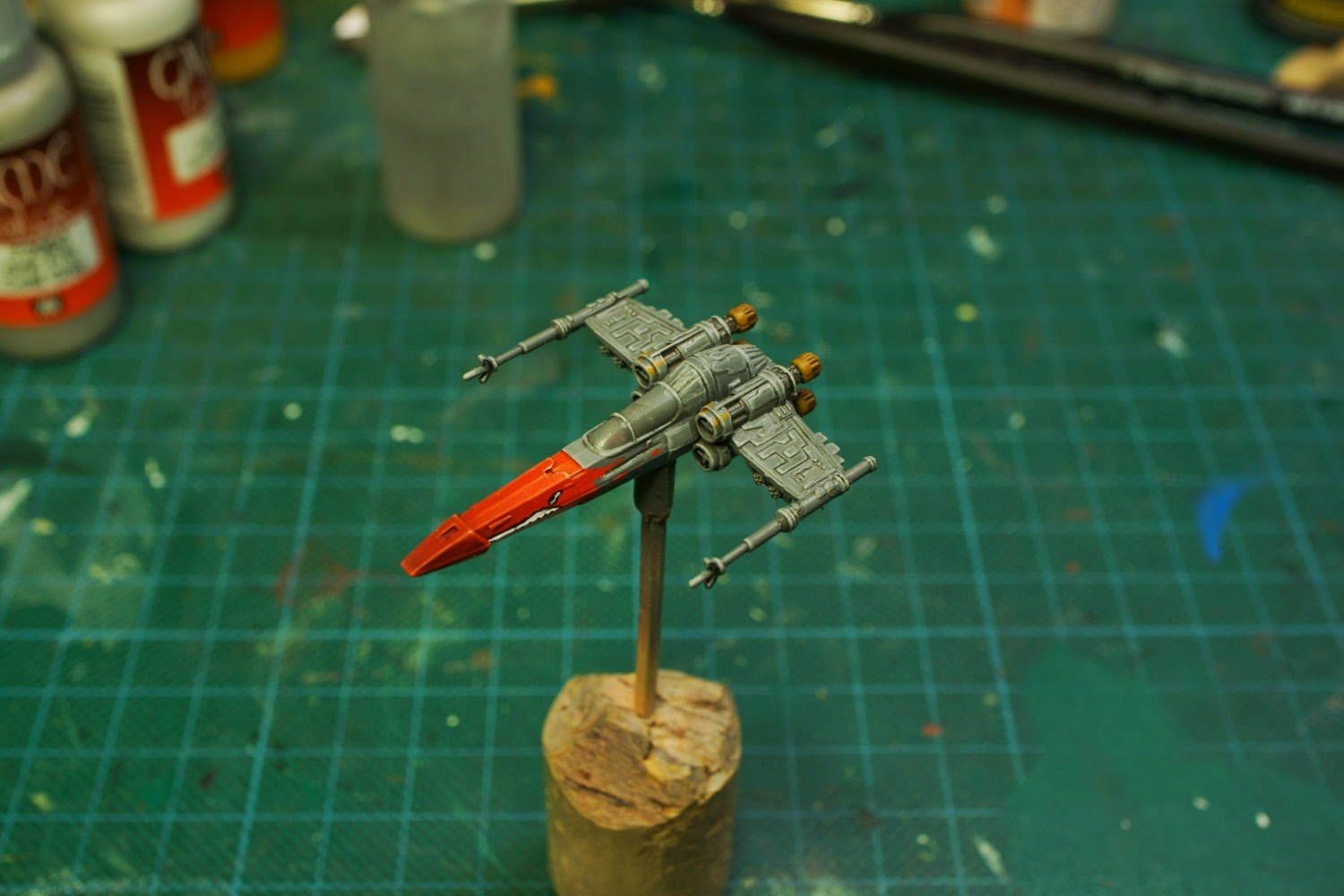 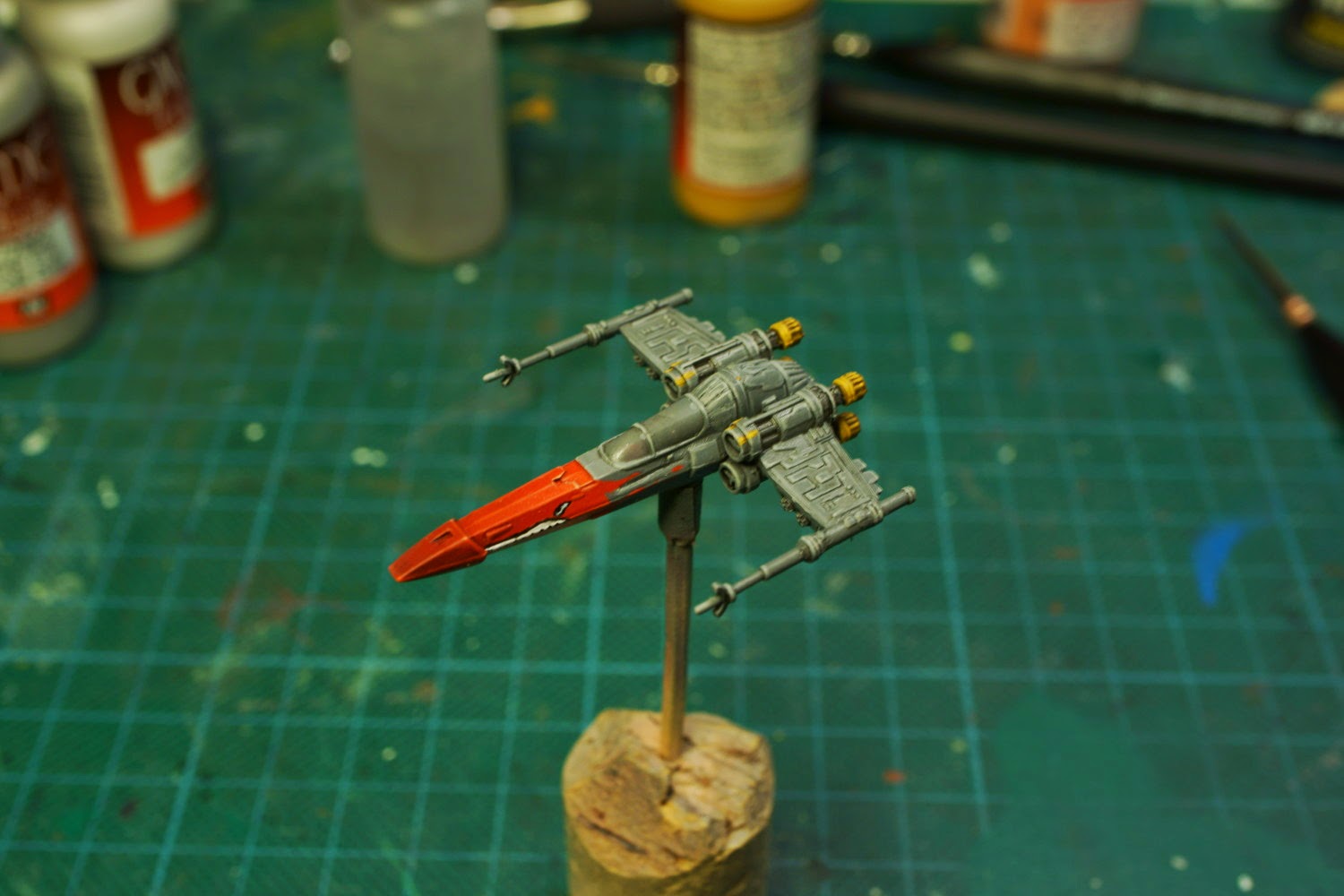 For the second grey highlight I used the same colours as earlier but with a 1:2 ratio instead. The characteristic shark mouth was added by first painting the area VGC Dead White. To bring out the teeth and eyes I carefully repainted most of the area with some black colour. This might seem liek a strange way to paint, but when it comes to pure white and black, it is often easier. 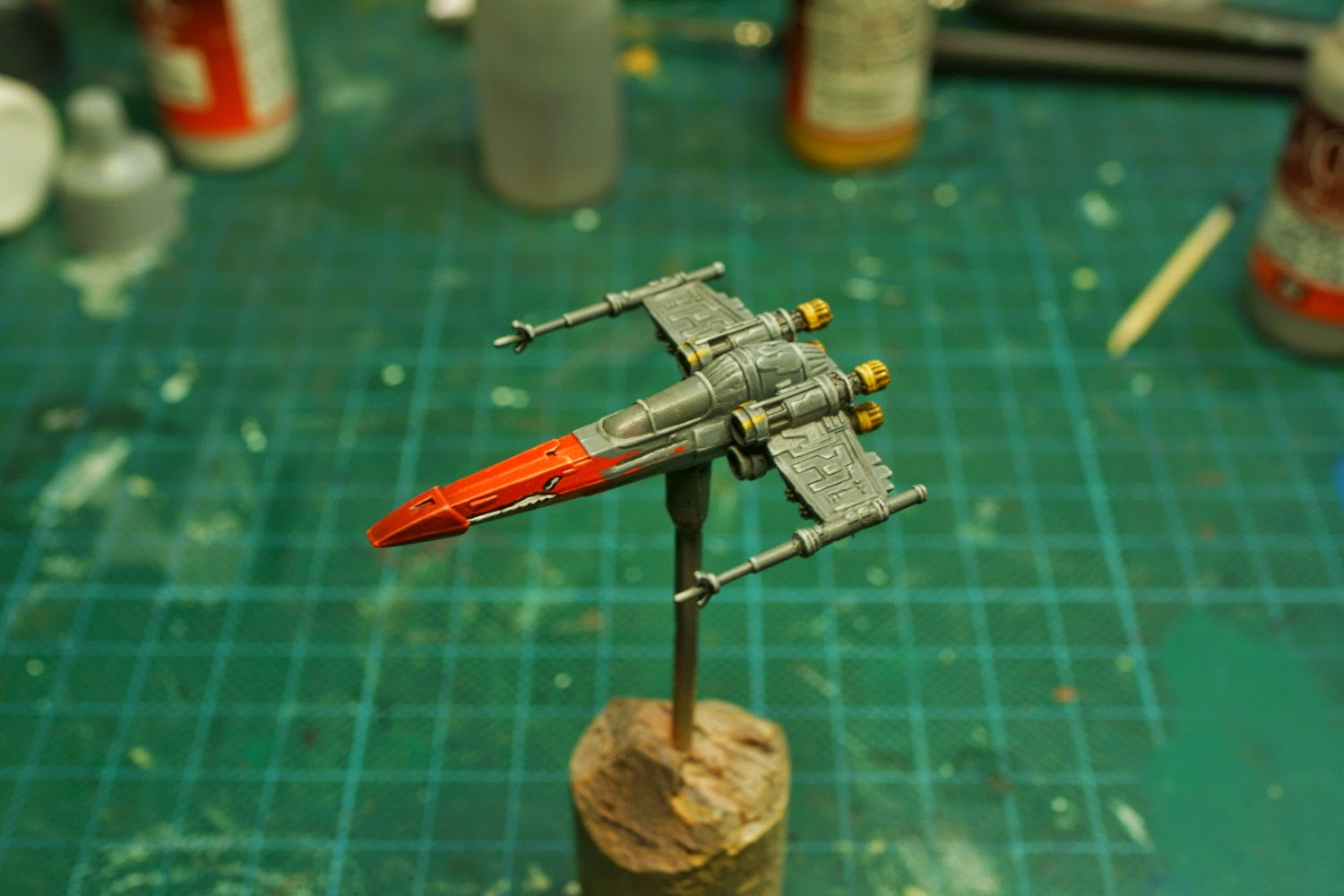 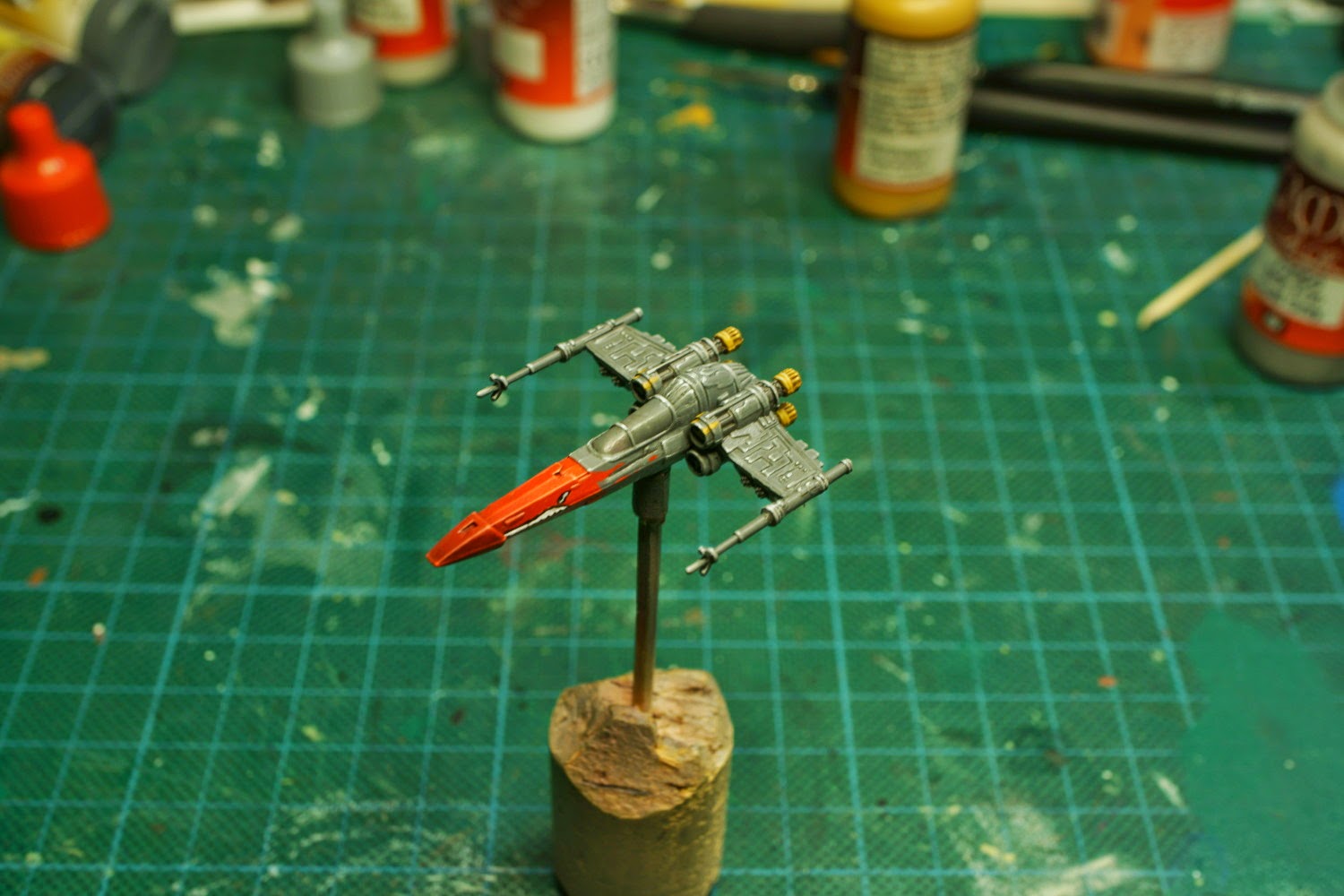 I painted the third grey highlight using a 1:4 mix of Dead White and Stonewall Grey while the fourth and final highlight used a 1:1 mix of the same colours. 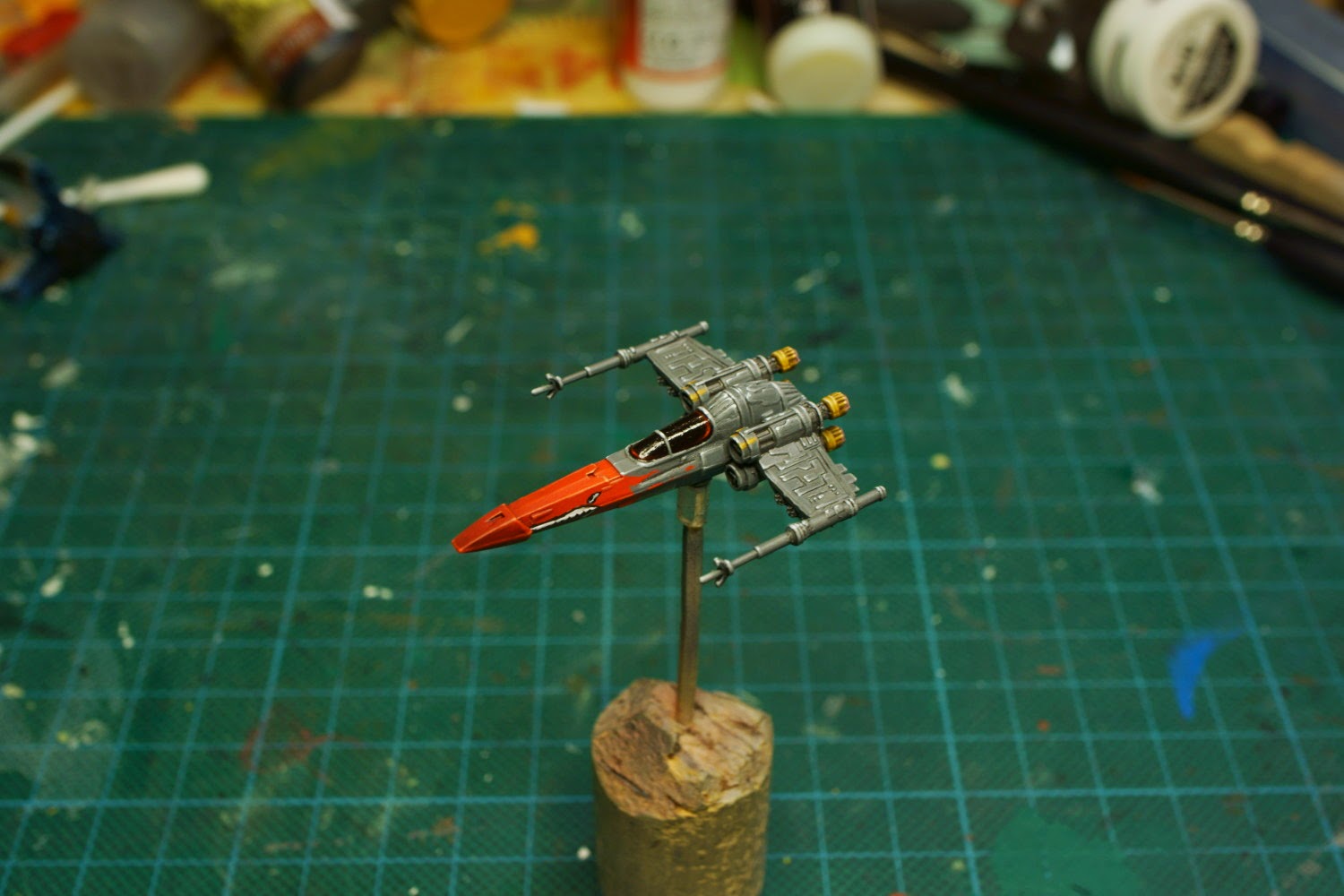 The final touches were the cockpit window and some glow for the engines. Since the ship was already fairly red I tried a pink engine glow. This ultimately didn't look quite right, but I didn't bother repainting it. The window on the other hand was painted with German Grey with a bit of Scarlett mixed in. For the reflection I mixed in more and more red until I was satisfied.
Upplagd av Macross_VF1 kl. 22:44:00