It took a few weeks but here's how I painted the Kabuki Firespray. Before I even started painting the model I had to figure out how to get the motif onto the model. Freehand painting seemed too complex so instead I turned to my old friend water slide decals. Of course, that came with its own set of problems, so I had to spend a considerable amount of time modifying the original picture into something usable. All that time screwing around in photoshop has finally paid off. 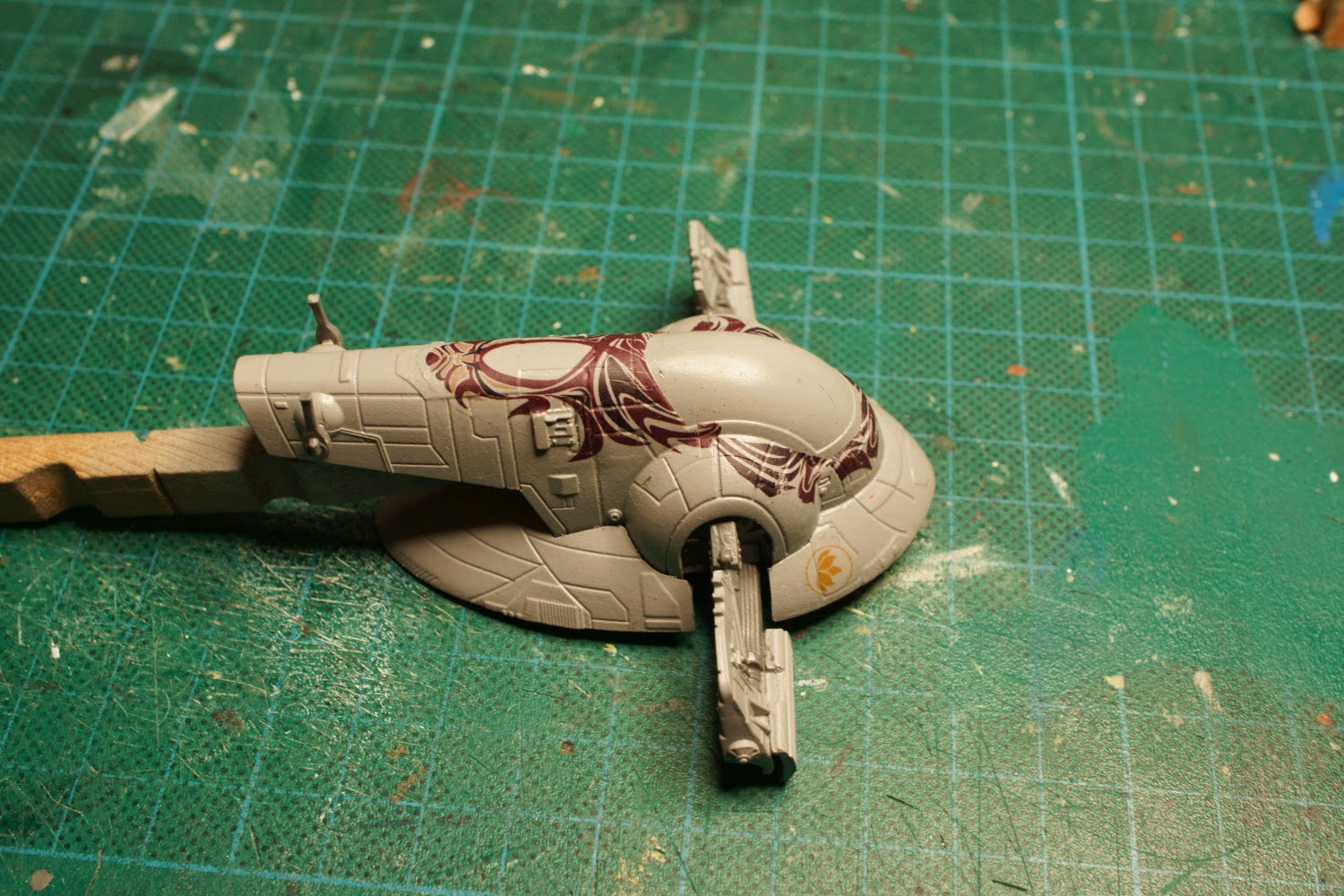 After priming the model I went with a basecoat of Vallejo Game Colour Air Stonewall Grey. Now one would think that this colour would be the same as the non-airbrush version, but as it turns out, the hue is slightly different. Not by much but enough that I couldn't use them interchangeably.

Anyway, to make it easier for the decal to slide into place I sprayed a coat of gloss varnish onto the model. Of course, the model isn't terribly flat so a large decal would be more or less impossible to get right. Instead I chopped up the decal in several small pieces, particularly around the cockpit, and put them in place separately. 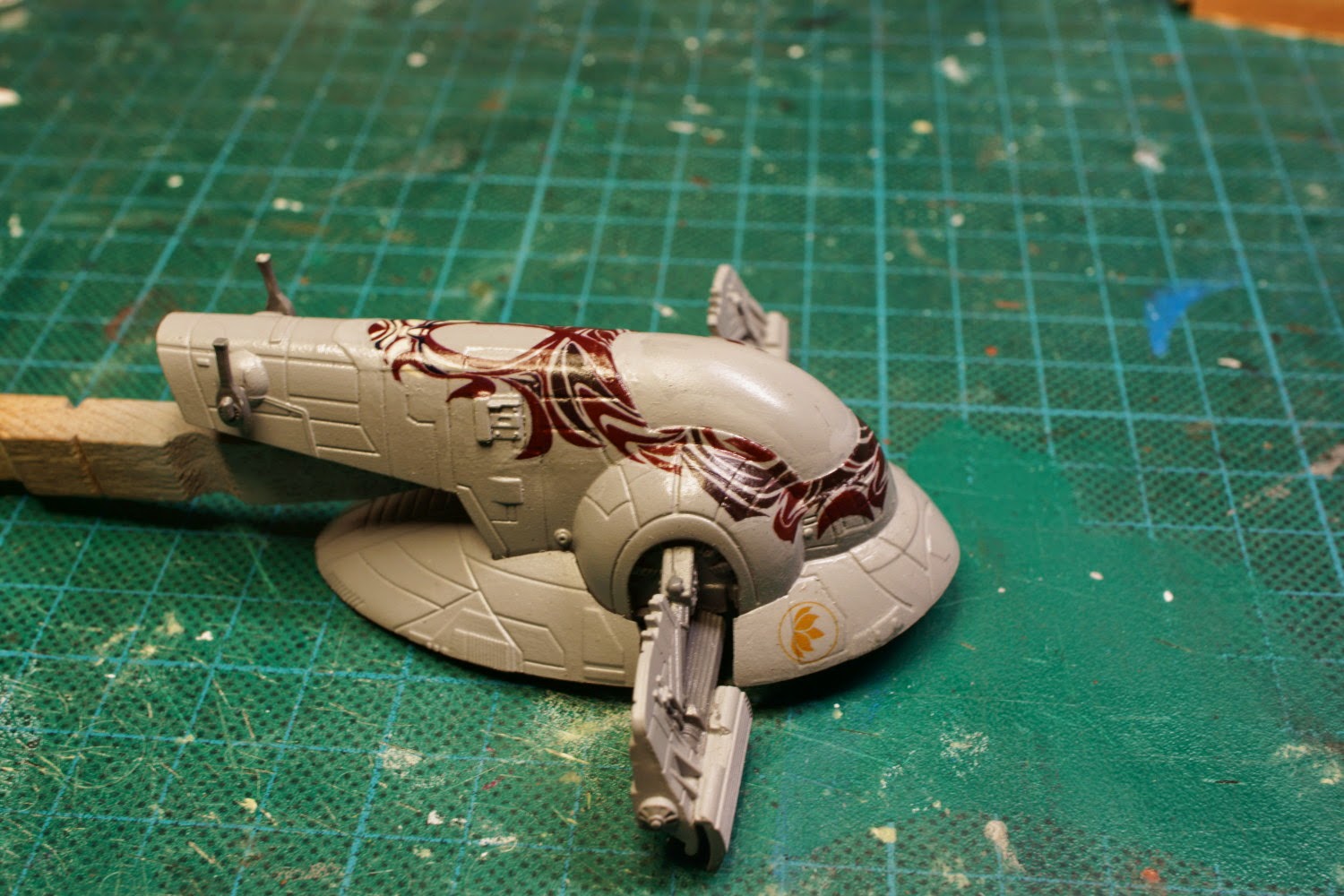 When I was happy with the placement I brushed more gloss varnish onto the model to seal the decals. Due to all the stretching and moving around, the decals did inevitably take some damage, not to mention that they couldn't quite cover everything. To fix this I had to go back and paint on top of the decals to repair them. I used a mix of VGC Gory Red and tiny amounts of VGC Black and old GW Liche Purple for the dark red tendrils, and a 2:1 mix of VGC Charred Brown and Black for the dark brown tendrils. 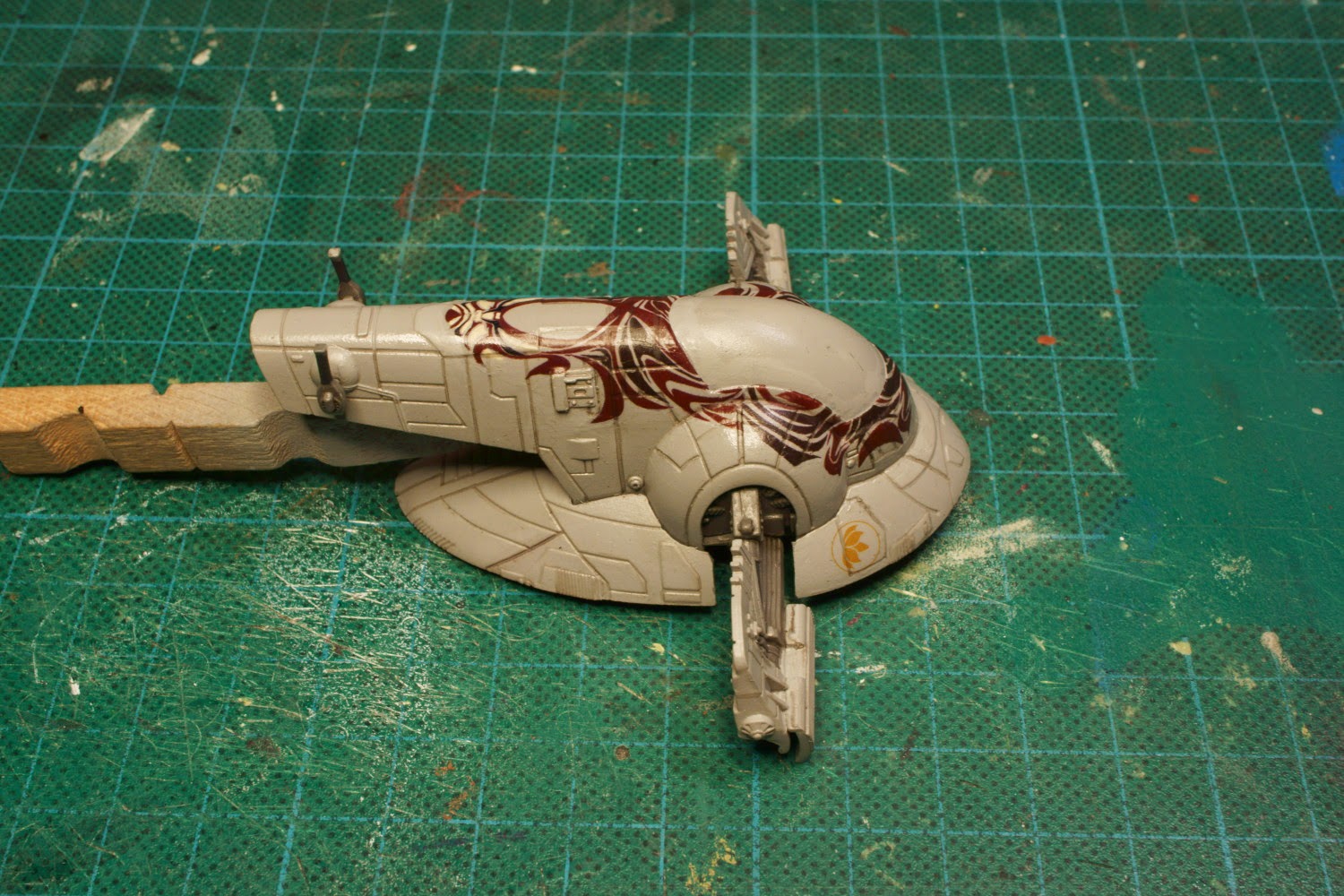 Shading the front was achieved by carefully painting a 2:1 mix of Army Painter Dark tone and Strong tone ink. The gloss varnish really helped with this, making the wash flow smoothly down each panel line, not to mention being very easy to remove if I made any mistakes. The panel lines covered by the decals was given an extra wash using pure Dark tone ink. 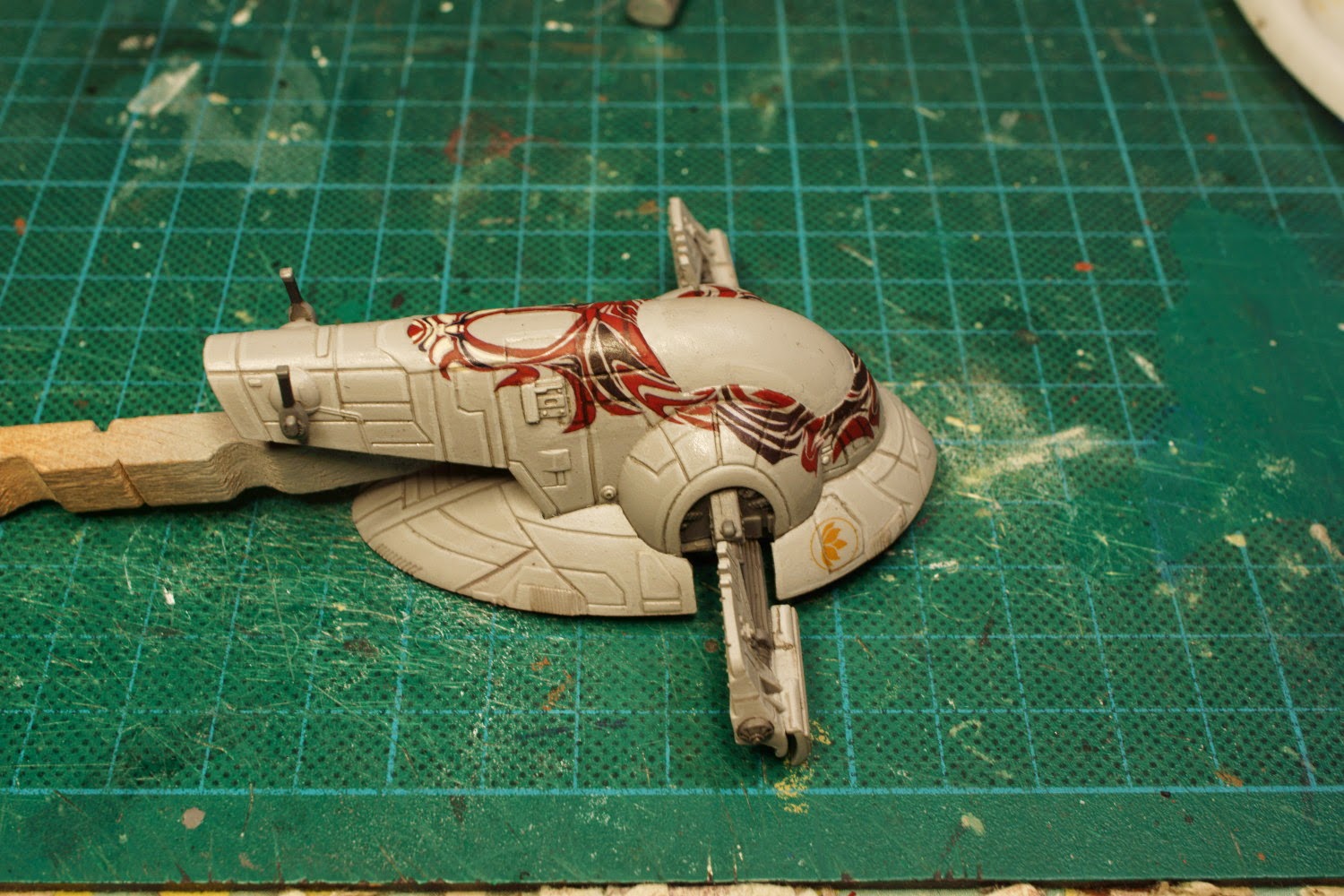 However I wasn't quite happy with the colours on the kabuki motif. Particularly the red had been much more vibrant on the original image. The solution was to paint another layer of paint on top of the decal, this time using VGC Scarlett Red. I also started highlighting the hull using a 3:1 mix of VGC Stonewall Grey and VGC Dead White. 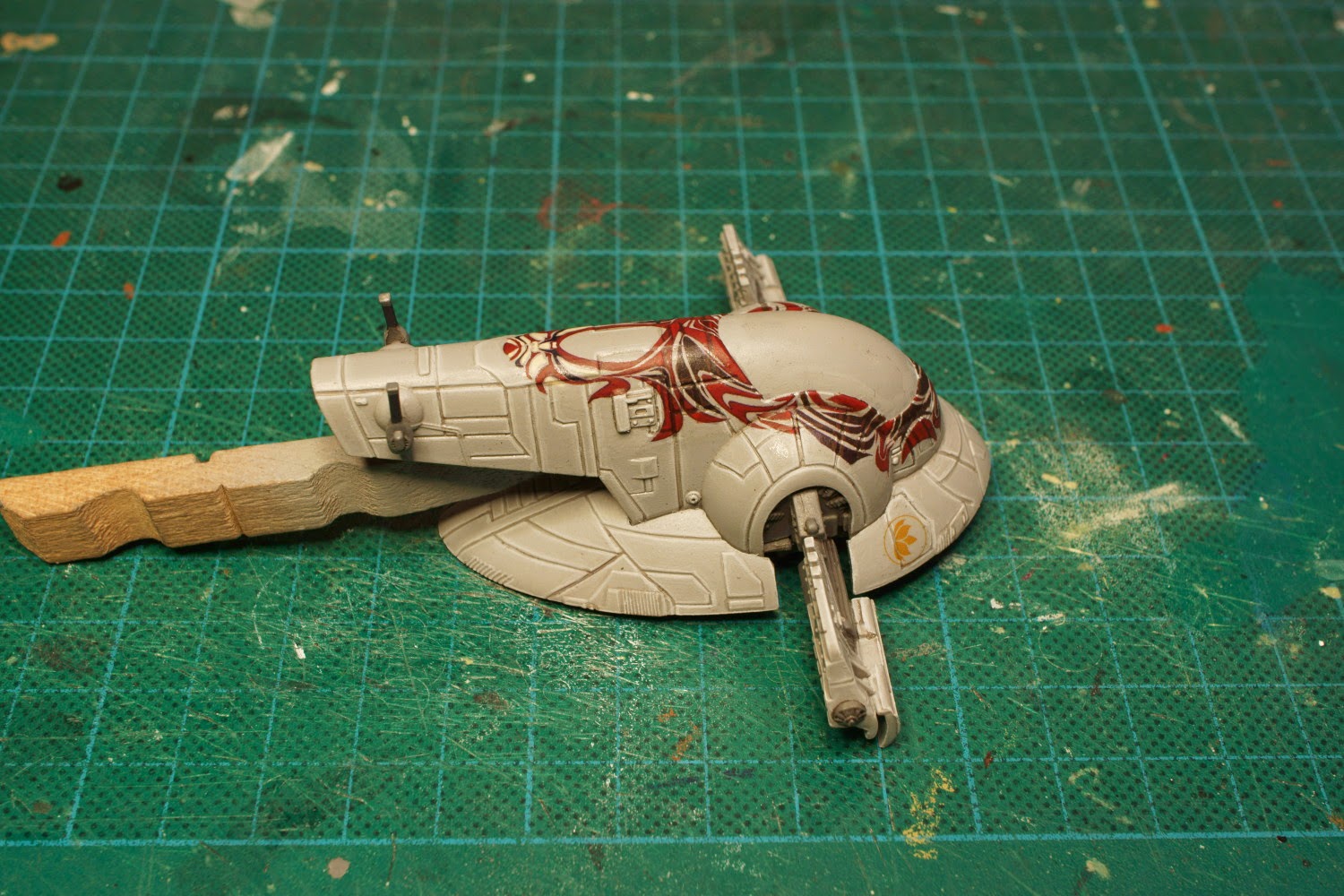 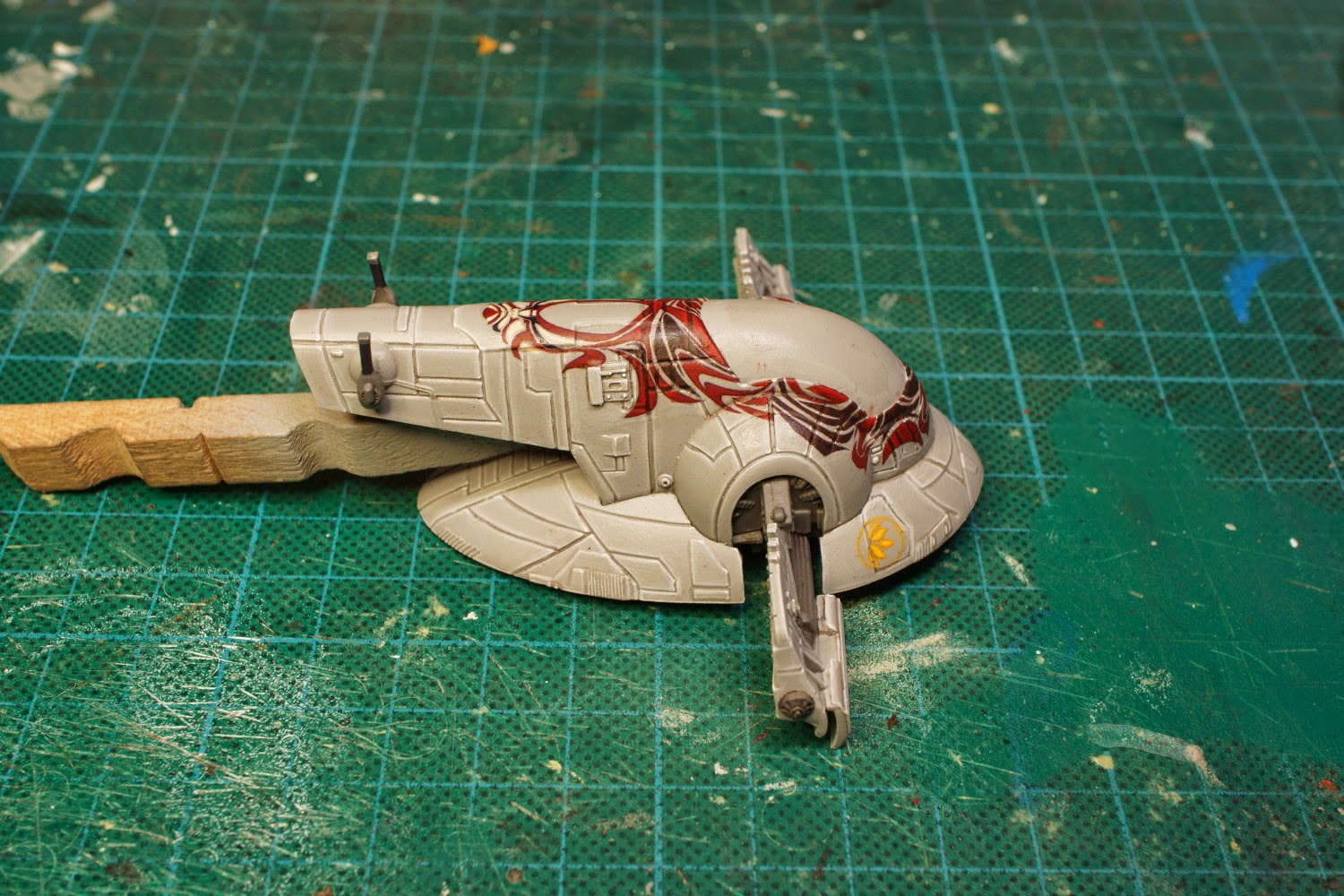 The second grey highlight used a 1:1 mix of Stonewall Grey and Dead White. The third and final highlight was pure Dead White that I carefully painted on select places as really nothing more than small dots. And that's about it for the front. For the back, any exposed mechanical bits, the rust and the damage I used the same basic methods as the first Kath Scarlet Firespray I painted. The only differences would be that I made the grey a bit darker and painted the engines with blue instead of yellow. Enjoy!
Upplagd av Macross_VF1 kl. 15:55:00