As promised a few days ago, here is the paint guide of the Wayfarer. The main inspiration for this paintjob is actually the artwork I used as reference when building the ship 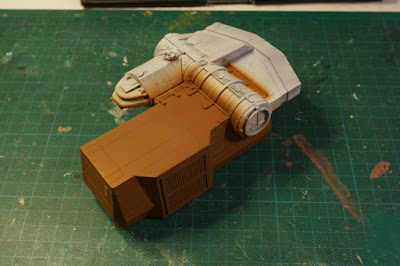 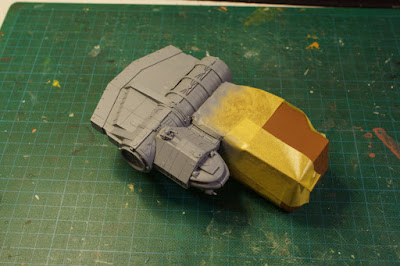 After the primer I airbrushed a 1:4 basecoat mix of VMC Chocolate Brown and VGC Beasty Brown on the container. When that had dried I masked the container and sprayed the rest of the ship with a 1:6 mix of VGC Sombre Grey (though my bottle has Shadow Grey written on the label) and VGC Air Stonewall Grey. 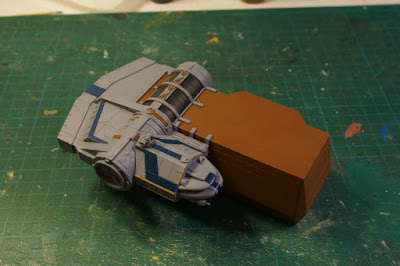 Before shading the model I picked out some of the most prominent details. All power conduits got a 1:4 coat of VGC Plague Brown and Beasty Brown. The Plague Brown was specifically added to help distinguish the conduits from the similarly coloured container.

The blue marks is a 1:2 mix of Sombre Grey and VGC Imperial Blue while the yellow stripes is a 2:3 mix of VCG Khaki and Plague Brown. Most lights, lenses and a few viewports was also painted with that mix. Finally, I painted part of the docking arm and the cockpit windows with VMC German Grey 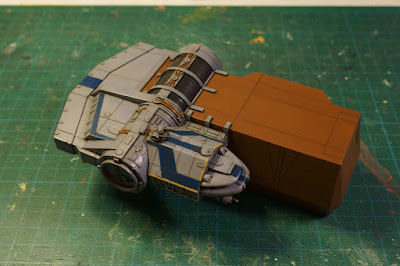 Lately I've begun using artist oils when shading models. They leave a somewhat dirty look that really suits Star Wars models and the clean-up process is far quicker as well. In this case I used a 3:2 mix of a black (Ivory black) and dark brown oil (Vandyke Brown). 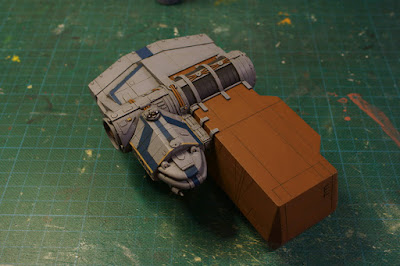 The first highlight, a 1:5 mix of Sombre Grey and VGC Stonewall Grey was applied to the main hull. One thing I've noticed is how different the VG Air and VG Colour ranges are despite claims to the contrary. Case in point, remember that the base coat was a 1:6 mix of VGC Sombre Grey and VGC Air Stonewall Grey. This means that if VGC Air and normal VCG Stonewall Grey were the same, the difference between a 1:5 and 1:6 mix should be barely noticeable, but it most certainly is.

As a sidenote, I managed to break both the cannon barrels at this stage. I used 1mm plasticard rod for the barrels so I knew they were fragile but I thought they were short enough that I could get away with it. Obviously that was not the case. In any case, they were later replaced with barrels made from piano wire. 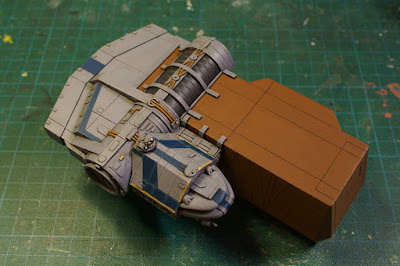 Normally I would have continued and finished the grey highlights but for some reason I decided to finish all the other colours first. The blue was first highlighted with a 1:2:2 mix of Stonewall Grey, Sombre Grey and Imperial Blue, while the second and third highlight added more and more Stonewall Grey.

The first highlight for the yellow stripes and details used a 2:1 mix of Khaki and Plague Brown followed by small amounts of white added for the second and third highlight.

The power conduits was a simple matter of adding increasing amounts of Plague brown to Beasty Brown until I had a slightly golden/brass look.

For the areas painted with German Grey I started with a 1:2 mix of VGC Cold Grey and German Grey, followed by a reverse mix of the same colours, and finishing with pure Cold Grey. For the cockpit windows I also added small dots of Stonewall Grey for the final reflection.

When all these details were done, I finally finished the highlights for the main hull. The second highlight layer was a 1:4 mix of white and Stonewall grey, while the third was the same colours but mixed in a 1:1 ratio. 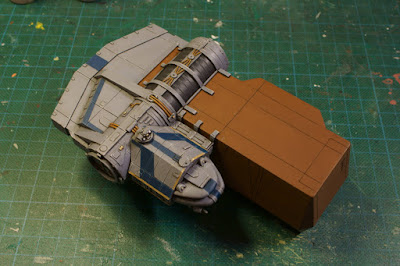 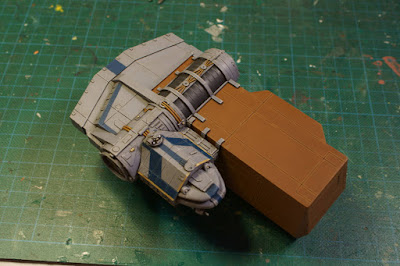 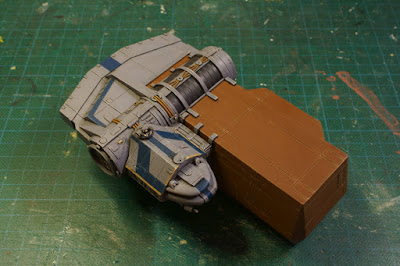 I deliberately waited to highlight the container until everything else was finished as I didn't want the paint to rub off when handling the model. Anyway, the container's first highlight was a 1:4 mix of Khaki and Beasty Brown, while the second one upped ratio to 1:2. The final highlight was almost pure Khaki with just a dash of Beasty Brown added. 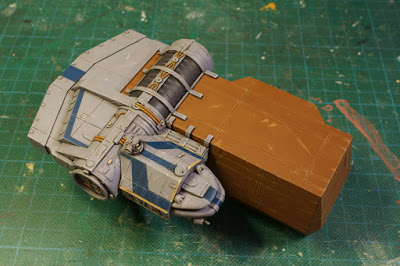 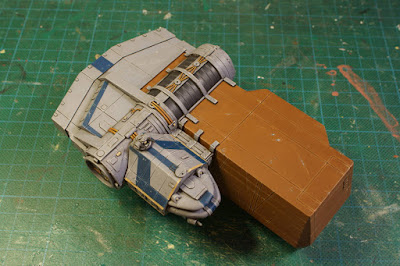 With the highlight stage done I could finally begin the weathering process. First I added scratches, dents and laser scoring with the same methods mentioned in my tutorial on the subject. The oils, as I mentioned earlier, gives the ship a somewhat dirty appearance by default, but I also added several streaks running down the hull and made the docking clamps grimy. Sadly I forgot to take a photo of that stage.
Upplagd av Macross_VF1 kl. 21:48:00