For the Mark 2 Y-wing I wanted to partly replicate a commission I did last year, the Yak-Wing. I painted that one using a lot of washes and I liked it so much that I've always wanted one of my own. I also wanted it to look good in both scum and rebel lists so I choose a fairly simple set of markings for it. Nothing fancy really, just a beat up and dirty Y-wing, fit for any prospective operator. 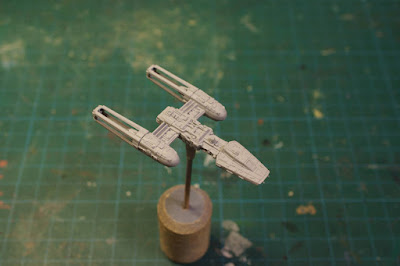 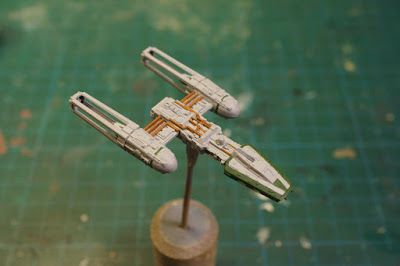 After a layer of Vallejo's Grey primer I base coated the entire model with VGC Stonewall Grey. I also picked out the power conduits with VGC Beasty Brown, the turret gun with a 1:1 mix of VGC Cold Grey and VGC Sombre Grey and the green markings was painted using a 1:1 mix of AP Angel Green and VMC Reflective Green. 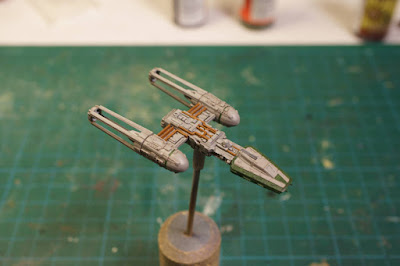 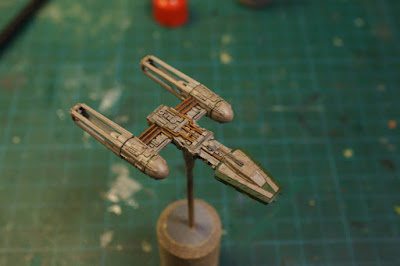 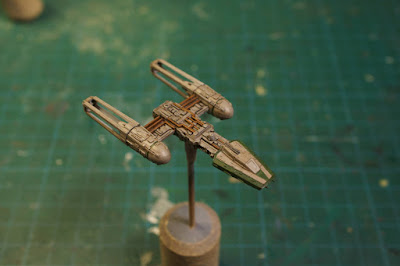 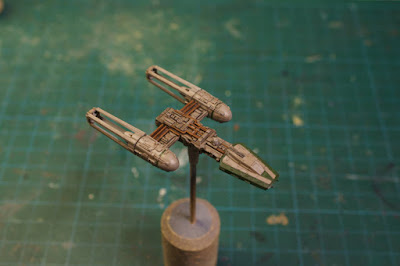 As I wrote earlier, I wanted to paint this Y-wing similar to the Yak-Wing which meant lots of washes. I applied them in the following order:
As you can see from the pictures above, the ship slowly changed in tone and hue due to all the washes. Also, when I write 'thin' in the description above, I mean that I diluted the wash with about 40-50% water before painting it. Another thing to remember is not to overdo the washing. What I did was more akin to painting several glazes, so take care not to overload the brush with wash. 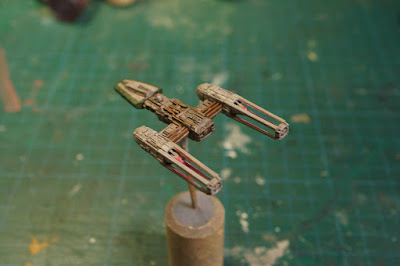 The engine glow was slowly built up using successive glazes of Army Painter Red Tone ink. When I had a good start I switched to VGC Red Gore that I added small amounts of White to. For the middle of the engines and some of the brightest glow effects I used White with only a dash of Red Gore added. 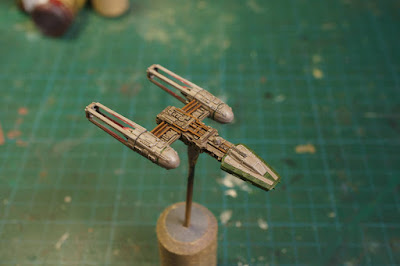 The pods and grey part of the nose was first drybrushed with Stonewall Grey, followed by a lighter drybrush using pure White. I did this to restore the colour and also cover and hide uneven pooling from the shading stage. It also serves as the highlight for the pods.

The panel lines on the nose was picked out using a 1:2 mix of Stonewall Grey and VGC Khaki. For the green panels I used a 1:1:1 mix of Reflective green, Angel Green and VGC Camo Green.

The conduits was restored with the starting colour (Beasty Brown), and highlighted the middle/hull with a 1:1 mix of Cold Grey and VGC Earth 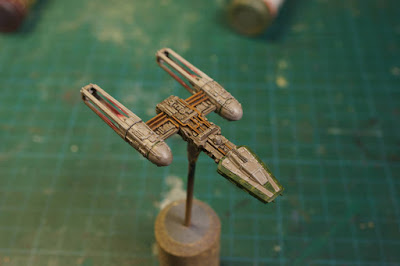 The grey parts of the nose got a second highlight of pure Stonewall Grey while the green was highlighted using a 1:1:3 mix of the previous highlight colours.

The conduits got their first highlight using a 3:1 mix of Beasty Brown and VGC Plague Brown. The second layer for the middle/hull was a 1:1:1 mix of Stonewall Grey, Cold Grey and Earth. 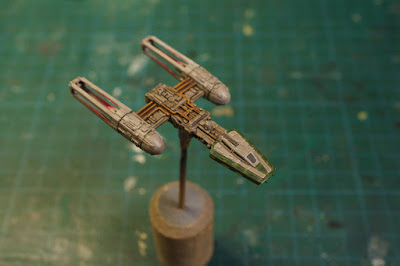 The second highlight for the conduits used the previous colours though in a 1:1 ratio. The most prominent edges of the green panels was highlighted with pure Camo Green and the same was repeated for the middle/hull only using a 1:1:3 mix of Earth, Cold Grey and Stonewall Grey. I also painted the windows with German Grey. 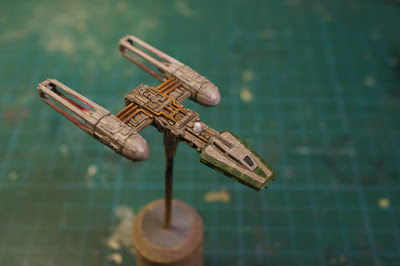 The third and final highlight for the conduits was a 3:1 mix of Plague Brown and Beasty Brown. The windows was washed with Dark Tone ink and I picked out the astromech with a 1:2 mix of White and Stonewall Grey. 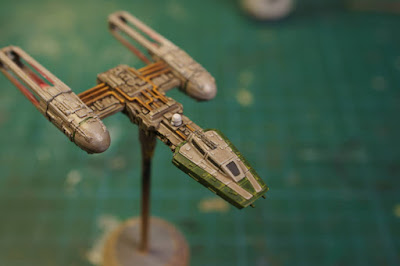 The turret guns got their first highlight using Cold Grey. However I thought it became too bright so I dulled the colour a bit using some more Dark Tone ink. 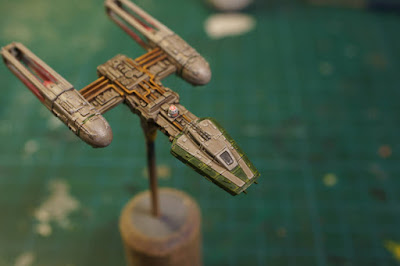 The mech was highlighted with pure White and given some detailing using VGC Bloody Red and German Grey. The turret got its final highlight using tiny dots of Stonewall Grey.

The window reflection was painted using German Grey mixed with Cold Grey and gradually mixing in Stonewall Grey while simultaneously removing the German Grey. For the final parts of the reflection I used tiny dots of White. 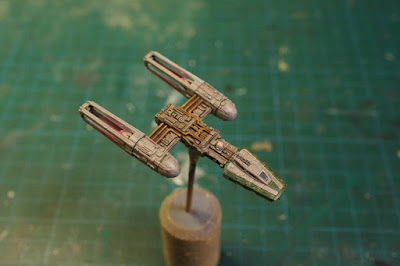 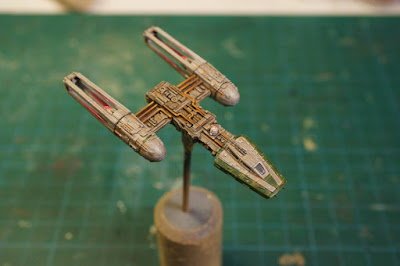 The ship was made to look beat up and damaged using my normal method. I also painted heavily diluted VGC Parasite Brown on some parts of the ship to represent rust. In the deepest rust recesses I also painted small amounts VGC Terracotta to improve the rust effect and make it look more interesting.

To finish the model I sprayed it with a layer of Satin varnish. When dry I followed up with a second layer of Matte varnish. The final touch was to paint the windows with gloss varnish.
Upplagd av Macross_VF1 kl. 18:30:00