After getting quite a lot of comments about how I paint astromechs I figured it was time to teach the world how I do it. It's not that difficult! Now you'll have to excuse my poor excuses for pictures but I'm not an Photoshop expert that can turn a picture of a pizza into a super model. They are really only here to provide a basic idea. 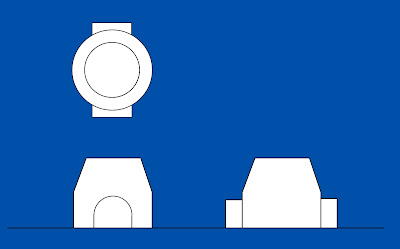 The shape of the droids found on the Y-wing model leads me to believe it is meant to represent either an R5 or R6 astromech droid. In this example I have chosen to paint it as an R5. 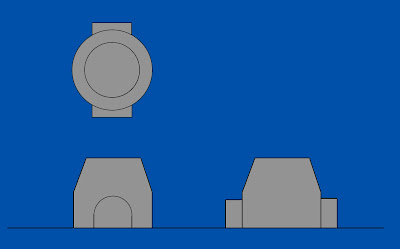 The first step is to paint a few layers of a bright grey and cover the entire mech with an even coat. I usually go for a 1:2 mix of White and VGC Stonewall Grey. It looks white enough and still makes it possible to highlight further. Of course in the picture above I've represented the basecoat with a darker grey to help visualise the effect. It's also the reason why I've used a blue background. 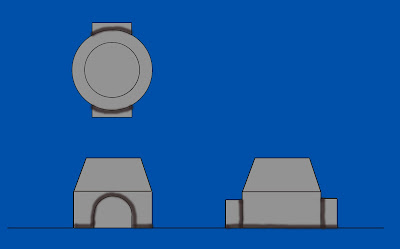 Next the mech needs to be shaded. I simply apply a wash using AP Dark Tone ink in the recesses around the shoulders/legs and around the base of the mech (represented above with some poorly painted dark areas). When the wash is dry, the basecoat is reapplied to clean up the mech, leaving the wash only visible in the recesses. Also of importance is a thin band of wash painted around the 'neck' of the mech. 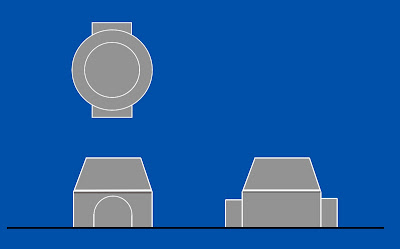 To highlight the droid, I simply use White to highlight all edges. I also paint another thin band around the neck, using White this time and taking great care to not cover the previous, dark band. 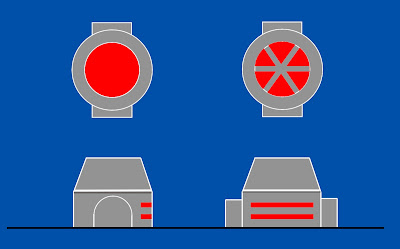 For details I paint a colour of my choice on top of the head and two thin stripes on the front/chest of the astromech. In the above example I have used red, but just about any colour can be used. I then paint thin lines across the head using the basecoat to create the pizza slice effect. 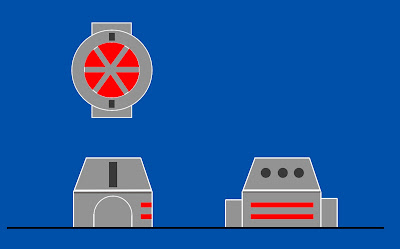 To finish off the droid, I paint a small stripe of a dark grey (Usually VMC German Grey) on each side of the head and also paint three small dots on the front of the head to represent the optics. When all is said and done you should have something that looks like the picture below. 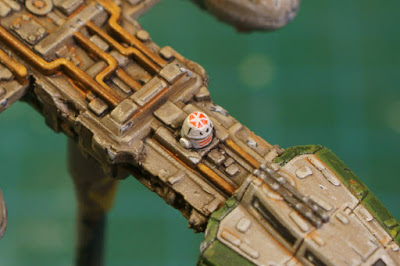 And that's all there is to it! Sure it's fiddly because of the tiny size but it's not impossible by any means. I'm pretty sure that the basic ideas presented in this tutorial can also be used to paint the astromech found on other ships. Of course, nothing beats a little basic research for inspiration. Do a search for astromechs and you'll find tons of examples. I hope this helps!