As I wrote earlier when I posted pictures of the 'Dune rider', people who haven't seen the YV-666 before often ask if the ship is some kind of sand crawler. It is often said that inspiration can come from anywhere and in this case it came from people who didn't know better. 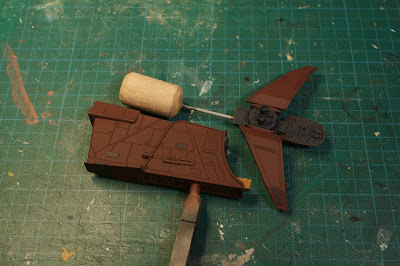 To make the ship easier to paint I separated the front from the back. This was something I saw a few people posting about before the repaint and I figured I should attempt it as well. At the very least, having the option to split the ship in two parts should make it easier to store. 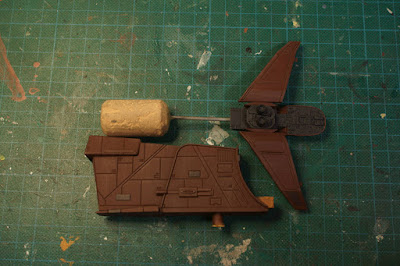 While it isn't always the most visible, I knew from the beginning that I wanted the ship to look heavily weathered. To that end I painted a lot of streaks running down the sides of the fuselage/across the width of the wings.

To achieve the effect I used a 3:1:1 mix Charred Brown, Terracotta and VGC Khaki which I thinned heavily. I then took a flat and wide brush normally used for terrain painting and dipped the tip of the bristles into the mix. After wiping off most of the colour I basically drybrushed the ship, though only going in the direction of the streaks. For instance, for the sides of the hull, that meant starting at the top and going straight down, in the direction of gravity.

After I had a good start I repeated the process with a 1:1:1 mix of the previous colours, though applying it much more sparingly than before. 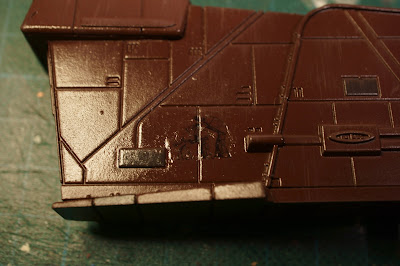 I had intended to apply several Star Wars related graffiti decals on the ship, however I forgot to take into consideration that transparent decals and a dark background do not work well together. Only one survived though it's a good one. 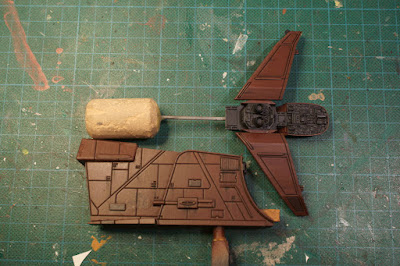 The ship was shaded using a black oil wash. During the clean up process I used the wash to add several grime streaks running down the hull. 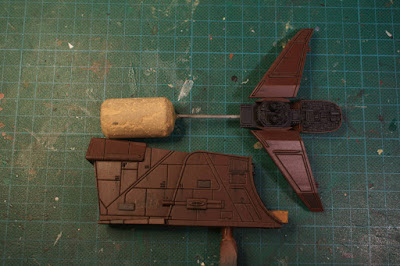 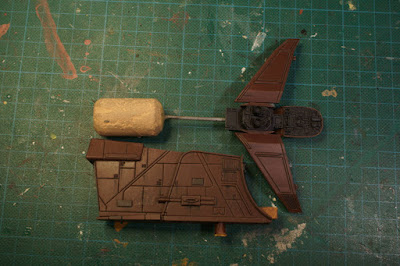 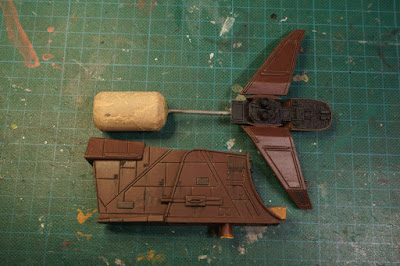 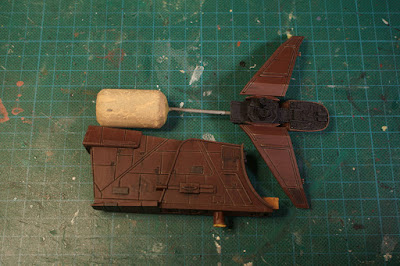 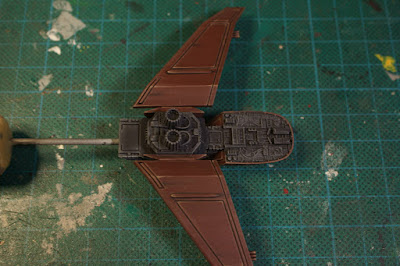 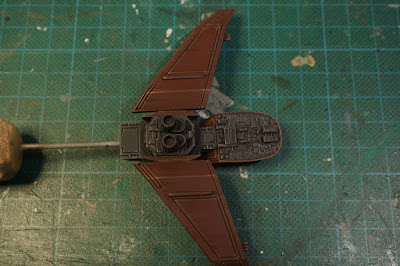 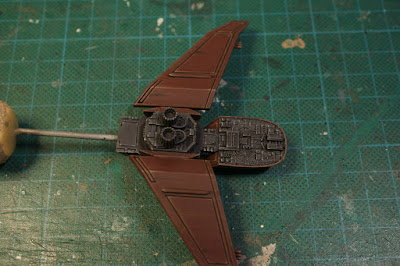 To highlight the engines and exposed mechanical bits I first drybrushed a 1:1 mix German Grey and VGC Cold Grey. This was followed up by a second, lighter, drybrush using pure Cold Grey. I then used the base German Grey to clean up and restore any areas that had been too heavily drybrushed.

With drybrushing done, I went back with and applied a more traditional highlight using a 1:1 mix of Cold Grey and VGC Stonewall Grey. The second (or fourth, depending on how you count) highlight was pure Stonewall Grey. 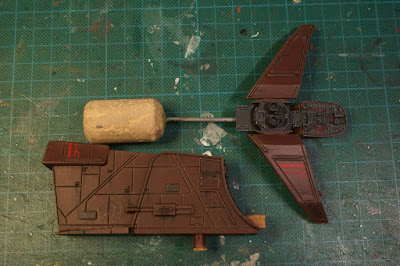 A purely brown and grey ship would have been boring so I decided to give it some red details to make it more visually interesting. I painted all cables with Terracotta which I shaded using AP Strong Tone ink wash. They were later highlighted using VGC Scarlett Red and VGC Bloody Red. 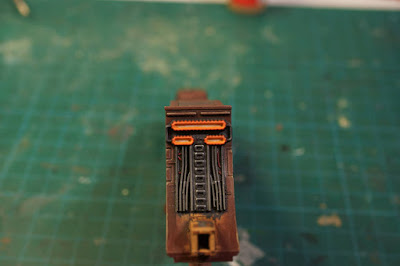 I wanted an orange engine glow for the engines so I started by painting several glazes using VMC Orange Fluo. I later added VGC Hot Orange and continued to slowly build up the glow. For the middle of the engines I painted VGC Plague Brown. For the very middle I also added some White to the Plague Brown. 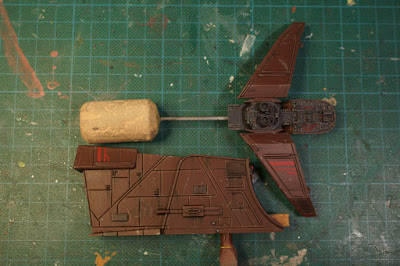 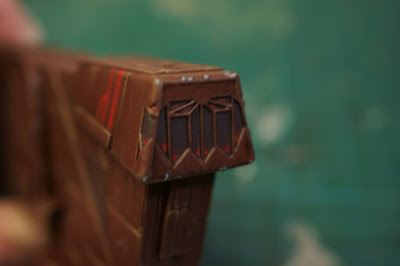 The ship was made to look beat up and damaged using my normal method. I also painted heavily diluted VGC Parasite Brown around the mechanical bits to represent rust. In the deepest rust recesses I also painted small amounts VGC Terracotta to improve the rust effect and make it look more interesting.

The bridge windows was painted using German Grey with a tiny amount of the Scarlett red added. To achieve the reflection I added small amounts of Scarlett red to the German Grey mix until I reached pure Scarlett Red. The brightest part of the reflections used Bloody Red. After varnishing the model I painted the windows with a few layers of gloss varnish to give it a proper shine.
Upplagd av Macross_VF1 kl. 22:30:00