The Nashtah Pup was rather straightforward paintjob with the exception of one thing, the base coat. The commissioner wanted it to have the same colour as a YV-666 with the factory paintjob. However my personal YV was already repainted so I couldn't use it as a template. Nor had any of my closest gaming pals bought it at the time of painting. Instead I had to look at photos of the ship on the net to guesstimate a proper mix. 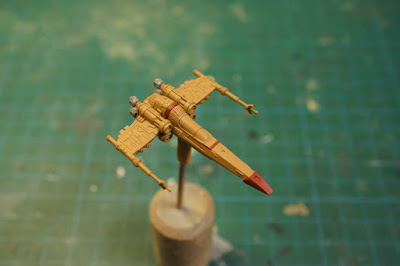 I went with a 3:1:2 mix of VGC Earth, VGC Plague Brown and VGC Dwarf Skin as the base colour which I airbrushed all over the ship, over a grey primer layer I had applied beforehand. The engines exhausts were picked out using a 1:3 mix of VMC German Grey and VGC Cold Grey (basically some leftover paint from the N'dru Suhlak I painted at the same time), while the red details used a 1:1 mix of VGC Terracotta and VGC Scarlett Red. 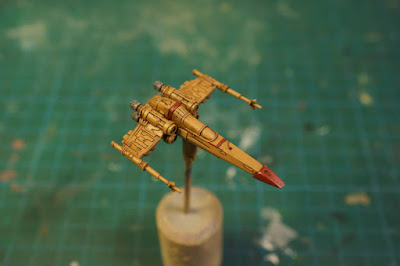 The ship was airbrushed with a layer of gloss varnish in preparation for the washing step. To shade the majority of the ship I used a dark brown oil wash. The only exception was the engines, which I washed twice using AP Dark Tone ink. 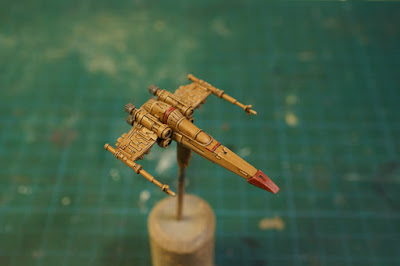 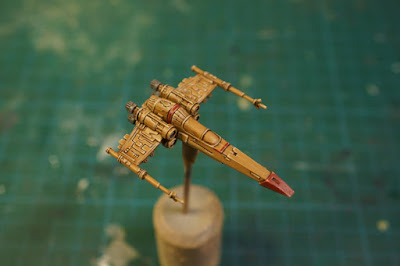 When the oil wash had dried I sealed it with a layer of matte varnish. This is a rather crucial step, as trying to paint further layers on top of oil and gloss varnish can be problematic to say the least.

The fuselage was highlighted with the following colours:

The red details were instead highlighted in the following manner: 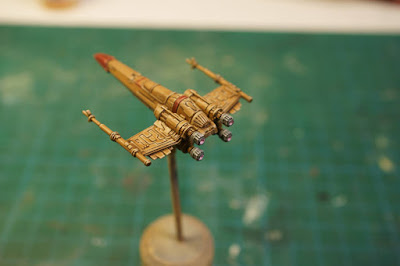 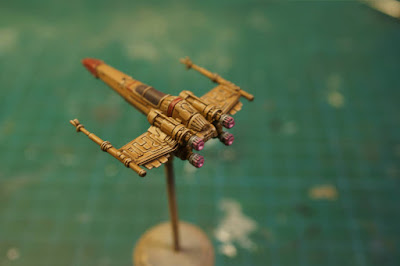 The engines were highlighted by first using Cold Grey, gradually mixing in VGC Stonewall Grey until I had reached pure Stonewall Grey.

To get the engine glow I started by applying thin glazes of VGC Gory Red which I mixed with small amounts White until I had a nice pinkish glow. For the middle of the engines, I used even more White mixed into the Gory Red, until it was almost white. Unfortunately, due to the narrow and deep exhausts, the brightest glow is difficult to see. 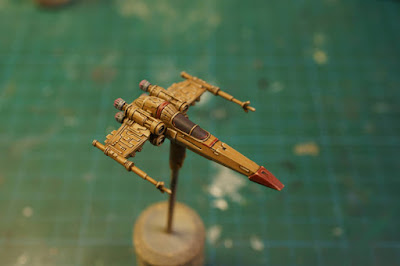 The cockpit canopy was painted using German Grey with a tiny amount of the red base mix added. To achieve the reflection I added small amounts of the base colour to the German Grey mix until I reached pure red base. The brightest part of the reflections used the same colours and mixes as the highlights for the red details. After varnishing the model I painted the canopy with a few layers of gloss varnish to give it a proper shine.
Upplagd av Macross_VF1 kl. 21:27:00