The Arquitens was never going to be a very special ship in terms of its paint job. The commissioner wanted it to have similar colours to the Raider and/or Gozanti so that is what I tried to achieve. Besides, boring paint job aside, the ship is spectacular enough to grab the attention of passer bys regardless. 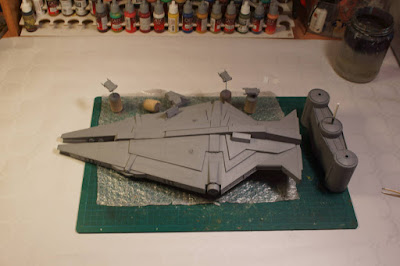 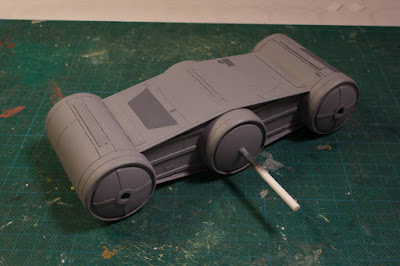 Next I manually painted some panels with a 1:1:2 mix of VMC German Grey, VGC Shadow Grey and VGC Cold Grey.

Both this mix and the base coat was specifically formulated to mimic the colours found on Fantasy Flight Games' X-wing Raider ship. While certainly not a 100% match, they are certainly close enough that I will recommend them to anyone wanting to do touch ups and/or repairs to their Raider. 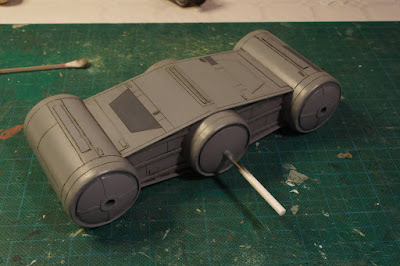 The ship was given a solid coat of gloss varnish before I did anything else. This helps prevent damage to the first few layers of colour and makes it much easier to apply the shade.

For the shade I used thinned black oil paint, applied directly to the panel lines. I left this to dry about a day before I went over the ship again with q-tips dipped in white spirit to remove any excess. Due to the size of the ship, I had to do this in pre-planned stages and it took me about three days before everything was finished. 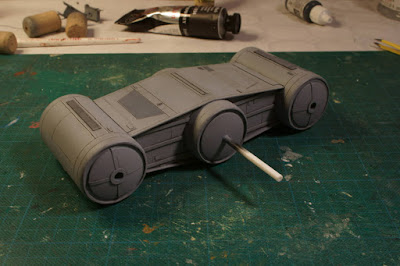 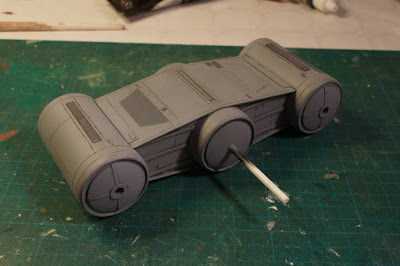 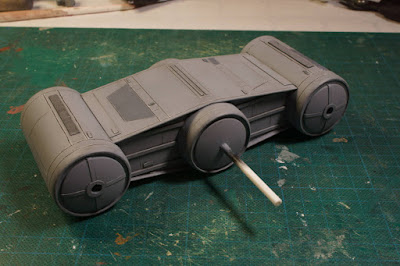 To seal the oil wash I airbrushed the ship with a layer of matte varnish which in turn meant I had reached the highlight stage. The base grey colour was highlighted in three stages:

For the darker grey panels I instead used the following mixes: 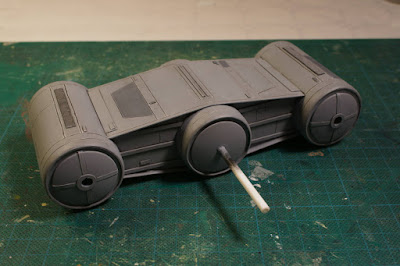 Normally I try to do all highlighting in one go, but due to the size of the ship I was afraid that some of that highlight would ultimately be worn away and/rubbed off in some places just by virtue of having to handle the ship a lot.

While I always take precautions to avoid this, normally by mounting the models using an assortment of improvised tools, for the Arquitens it just wasn't an option for the main part of the ship. Too bloody big!

My solution in this case was leave the edges of the ship until the very end. A wise decision it turned out as some of the paint had indeed been lost due to my handling of the ship. After some quick repairs I could apply the same highlights on the edges as for the rest of the ship. 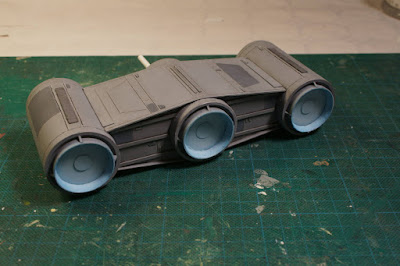 I airbrushed the engine glow using a mix of VMAir White and VMC Blue Fluo. Unfortunately I can't give any exact ratios as I was constantly adjusting the mix to fit my needs but I always had a lot more white than blue. If I remember correctly I started with something like a 1:6 blue to white ratio and ended with a 1:2 ratio. 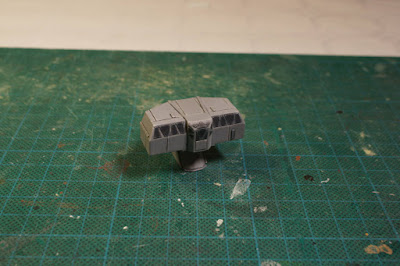 The final bit of detailing was the windows for the bridge and turrets. I started with a 1:2 mix of AP Black and German Grey. Normally I try to do some extravagant reflections when painting windows but due to the small size of the bridge windows (the smallest ones are only about 1.5-2mm across) I instead highlighted the edges, starting with German Grey and ending with Stonewall Grey.
Upplagd av Macross_VF1 kl. 21:44:00