Painting a Rogue One X-wing

I honestly forgot about this one. And I didn't even have a shiny new game to use as an excuse for my forgetfulness. No matter, here's how I painted a pair Rogue One X-wings, now known as the Partisan X-wing.

When I was first commissioned to paint these ships, the only sources for the paint scheme were a few pictures of an X-wing half-covered with a tarp. Not much to go on, and additionally no one really  knew if this was truly something that would be featured in the upcoming Rogue One movie.

This led to quite a bit of back and forth between me and the commissioner in order to decide upon a paint scheme. Now both of us are quite happy with what we decided upon, but ironically just a week or so after I had finished the ships, the first full sneak peeks arrived of the ship. It turned out the fighter was called the 'Partisan X-wing' and featured quite a bit more black than I had painted. Curse you Murphy! 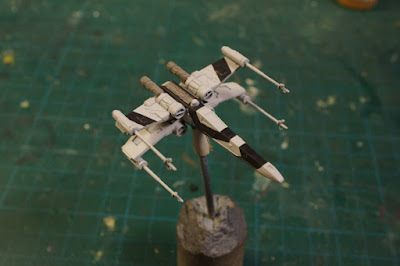 I started, as I so often do, with a grey primer. In this case, the primer also formed the base coat. I picked out the black markings with a 1:1 mix of AP Matt Black and VMC German Grey. The engines and any exposed mechanical bits was painted with a 1:6 mix of VGC Earth and VGC Cold Grey. 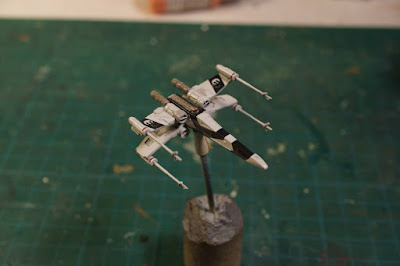 I painted the rebel logos on the wings with the base coat and I also picked out the astromech dome with AP Gun Metal. To give the ship some extra colour I painted some red bands around the base of the laser cannons and the astromech with some VGC Red Scar. Finally, a few panels were painted with a 1:1 mix of Cold Grey and VGC Stonewall Grey. 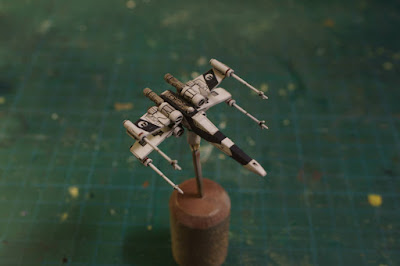 With that done I airbrushed the ship with a few layers of gloss varnish in preparation for the shading stage. I made an oil wash and applied it to all recesses. When dry I removed the excess, taking great care to make the ship look slightly dirty. Finally, I sprayed a layer of satin varnish in order to seal the wash. 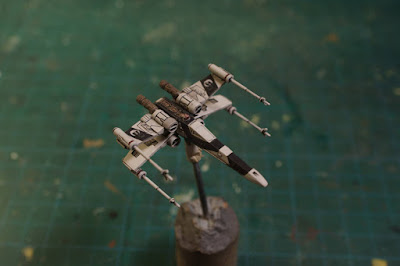 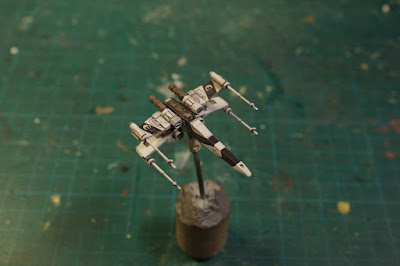 And as I often do, I have broken down the highlighting in stages:
Black markings
White Fuselage

Off grey panels
To further improve the dirty look of the ship I painted the off grey panels with some AP Soft Tone ink mixed with some VGC Plague Brown in. I also washed the engines and exposed mechanical bits with AP Strong Tone ink. With the wash dry, I drybrushed a 3:2:1 mix of Cold Grey, Stonewall Grey and Earth on the engines and mechanical bits in order to highlight them. 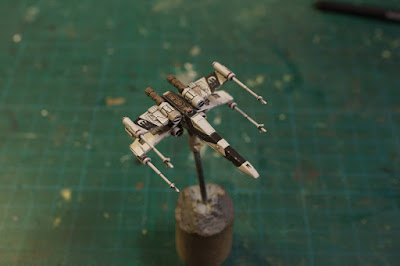 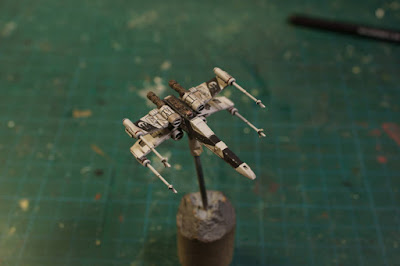 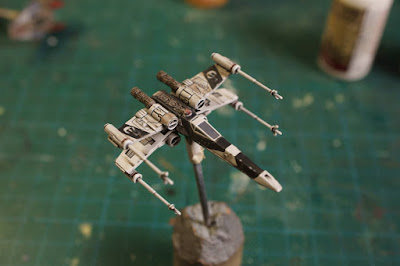 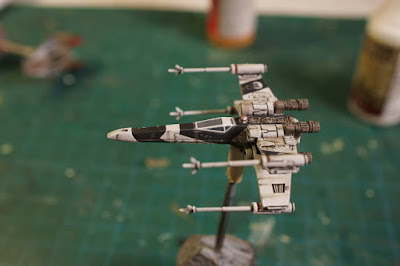 The ship was dented, scratched and chipped using my usual method. After that I set about dirtying the ship. The streaks was achieved by first applying small dots of black oil paint to just about every chip painted earlier. I then dipped a brush in some white spirits and gently dragged out the oil paint into long streaks.

I repeated the process with a dark brown oil paint called Raw Umber only to a smaller degree. Finally, for any streaks located on top of the black marks, I painted thin lines of diluted Earth in order to make the streaks more visible. 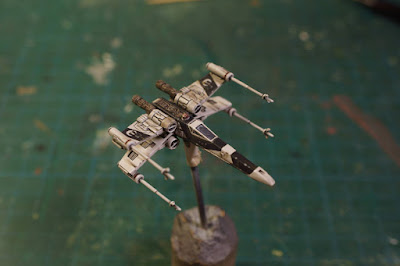 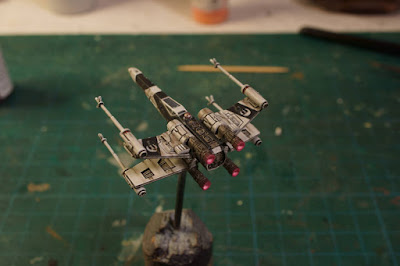 The cockpit windows were painted with VGC Sombre Grey mixed with some Matt Black, shaded with Cold Tone ink and when dry, I reapplied the base colour, taking great care to leave the shade visible in the recesses.

The reflections on the windows were achieved by taking Sombre Grey and slowly mixing in increasing amounts of Stonewall Grey for each successive layer. For the very final layer I used pure Matte White.

The engine glow was achieved with several thin glazes of Scar Red. The very middle was painted with Scar Red mixed with some Matt White.
Upplagd av Macross_VF1 kl. 19:44:00