I'm still not sure where I got the idea from, it might have been an off hand comment on a forum somewhere. However from the point it entered my head, I just knew I had to make a G-1A look as similar to a R-9A Arrowhead as possible.

Luckily, the Arrowhead and indeed most ships featured in the R-type series are rather well documented so I had no problem finding good sources. If anything, there might even be too many versions of the ship floating around. 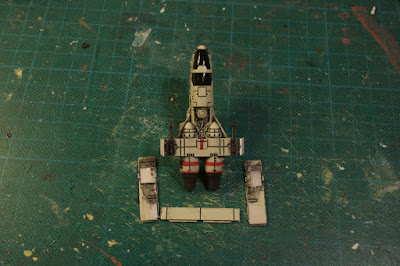 First order of business was removing the panels to the rear of the ship. I was very careful when doing this, trying to damage the panels as little as possible. 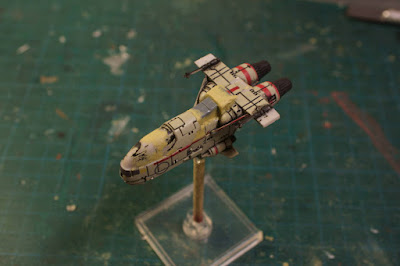 Next I had to fix the cockpit and cover part of the exposed details in the middle of the fuselage. The cockpit in particular was important to get right as most R-type ships have a large, elongated and almost bulbous cockpit without any supporting frames. Also I used quite a lot of milliput for this stage. 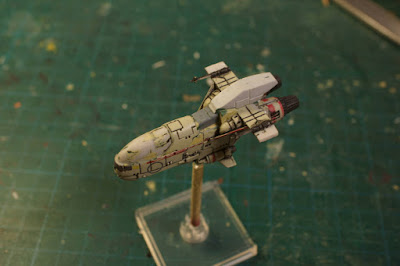 Another common feature of many R-type ships is a raised part to the rear of the ship, something the G-1A lacks. For this I raided my bits box and found an old leftover part from a plastic Gundam kit. With some additional modification it found a new home on my G-1A R-type ship. 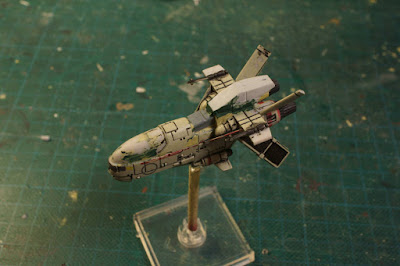 The panels I had removed earlier was trimmed down and modified to act as several fins all over the ship. I also made a simple cast of one of the engines and glued the resulting copy in place between the engines, right below the previously added Gundam piece. Unfortunately it's only barely visible in the above picture. 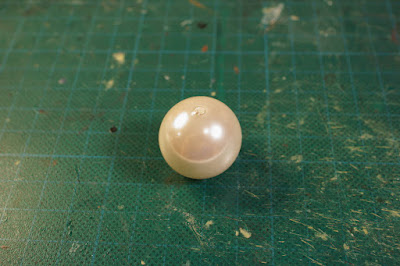 For the Force unit I originally wanted to nab one from some R-Type Gashapon toys I know can be found on the interwebz. However I seriously underestimated how rare they are, and when they do show up, they go for ridiculous sums.

The only realistic option was to build one by myself. however that presented an entirely different set of problems. By far the most difficult part was to find a ball or bead in the right size and material. Luckily after much searching I found something suitable. It's a plastic bead normally used for home made jewelry but I gave it a new purpose in life. 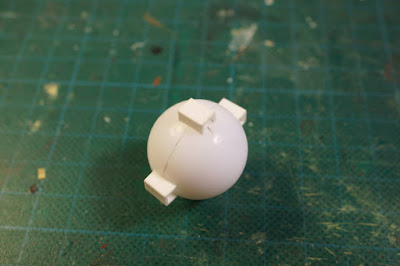 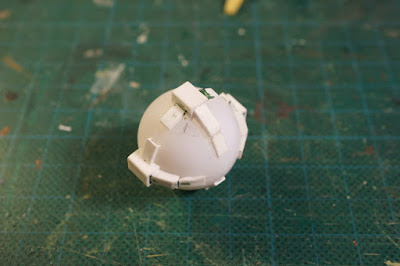 Round shapes are always more difficult to work with and a perfectly round ball is just about the worst geometric shape possible. Still it had to be done, so I started by stripping the the fake pearl layer and then carefully measuring out the center line and adding the first supporting structures.

Next I added the 'claws' surrounding the unit. Again, this was not nearly as simple as I would have liked due to the fact I was working with a round shape. 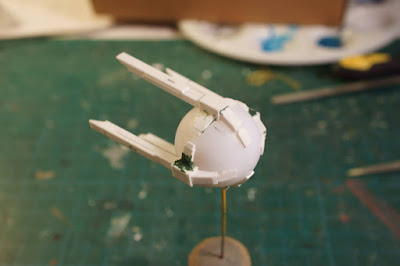 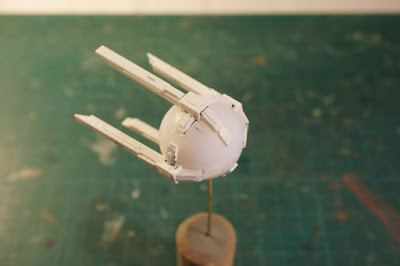 After the 'claws' I added the 'control rods' to the back of of the Force unit. Supposedly, that are called that in the R-type universe so I'll stick with the term. Finally I could add some much needed details and greebles.
Upplagd av Macross_VF1 kl. 21:57:00