Along with the K-wing, the ARC-170 draws a lot of inspiration from World War 2 aircraft. As such I just knew I had to paint my ARC as some kind of WW2 bomber. After some research I found the Executive Sweet and right then and there I knew how my ship would be painted.


The lack of the wing tip guns should be immediately apparent. I knew this would be a dividing subject, with some people liking it while others would not. Still I would not allow myself to be swayed. The guns had to go, if for no other reason than the fact that the real-life Mitchell did not have any large guns mounted on the wing tips. 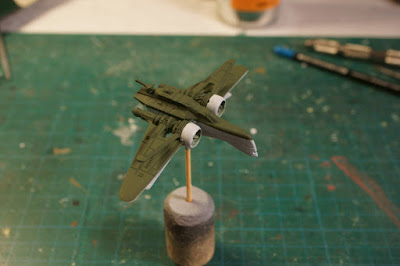 I started with 2:1 mix of Vallejo's USN Light Ghost Grey primer and VGC Wolf Grey. I then masked off the bottom half of the ship and the engine cowls and airbrushed the top with VMC Reflective Green. 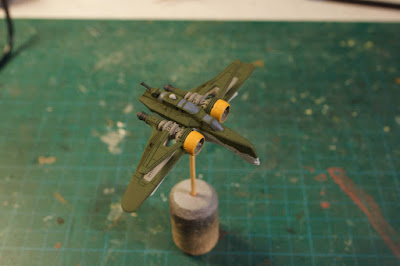 The engine cowls were painted with a 1:1 mix of AP Daemon Yellow and VGC Plague Brown and the windows got a coat of VGC Sombre Grey. Finally, I used Reflective Green to extend the green dividing line between the top and bottom half of the fuselage in a wavy and irregular pattern. With that done I airbrushed the ship with a few layers of gloss varnish in preparation for the shading stage. I made a black oil wash and applied it to all recesses. When dry I removed the excess and left it to settle over the night. I later sprayed a layer of satin varnish in order to seal the wash. 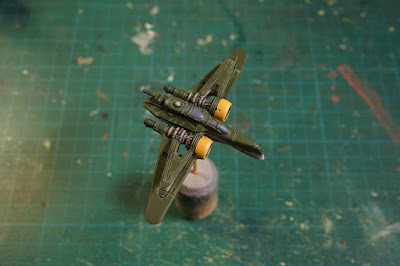 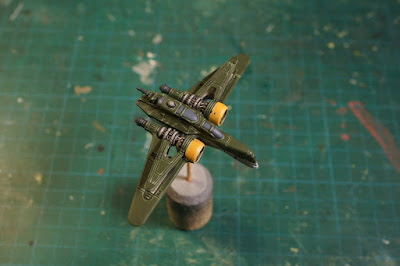 Highlighting was mainly done in three layers for each colour with the exception of the engines which I first shaded further with a thin layer of AP Strong Tone ink:
Top of the ship
Bottom of the ship 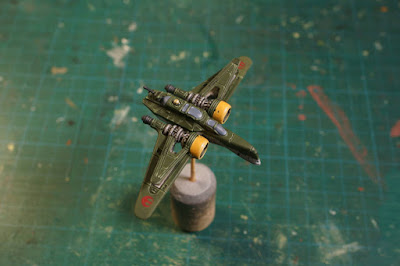 The astromech's body was painted with Stonewall Grey, shaded with some AP Dark Tone ink, and highlighted with Matt White. The head was then painted with AP Gun Metal and detailed with the same yellow mix that I had earlier used for the engine cowls. Finally, I painted some marks and lenses using German Grey.

Unfortunately the yellow and metallic colour didn't work properly together; both being quite bright and reflecting light to a great degree meant that it was hard to distinguish the colours from each other. In order to solve this problem I went back and repainted the dome, only using a 1:1 mix of Cold Grey and Sombre Grey instead of the metallic paint.

The Rebel logo on the wings were simply painted using some VGC Scar Red. I choose this colour specifically for it's lack of brightness. I feared a brighter red colour would have shifted the focal point away from the rest of the model and that type of distraction was not what I needed. 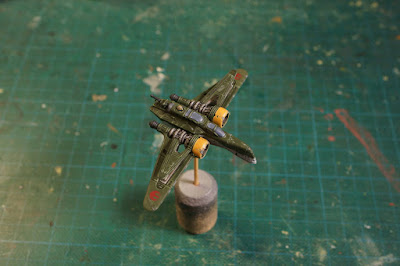 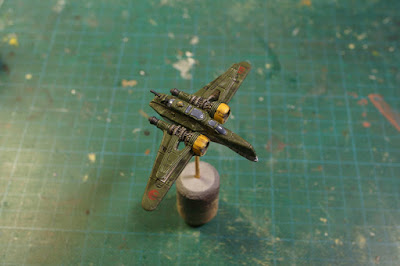 The ship was dented, scratched and chipped using my usual method. After that I set about dirtying the ship. The streaks were achieved by first applying small dots of black oil paint to some of the chips I had painted earlier. I then dipped a brush in some white spirits and gently dragged out the oil paint into long streaks.

I repeated the process with a dark brown oil paint called Raw Umber, only to a smaller degree. Finally, on many streaks I painted thin lines of diluted Earth in order to make the streaks more visible.

The engine glow was achieved with several thin glazes of Scar Red. The very middle was painted with Scar Red mixed with some Matt White. Unfortunately I completely forgot to take a picture of this stage though it's pretty damned similar to many other ships I've painted so you should be able to get an idea of how it looks.
Upplagd av Macross_VF1 kl. 19:55:00