While certainly a good looking paint scheme I knew that the Razor Squad ARC-170 would be tedious to paint. Of course, reality stepped in and gave me a helpful push. And in this case it was a good push.


The first pictures of the ship I was provided with proved to be a Transformers type toy of the ship. Obviously not quite as accurate to the original as I would have liked. However, with some research I found better versions of the toy, particularly good views of the nose art. 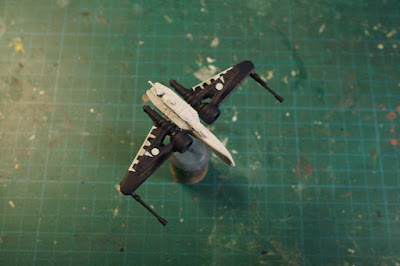 I started with my customary layer of grey primer. I then masked the fuselage and part of the wings before airbrushing a 1:4 mix of AP Matt Black and VGC Imperial Blue.

At this stage I realized two things: The first blue layer was too dark and that Imperial Blue is a rather thin paint that doesn't cover terribly well. In order to fix this I changed the ratio to 1:6 and airbrushed the ship again. 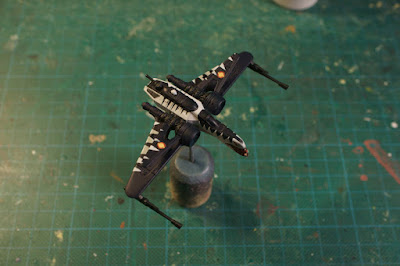 With the base coats in place I could fix the other important parts. The cockpit area and the top of the front fuselage was painted with the first blue mix (1:4 ratio).

Now why would I use this one as opposed to the second coat? Well, remember what I said about Imperial Blue being a thin paint? That was proven quite thoroughly when I first tried the 1:6 mix. When painted directly on top of the bright grey coat, it shined through almost like a sun, making the blue a lot brighter than one would expect. With enough layers it would obviously reach the right hue, but I instead decided to take a short cut.

Anyway, I painted the engines, guns and engine intakes with a 1:1 mix of VMC German Grey and Matt Black.

The dags/spikes/triangles (I don't know what these are called) on the wings were cleaned up and painted with a combination of the blue and grey base coats.

The round markings on top of the small wings/S-foils were first painted with a 1:1:6 mix of VGC Khaki, AP Matt White and AP Daemon Yellow and later painted with some VGC Terracotta. 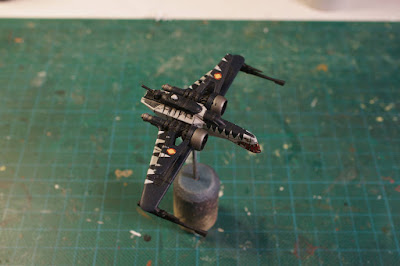 The engine cowls and exhausts were painted with some AP Gun Metal. Normally I avoid using metallic paints on X-wing models as I'm not always satisfied with how metallic paints looks on such a small model. In this case however I didn't have much choice.

With that done I airbrushed the ship with a few layers of gloss varnish in preparation for the shading stage. I made a black oil wash and applied it to all recesses. When dry I removed the excess, taking great care to make the ship look slightly dirty. Finally, I sprayed a layer of satin varnish in order to seal the wash. 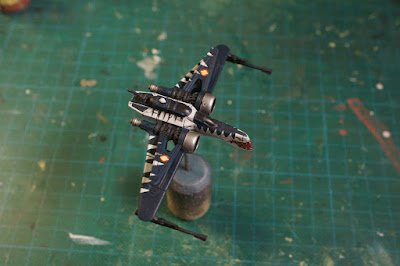 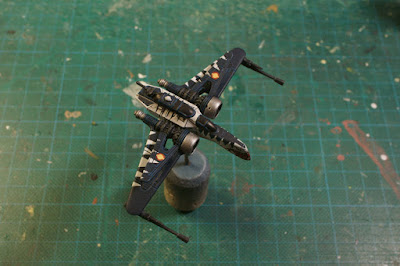 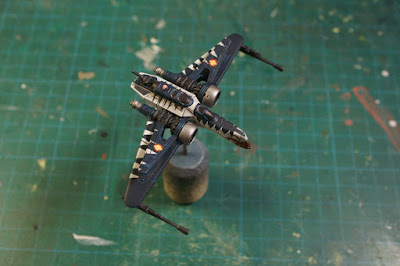 Guns and Engines
The engine cowls and exhausts were highlighted with some AP Shining Silver while the nose art was mostly untouched due to the multitude of small details; Highlighting it just would have been an exercise in frustration and futility. 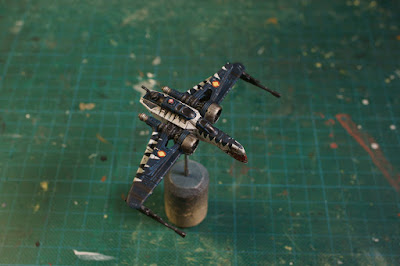 The ship was dented, scratched and chipped using my usual method, though with some exceptions. The black/dark grey of the engines and guns were first chipped with some Cold Grey and filled in with Gun Metal while the engine cowls was chipped just using Shining Silver.

After that I set about dirtying the ship. The streaks were achieved by first applying small dots of black oil paint to some of the chips I had painted earlier. I then dipped a brush in some white spirits and gently dragged out the oil paint into long streaks.

I repeated the process with a dark brown oil paint called Raw Umber, only to a smaller degree. Finally, for any streaks located on top of particularly dark areas (ie, the dark blue wings), I painted thin lines of diluted Earth in order to make the streaks more visible. 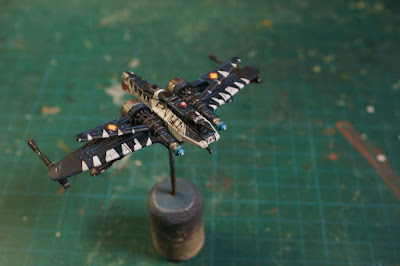 I painted the engine glow by first applying several thin glazes of AP Blue Tone Ink. I then switched to Magic Blue to increase the intensity of the glow. For the later stages I also mixed in some Matt white and the closer to the middle I got the more white I used. The last layer was almost pure Matt White.
Upplagd av Macross_VF1 kl. 16:48:00