I should have quite frankly uploaded this three months ago but I've been a lazy bugger. Anyway, here's how I re-purposed a bunch of  air speeders from a RISK board game into models fit for an X-wing battlefield.

Even before I accepted the commission I knew that I would be facing an interesting challenge. The models are made from a horrible type of glossy plastic that generally resists most types of glue. 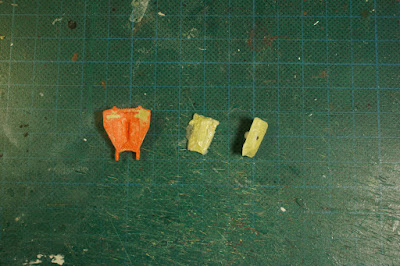 As you can see in the above photo, I tried a few methods which failed. Filling in the two 'wings/engines' with some milliput was pretty easy, as those recesses were quite deep and narrow, which gave the putty a decent amount of purchase on the plastic.

However the main recess was a bloody mess. As I had already expected, neither super glue nor plastic glue did jack shit. Pressing some milliput directly into the recess and using the model as a mold worked slightly better but that also popped right out when a small amount of force was applied. 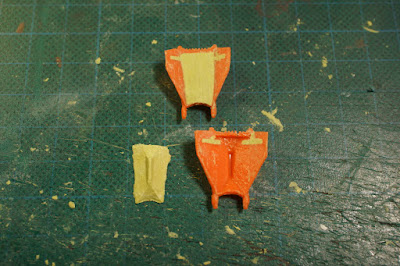 Still, this was something I could work with, provided I could find a better glue. After looking around for a bit I found a specialized super glue advertised as being able to bond to just about any plastic. I picked up one bottle for testing and this proved to be just the thing I needed!

So here's how I decided to do things. First I pressed some milliput into the smaller 'wing/engine' recesses. When that had hardened I removed any unnecessary waste and pressed a larger amount of milliput directly into the main recess. 24 hours later I gently pried the newly molded millput loose and cleaned it up. 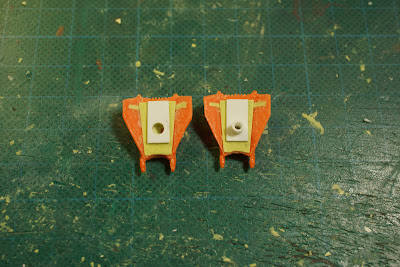 After cleaning, I immediately glued the piece back using the specialized glue. Since this was the first time I've ever used this type of glue I can't vouch for it's long term durability but it certainly seemed to hold up quite well to my abuse.

In order to add a mounting point I glued (using normal super glue this time) a small piece of 0.5 mm thick plasticard to the bottom of each ship. I did this for two reasons; I needed to strengthen the area around the mounting pin as milliput can be rather brittle. Secondly this also rather conveniently added some much needed detailing to the ship.

For the actual mounting pin I used a simple low-tech solution. To begin with I drilled a hole pretty much in the middle of each ship using a 3.2 mm drill. I then cut a short piece of 3.2 mm plasticard tubing and glued that into each hole. Finally, I drilled out the inside of each tube from 1.6 mm to 2 mm. 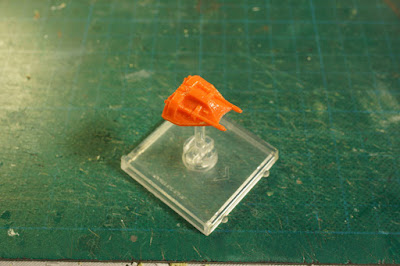 This makes it possible to mount the models on a standard X-wing small base using the official mounting pins. Sure, the ships can rotate as no stop has been built into the plasticard tube but the fit is quite snug and the plastic itself also tend to resist turning motions so you generally have to apply a decent amount of force in order to rotate the ship.

Should the tube become damaged or worn it should be pretty easy to replace it by drilling out the previous tube using another 3.2 mm drill and just putting a new one in place. Cheap and cheerful is the way to go!
Upplagd av Macross_VF1 kl. 21:19:00