As I promised, here is how I painted the Gamma Class Assault shuttle. 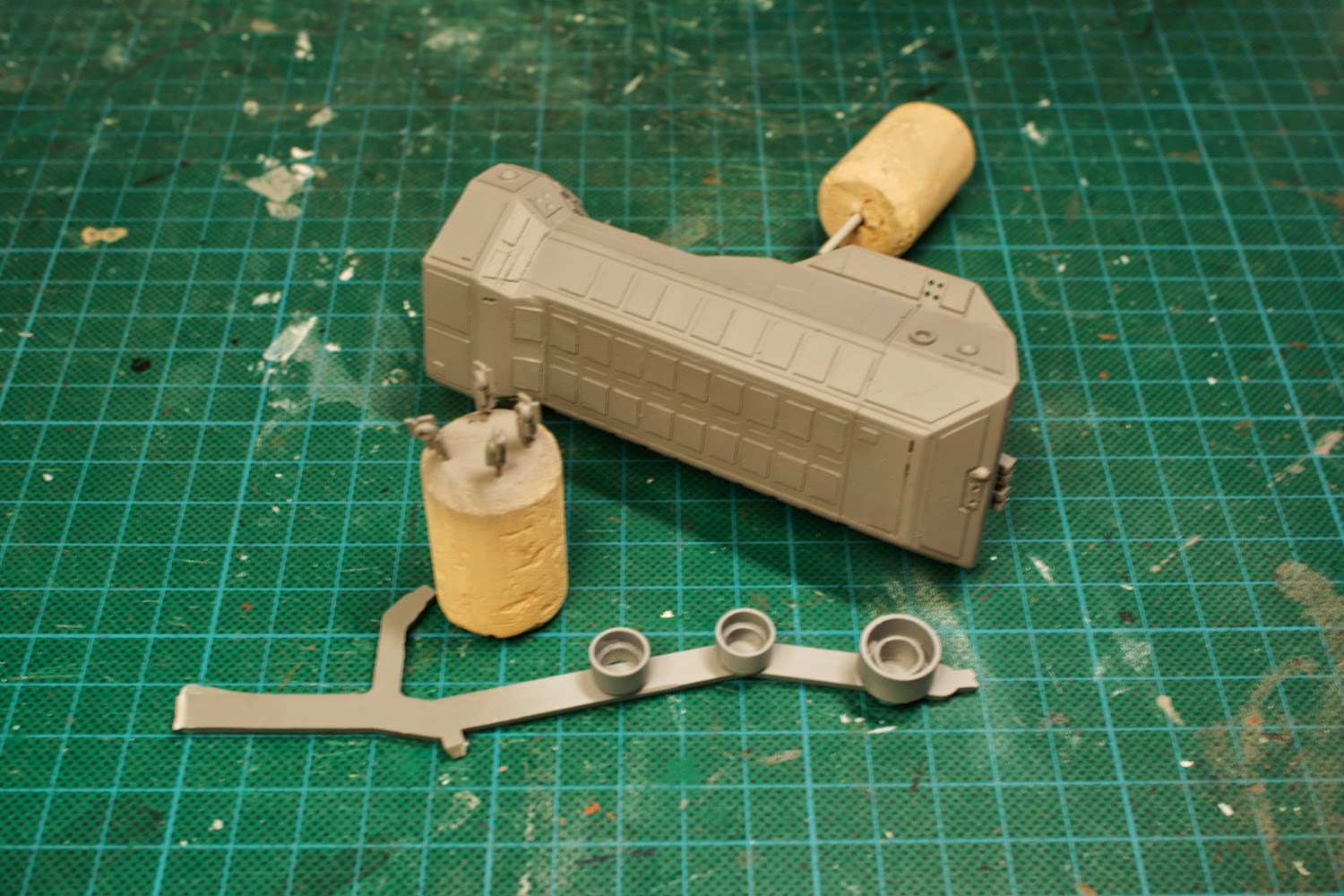 I decided from the very beginning to remove the engine exhausts and separate from the main model to make everything easier to paint (in some of the build pictures you can see them on the model but they were only lightly glued into placed for this specific purpose). Primer in the form of Vallejo USN Ghost Grey went on first, followed by a base coat of Vallejo Cold Grey. I didn't base coat the exhausts with Cold Grey, instead I basecoated them later with Vallejo German Grey. 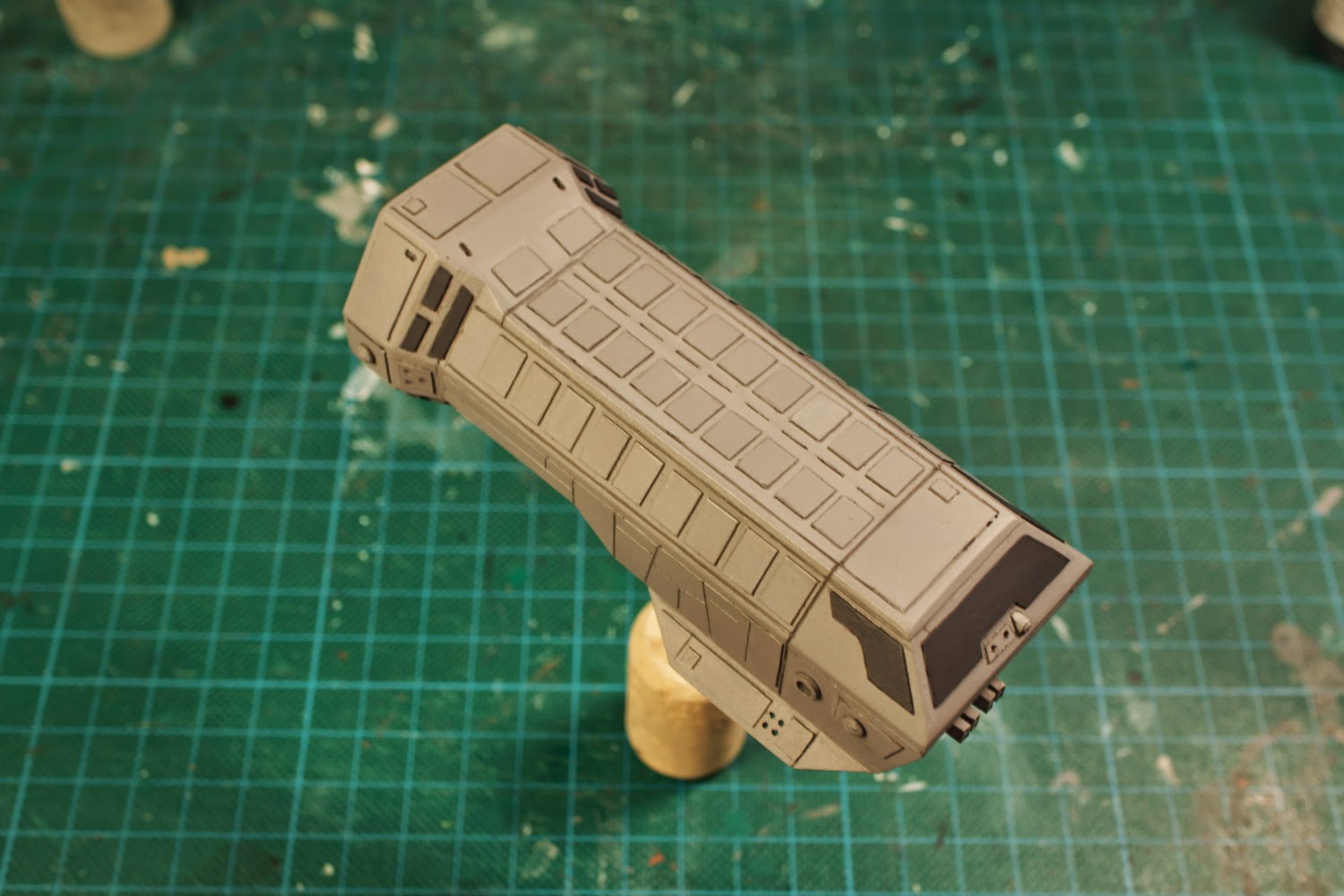 I shaded everything with Army Painter Dark Tone ink, but I didn't slather the ink all over the model this time. Instead I carefully painted the ink into every recess manually and later went back and cleaned up any mistake using thinned out basecoat colour. Doing it this way often saves time in the overall painting process, as the clean up process is far quicker. The windows and the strips of armor behind the top hatches got a coat of German Grey 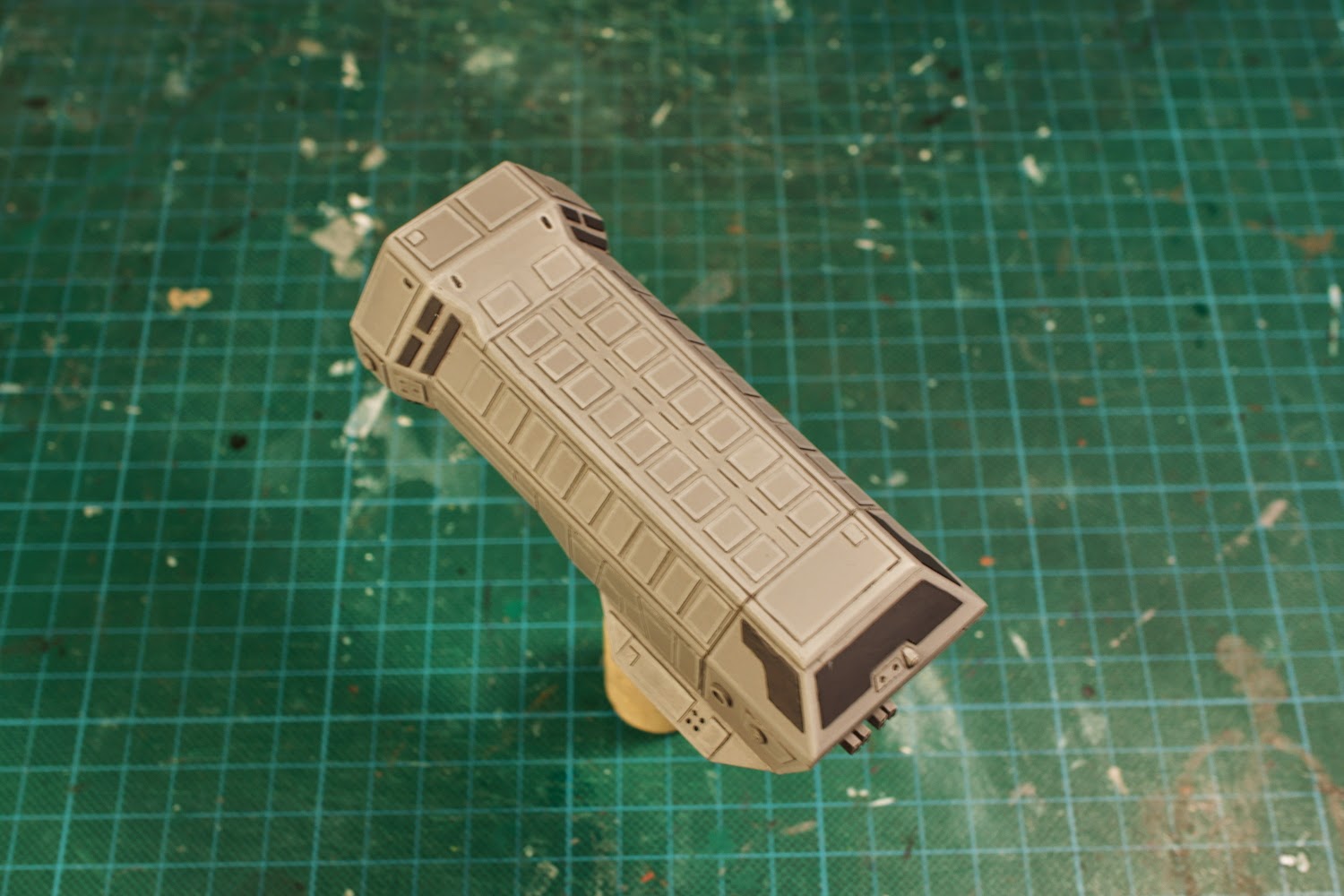 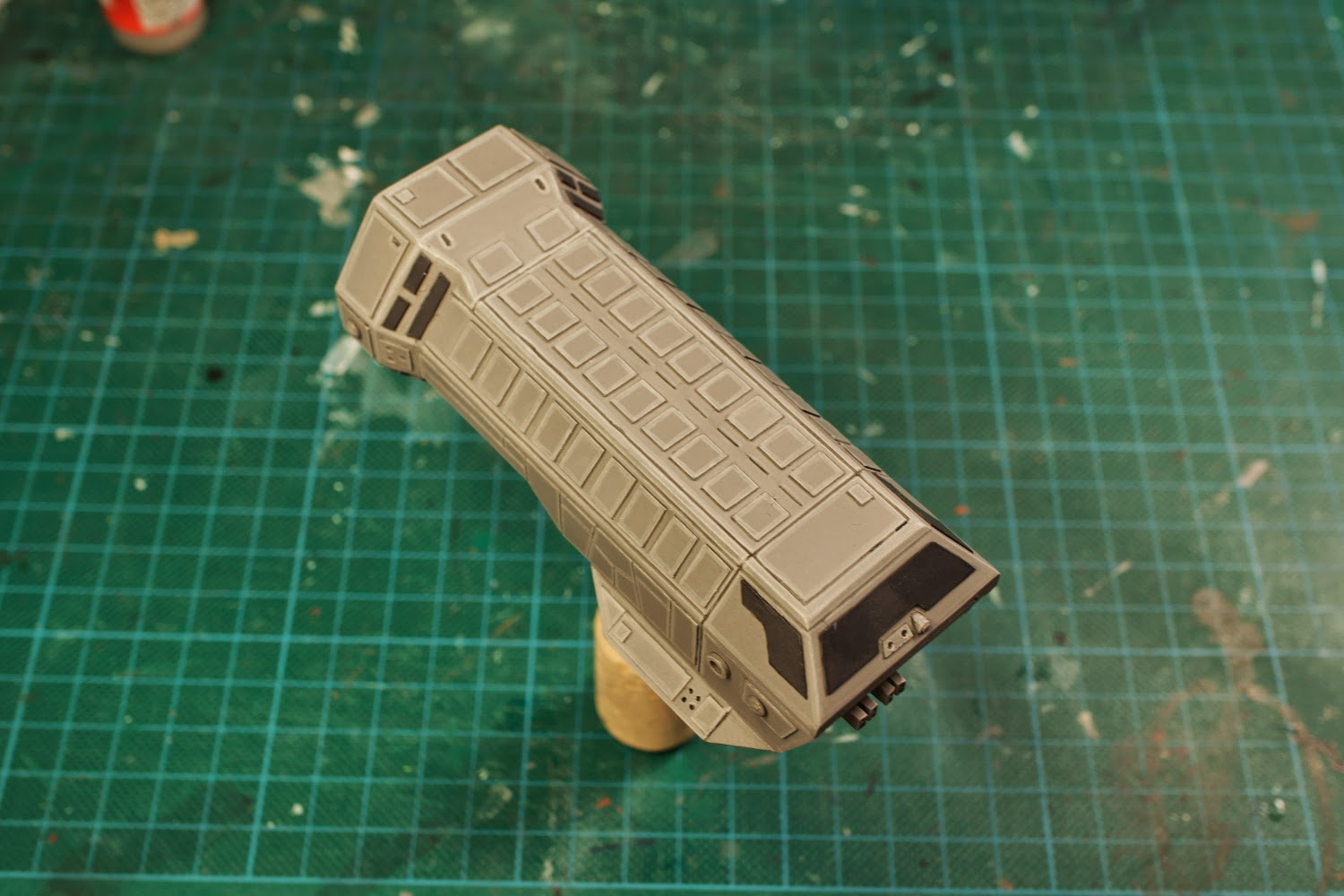 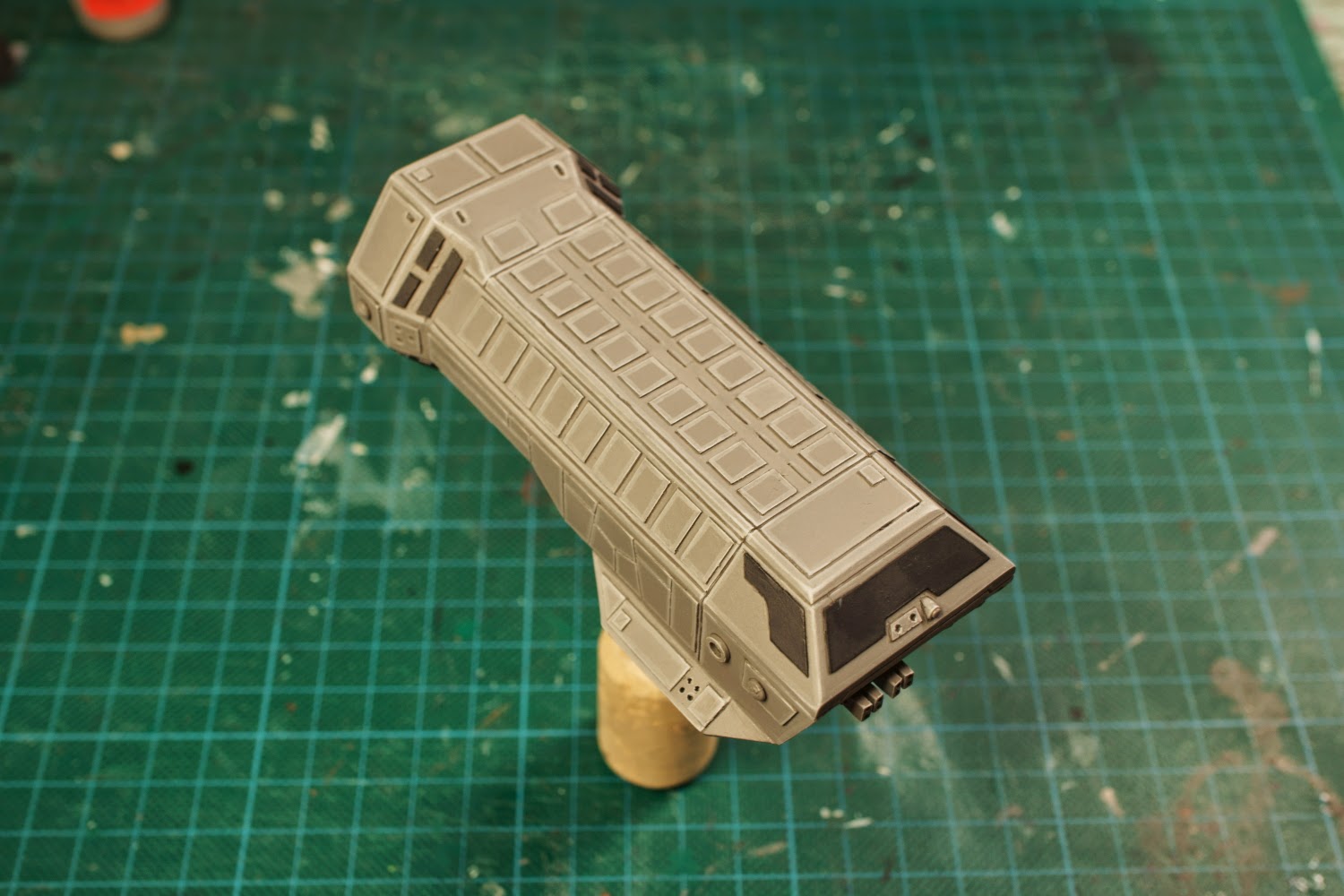 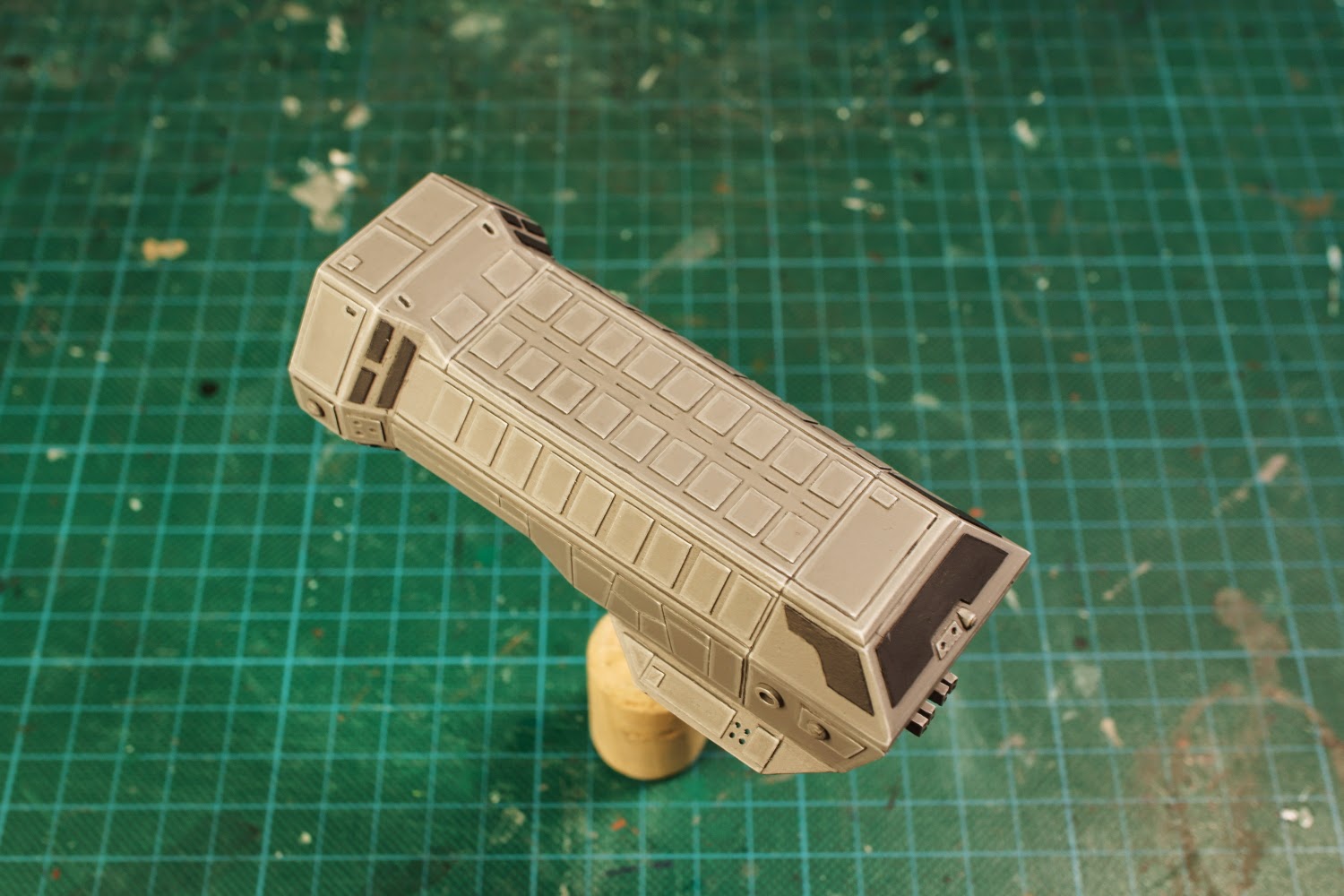 The first highlight was a 2:1 mix of Cold Grey and Vallejo Stonewall Grey that was painted on every edge as a fairly broad line. Second highlight was the same colours but the ratio changed to 1:2 and was applied much more thinly to every edge. Third highlight was pure Stonewall Grey and was really only painted to the front of any edge as that was where I imagined the light was coming from. Fourth and final highlight was Vallejo Dead White, and it was almost only applied as small dots to the most prominent edges and corners. At this stage I also painted some thinned out Cold Grey onto the first highlight in an effort to make the transition smoother. 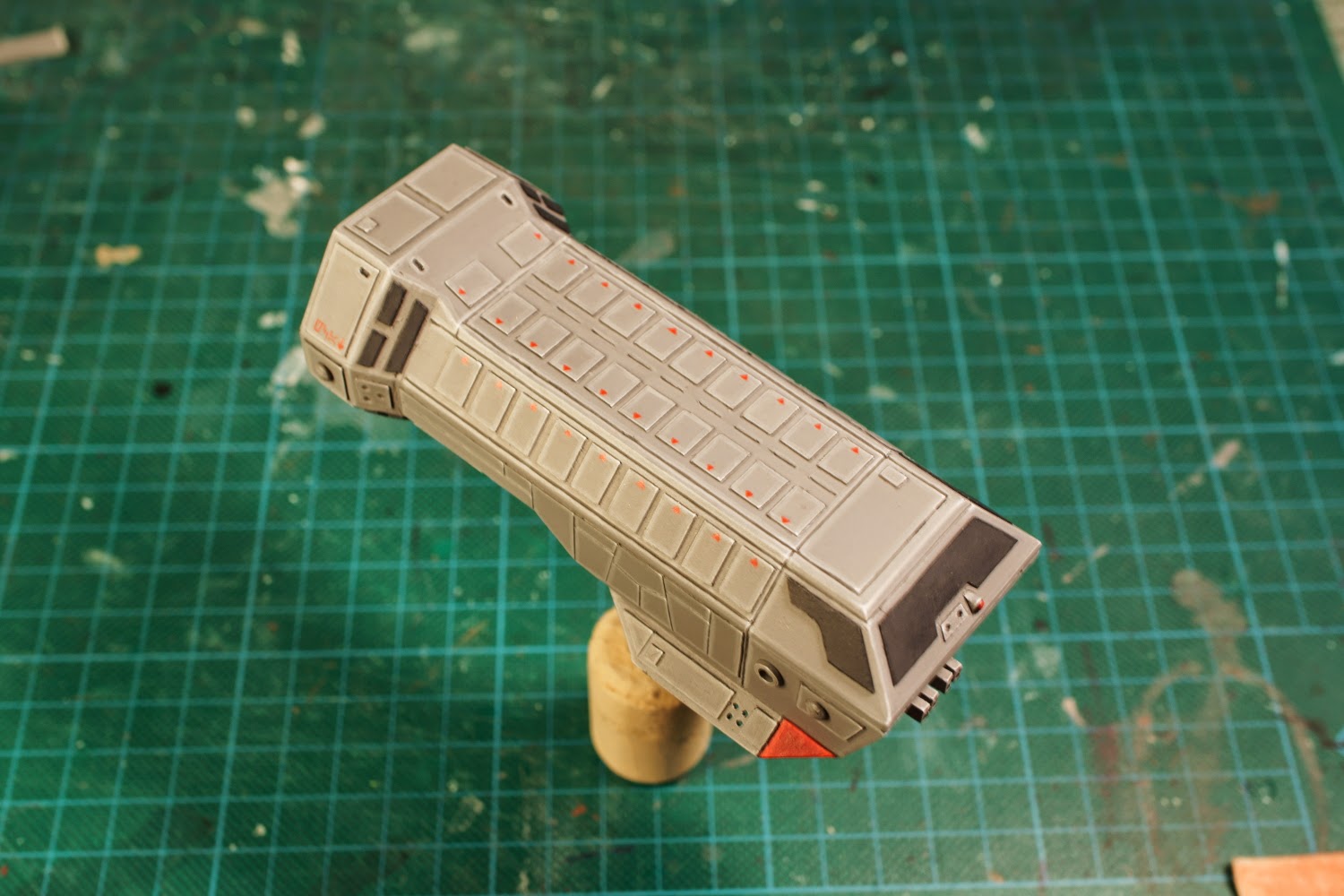 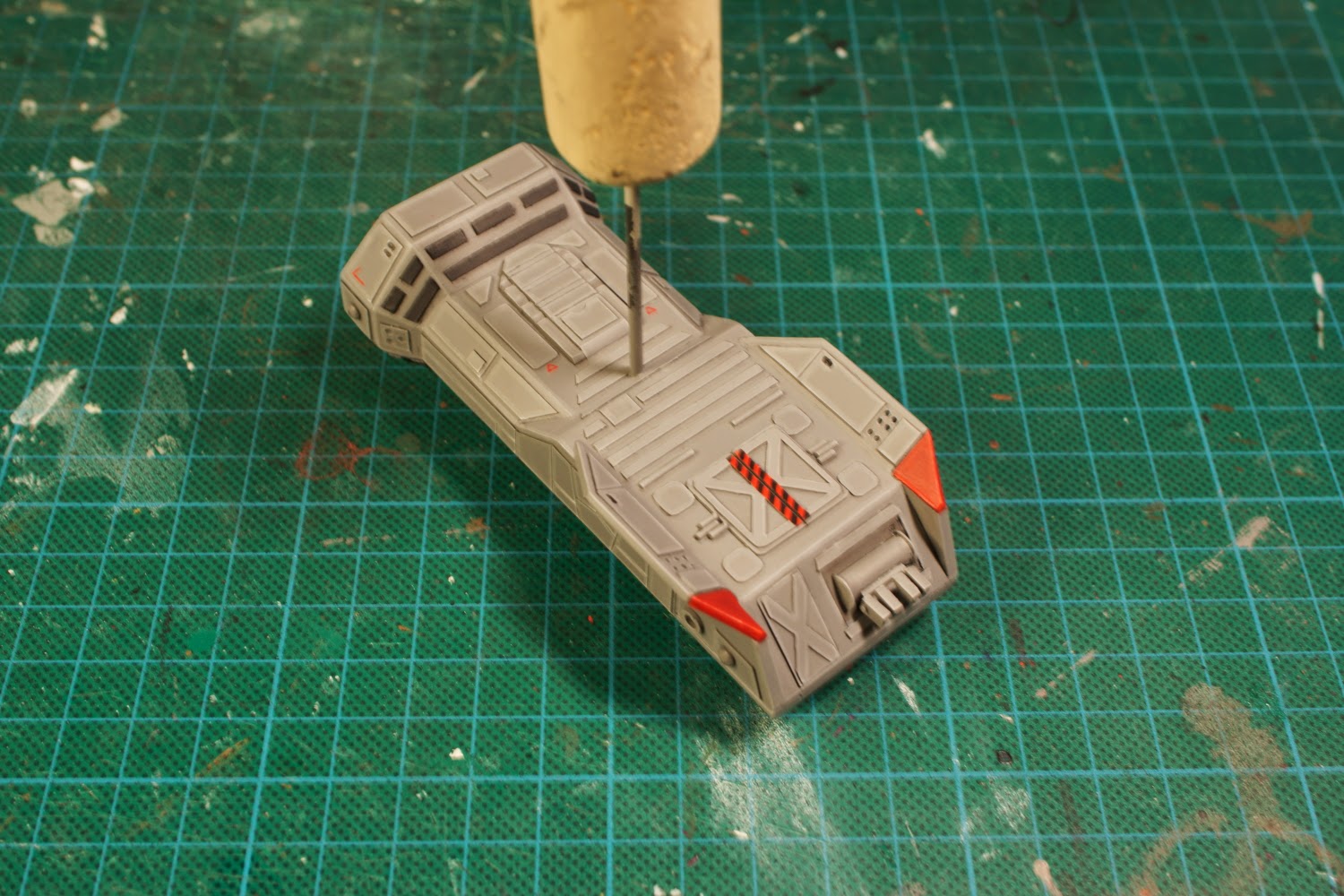 To give the model at least some life I painted the front of each 'chin' wing with Vallejo Scarlett Red which I highlighted first with Vallejo Bloody Red and finally Vallejo Hot Orange. To further improve the looks I added a multitude of red markings all over the model. I even went as far as painting the name of the model, GCAT, in AureBesh letters (Star Wars alphabet) though that proved to be a mistake. The abbreviation should be GCAS, as in Shuttle, not Transport. *Facepalms*. On the other hand, small red triangles has been officially added to the book of grudges, right behind rivets. 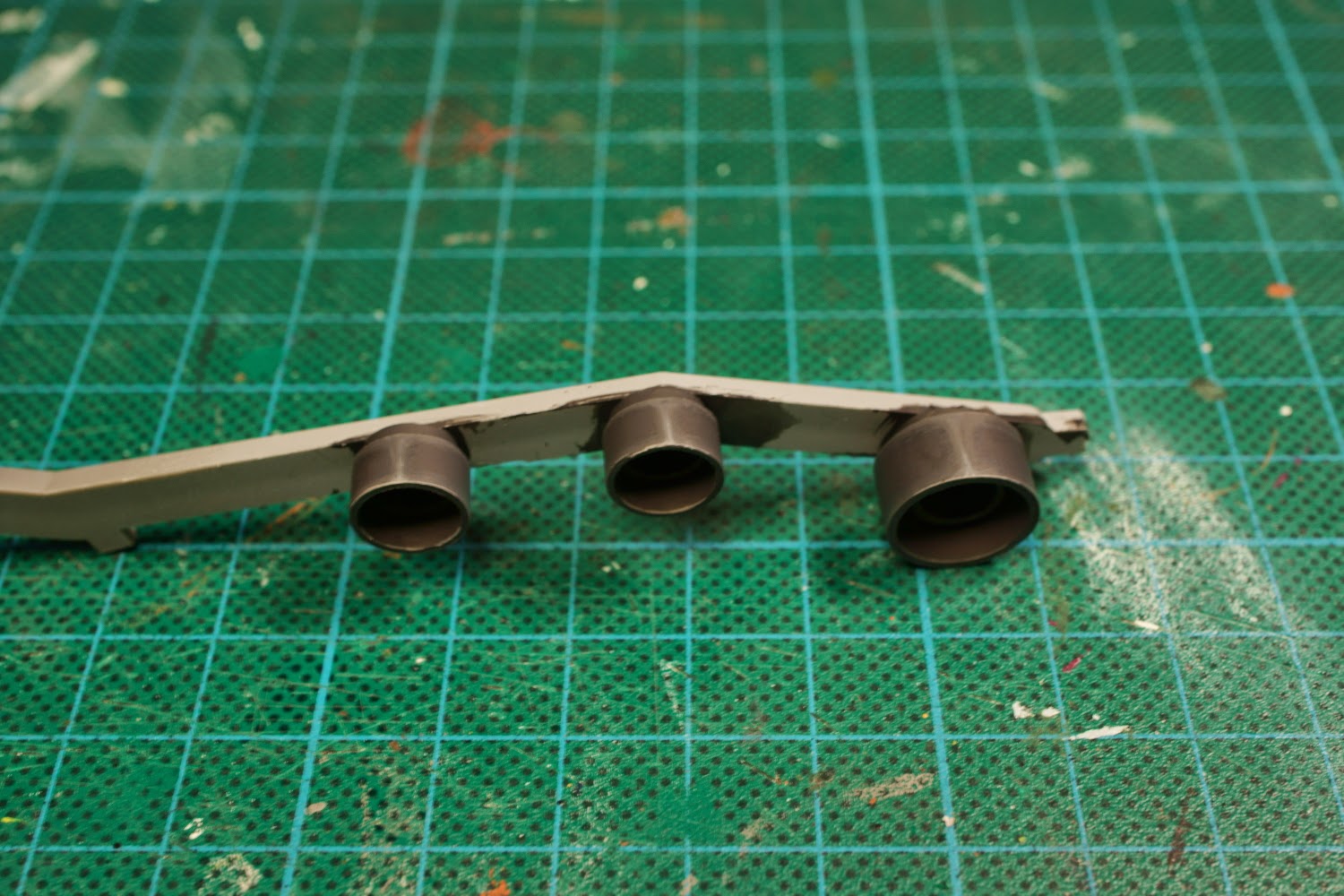 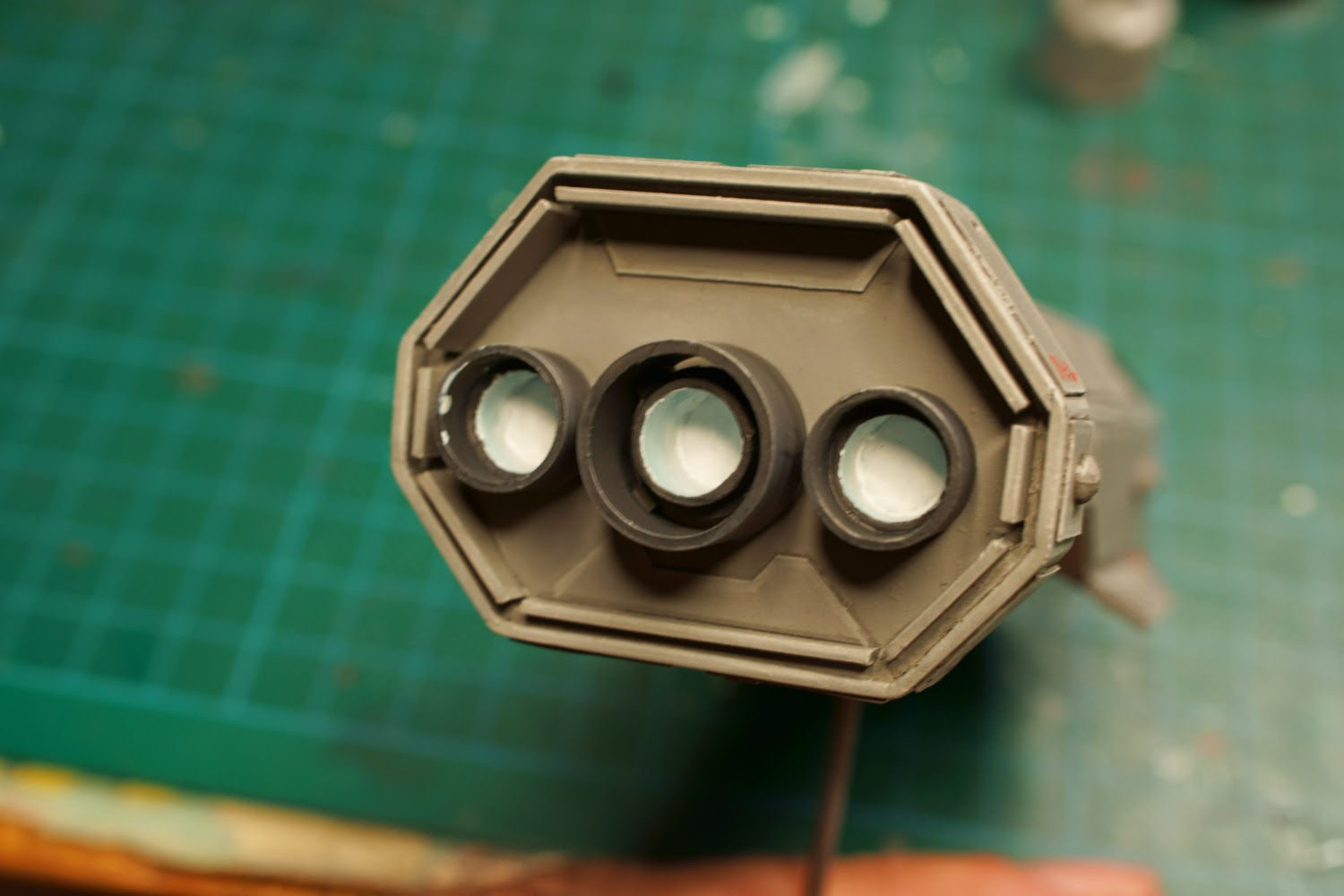 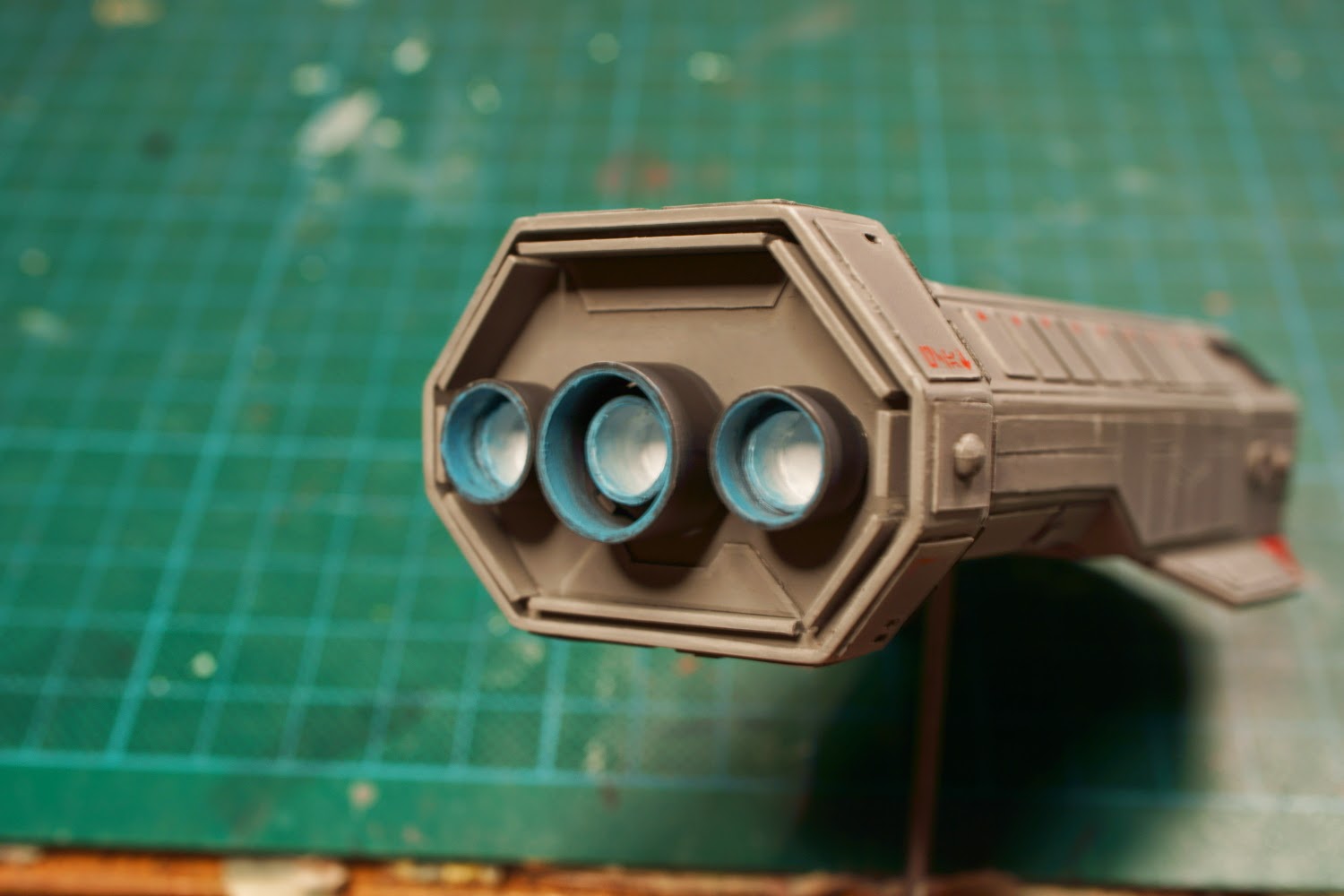 The exhausts was highlighted with increasing brighter mixes of grey (German Grey with Cold Grey mixed in) and I tried to give them a slight reflection on the top. Didn't come out quite as I wanted it as I must have rushed the process, but it will do. It's worth mentioning that when I painted the engines I used some of the leftover mixes to highlight the armour strips and the windows as well.

After gluing the exhausts into place I carefully painted the middle with Dead White and started building up a blue glow using Vallejo Wolf Grey. Towards the end I mixed in some old GW Enchanted blue as well. This is the second time I try this and all things considered I suppose it's fairly decent effort. Damn if it isn't difficult though. 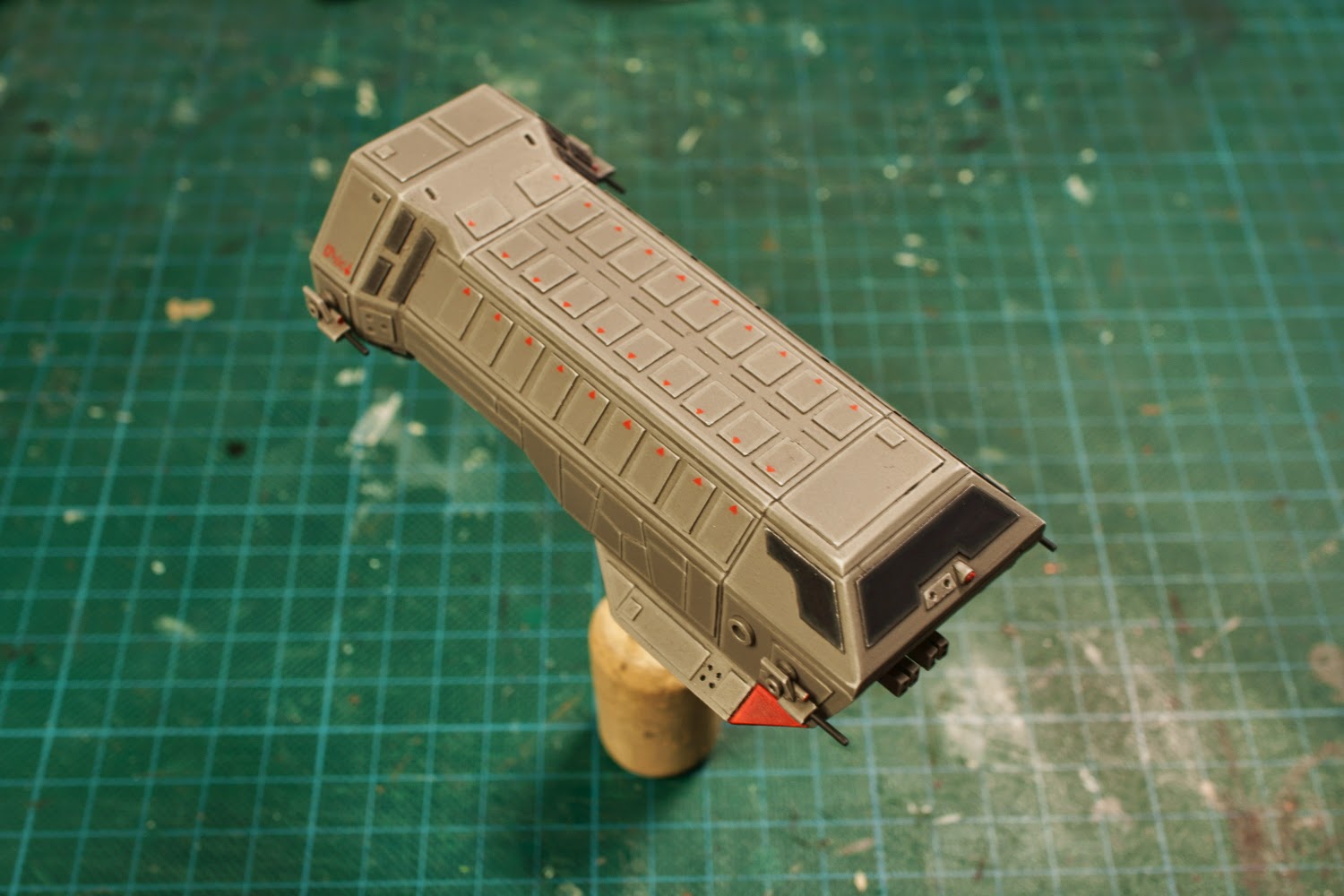 After gluing the guns in place (painted in the same way as the ship), I varnished the ship and finally painted the windows with gloss varnish. Ironically I can't use this ship yet. While I'm considering using it as a proxy for perhaps the Lambda Shuttle, I do not actually own any big ships yet. So no stands, bases, rules, anything. Gotta fix that I suppose.

On a more important note, I've learned some important lessons and are considering building another Star Wars ship. I'm leaning towards a Delta-Class JV-7 Escort shuttle but with the bewildering array of ships available in Star Wars, who knows what I might come up with.