Over three weeks since I last posted anything? Where does the time go? Into a black hole with infinite gravity? No matter, I've been busy lately painting my scratch built YG-4210. I knew right from the start that it had to look worn and rusty, as according to the Wookiepedia it's a very old design. 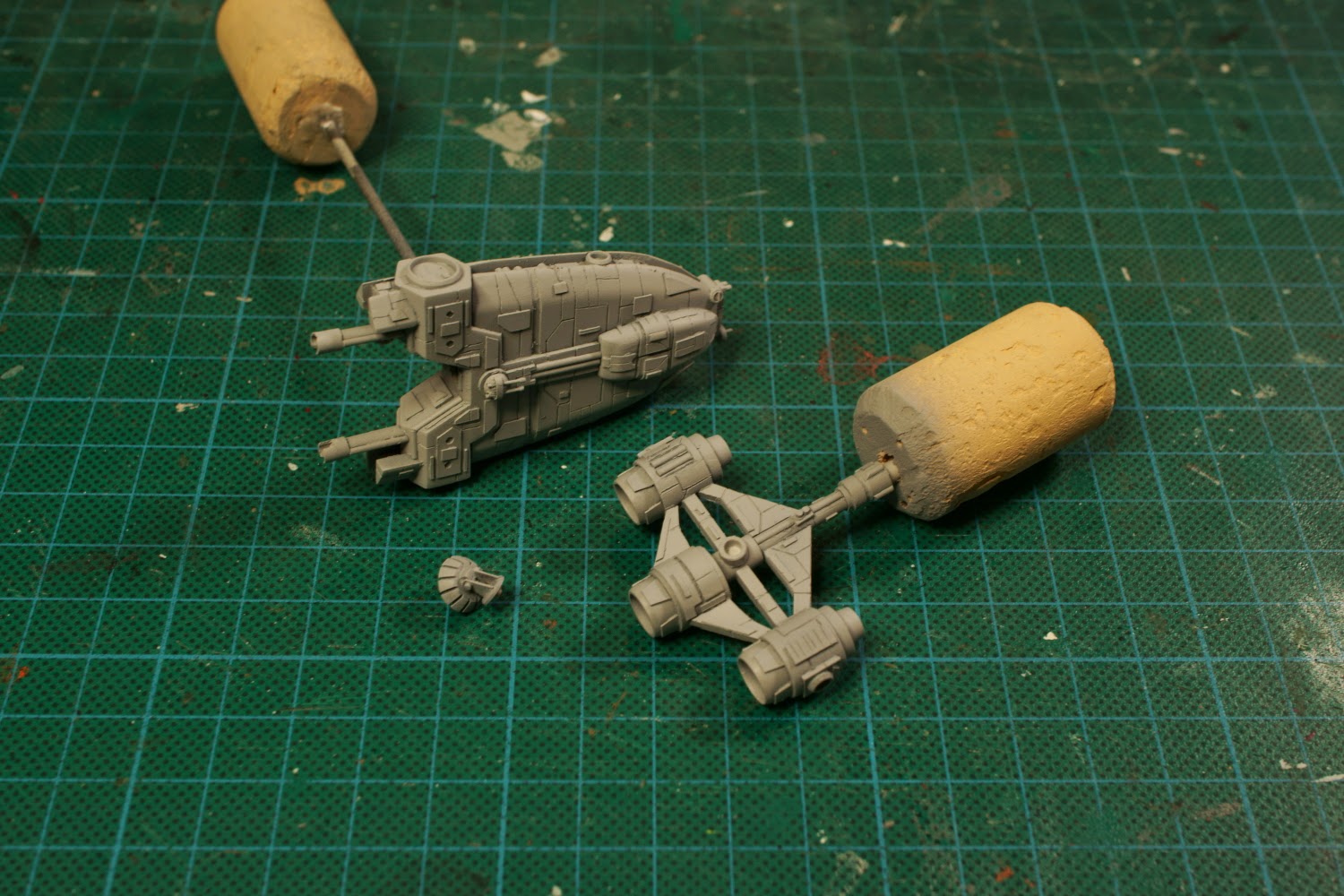 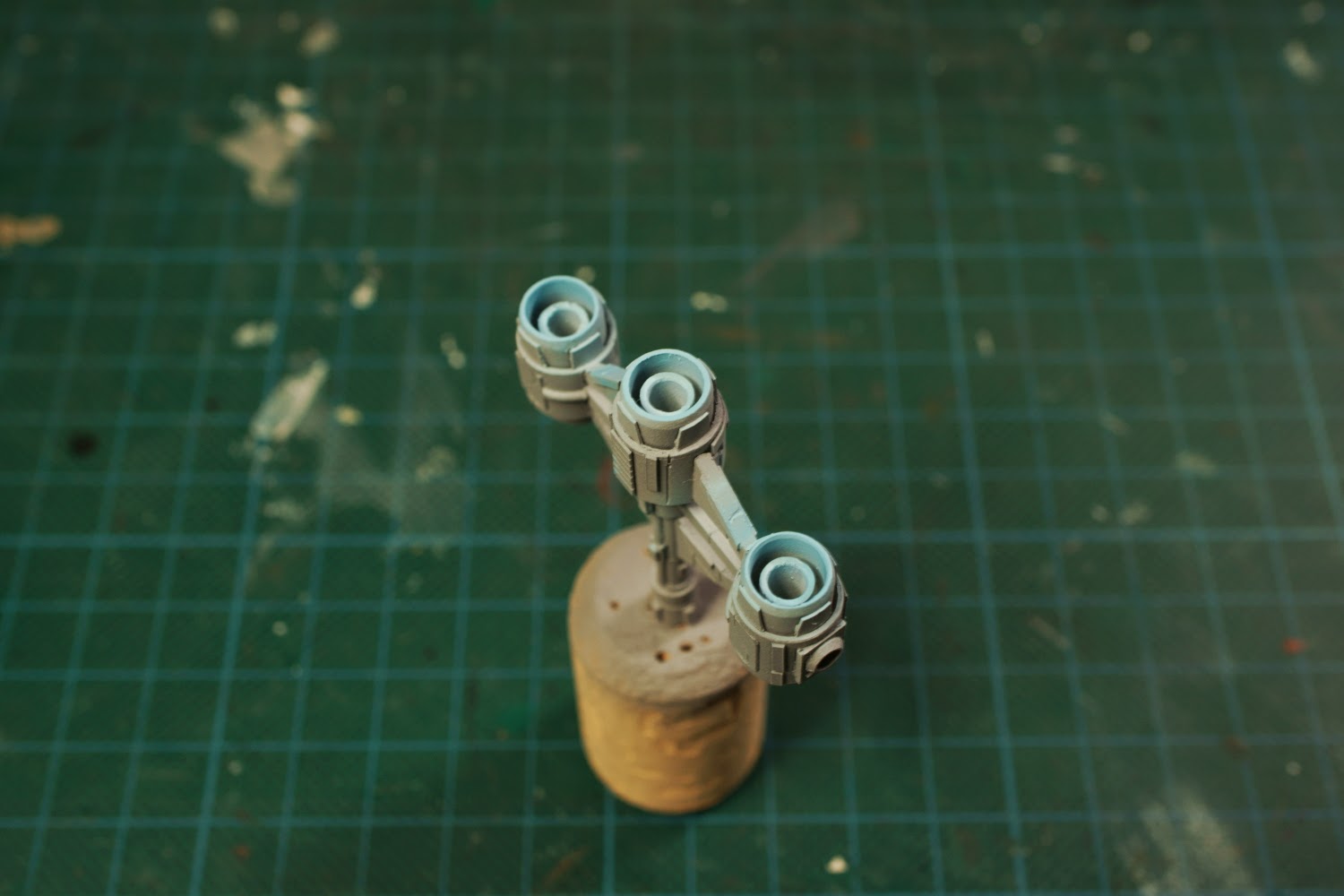 First came the primer in the form of Vallejo USN Light Ghost Grey (still the only grey primer I've got) and next I tried airbrushing the engine glow. It was best to do this right at the start as any overspray would later be covered by the base coat. The glow was slowly built up by using Vallejo Dead White and some old GW Enchanted Blue gradually mixed in. Overall I'm happy with the result though I realize I need to get a better airbrush. The one I have just isn't giving me the precision I want any longer. 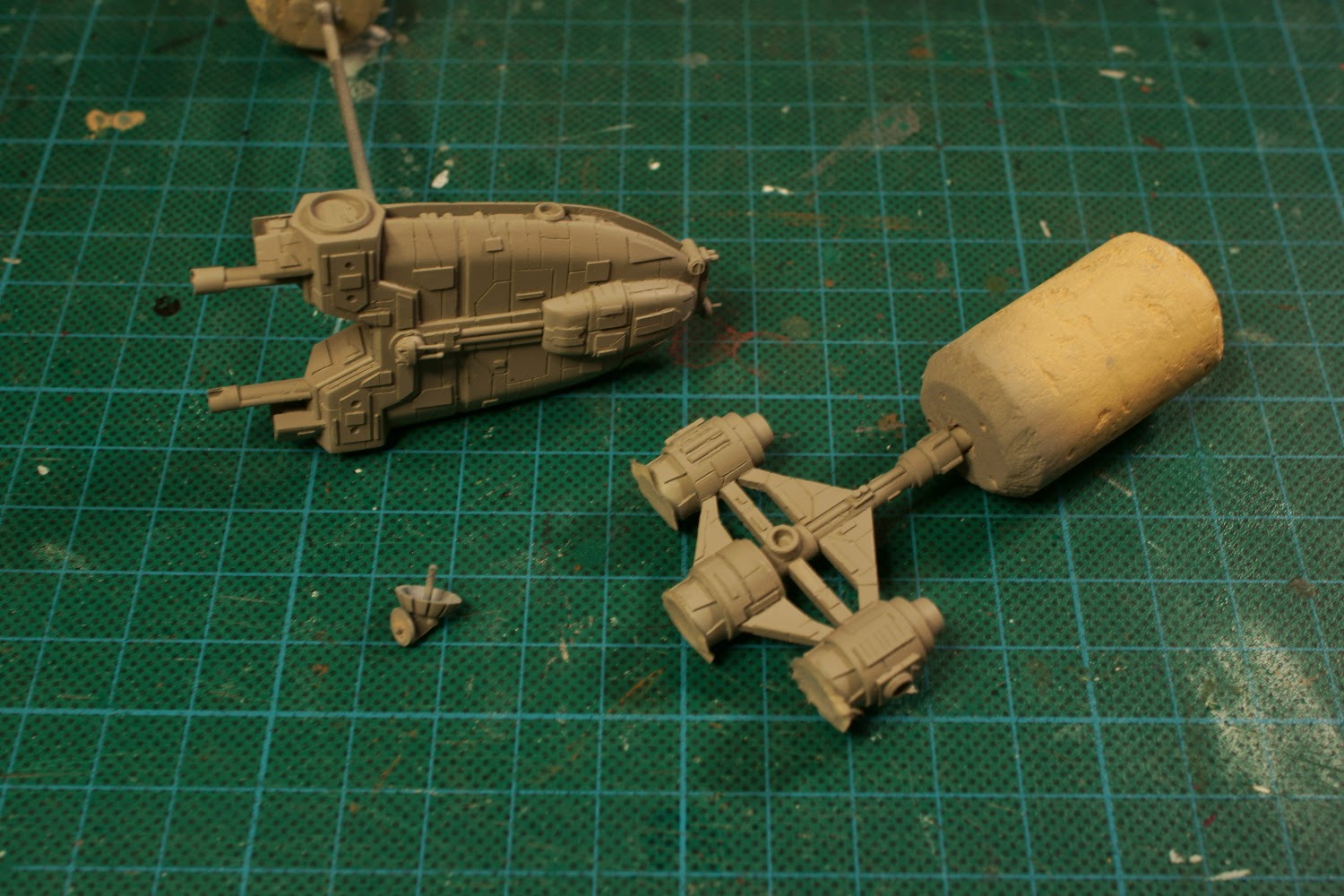 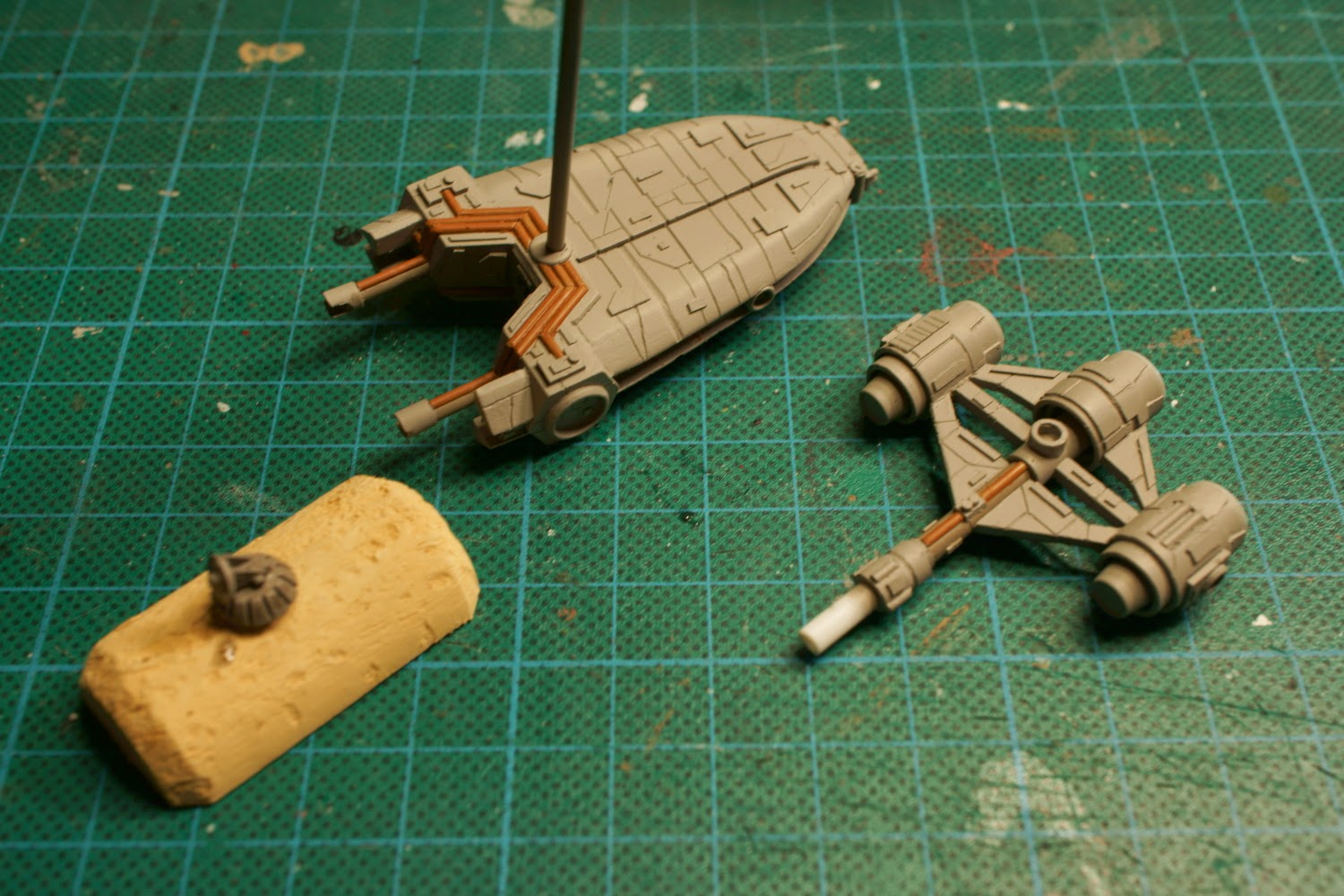 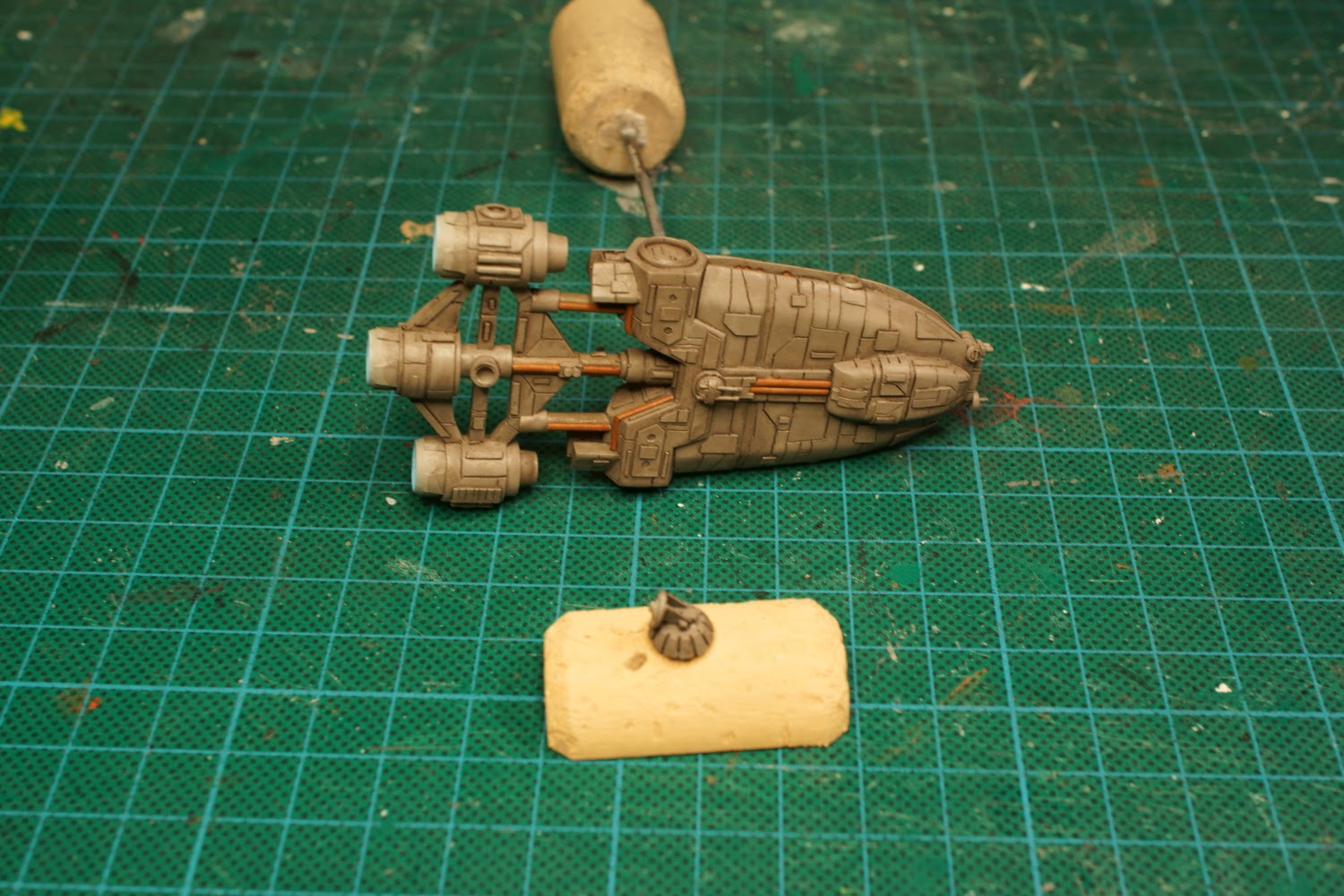 I carefully covered the engines with some masking tape before applying a 1:1:1 mix of Vallejo Khaki, Stonewall Grey and Cold Grey. When the base coat was dry I picked our every 'pipe' with Vallejo Beasty Brown. After that I washed the ship with a 1:2 mix of Army Painter Strong Tone ink and Dark Tone ink, taking great care in ensuring that the paint didn't pool unevenly. 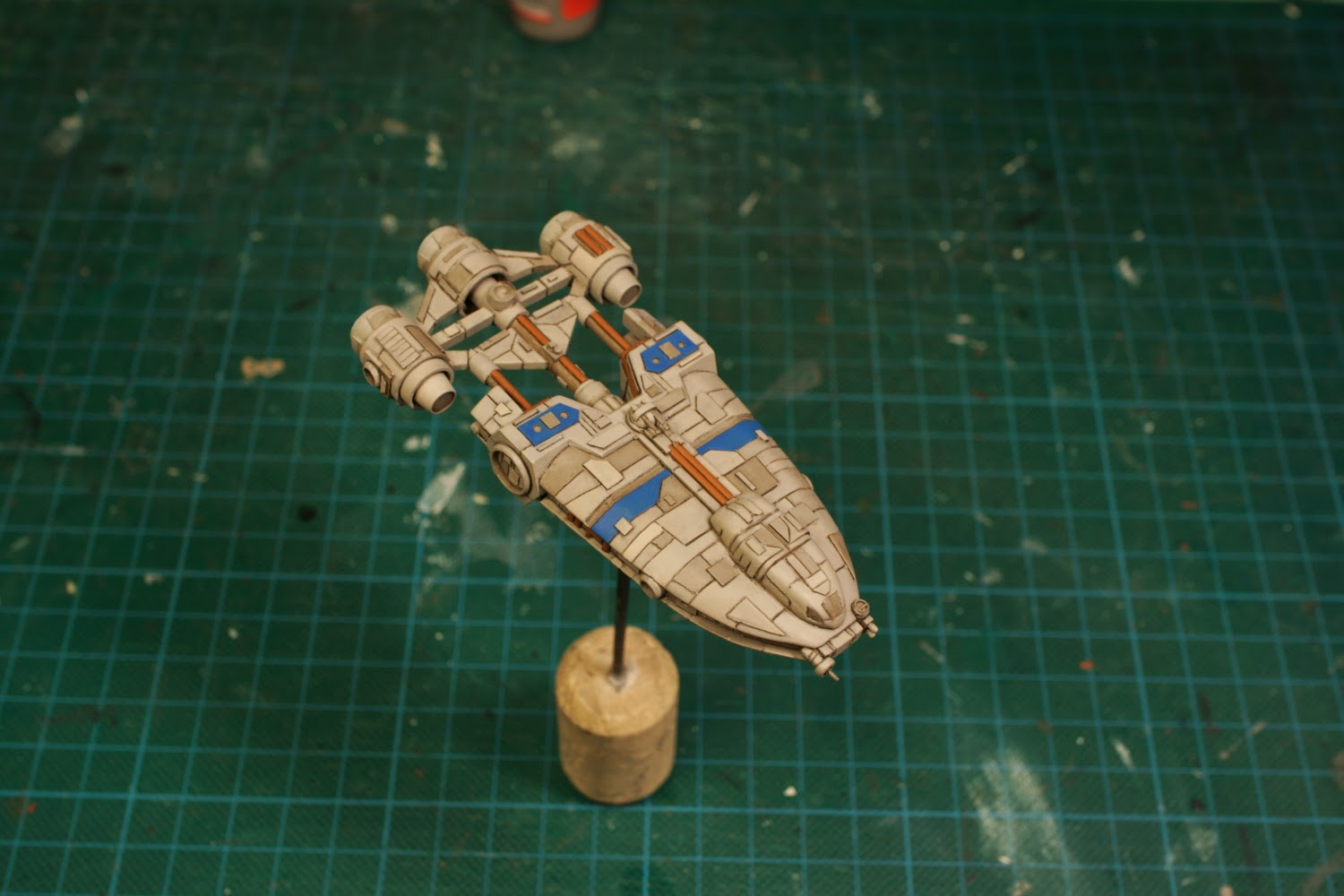 After the wash had dried properly I reapplied the base colour to most of the panels. As the paint I was using was quite thin I could vary the colour of some panels just by applying more or less coats. Some got other mixes of grey and some I even left entirely untouched. This was done to give a sense of varying levels of age and repair. To give the model some extra colour I also picked out a few panels with a 1:1 mix of Enchanted Blue and Vallejo Ultramarine Blue. 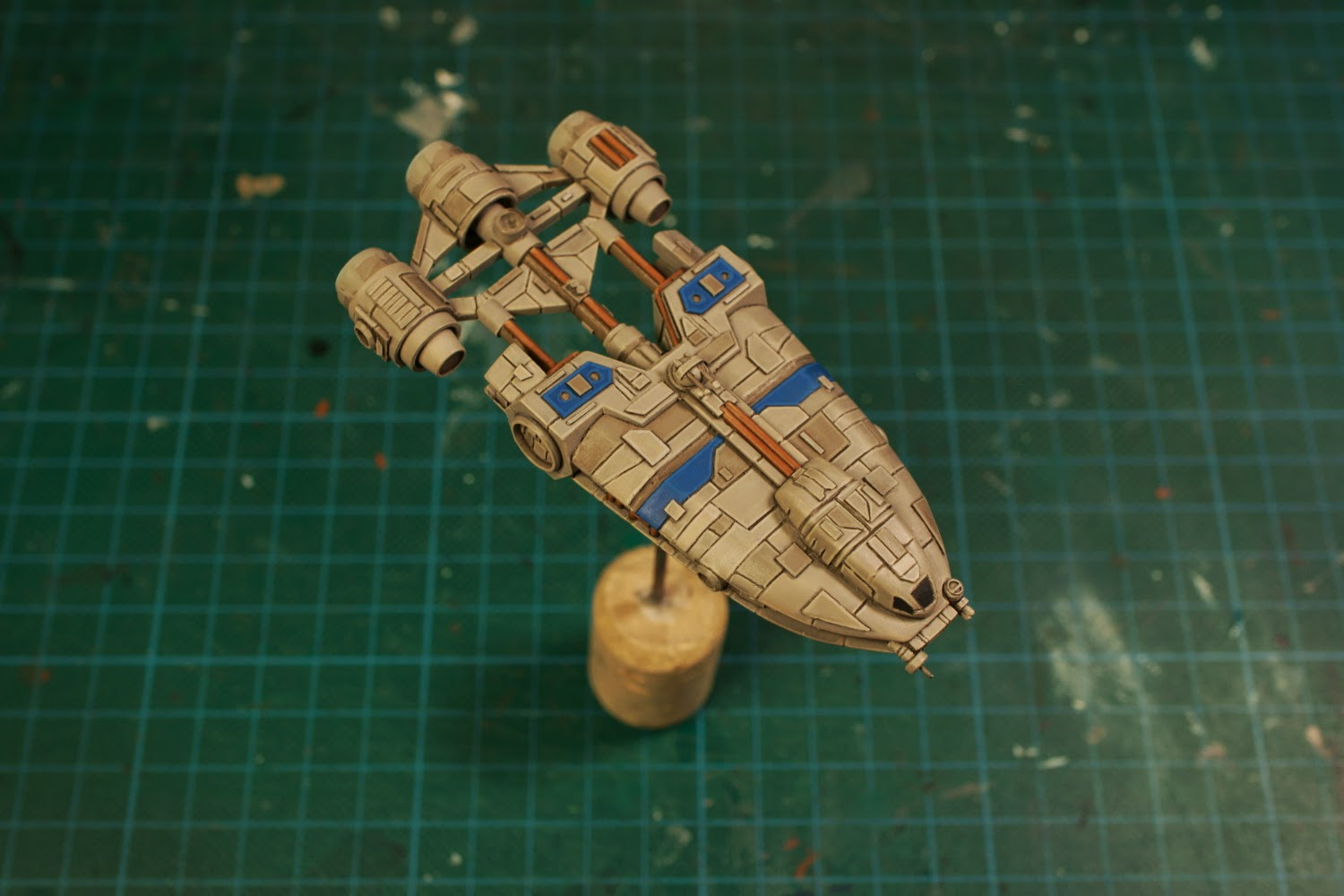 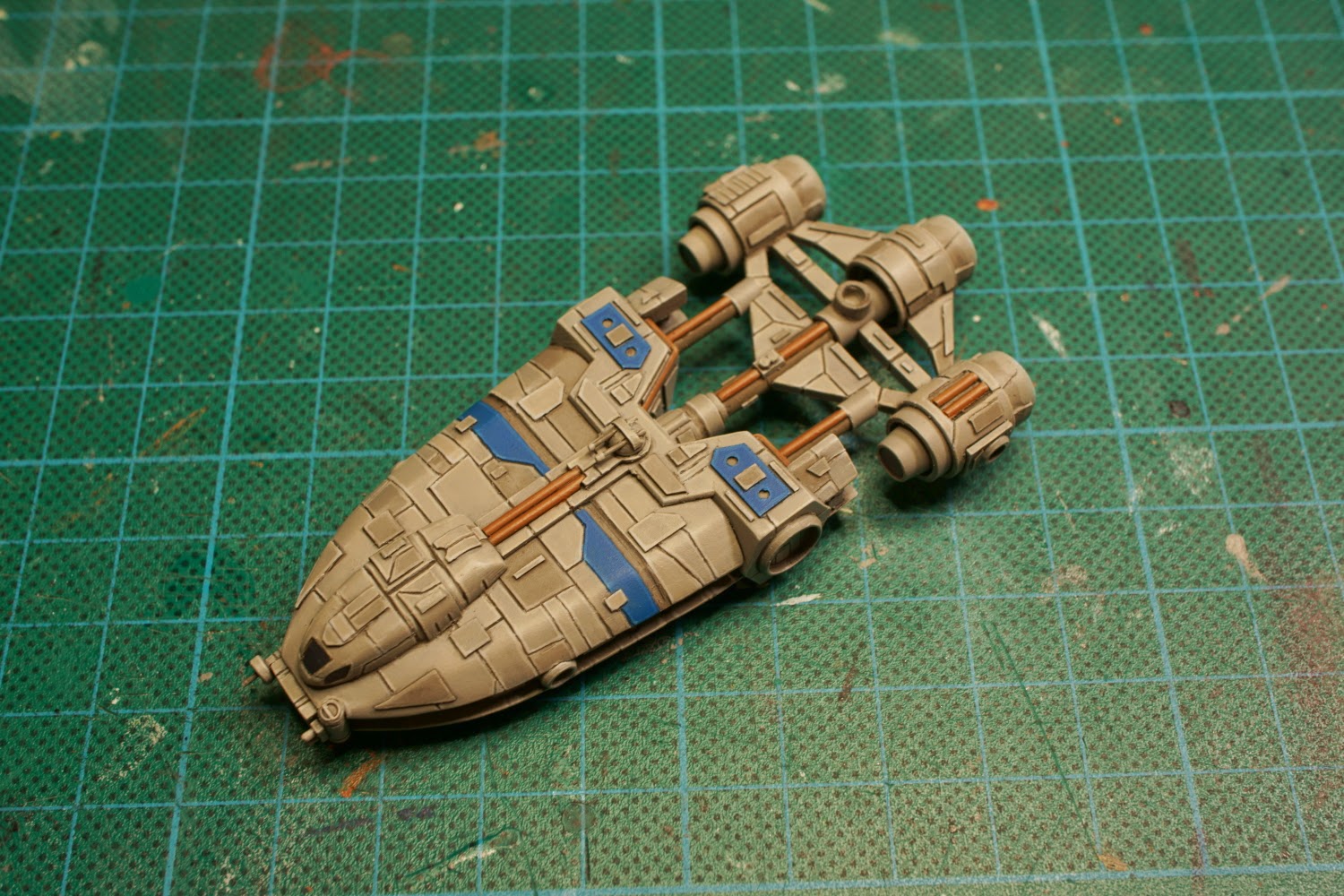 The highlighting stage was not as complex as usual, but rather subtle, again in an effort to achieve a sense of age. The blue was highlighted with the basic mix plus some Stonewall Grey mixed in, the 'pipes' used Beasty brown with some added Khaki and the panels used brighter versions of the basecoat (more Khaki and Stonewall Grey usually). The second and especially the third highlight was so small that it can actually be hard to spot the areas painted. 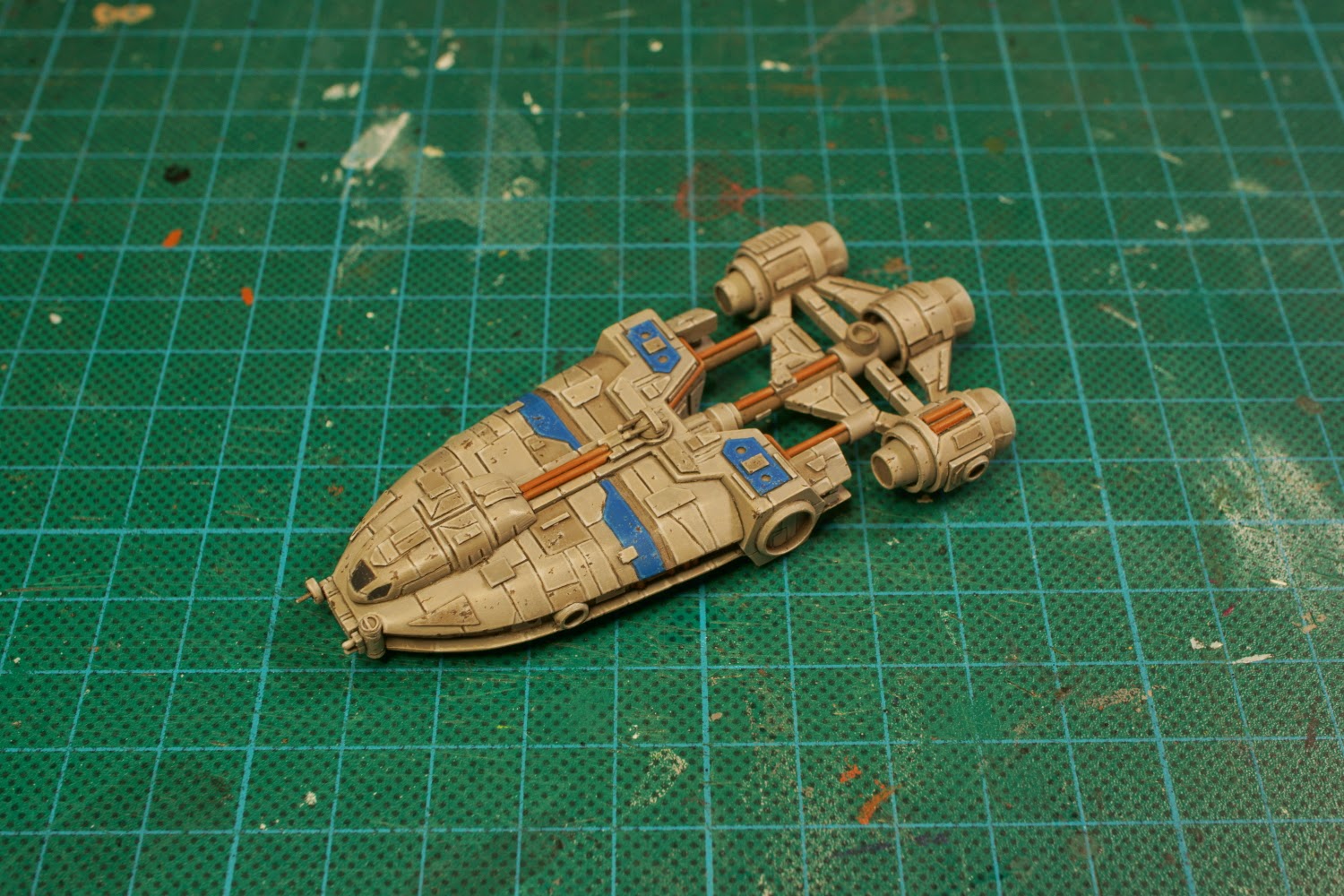 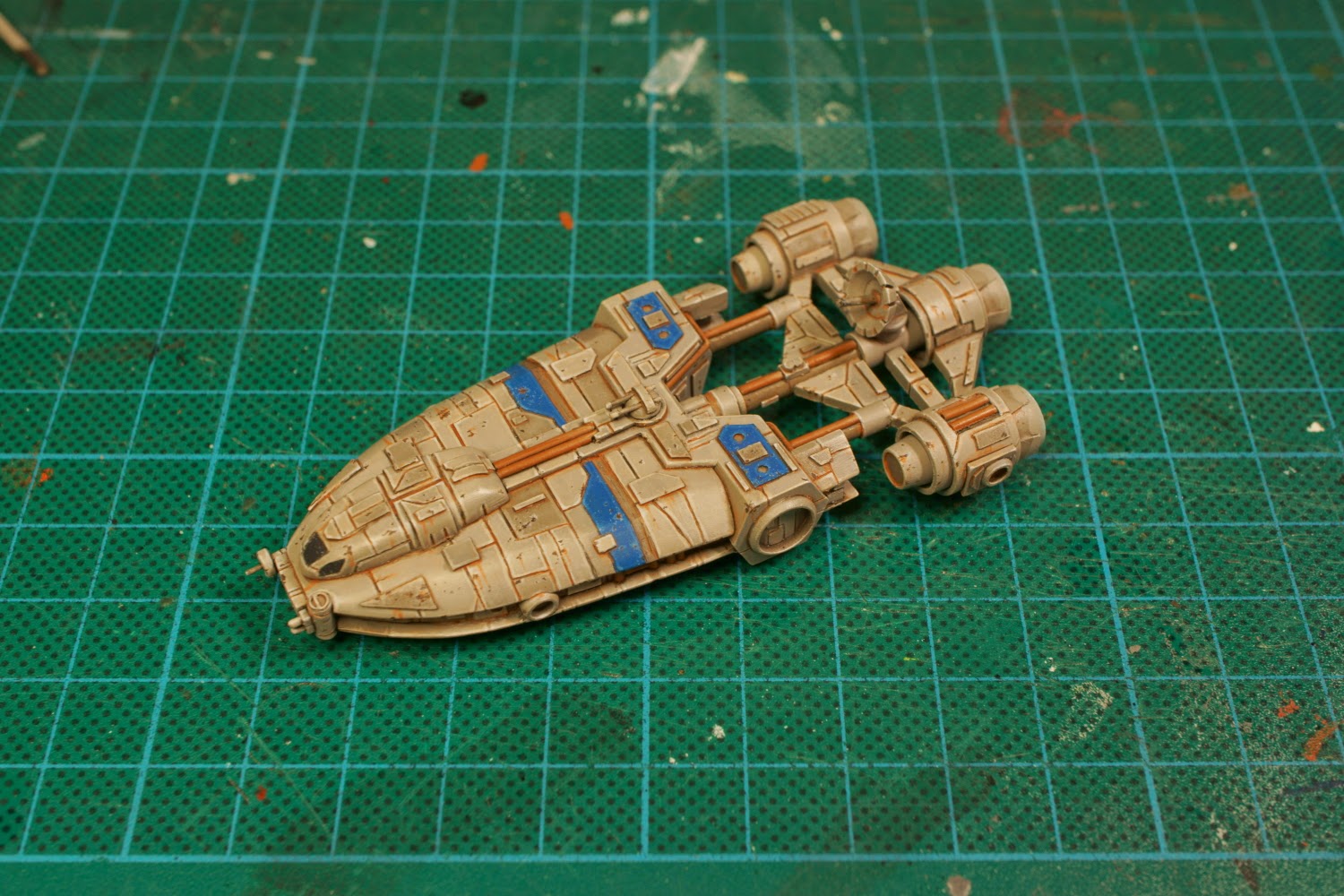 Trying to paint everything in subtle manner did come back and bite me in the arse though. When doing sponge chipping, the mix of colours (a brighter version of the basecoat) was apparently not quite bright enough and was hard to see when dry. Still, there was no other way but forward so I mixed up a 1:1:2 batch of Vallejo Terracotta, Parasite Brown and German Grey and carefully painted  it into several of the chips. This was to give a sense of older and deeper chips and scratches that had  began to rust.
For the actual rust I started with heavily thinned out Parasite Brown and applied it directly into most recesses and panel lines as well as directly on top of some chips. I also added some streaks of rust to some panels and chips. To add a little depth and variety I also painted some Terracotta into the deepest recesses.
I didn't try to make the 'pipes' rusty however. Partly because it wouldn't be very visible with Parasite Brown on top of Beasty Brown, but mostly because I imagined the pipes to be made out of a material that doesn't rust. Instead I intended to build up some grime around them but then I realized that I was running out of room for details and any grime wouldn't be very visible so I left them alone. 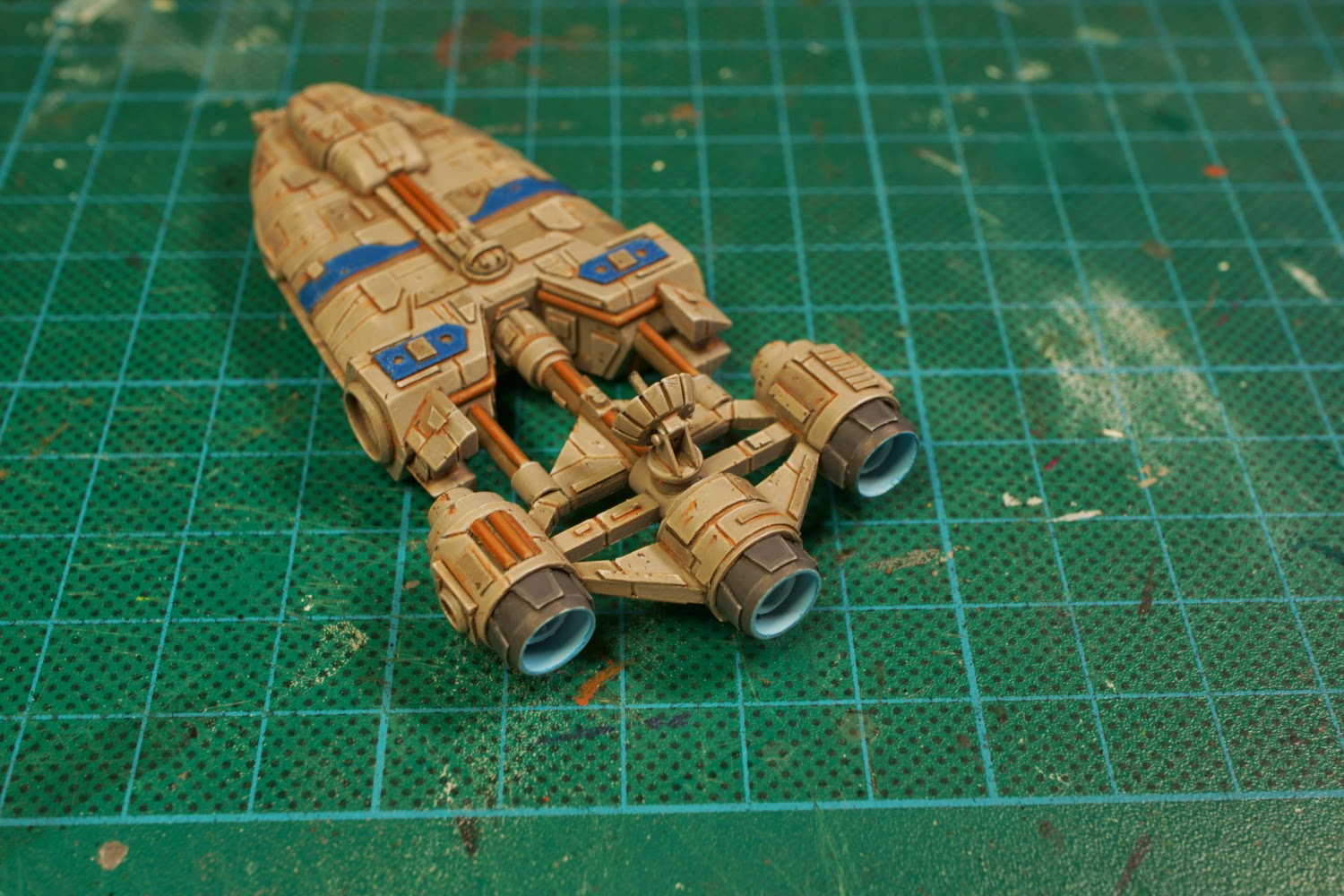 Since the engines would be a different colour compared to the hull I left them for last. They were simply painted with 1:1 mix of Cold Grey and German Grey, shaded with Dark Tone ink and lightly highlighted with Cold Grey and Stonewall Grey. The challenge here was to not touch the inside of the engines with the brush, something I just had to fail. Damn you shaky hands! Oh well it was easy to fix. 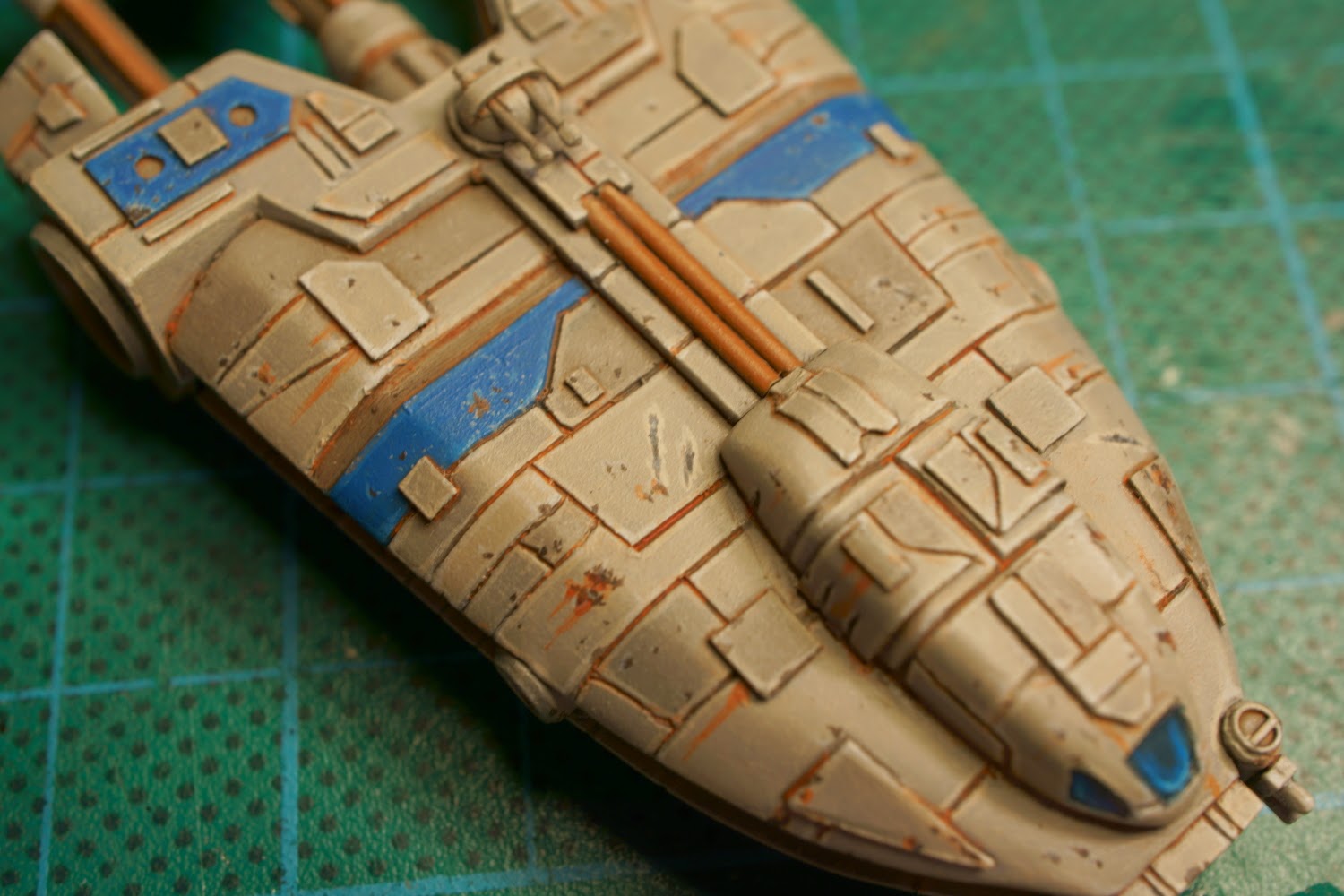 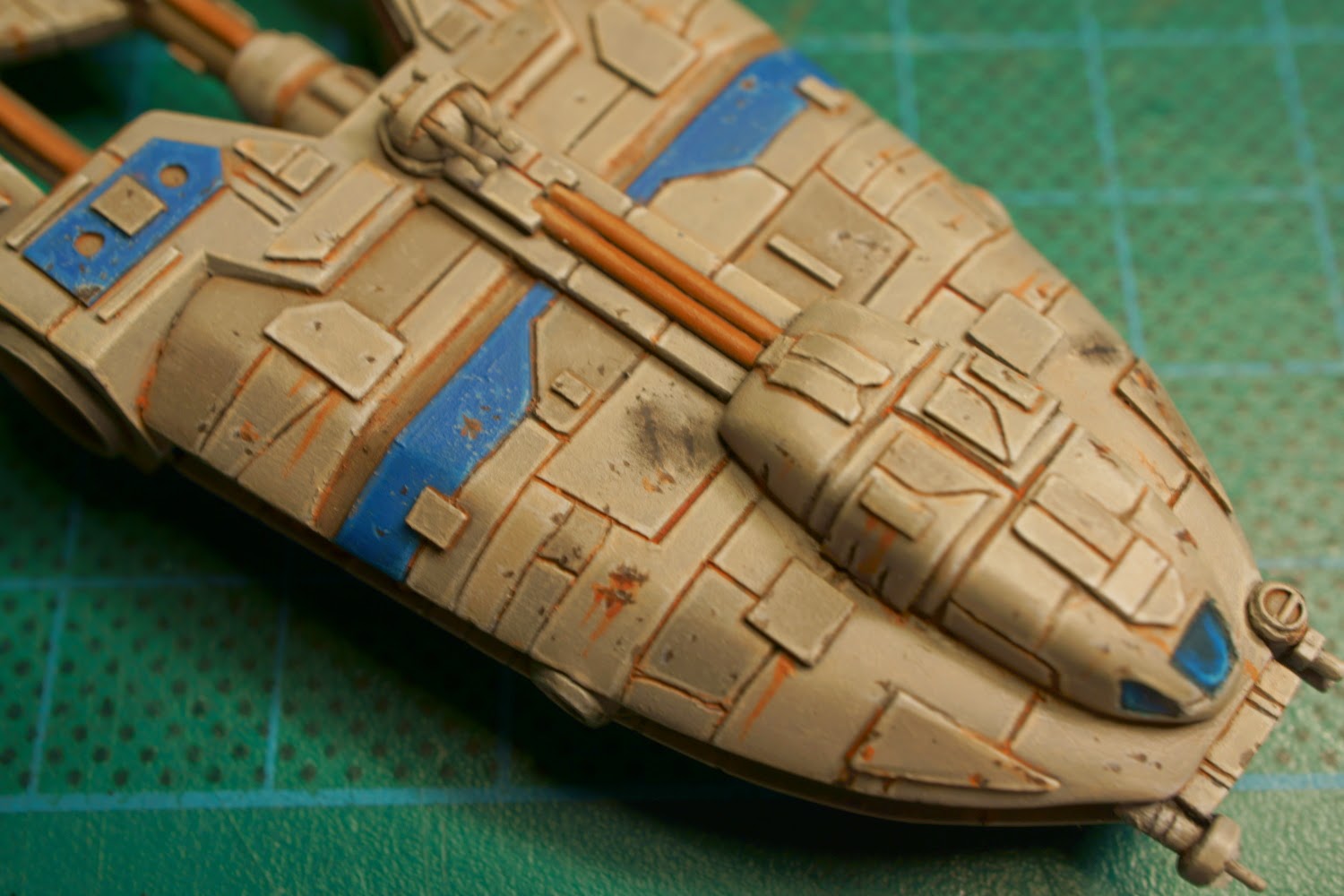 The only thing left to paint were the cockpit windows. Since I wanted to keep the theme I already had going with blue details I started with a 1:1 mix of German Grey and Enchanted Blue. To create a reflection/highlight I painted pure Enchanted Blue that I gradually added Dead white to.
I wasn't quite finished though. Since I hadn't been able to add grime as planned I knew I at the very least had to add some laser damage. To achieve this I started with a 1:1 mix of Khaki and Stonewall Grey that I painted in slightly jagged and elongated manner, as if the shots had hit from a fairly shallow angle. To simulate blackened metal I painted the same mixed used on the engines inside the previous area followed by some pure German Grey lightly dabbed in the middle. After that I took out my black dry pigments and basically stippled some the pigments on top of the area to create some carbon scoring. I used the same basic technique on the engine exhausts as well to make them look well used. Unfortunately the colour that I had originally used on the engines proved to be a bit too dark so the effect I was looking for isn't as visible as I had hoped.
Final steps was the usual matte varnish sprayed onto the model followed by some gloss varnish on the windows. Voila! Finished model! Actually the studio pictures will be published later, so you'll have to make do with this for a short while.