The Armada CR-90, as I've already explained when I posted the studio pictures, presented a new set of painting challenges for me. Just like you can't quite use the exact same techniques on an X-wing model compared to a Warhammer 40k Space Marine, something in this size (about 1/2680 scale) has it's own set of rules that needs to be observed.

A great deal of these 'rules' revolve around making details noticeable without going overboard. For instance, a comparatively fine highlight on a larger model (Let's say it's only 0.5mm wide) might look bloody gigantic on this scale. 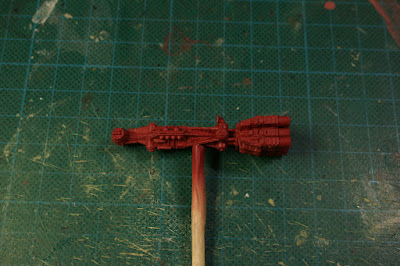 Anyway, let's get to the painting part shall we? Since it was supposed to look more or less the same as it's larger X-wing cousin, it was important to use the same colours and mixes where possible. To this end I started with a 1:20 basecoat mix of VGC Stonewall Grey and VGC Scarlett Red, the same mix that I used on the Tantive IV model. 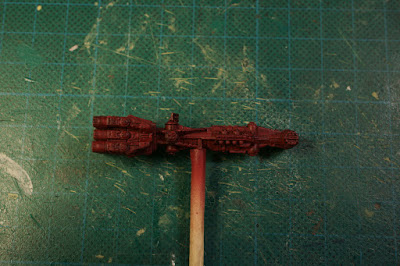 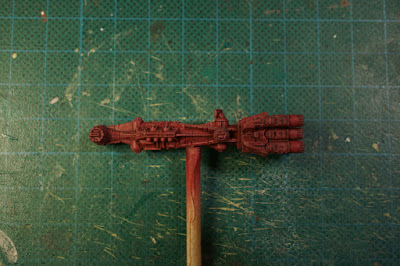 For shade I applied a slightly diluted wash using Army Painter Dark Tone ink all over the model. When this had dried completely I reapplied the basecoat mix, both by dry brushing it on and by manually painting it back in places where I couldn't reach with the drybrush.

For the first (and only) highlight the Stonewall Grey part of the mix was increased until the ratio was around 1:8 and again I started by dry brushing it all over the model. Where possible I also painted the mix as a more traditional panel highlight. 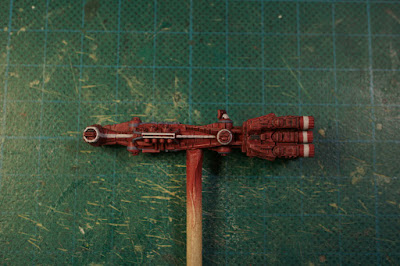 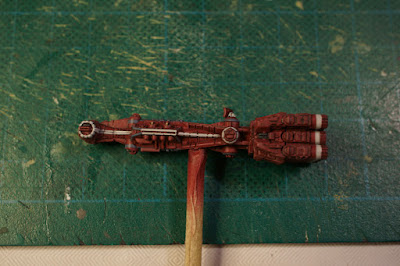 Details where next. The white markings used a 1:2 mix of Stonewall Grey and Army Painter Matte White, while the blue/grey areas were painted using pure VGC Sombre Grey. A few minor details, like a few assorted tanks and part of the top and bottom turrets, were painted with VMC German Grey. The barrels of the broadside turrets were painted using NMM gold, though to be fair it's not very visible on this scale.

These details were then shaded using more Dark Tone ink and when that had dried, the base colours were reapplied. To highlight the areas painted with German Grey and Sombre Grey, I just added  added some Stonewall Grey to both colours and picked out the details, while the white areas were highlighted with pure Matte White. 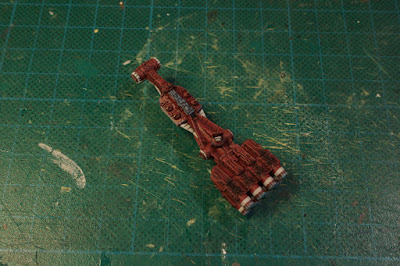 Final details were to add some smoke/dirt streaks on top of each engine using black dry pigments and add some engine glow using Matte White mixed with varying amounts of VGC Magic Blue. After that it was really just a matter of varnishing the model.
Upplagd av Macross_VF1 kl. 11:21:00