The Starbus marks the third time I have painted a 3D-printed model. While my sample size obviously isn't the greatest, the model does reinforce my opinion that 3D-printing needs to mature a bit more before it can truly compete with more traditional methods.


Of course, I have learned a few new tricks since the last time I painted a 3D-printed model. First and foremost a nice warm bath in soapy water followed by vigorous scrubbing to remove any leftover printing material.

Secondly, I spent considerable time sanding down and smoothing out as many imperfections, irregularities and hints of the printing process, as possible. Of course, due to the placements of many details and the general shape of the model, I couldn't reach everywhere. However the model is indeed considerably smoother compared to when I got it. 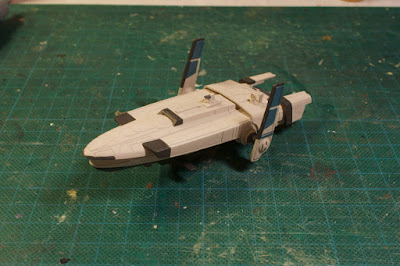 As I usually do, I started with a layer of grey primer. This was followed by a 5:1:1 mix AP Matt White, VGC Khaki and VGC Stonewall Grey. I then painted the belly and the dark detailing with a 2:1 mix of VGC Earth and VMC German Grey.

The engines and turret cannon barrels got a few coats of a 1:1 mix of German Grey and VGC Cold Grey. Finally, I painted the 'fins' with a 1:2:1 mix of VGC Turquoise, VGC Shadow Grey and Stonewall Grey. 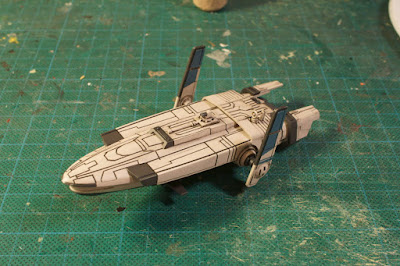 Next I shaded the model with my usual black oil wash. However during the shading process I discovered that the ship have unusually deep and wide panel lines. This led to two things. First, I had to apply a lot more wash than normally needed to cover the entire panel line. Secondly, during the cleaning process I had to be extra careful in order to not remove more than intended. 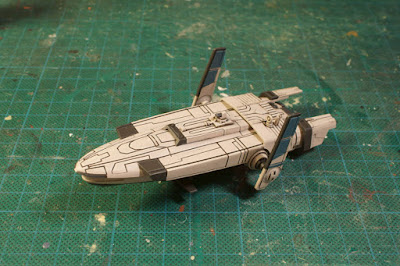 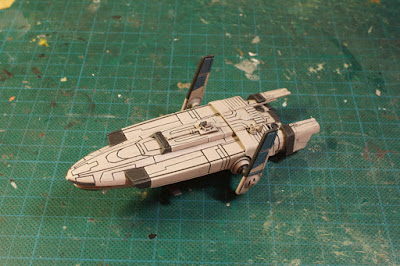 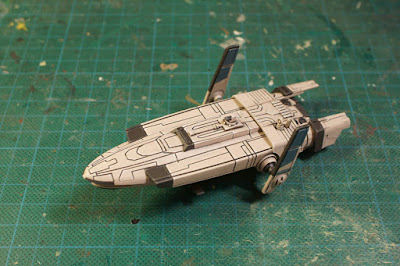 The highlighting stage at least didn't prove problematic. However I did take care not to paint my usually sharp highlights. This is supposed to be a civilian craft after all and should proba 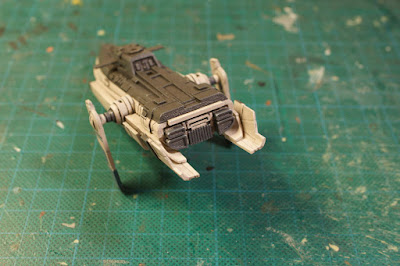 The engines and any other bits painted with the same colour was given a basic NMM treatment starting with Cold Grey, working up through Stonewall Grey and ending with Matt White. 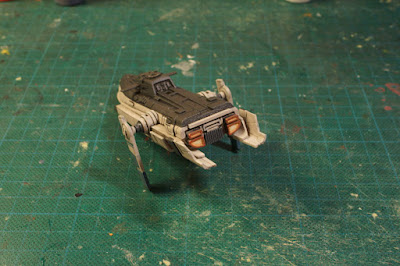 The glow for the engines was first painted using a 1:1 mix of VGC Plague Brown and Matt White. This was followed by a few thin layers in the middle of each engine, using the same colours as before, only adding small amounts of white for each layer.

The surrounding glow was simply painted by making a thin glaze using VGC Hot Orange and slowly building up layer after thin layer until I was satisfied with the effect. 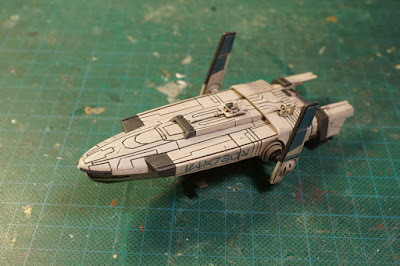 With the ship almost finished it was time to add the final touches. However, the commissioner discovered that I had made the ship a bit to dark. After a confirming that he wasn't just pulling my leg I discovered that the colour settings on my tablet didn't match the profile found on my home computer.

As I use my tablet quite a lot when painting, looking up source pictures among other things, it was no wonder that the ship was darker than intended. To remedy this somewhat I painted the entire ship with some thin glazes in order to make it brighter. It still isn't perhaps quite as bright as the source pictures but short of repainting the entire thing it was the best I could do.

With that problem sorted I could finally complete the model. The ship was weathered using my usual method though I kept it rather light. This is supposed to represent a ship ferrying passengers, and should reasonably have seen little to no combat.

The source pictures showed some Aurebesh writing on the side of the ship so I knew I had to add some of that. First I printed some decals with the necessary text and applied them to the the model. When the decals had set properly I mixed up the same blue mix that I had used on the fins and painted on top of the text. This is indeed a nice little cheat, because while I could have freehanded everything, it saves some of my already limited sanity.
Upplagd av Macross_VF1 kl. 22:42:00