Painting the TIE Shuttle was very much like the conversion from Bomber to Shuttle. Despite the apparent simplicity, it was a bit more complex than what one might first expect.


The biggest problem was the basecoat. The commissioner wanted the ship to feature a similar colour to the rest of his fleet. However, the blue/grey colour that can be found on factory painted TIEs varies quite a lot, even when just looking at other TIE Bombers. 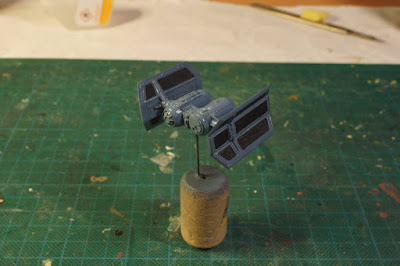 In the end I settled for replicating the factory colour found on this particular ship. Of course, this meant I had to spend some time mixing colours and after a good number of tries I ended up with a 6:6:1:1 mix of VGC Sombre Grey, VGC Stonewall Grey, VGC Ultramarine Blue and VGC Turquoise.

The above mentioned mix was applied as the basecoat on top of a layer of black primer. I picked out the solar panels with a 1:1 mix of AP Matt Black and VMC German Grey before applying a few layers of gloss varnish in preparation for the shading stage. And while I forgot to take a photo of the stage, the shade was my usual black oil wash. 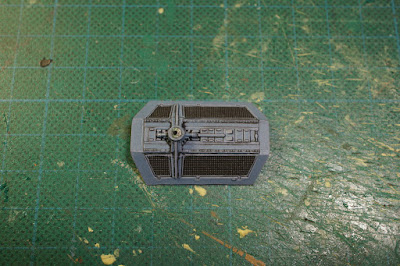 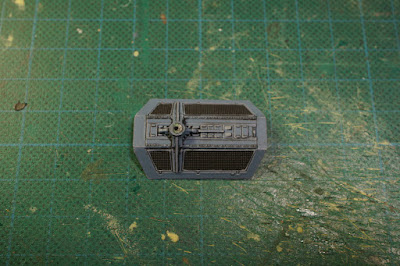 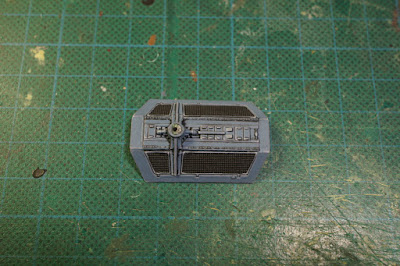 Highlighting was thankfully quite simple after the extensive research spent on the basecoat. The first layer was a 1:1 mix of Sombre Grey and Stonewall Grey. The second layer was the same colours but in 1:3 ratio. The third and final highlight was simply pure Stonewall Grey. 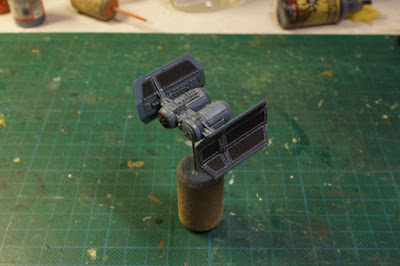 With the highlights done I could concentrate on details. The cockpit windows was painted with Matt Black while I painted the window frame with German Grey. The frame was further painted with some simple highlights using VGC Cold Grey.

The engines was painted with VGC Scar Red with a bit of AP Matt White mixed in. The surrounding glow was painted using pure, though heavily diluted, Scar Red. 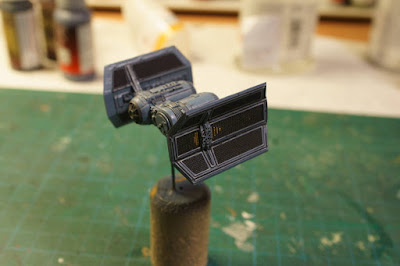 The commissioner wanted a final extra bit of detail added. Taking inspiration from my own TIE repaints, he had the idea to add similar yellow markings. These were simply painted with VGC Plague Brown, shaded several times with AP Strong Tone ink and finally highlighted using more Plague Brown with a bit of Matt White added.
Upplagd av Macross_VF1 kl. 22:41:00