While painting the CT-900 wasn't quite as difficult as building the ship, it certainly provided it own set of challenges. After all, trying to match the colour scheme of a Lego model to a scratch built 'scale' model can be quite tricky.

While the basic paint job is a fairly standard affair, the multitude of mixes utilized does raise the complexity a bit. And when I say 'multitude of mixes' I really mean it so please bare with me on this one. It's gonna be a lengthier ride than usual. 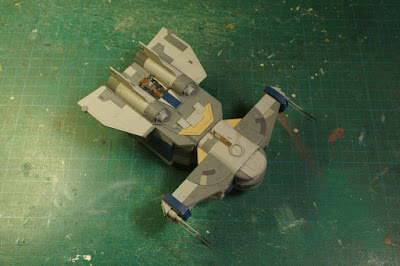 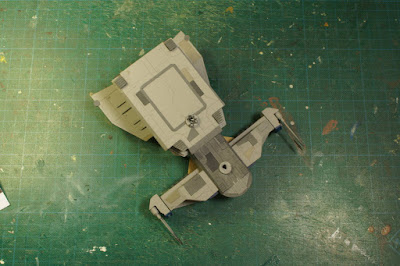 Several panels and greebles were painted in other shades in order to give the ship an older appearance, as if it had been repaired and botched together with whatever pieces could be found at hand. The dark grey panels and details used a 2:1 German Grey and Cold Grey mix, the pale yellow a 1:1 VGC Plague Brown and VGC Khaki and the beige panels a 2:3 Khaki and Cold Grey mix. 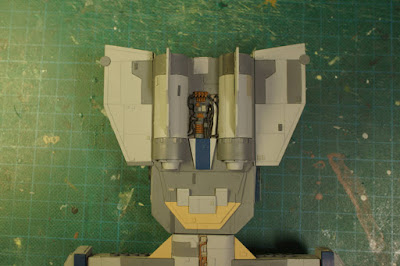 Any exposed cables were painted with a 1:1 mix of German Grey and AP Matt Black, while power conduits and a few other details was painted with VGC Beasty Brown.

I also reused some of the above mentioned 'panel' colours to pick out a few small greebles and also Plague Brown for a warning stripe around the belly hatch, one specific cable and some lights. The above picture was taken before I added these details however. 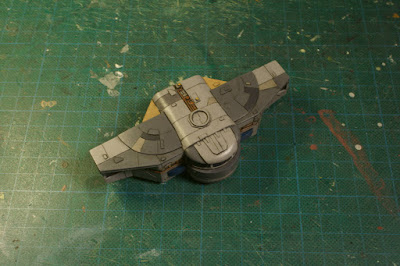 Shading used my standard method, first a layer of airbrushed gloss varnish, followed by an oil wash into the recesses and panel lines. When dry I used cotton swabs and some white spirits to remove the excess. After another 24 hours of drying I sealed the wash using some matte spray can varnish. 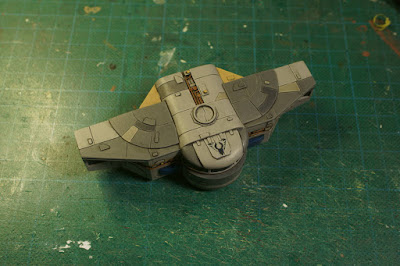 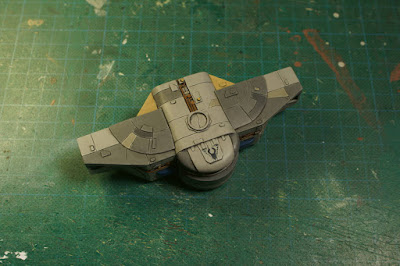 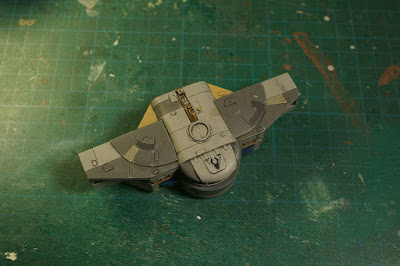 Lots of different highlight mixes was required this time due to all the different panel colours. I also painted the Freemakers logo, using a 1:1 mix of Imperial Blue and Matt Black, on the top of the bridge and on the sides of each of the fins on top of the cargo bay.

Dark Grey details and panels
Khaki
Pale yellow areas and details painted with Plague Brown
Blue details
Anything painted with Beasty Brown
As I promised at the start, that's a lot of mixes. To this I also must add German Grey to highlight the black cables and the blue base colour to highlight the Freemakers logos.

However despite this almost abnormal amount of mixes, keen eyes should already have spotted that there is only a relatively small number of colours actually used. German Grey, Cold Grey and Stonewall grey form the basis of most mixes with Plague Brown, Bonewhite and Khaki being almost as important. Using a limited palette in this way helps unify the paint job, giving a better overall impression. 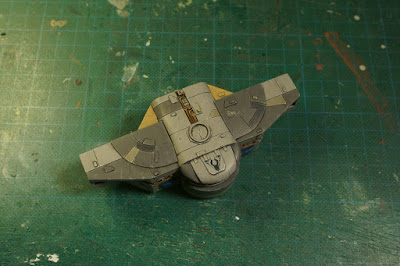 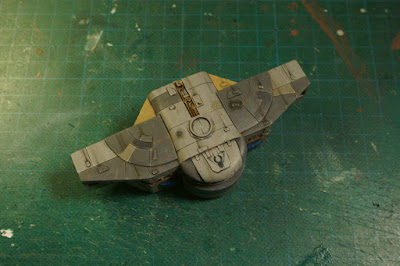 The dents, bumps and scratches were painted using my usual method. The dirt and oil streaks on the other hand were painted using oil paints. I applied small dots of black oil paint wherever I thought it would appropriate, generally greebles and dents. I then dipped a brush in some white spirits and gently dragged out the oil paint into long streaks.

I repeated the process with a dark brown oil paint called Raw Umber, only to a smaller degree. Finally, on some streaks, particularly where the base colour was dark, I painted thin lines of diluted VGC Earth in order to make the streaks more visible. 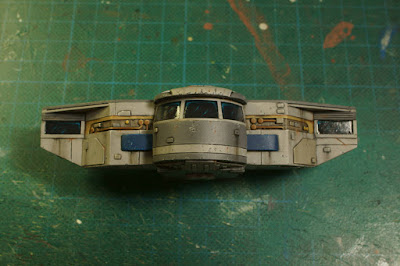 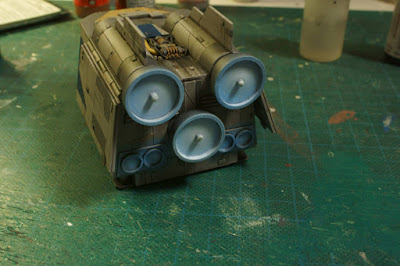 The windows were first painted with the same colour as the cables on top of the ship. I added the reflections by adding Turquoise to the base mix and slowly adding more Turquoise for each successive layer. When finished, I painted three layers of gloss varnish on the windows to give them a proper shine.

The engine glow I airbrushed directly onto the model. I first masked off any non essential surfaces and first added a thin layer of VGAir around each exhaust followed by several thin layers of VMC  Blue Fluo. I'm far from the greatest airbrush artist but it honestly came out far better than I had anticipated.
Upplagd av Macross_VF1 kl. 23:20:00